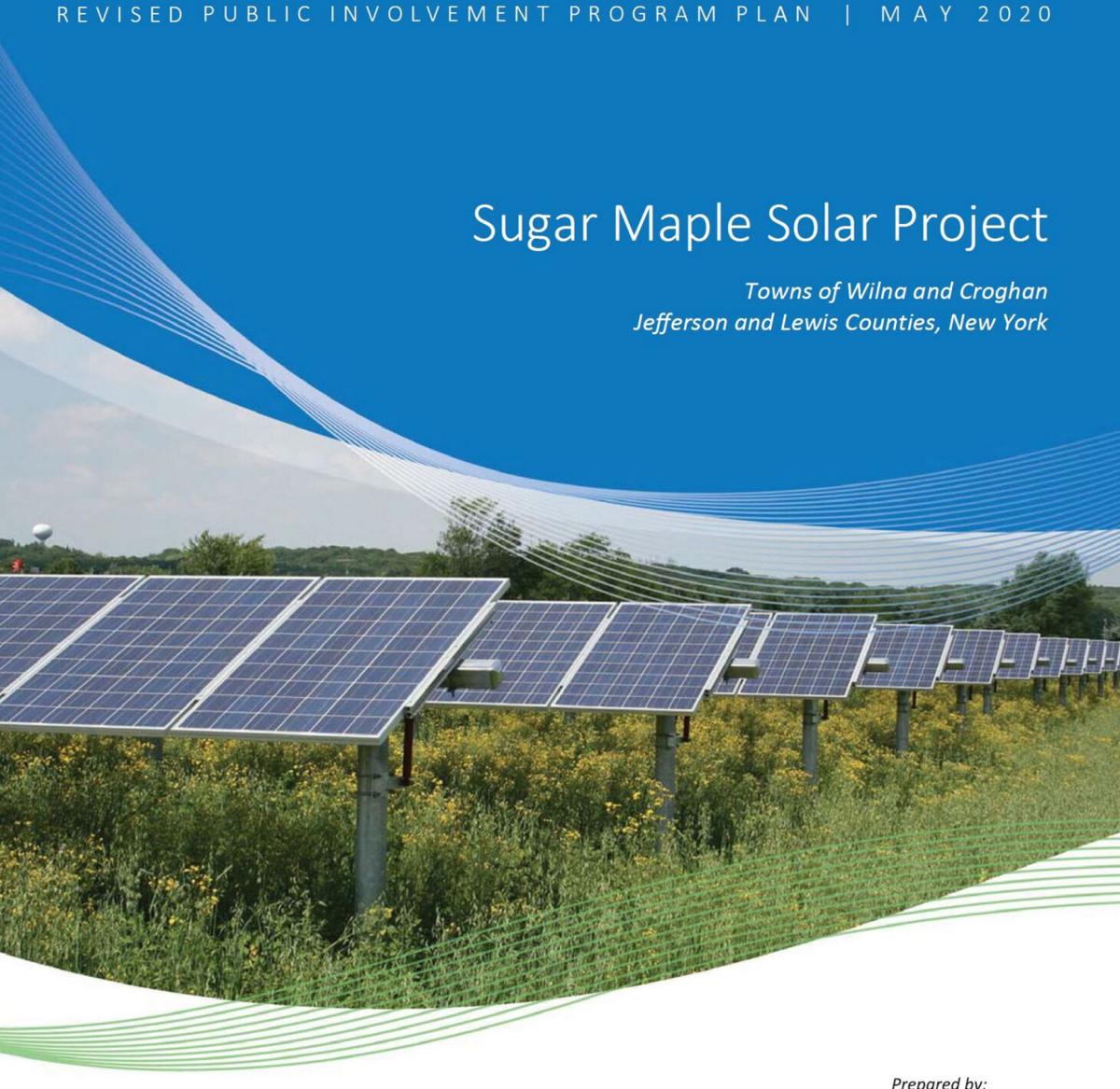 The new owner of the Sugar Maple Solar Project proposed in the towns of Croghan and Wilna will hold a virtual public information session on April 8. Contributed image 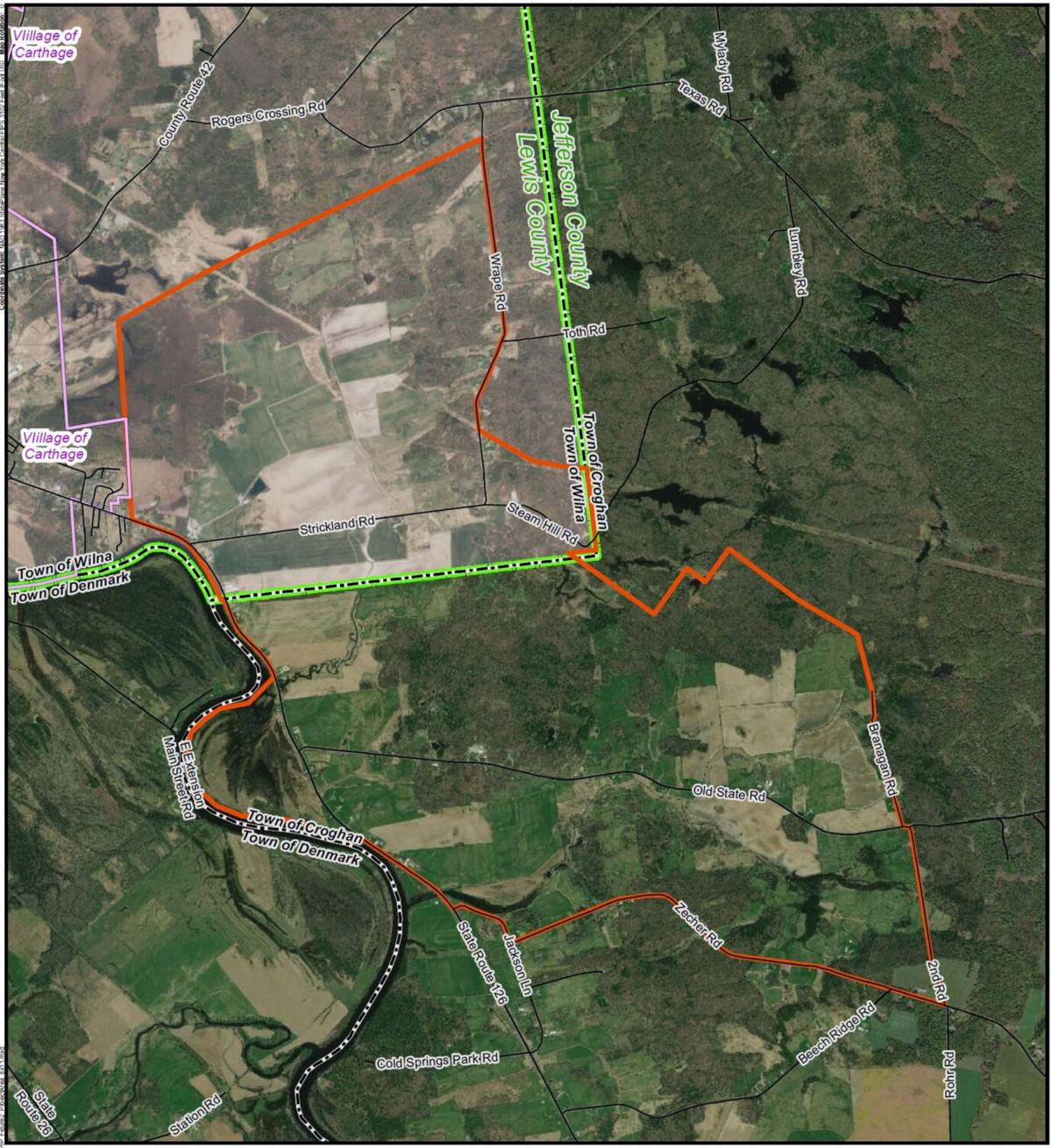 The map shown, included in the public involvement program plan, indicates the project area for the Sugar Maple Solar farm.

The new owner of the Sugar Maple Solar Project proposed in the towns of Croghan and Wilna will hold a virtual public information session on April 8. Contributed image

The map shown, included in the public involvement program plan, indicates the project area for the Sugar Maple Solar farm.

LOWVILLE — The primary opportunity for public comment on the Sugar Maple Solar Project proposed in the towns of Croghan and Wilna will be held virtually on Thursday.

Geronimo Energy, a National Grid subsidiary, was the originator of the project, which began the Article 10 process by filing a public involvement plan on March 11, 2020 with an update in May 2020. Public information meetings were also held virtually by Geronimo in May 2020.

National Grid changed the name of Geronimo to National Grid Renewables Development LLC in October and AES reported to the state Department of Public Service, which oversees the Article 10 process, that it had “acquired the assets” of Sugar Maple from that company in January.

According to the news release on the “community meeting” this week, AES will “discuss updates to the project, the transition to the 94-C permitting process and... (answer) questions about this exciting development.”

The 125-megawatt project will straddle the Jefferson-Lewis county line in the two towns and includes a 20-megawatt battery storage aspect.

It is situated about six miles from another proposed large-scale solar project owned by AES in New Bremen.

Although the initial project area under consideration envelopes more than 4,000 acres, only about 1,500 acres of that land is anticipated to be chosen to hold rows of bifacial solar panels that collect energy on both sides of the panels and will use a tracking system that follows the sun throughout the day according to the May 2020 public information meeting held virtually on the project by its previous owner.

Located on the southern edge of Wilna where it meets the northern edge of Croghan, the project area runs adjacent to the east bank of Black River and State Route 126, north of Old State Road.

The land involved is described as primarily agricultural although there are some forested parts of the project area.

The solar farm will be feeding directly into the grid through a 115 kilovolt National Grid power line that “cuts through” the project area.

The “commercial operations date” set by Geronimo was originally Dec. 31, 2023, however it is unclear if AES is going on the same timeline as there are no links to updated documents on the project’s website, nor have any been recorded in the online document depository, Matter Master, on the Department of Public Service website.

Under the Article 10 environmental certificate approval, Geronimo had planned to submit its completed application by the end of winter this year to make that operational date, although the Article 10 process was known for taking much longer than one year for approvals to be granted.

The 94-C expedited process is designed to provide approval in no more than one year once the application is complete and submitted.

Sugar Maple’s price tag is about $180 million of capital investment and is projected to provide almost $6 million in tax revenue over the 20 year life of the project.

About three or four skilled permanent jobs will be created by the solar farm and more than 180 temporary construction jobs with about 80 to 100 workers on site during the peak of construction at one time, according to the information provided by Geronimo in 2020.

It is unclear if AES will follow Geronimo’s lead by providing a $25,000 charitable fund annually for the 20 years of the project.

In response to questions asked during the May 2020 public session, Geronimo officials indicated there will be a 6-foot fence around the project as required by the relevant codes.

Within the fence, low-growth grass will be planted under panels to be mowed a couple of times every year and there will be native and perennial plantings that will require spot treatment for the first three years until they are established.

These plantings are expected to “minimize erosion effects of the project itself” and allow the soil to recover from years of agricultural use.

Construction itself is anticipated to take between six months and one year based on original estimates before AES took over.

Under the 94-C siting approval process, AES is required to have one meeting with community members no less than 60 days before submitting its application to the Office of Renewable Energy Siting.

Anyone who would like to participate in the process as an “intervenor” or a party attempting to intervene with the approval of the solar farm, can apply for funding within 30 days of the application filing.

The AES website for the project indicates the company plans to continue to follow the public information plan created through the Article 10 process, which would mean continued dialogue with the communities surrounding their projects even after the basic requirement is met.

While no new documents have been recorded on the DPS documentation Matter Master page for the project since the Feb. 25 notification of the change to the new siting process, one area resident filed a comment on the proposed solar farm on March 31 asking a number of questions about community benefits from the project, the impact on nearby landowners and their property values, what kind of fencing would be used, whether or not they will be able to access cheaper energy through the project, panel maintenance and disposal and whether or not there would be tree or shrub removal for the project build.

“I along with many others in the proposed area were not informed first hand of the project,” the comment made by Justin Hall began. “I am in full support of green energy, but I feel large scale projects such as this have less benefit for the surrounding homes unless you are the individual leasing the land.”

Anyone interested in attending the meeting from 5:30 to 6:30 p.m. must go to the project website www.aes.com/sugar-maple-solar-project and click the registration link after which registrants will receive a confirmation email with instructions about how to join the meeting.