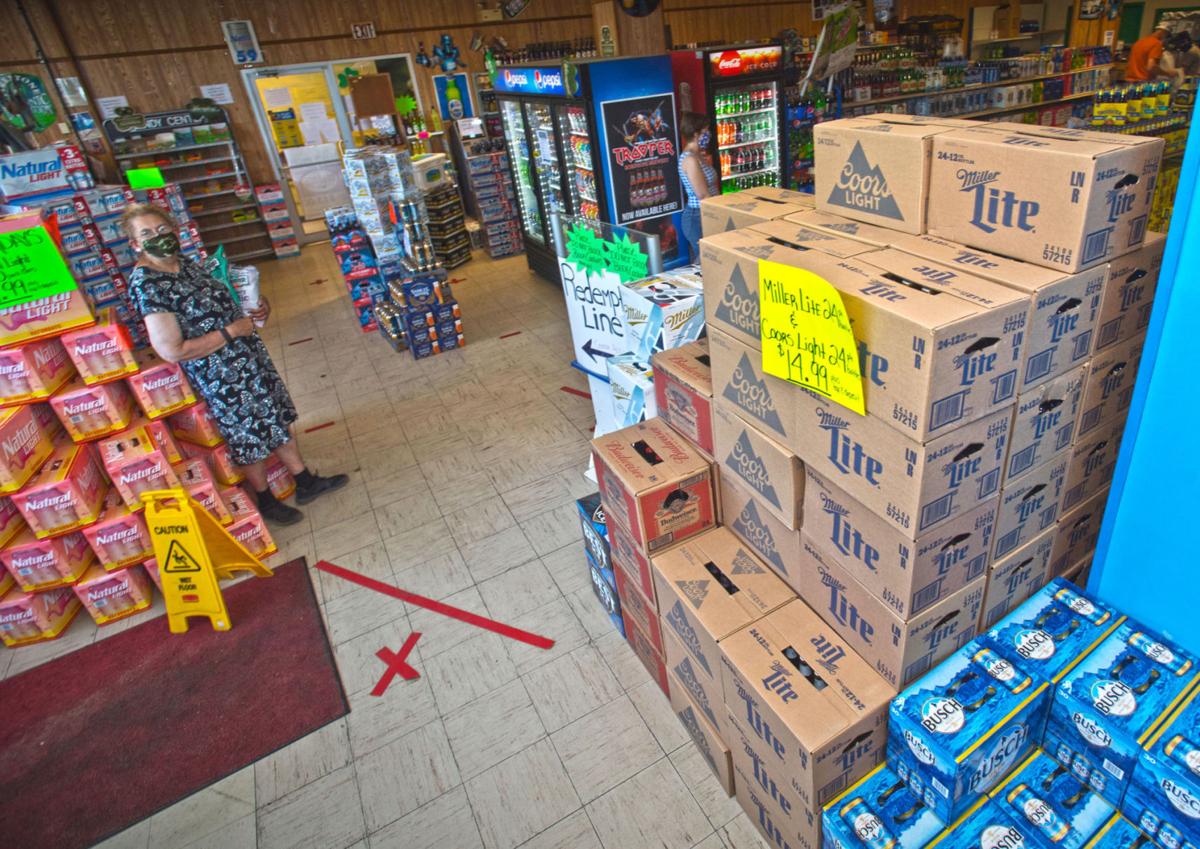 A patron of Griff’s Beverage Center on Market Street, Potsdam, examines a stack of surplus brown boxed bar beer on Wednesday that a distributer has left for retail sale. Christopher Lenney/Watertown Daily Times 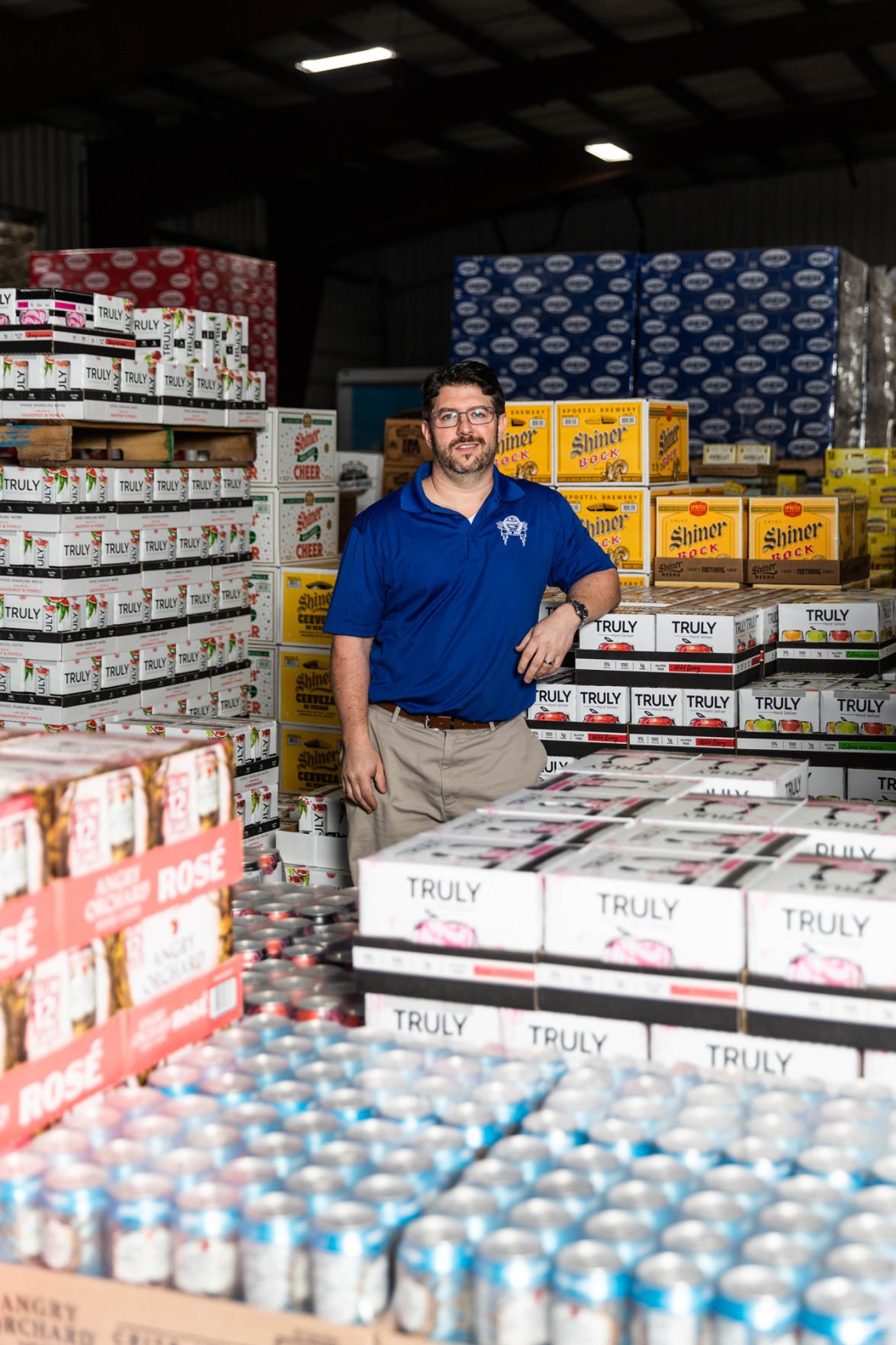 Dave Missert Jr., owner of AJ Missert Inc. in Watertown, said his company immediately canceled all of its incoming draft keg orders after the food-service industry closed midway through March due to the COVID-19 pandemic. Sydney Schaefer/Watertown Daily Times

A patron of Griff’s Beverage Center on Market Street, Potsdam, examines a stack of surplus brown boxed bar beer on Wednesday that a distributer has left for retail sale. Christopher Lenney/Watertown Daily Times

Dave Missert Jr., owner of AJ Missert Inc. in Watertown, said his company immediately canceled all of its incoming draft keg orders after the food-service industry closed midway through March due to the COVID-19 pandemic. Sydney Schaefer/Watertown Daily Times

WATERTOWN — Two local beer distributors sent nearly 1,000 kegs back to their suppliers to be thrown out, which made them question when to order more and resulted in some restaurants having a difficult time acquiring draft beer.

An estimated 10 million gallons of draft beer across the country — which is tens of thousands of kegs — has is now at risk or flat-out spoiled, and the north country is not immune. In March shortly before restaurants and bars closed, the beer industry was gearing-up for occasion-based events like St. Patrick’s Day, the NCAA Tournament and Spring Break. But when the stay-at-home orders took hold, beer just sat in brewers, distributors, retailers and stadiums. And the shelf-life for beer is somewhere between 90 and 180 days depending how it’s stored.

When April came around and the shutdown continued, some retailers and distributors started sending their beer back to suppliers and received a partial or full credit. Some even converted their dying beer into hand sanitizer, which can be done if the water is burned off from it.

And now, the process of moving beer from supplier — small and large brewers — to distributor to retailer has been flipped on its head.

“Beer flows one way,” said Lester Jones, the chief economist with the National Beer Wholesalers Association. “Brewers, distributors and retailers are really good at moving beer in one direction. What happens now is we have to reverse that flow, and logistically that’s really complicated and it’s really expensive.”

As a result, some restaurants in the north country that opened outdoor dining in recent weeks, or others that opened at half-capacity a week later, have been scrambling to keep their taps full.

Alan Taylor, owner of Old Homestead Restaurant in Alexandria Bay, opened his patio dining area around three weeks ago. A section of his indoor dining, which could open, is set to have 16 taps when renovations are done to it. Even if it did open, he would likely have trouble filling all 16. He usually buys from AJ Missert Inc. in Watertown, however he said the distributor was forced to dump hundreds of his kegs. He said he got lucky and found six kegs at another local company, Eagle Beverage.

“After they shut down all the bars and restaurants, Missert’s now has this warehouse full of keg beer that wasn’t going anywhere,” he said. “Nobody used any, so it just sat. I ended up having to take whatever Eagle had sitting at the warehouse.”

Dave Missert Jr., owner of AJ Missert Inc., said his company immediately canceled all of its incoming draft keg orders after the food-service industry closed midway through March. But the kegs already in their warehouses were running out of life.

“It does have a shelf life,” Mr. Missert said. “There’s nothing we can do about that.”

Over the next three months, between Missert distribution in Watertown and its sister company in Ogdensburg, the two have sent around 900 kegs of beer back to their supplier for them to dispose. The supplier gave the Missert company partial credit for sending them back, and Mr. Missert said they still had to eat a percentage of what was returned.

“Still,” he said, “it pales in comparison to what all the bars and restaurants have lost over these last three months.”

Mr. Missert said he didn’t know when to order more kegs because he didn’t want those to sit in his warehouse as well. It became a guessing game to an extent.

“No one really knew when they would open back up,” he said. “And there was no real direction on when this was going to happen.”

Now that the food-service industry seems to be on its way to reopen, Mr. Missert said he would have inventory coming in a few days.

“I hope that it can get normal real soon,” Mr. Missert said. “I just want these bars and restaurants to get back to doing the business they should be doing, and to get people back to work.”

Others haven’t had as much trouble getting beer. Of the eight different brands on tap at the Clipper Inn in Clayton, only one was not available, said the chef and owner Mike Simpson. The inn opened on Friday at half capacity.

“It felt so good to be like a restaurant again,” Mr. Simpson said. “I feel like we have a pretty safe environment. I feel really good about it.”

Allen Chilton, owner of Coach’s Corner in Massena, said he opened at half capacity on Monday. He said it’s been an adjustment with social distancing, but he hasn’t had an issue with getting kegs, which he buys from Massena’s A Cappione Inc.

The owner, David Cappione, said he has sent around 180 kegs of Bud Light and Natural Light back to his supplier, which refunded the distributor at cost.

He’s never had to send kegs back unless they were damaged, he said, highlighting the uncharted territory he and others were in over the last few months.

“How do I order my kegs?” Mr. Cappione said. “You want to take care of people but how do you predict the unknown? It’s a double-edged sword.”

He said he keeps lower overhead of kegs on hand at any given time, which could contribute to the amount he has sent back. What has been lower are craft beer kegs have been low for Mr. Cappione.

“How would you like to be in their shoes?” he said of smaller breweries. “How many kegs can they make because they don’t know when I want them.”

Mr. Cappione said his business has been lucky. Even though his number of accounts have reduced by over half, he said business is actually almost up for the year.

“The stores have been booming,” he said. “It’s boredom I think.”

He said his business sold more beer the first week the stay-at-home order went into effect than they usually do during the Fourth of July holiday.

“Isn’t that crazy?” he said. “It’s been a different, strange type of business.”