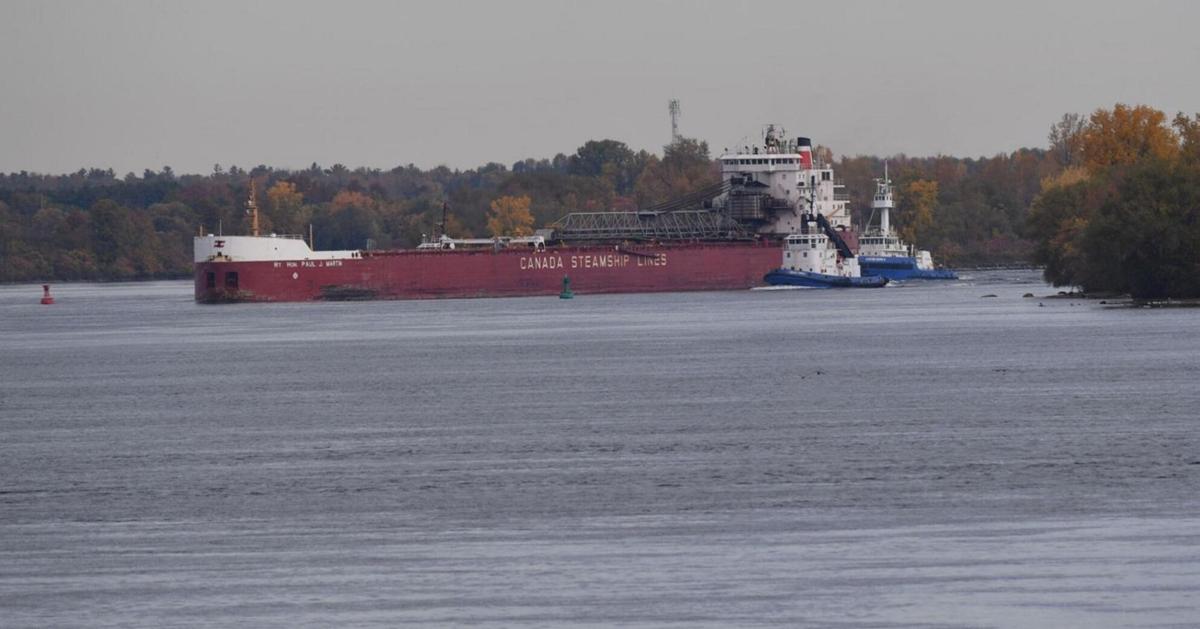 The Rt. Hon. Paul J. Martin, a 740-foot vessel loaded with iron ore and fuel, is freed from its grounding in the St. Lawrence River in 2019. Christopher Lenney/Watertown Daily Times 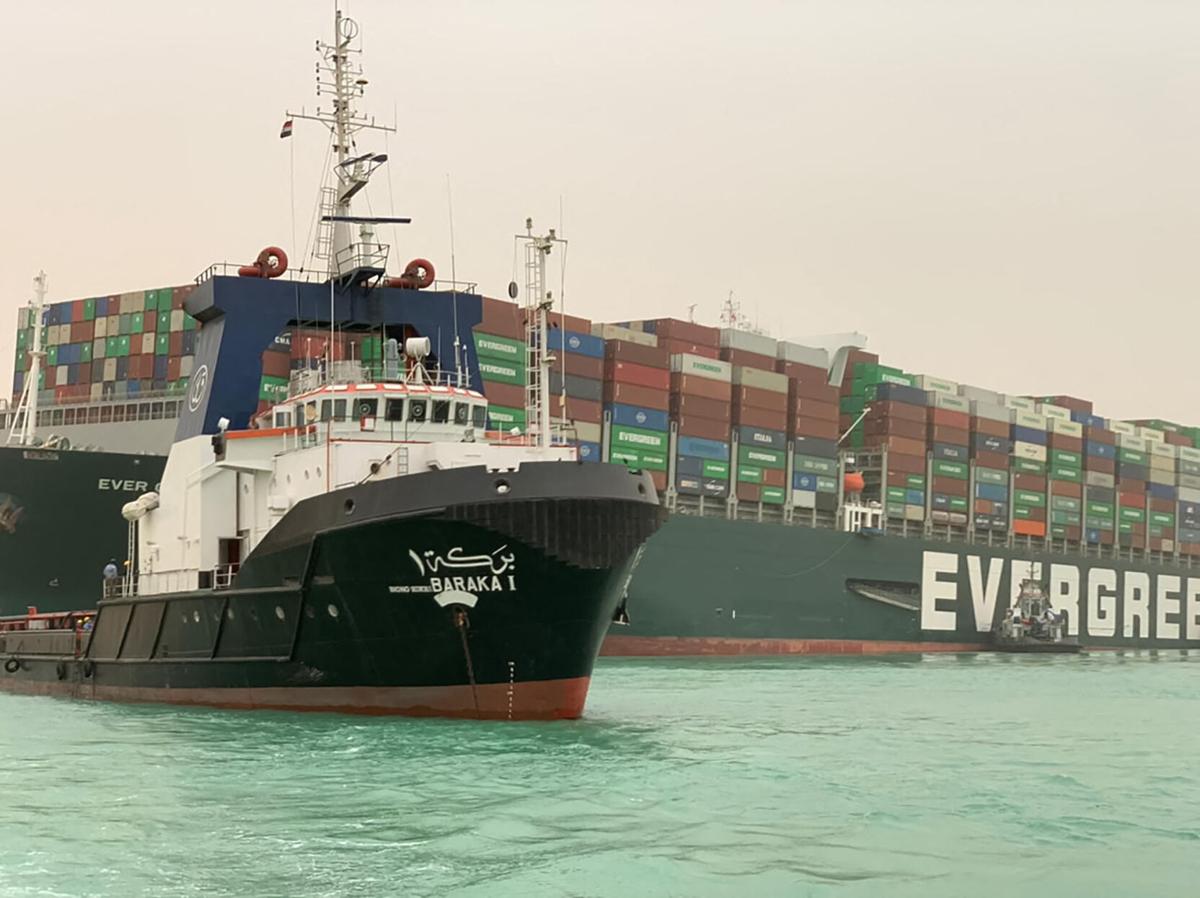 This giant container ship ran aground in the Suez Canal on March 24, bringing marine traffic to a halt along one of the world’s busiest trade routes. Suez Canal Authority/Getty Images/TNS

The Rt. Hon. Paul J. Martin, a 740-foot vessel loaded with iron ore and fuel, is freed from its grounding in the St. Lawrence River in 2019. Christopher Lenney/Watertown Daily Times

This giant container ship ran aground in the Suez Canal on March 24, bringing marine traffic to a halt along one of the world’s busiest trade routes. Suez Canal Authority/Getty Images/TNS

Sidebar: There was once talk of extending St. Lawrence Seaway to Watertown

WATERTOWN — The St. Lawrence Seaway System, a series of locks, canals, and channels in the U.S. and Canada that stretches for 2,340 miles, is …

Recent events in the Suez Canal drew worldwide attention to the fact that when a cargo vessel goes sideways in a shipping channel, it can cause big problems.

Similar scenarios are not unheard of much closer to home.

On Dec. 2, the freighter Harvest Spirit ran aground in a Detroit River channel, on the Canadian side, about 19 miles south of Detroit. Harvest Spirit experienced some sort of engine failure and started drifting.

“She ended up sideways in the Livingstone Channel,” said Eric Peace, spokesman for the Westlake, Ohio-based Lake Carriers’ Association.

The Detroit River, for 24 nautical miles, links Lake St. Clair (between Ontario and Michigan) to Lake Erie as a strait in the Great Lakes system. The river divides the metropolitan areas of Detroit and Windsor, Ontario.

Residents along the St. Lawrence Seaway may have had a glimpse of the Harvest Spirit. Michael Folsom, founder of the Seaway Ship Watchers Network, said it’s a new fleet vessel of Canadian-based McKeil Marine. The former Maltese-flagged ship, previously the Juliana-White, was built in 2012.

“It will be frequenting the Seaway in the future, especially being based out of McKeil Marine in Hamilton,” Mr. Folsom said.

All eyes were on the cargo container ship Ever Given and the worldwide supply problems and backlogs it caused, but the Harvest Spirit acted as a reminder that shipping on the Great Lakes and the St. Lawrence River does involve some delays.

Ships stall or become grounded occasionally in the St. Lawrence Seaway system and are freed within hours or a couple of days.

In October of 2019 off Cardinal, Ontario, after nearly seven days in a St. Lawrence Seaway rut, The Rt. Hon. Paul J. Martin, a 740-foot vessel loaded with iron ore and ship’s fuel headed to Quebec City, was freed from its grounding. Several tug boats assisted the effort, as did the removal of an estimated 5,000 metric tons of iron ore from the vessel onto awaiting barges to lighten the load. The Seaway in the vicinity of Galop Island was closed to all vessel traffic during salvage operations.

She added the Seaway had one of the safest navigation seasons on record last year.

“Over the last 25 years, the average number of vessel incidents in the Seaway has decreased significantly,” she said.

Shipping, Mr. Folsom said, runs the risk of disaster, much like trains, planes and automobiles.

“Sometimes they can’t be avoided and the consequences affect many,” he said. “While we await the results of an investigation of the Ever Given incident, one has to take into account the circumstances associated with potential power failures and/or excessive winds. The same can be said for ships on the Seaway.” For example, Mr. Folsom said that a head-on collision in the Welland Canal of July of last year is waiting results of an investigation. The canal connects lakes Erie and Ontario.

“Harvest Spirit’s sister ship, Florence Spirit, suffered significant damage in that incident, which led to a temporary stoppage on the canal,” he said.

The Ever Given ordeal drew massive attention because of the lifeline it shut off, Mr. Folsom noted.

“If the Seaway saw something similar, the lasting effects on the steel industry and farmers alone could have impacts on North American trade and production that would ruffle the economy,” he said.

A 2018 economic impact study on the Great Lakes/St. Lawrence Seaway system by the Great Lakes Seaway Partnership, found that if the region was its own country, it would be the third largest economy in the world with a combined GDP of more than $6 trillion.

With a limited shipping season, time is money for shipping companies and the businesses that rely on their products.

“We operate the U.S. flag fleet between (lakes) Superior, Michigan, Huron and Erie,” said Mr. Peace of the Lake Carriers’ Association. “But it’s important for everybody to understand that this is a system and it’s literally like a highway, like your New York State Thruway. If you get stuck in one area where you’re not at an exit, you are going to be stuck there for a while until whatever blockage is removed.”

The “confining points” in the system range from the Soo (sometimes spelled Sault) Locks that enable ships to travel between Lake Superior and the lower Great Lakes to the Seaway system itself.

“Those are choke points where things could literally be shut down and commerce would halt,” Mr. Peace said.

The Seaway system is connected by five short canals. They include 15 locks, filled and emptied by gravity. Ships measuring up to 740 feet are routinely raised to more than 590 feet above sea level, as high as a 60-story building. The ships are twice as long and half as wide as a football field and carry cargoes the equivalent of 25,000 metric tons.

In response to questions from the Times, Seaway officials said its safety record can be attributed to several factors, including:

n The implementation of a consolidated U.S.-Canadian Enhanced Ship Inspection Program in Montreal in 1997.

n Skilled professionals including pilots, vessel officers, and crews, and a major fleet renewal program implemented by many of the Seaway’s customers.

On March 22, the Baie St. Paul was the first ship to pass through St. Lambert Lock in Montreal, officially marking the start of the 63rd navigation season of the St. Lawrence Seaway.

The main issue causing shipping delays in the Great Lakes, Mr. Peace said, is ice — or rather delays each year in breaking it up to allow shipping.

Mr. Peace said that in 1979, the U.S. and Canadian Coast Guards had 20 icebreakers stationed on the Great Lakes. That number has dropped to 11 over the past 40 years. Nine are operated by the U.S. and two by Canada.

“The Great Lakes often lose one of the two Canadian icebreakers stationed here to the St. Lawrence during the spring and early winter before the Seaway opens/closes, which only strains the limited icebreakers on the lakes,” he said.

Where there is ice in late winter Mr. Peace explained, money and time are lost.

“We see it annually,” Mr. Peace said. “And this is what people don’t understand: When we have ice conditions that are severe, we lose days. We have delays which are just as costly as we saw in the Suez Canal.”

“It wasn’t severe by any standpoint,” he said. “It was a pretty normal one and we had delays that cost the industry over a billion dollars.”

Mr. Peace said that the lack of adequate icebreaking has created negative economic impacts in the Great Lakes in three of the past six years. He said that in 2014, the steel industry was crippled in the spring when critically low iron ore stocks were not replenished at the blast furnaces on the lower Great lakes due to a lack of capable icebreakers.

“Just think about that billion dollar impact,” he said. “We’re not even talking about high-valued goods. We’re talking things like iron ore, limestone and cement. Things like that we call the building blocks of America are being shut down and it’s costing them a billion dollars. That just tells you how much delay you’re getting.”

The delays, caused by ice, Mr. Peace said, are seen “just about every year.” He recalled his duty aboard the USCGC Mackinaw in 2013 and 2014.

“We were escorting vessels across Lake Superior from Duluth to Sault Ste. Marie, which normally takes about 24 hours,” he said. “It took us 11 days because of the ice conditions and the fact that there was only one ice breaker out there.”

There is some limited cargo shipping in winter on the Great Lakes.

“It’s mostly Canadian,” Mr. Peace said. “Stuff like road salt is moving and heating oil that goes between Sarnia, Ontario (on Lake Huron) and Sault Ste. Marie. But for us, it’s pretty much shut down because we can’t get above the Soo Locks. Once the Soo Locks close, you can’t access the iron ore from Minnesota or the upper peninsula of Michigan.”