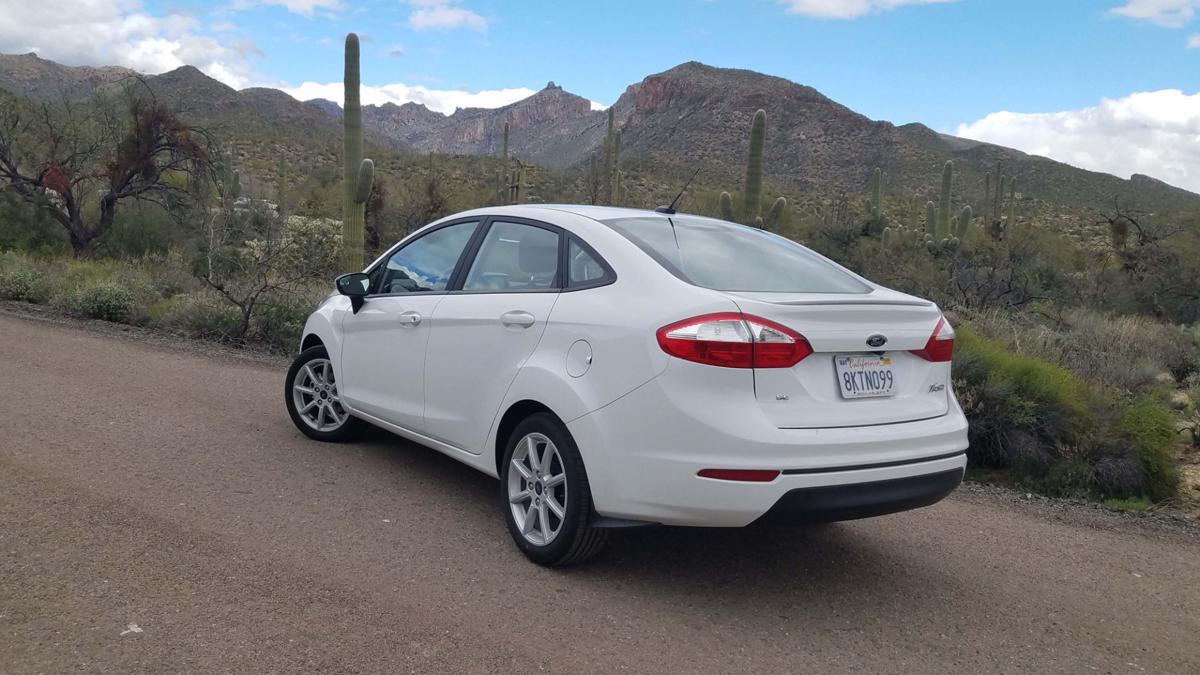 The 2017-2019 Ford Fiesta SE is good looking coming and going. And with its tight chassis, it’s fun to drive when the roads get twisty. Henry Payne/The Detroit News/TNS 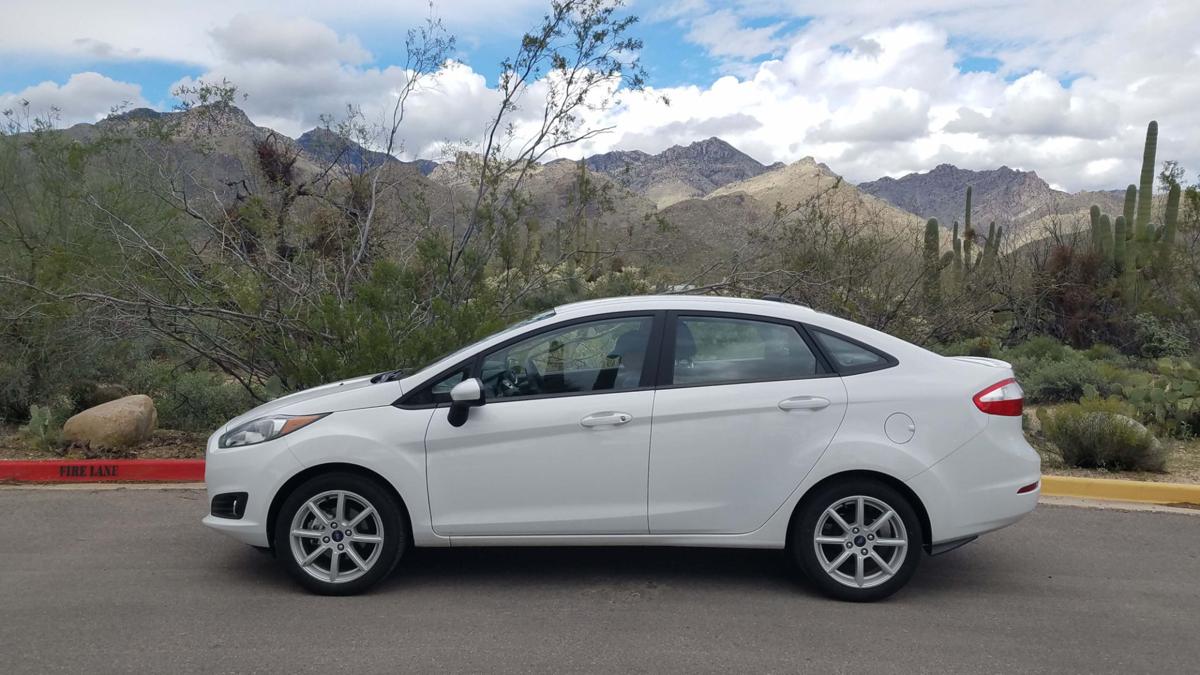 The 2017-2019 Ford Fiesta SE gets alloy wheels, which are good looking — and affordable on a $10k used car. Henry Payne/The Detroit News/TNS

The 2017-2019 Ford Fiesta SE is good looking coming and going. And with its tight chassis, it’s fun to drive when the roads get twisty. Henry Payne/The Detroit News/TNS

The 2017-2019 Ford Fiesta SE gets alloy wheels, which are good looking — and affordable on a $10k used car. Henry Payne/The Detroit News/TNS

DETROIT — I miss the Ford Fiesta. But that doesn’t mean I can’t have one.

Ford makes some of the best cars on the planet, but, under pressure from America’s turn to SUVs (and small sales margins), it stopped Fiesta and Focus production for the U.S. market last year. Want a car? Buy used, says Ford.

The Fiesta subcompact cutie is one of the best bargains out there on used — er, pre-owned — car websites. Nimble. High-tech. Priced under $10,000. And that’s a good thing in these budget-sensitive coronavirus times. Michigan’s shelter-in-place order allows online selling. Let’s go shopping.

My wife and I rented a 2019 Fiesta sedan in Arizona earlier this year and had a blast. This tasty tamale was the last model year offered for the U.S. market — and the same car introduced in 2017 with two significant updates that put it right in my strike zone: Apple CarPlay/Android Auto app compatibility and alloy wheels.

The alloy wheels are the perfect complement for the subcompact class’ best-looking car. Crisp European lines, guppy grille, and ... oooh, those eyes. Like Elizabeth Taylor’s Cleopatra, the Fiesta’s big peepers are huge — stretching all the way back to the A-pillars. This is an affordable car you can wake up to every morning and admire.

Apple CarPlay and cousin Android Auto have transformed automotive infotainment systems in recent years, allowing mainstream cars superior nav systems to those found in some $60,000 luxury cruisers. My wife set our destination on her smartphone, plugged into the 8-inch infotainment system, and we were off.

I’ve been in the market for numerous, sub-$10K used chariots over the last couple of decades and can attest to the fact that Honda and Toyota cars are consistently pricier than their Detroit peers. Credit Japanese reliability, which helps maintain value. Look no further than Ford’s recent problems with Fiesta’s dual-clutch automatic transmission that, ahem, ultimately led to a $30 million class-action lawsuit settlement.

But here’s the thing: Ford has agreed to fix the transmission for free for the relevant 2011-16 model years. Or you can buy an upgraded 2017-19 model. Or you can just bypass the automatic transmission and opt for one of the finest six-speed manuals in the business (a rarity in the market today). Either way, you win.

And either way, you can find 2017-and-newer Fiestas with less than 50,000 miles (my personal target for a used car) for less than 10 grand on Cars.com. That’s a steal.

Especially because you won’t find a comparable Honda Fit or Toyota Yaris for that price. Look it up. The only available Fit and Yaris competitors I could find under $10K within 250 miles of Detroit were older than 2016 — meaning they are technologically challenged compared to the gaggle of 2017 Fiestas available.

Fit didn’t get Apple CarPlay until the 2018 model year. Yaris until this year.

The Fiesta SE came equipped with the original blind-spot assist — Ford’s clever, mirror-within-the-side-mirror solution that allowed me to safely monitor my blind spots. Locate a 2018-and-newer model and it’ll have a standard back-up camera, too.

My Fiesta rental was a sedan, but I prefer the hatchback, which was priced $300 higher new. The used market doesn’t seem to notice a difference — so get the hatch for its superior looks and utility.

The interior of the Fiesta is as sporty as the exterior. A big, motorcycle-like instrument display lurked behind the steering wheel as I easily folded my 6-foot-5-inch frame into the cloth seats. Pity the six-footer behind me, though — the Fiesta’s rear seats are tight.

The cockpit is carefully engineered with big control buttons and knobs within easy reach. Along with the big instrument gauges, it’s driver-friendly.

As I barreled along — the 120 gerbils (er, horses) under the hood screaming away — I could keep my eye on the road between the big gauges and infotainment screen high on the dash. Interior designers even shielded the screen from the bright Arizona sun with a shroud. Smart.

Back in 2014, my favorite Fiesta engine was the 1.0-liter, turbocharged three-banger — Godzilla in a box — that got insane fuel economy while also producing three more horsepower than the standard, 1.6-liter 4-banger. Alas, it was discontinued for the 2018 model year as its $1,000 premium must have spooked segment buyers.

Still, my 1.6-liter posted an impressive 434 miles of range with a full tank. That’s more than a $40K Lincoln MKC.

Despite my lead foot, the Fiesta got excellent fuel economy — an important attribute for penny-pinching consumers shopping for sub-$10,000 cars. EPA rates the Fiesta for 30 mpg, but Mrs. Payne and I managed 35 over a variety of highway, city, and country roads. On Interstate-10 South between Phoenix and Tucson I consistently got 40 mpg-plus when cruising at 80 mph. That’s impressive — especially for this Tesla electric-vehicle owner who is used to seeing range crater over 70 mph.

One of my wife’s favorite movie scenes comes from “National Lampoon’s Vacation.” Chevy Chase — aka, Clark Griswold — is pushing his Wagon Queen Family Truckster station wagon past 80 mph when his wife breaks his reverie: “SLOW DOWN!”

I have been similarly admonished. But Mrs. Payne also knows the joys that personal transportation brings to motorheads like me. So does Ford.

In addition to its good looks, Fiesta will never bore. With its short wheelbase and taught chassis, the subcompact is a mini-party on wheels — tempting drivers to push the limits when beyond the city limits.

Lacking is power, but 120 horses will keep novice drivers out of trouble while they learn the joys of driving. The Fiesta SE will impress. And when you get a little more money in your wallet — and a thirst for better acceleration than Fiesta’s glacial 9.1 seconds zero-60 crawl — you’ll return to the used lot and check out what more Ford has to offer.