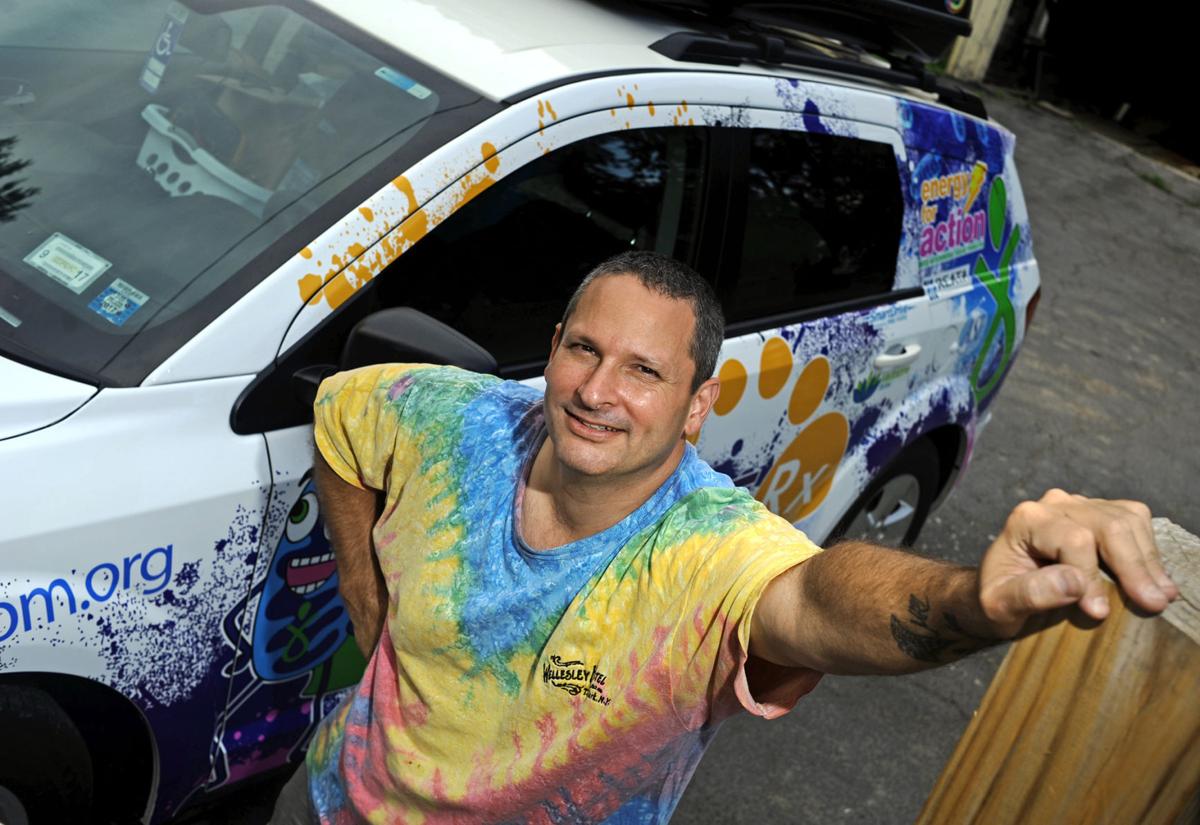 Andrew G. Williams, just before embarking on a trip across country, despite suffering from debilitating health problems. Watertown Daily Times 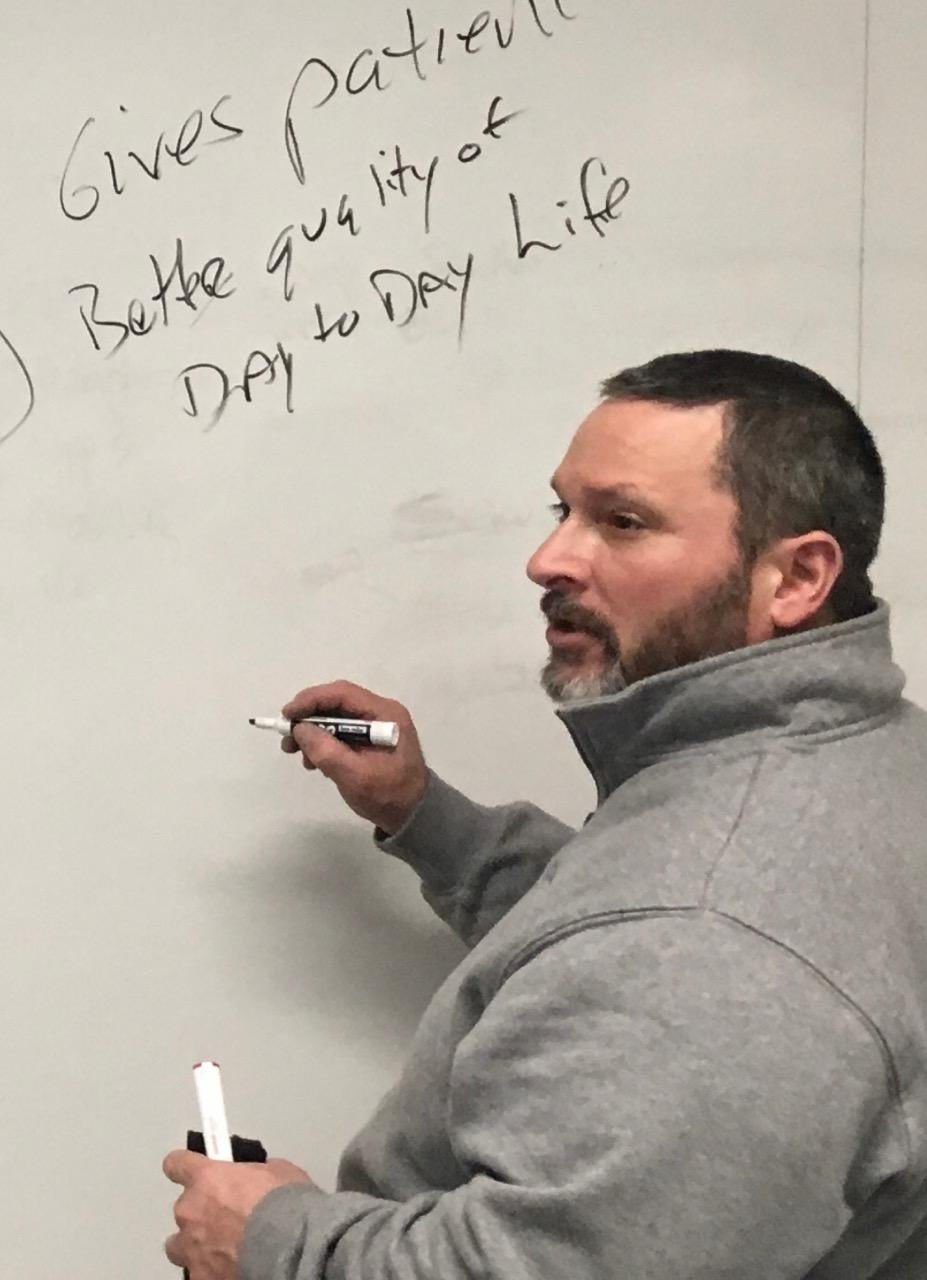 Watertown native Andy Williams has invented a medical device that could help 500,000 Americans who are forced to use feeding tubes. He’s worked with the Cleveland Clinic on the project. Submitted photo by Andy Williams 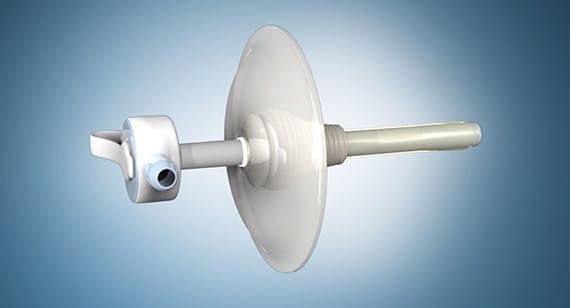 This is the medical device that Watertown native Andy Williams invented to help people who use feeding tubes. Submitted photo

Andrew G. Williams, just before embarking on a trip across country, despite suffering from debilitating health problems. Watertown Daily Times

Watertown native Andy Williams has invented a medical device that could help 500,000 Americans who are forced to use feeding tubes. He’s worked with the Cleveland Clinic on the project. Submitted photo by Andy Williams

This is the medical device that Watertown native Andy Williams invented to help people who use feeding tubes. Submitted photo

Andy Williams was on his way home from one of his many camping trips in the Adirondacks when he came up with an idea that changed his life.

Suffering from a rare nerve disorder for years, Mr. Williams was prone to getting infections from the feeding tube that he uses to help treat his illnesses.

The Watertown native was frequently going to the emergency room for infections, caused by leakage from feeding tubes. It often resulted in hospitalization.

In current practice, a feeding tube is surgically placed directly into the digestive tract, but the tube is prone to significant leakage. Highly acidic fluids can irritate and injure patients. Leakage also can make social lives difficult, preventing patients from living a normal life.

But Mr. Williams, a former Watertown resident who moved to Cleveland, Ohio, two years ago so he could be close to the treatment he needs, invented a device that protects the opening in the abdomen, called a stoma. The medical device has kept him from the many trips to the hospital that had become a part of his life.

“My life changed the day I made it,” Mr. Williams said. And it could help 500,000 patients on feeding tubes in the United States, according to the Cleveland Clinic, which has been involved in developing the device.

The invention could also make him a very rich man. He hopes the device will be marketed within the next year.

Mr. Williams, 49, an avid camping enthusiast and hiker, was diagnosed with mitochondrial disease, a chronic debilitating nerve disorder that leads to muscle weakness and pain, seizures and gastrointestinal issues. An estimated one in 4,000 people suffer from the progressive, incurable disease.

Over the years, he underwent several surgeries at the Cleveland Clinic, where he was treated for the nerve disorder, bladder failure, digestive problems and Alstrom syndrome. Usually beginning in infancy, the syndrome is characterized by a progressive loss of vision and hearing, and a form of heart disease that enlarges and weakens the heart muscle. Only 900 adults have been reported worldwide with the syndrome.

His illnesses became so debilitating that a big section of his large intestine was removed, leaving him unable to eat. The almost sole source of his diet comes from an energy formula that he gets through a feeding tube.

But his health condition didn’t stop him from enjoying the outdoors. Despite warnings from his doctors that he could die, he’s gone on numerous camping trips to the Adirondack mountains.

In the summer of 2018, Mr. Williams completed a lifelong dream to travel across country that lasted about three months. Traveling with his cousin Steven A. “Stevie” Williams, 62, who moved to Naples, Fla., 44 years ago from Watertown, they drove 20,000 miles in Mr. Williams’s 2016 Dodge Journey to visit the country’s best known national parks.

But it was that drive from Lake Placid in October of 2017 that changed his life forever. When he got home, he went straight to work on the idea that night. He tried it on himself. It worked.

“It just clicked in my head,” he said, adding that his days working as a plumber helped him come up with the idea. “It was like an epiphany.”

He called his doctor at the time, Dr. Eric Blumrosen, about the device, but the doctor of internal medicine warned him to be careful. Dr. Blumrosen was concerned that it wasn’t tested and it could end up harming him, the doctor remembered.

He had Dr. Blumrosen promise to keep the device a secret. The device also changed the doctor’s life. While he no longer could be Mr. Williams’ physician, Dr. Blumrosen became his partner in the venture.

“I didn’t know him that long and he was my doctor for a short time, but I felt this special connection with him,” Mr. Williams said. “I felt really comfortable with him. I lost a doctor but gained a partner.”

They worked together on the project and called some gastroenterology specialists at the Cleveland Clinic to get them involved in the device. The hospital’s Cleveland Clinic Innovations’ team also became interested in developing it.

“It could make people’s lives easier so they don’t have to go through what Andy has,” Dr. Blumrosen said. “Andy is an amazing guy.”

It’s been a long process to get to this point. It took more than a year to get a patent on the device. So far, the Cleveland Clinic has spent about $500,000 on developing the device.

Concerned that the technology could be stolen by competitors, few details have been released about the device. However, the device protects the stoma by forming a side seal around the opening in which the tube is asserted. It limits the motion of the tube, so the tube is more comfortable, reduces irritation and significantly improves quality of life.

The problems with leakage caused embarrassing situations for Mr. Williams. The acidic fluids often leaked into his clothing and he had to change his shirt several times a day, he explained.

“It cost me less than $2 to put it together,” Mr. Williams said.

The product could have other uses, such as for chest tubes and tractotomies, as well, he said.

While the Cleveland Clinic owns the patent and the intellectual property, Mr. Williams and Dr. Blumrosen will share 40 percent of its royalties, even after he dies, the Watertown native said.

If the device reaches its potential, Mr. Williams thinks he “could be a rich man.”

He’s already thinking about his legacy and what he can do for the community. He plans to put together an endowment that would provide funding for community organizations and for medical treatment for those who suffer from Alstrom syndrome and the nerve disorder he’s been stricken with.

On disability from his job at a concrete company, Mr. Williams was first stricken in 2007.

In 2016, Mr. Williams nearly died from one of his infections. His entire body was septic and had to be transferred by an emergency medical jet to Cleveland, where he was treated.

Mr. Williams, who grew up on East Division Street on the city’s north side, believes his illnesses were caused by the pollutants dumped decades ago at the former New York Air Brake Co. plant off Starbuck Avenue.

In 1995, the state Department of Environmental Conservation dredged Kelsey Creek and removed contaminants and soil. The DEC believes it has eliminated the pollutants and they never got into the ground, so residents’ complaints of health problems never were proven.

He dropped his interest in pursuing legal action and, instead, has focused on his personal life.

Along the way, the Cleveland Clinic has been there to help him with his treatment. He credited Watertown native Dr. Delos M. “Toby” Cosgrove III, the renowned heart surgeon and retired CEO of the Cleveland Clinic, with making sure he got whatever he needed.

These days, he gets to Watertown every so often to see a few friends who still live here. A former neighbor on Washington Street, Darren J. Duffany says, with everything he’s gone through, that his friend deserves the positive changes that’s been the result of the invention.

“Nobody should go through what has happened to him,” Mr. Duffany said.

Mr. Williams watched a female friend with lung cancer suffer the indignity of having to be on a feeding tube.

It had an effect on him and ended up a contributing factor in wanting to come up with something, so others didn’t have to go through the ordeal, Mr. Duffany said.

She died three years ago.

These days, the former Watertown resident hopes to see more changes in his life.

While staying in Florida on business, he met a gastrologist from Venezuela he’s been dating. She understands the medical issues he’s had to endure,

He’s thinking about making a life in Florida with her.