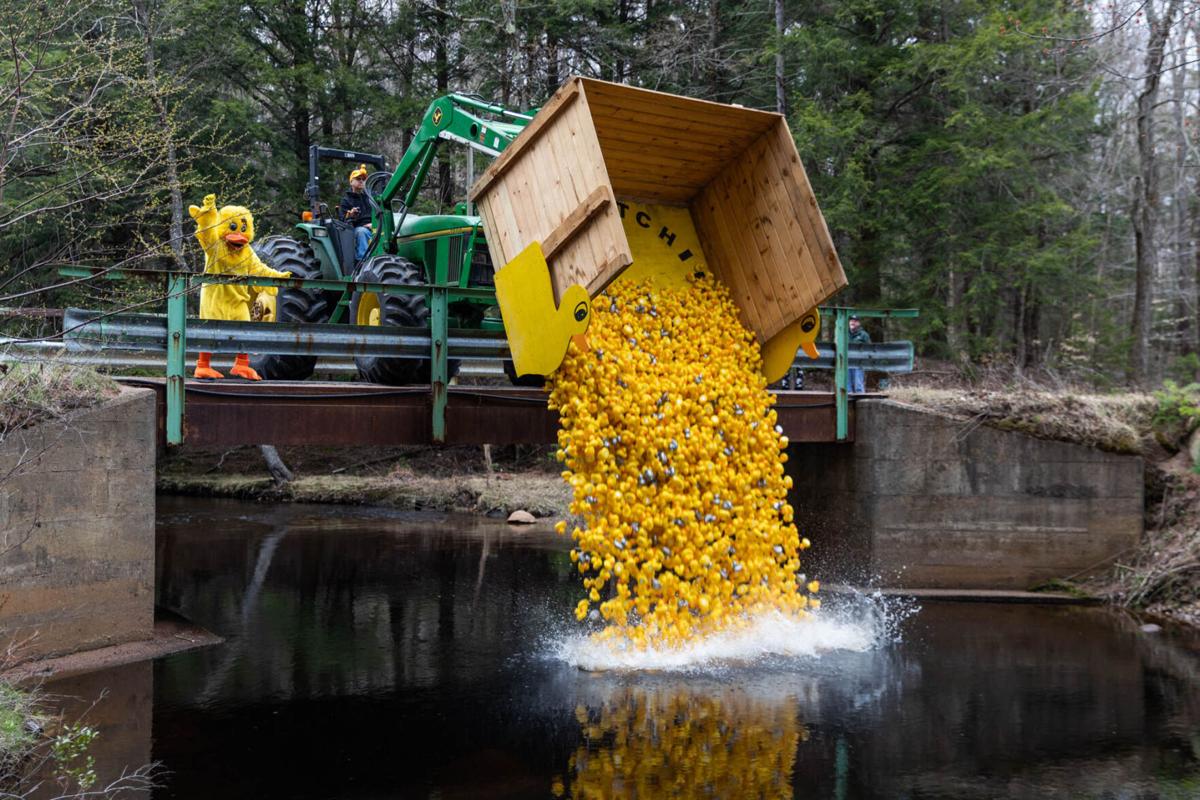 A total of 3,651 rubber ducks are dumped into a shallow waterway Sunday morning to kick off the 27th annual AdironDuck Race at Oswegatchie Educational Center in Croghan. Sydney Schaefer/Watertown Daily Times 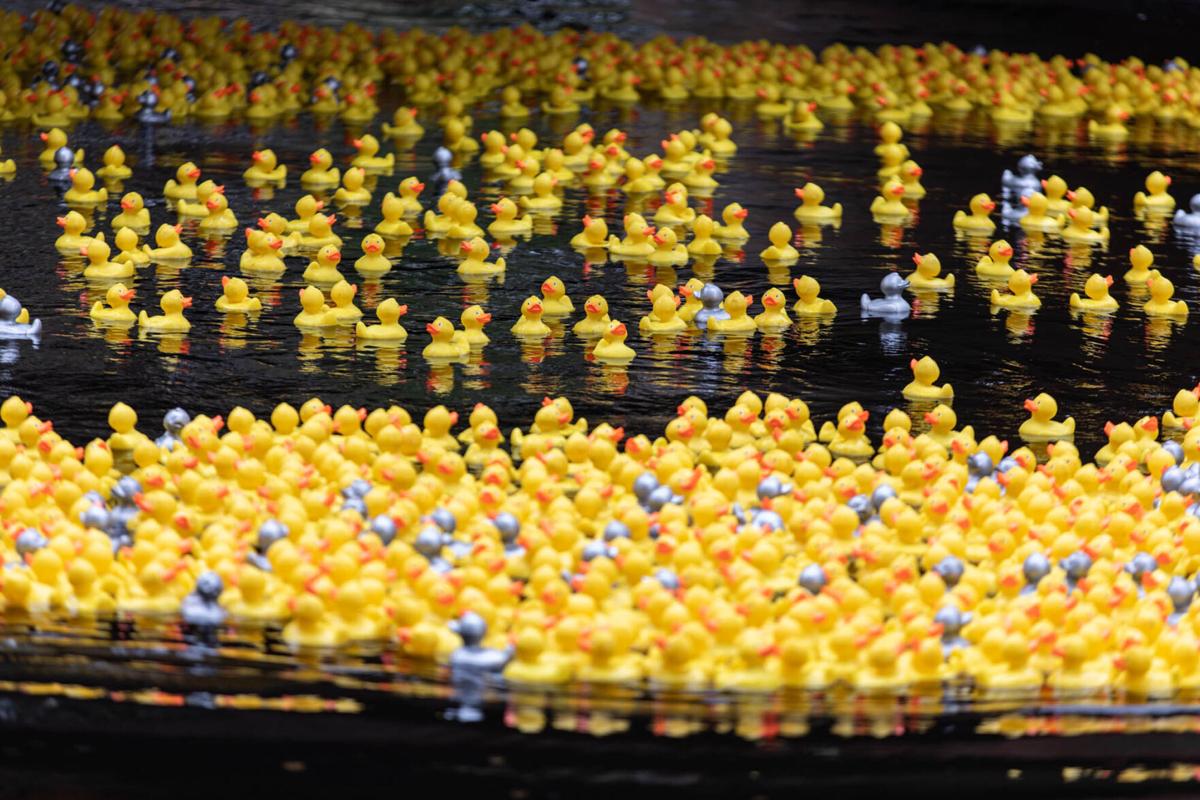 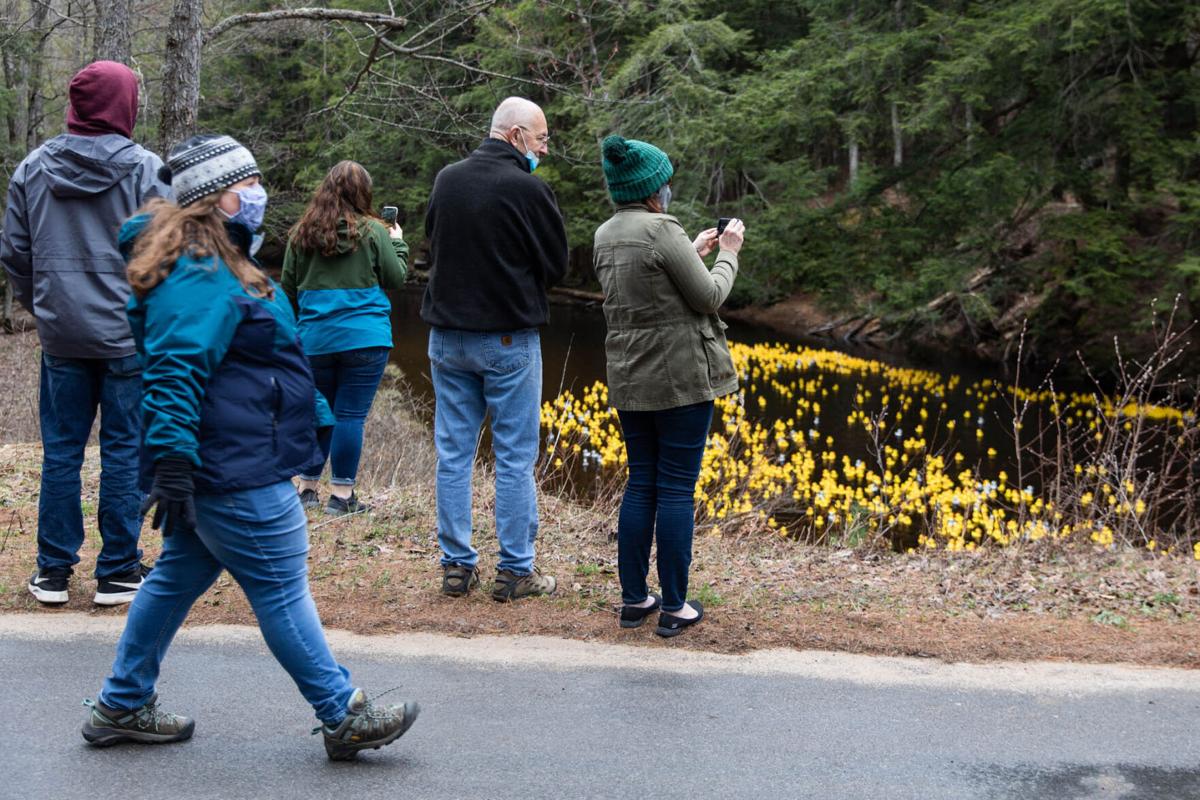 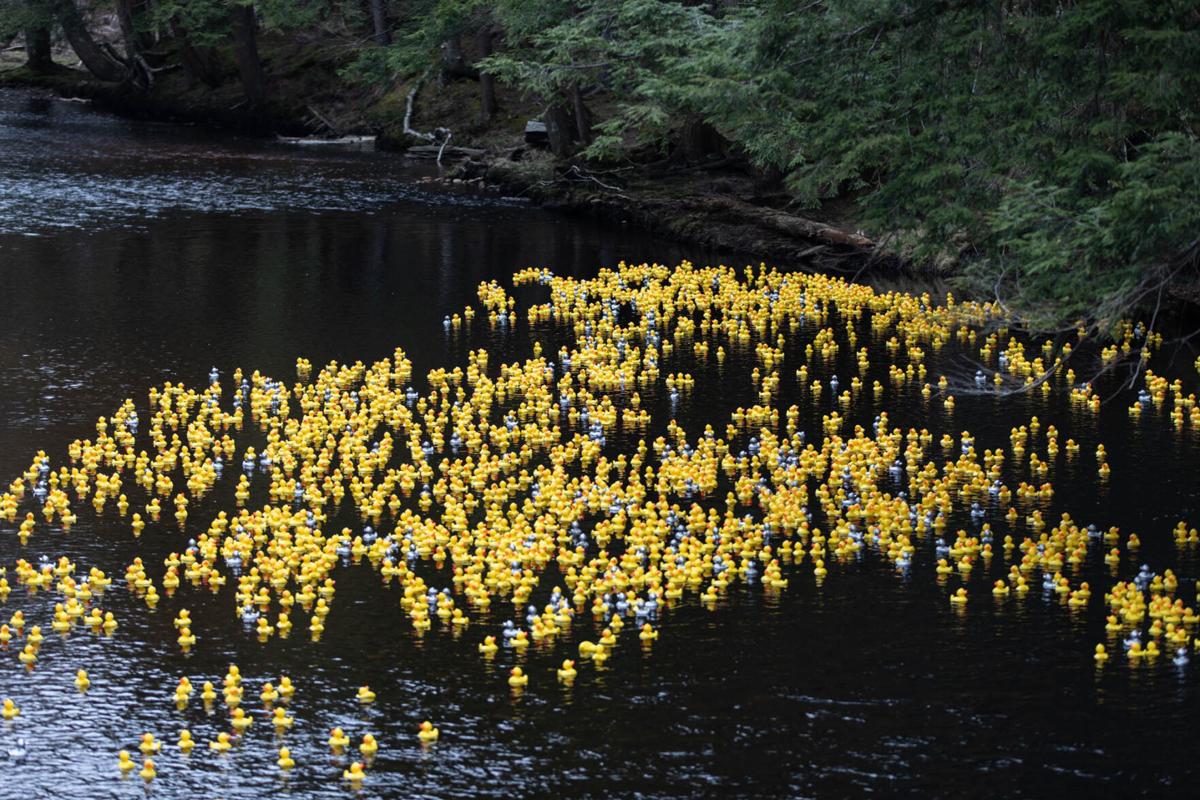 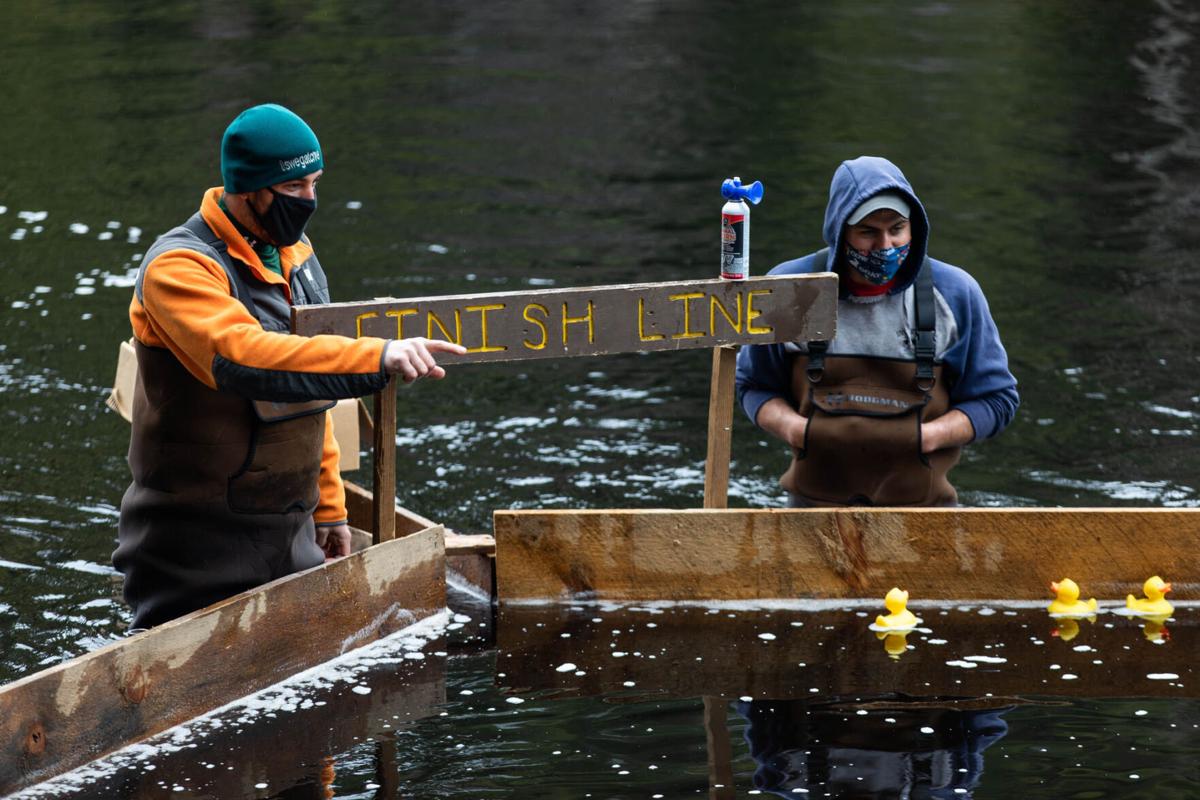 CROGHAN — In contrast with the gray Sunday morning sky, more than 3,000 bright yellow — and some silver — rubber ducks were dumped into a shallow waterway off Long Pond Road at Oswegatchie Educational Center. It marked the start of the camp’s 27th annual AdironDuck Race.

Most ducks leisurely made their way toward the finish line, but one yellow duck — number 1,280 — seemed to make winning its mission.

Mr. LaFave and his family, upon learning of his win through the camp’s Facebook Live event feed, donated $1,000 of the prize money back to the camp.

Mr. LaFave wasn’t present at Sunday’s event as only a small crowd gathered around the Long Pond Road bridge to watch the duck dump.

Nicole LaFave, Mr. LaFave’s wife, said the family was surprised to hear his name announced as the winner. The couple’s daughter attends the camp almost every summer, and Mrs. LaFave, a schoolteacher in Stockbridge, said she personally has seen the good that Oswegatchie Educational Center can do for kids who attend its summer camp. She said they had always talked about donating any money they may win from the race, which they enter annually.

“It was immediate, there was no discussion,” Mrs. LaFave said of their decision to donate half the prize money.

Most attendees wore rain coats and boots. One person even wore a yellow duck costume. They all crowded around the bridge at 10:59 a.m. to watch a tractor, parked in the middle of the bridge holding a wooden box, adorned with painted yellow ducks, dump a total of 3,651 rubber ducks into the water.

Once the tractor dumped the mass of bath toys into the creek between Long Pond and Rock Pond, the crowd slowly followed them down the creek. Currents in the dark, shallow water knocked some ducks back against the brush-covered shoreline and a team of wetsuit-clad kayakers followed a ways behind to ensure no ducks were forgotten or stuck.

Roughly 10 minutes later, the first of the batch rounded the final corner and were slowly carried toward the wooden boards meant to funnel them to the finish line.

“The first to the board isn’t necessarily the winner,” Mr. Lighthall said, narrating the recording he would publish on the camp’s Facebook page for all the viewers at home.

He was correct; a snarl of ducks caught at the finish line, seemingly stuck for a moment before one made its way through — number 1,280.

This year was the second socially distant AdironDuck Race hosted by the camp due to the ongoing COVID-19 pandemic.

“We never thought we would do two of these anti-social events in a row,” Oswegatchie Educational Center Executive Director Todd Lighthall said to supporters Sunday morning over Facebook Live, “and we are anxiously waiting for 2022 when we can welcome all of our supporters back.”

Every year since 1994, a somewhat similar scene has played out in the Adirondack Park camp. Mr. Lighthall said that at its peak, the event has drawn roughly 2,000 people. Staff and volunteers from across the country come together with visitors and families from around the region to celebrate the opening of the camp and to put on one of its largest annual fundraisers.

“It’s really like the first festival to celebrate the camp reopening for the year,” Mr. Lighthall said.

But that all changed when the pandemic hit last year.

This year’s race, much like last year, was markedly different than in the past. Because of the pandemic, the camp didn’t promote or invite visitors to this year’s race. The usual pancake breakfast and accompanying games and activities, which typically carry on all day, were called off. The only attendees were the roughly 50 volunteers who came to run the race and prepare the camp for the summer season.

“It’s better than last year,” Mr. Lighthall said. “We only had about 10 people here in person last time.”

This year, more volunteers were able to make it to the event, including Rick Hunyadi and Kate Downes. Mr. Hunyadi, who traveled all the way from Maine to volunteer with the camp, has been a volunteer at the camp since 1997 after years of visiting as a child.

“This race has definitely grown,” he said. “I remember when we were just dumping a cardboard box of ducks. It’s certainly gotten bigger since then.”

There were 3,651 ducks in Sunday’s race, each one sponsored by a donor. Most of the ducks — 3,376 of them — were the usual yellow rubber duck, which could be purchased for $10. The remaining 275 were silver and went for $50 each. The camp sold out of silver ducks this year.

Last year, the camp broke its record for the number of racing ducks sold as all 10,000 available were bought. Even though this year’s turnout was smaller, Mr. Lighthall said the camp is seeing just about the same amount of revenue in part because they raised the price for yellow ducks from $5 to $10.

“Because of the turnout last year, we decided to raise the price a little,” he said. “We knew there would be slightly less turnout because of that.”

The camp took in about $50,000 from this year’s AdironDuck Race, according to Mr. Lighthall, not counting other donations made during the fundraising push. Mr. Lighthall said that the smaller celebration this year, without the usual free games and activities, means more of that money is going to the camp as well.

“It’s kind of a silver lining,” he said.

The fundraiser’s proceeds will be used to help students who couldn’t otherwise afford to attend FFA camps, like the Oswegatchie Educational Center, as well as stocking the camp itself for the summer season.

Ms. Downes, a volunteer who has traveled from Central New York to help with the seasonal opening every year since 2000, said despite the absence of the usual celebration, coming back to the camp this year still felt as special as it always has.

“It’s like a family reunion,” she said. “The relationships we’ve built here have lasted lifetimes. Most of the volunteers are former staff, so we all worked closely together.”

She said, after being unable to volunteer at the camp last year, this year’s smaller event was a good stepping stone back to normal life. But she’s still anxious to see all the normal traditions return soon.

Mr. Lighthall said he expects to host the AdironDuck Race and all the accompanying festivities as normal again next year.

“We’re looking forward to it,” he said.

Hmmm, and the DEC allows this?