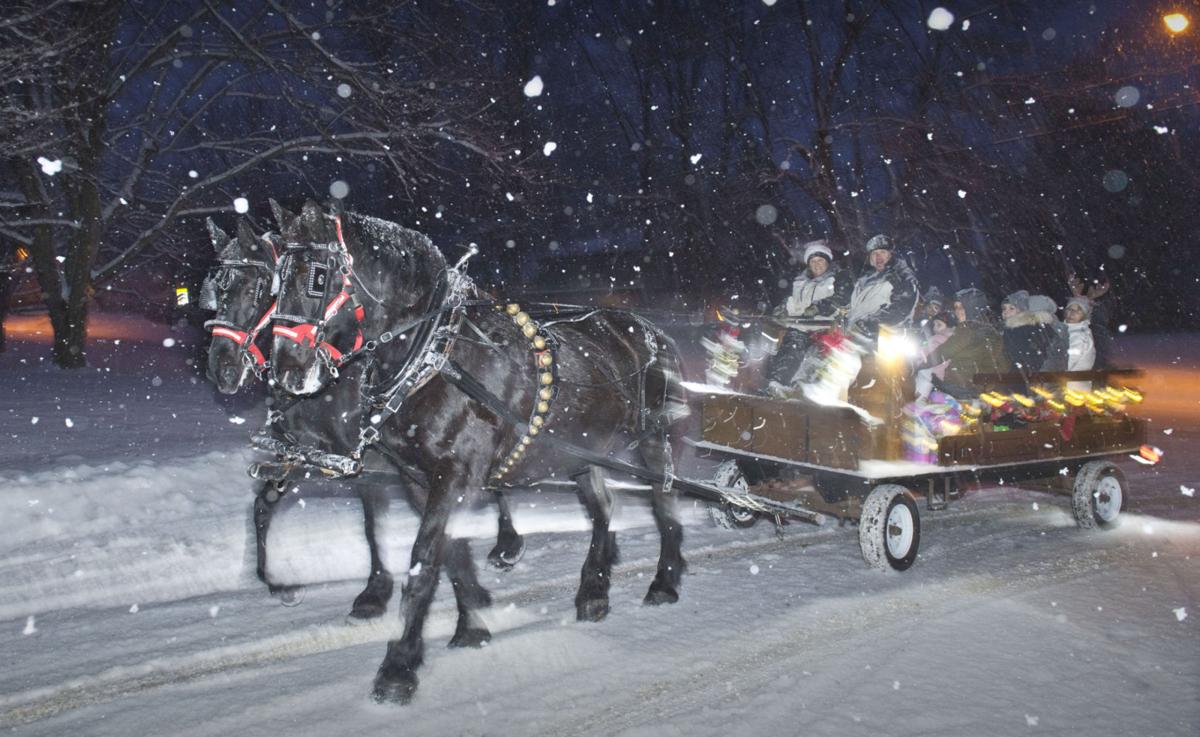 A horse-drawn wagon turns onto Howe Boulevard, Dec. 17, as it travels through the Village of Canton during a snow squall. Christopher Lenney/Watertown Daily Times 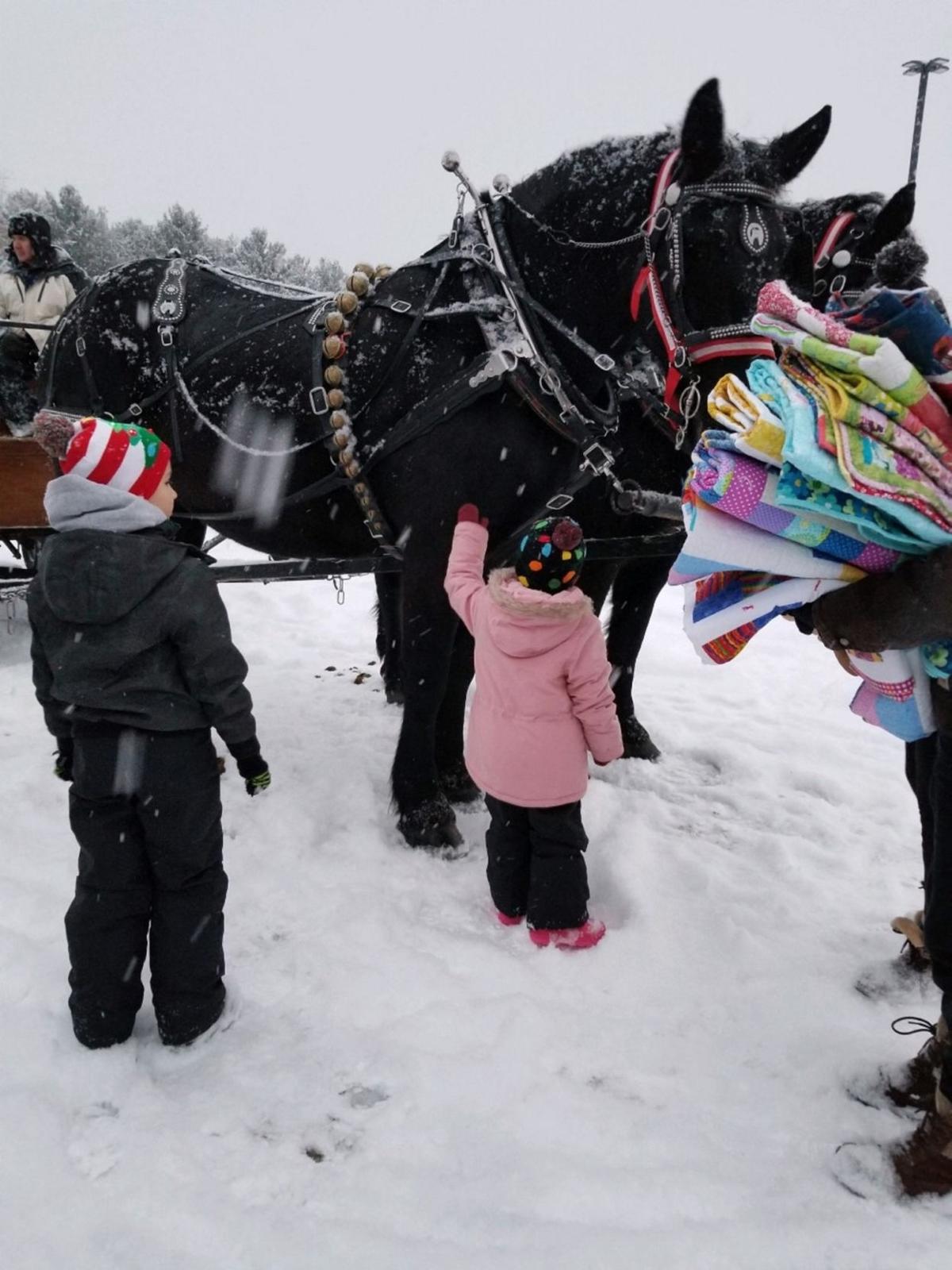 Brooklyn Danger Hall, 5, greets Daisy and Dolly, of Canton Carriage, in the Save A Lot parking lot Dec. 17, shortly before taking a carriage ride with family through the Village of Canton. Submitted by Meghan Hall

A horse-drawn wagon turns onto Howe Boulevard, Dec. 17, as it travels through the Village of Canton during a snow squall. Christopher Lenney/Watertown Daily Times

Brooklyn Danger Hall, 5, greets Daisy and Dolly, of Canton Carriage, in the Save A Lot parking lot Dec. 17, shortly before taking a carriage ride with family through the Village of Canton. Submitted by Meghan Hall

CANTON — Two sets of tracks, side by side, emerged from the Save A Lot parking lot Tuesday evening.

Printed in the snow were the marks of Daisy and Dolly, two Percheron mares that pulled a carriage of 10, bundled in coats and blankets.

At the head of the carriage sat Brooklyn Danger Hall, 5, her brother Logan Leslie, 7, and her mother Meghan Hall.

Brooklyn was diagnosed with brain cancer two years ago at age 3, and after being informed by doctors earlier this year she would have six months to live, Brooklyn has surpassed that estimate and is now stable.

“We didn’t think we would make it to Christmas,” Meghan Hall said. “It’s been a long road.”

Brooklyn and her family are spending the week at the Lodge at Dreaming Tree Ranch, 185 Wilkinson Road, Potsdam, as part of Help Sami Kick Cancer Foundation efforts to provide a refuge for families fighting pediatric cancer.

The Foundation was established by family and friends of Samantha M. “Sami” Curtis, Canton, who was diagnosed with brain cancer in 2015 and died after a two-year battle at age 18. Sami’s leading community efforts to help others with cancer began after the 2002 passing of her mother, who had been diagnosed with breast cancer.

As a teenager, Sami raised thousands of dollars for the St. Lawrence County Cancer Foundation and was posthumously inducted into Albany’s Women of Distinction program by State Sen. Patty Ritchie in 2017.

Tuesday’s carriage ride reunited some of Sami’s friends and family members, who accompanied Brooklyn on the more than three-mile journey through the village of Canton, from Save A Lot on Route 11, to Judson and Farmer Streets off Route 310, and back again.

Just one of several activities planned for the week, Brooklyn’s carriage ride was facilitated by Monica Stone and Tom Aldous of Canton Carriage. The family will celebrated Christmas on Dec. 18 and a hold a crafting day Dec. 19.

Itineraries for families staying at the Lodge are determined by each family, according to Kate Mulkin, treasurer and secretary of the Help Sami Kick Cancer Foundation.

As the second family to be hosted by the Foundation at the Lodge, the Halls wanted an active schedule of events, whereas a family that spent a week at the Lodge shortly before Thanksgiving requested they be given more space to enjoy the Dreaming Tree property. That flexibility, Ms. Mulkin said, is key to allowing families to tailor the experience to their needs.

“It’s nice to connect with other families who have been through it,” Meghan Hall said. “That’s really how you get through.”

As the carriage returned and approached the commercial district off Route 310, Brooklyn led a few choruses of “Jingle Bells,” with the carriage riders adorned with light-up Christmas necklaces and reindeer antlers.

Snow fell gently on hats and noses, and Meghan Hall fed snow to her daughter from her hand, telling her: “You’re so cool.”