Volunteers take a break at a Maryland-based Making Cards for Our Troops event on May 7. A total of 1,165 cards were made by 48 people in four hours. Photo courtesy of Pat Brodsky 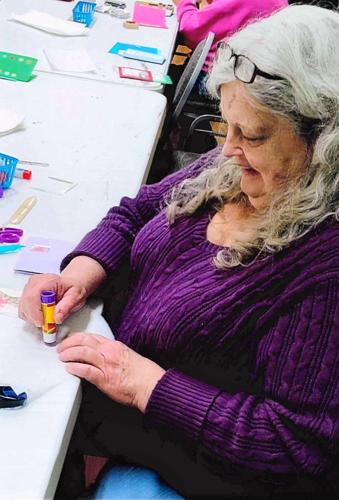 Charmaine J. Lafountain of Adams works on a card at a Making Cards for Our Troops gathering in May. Photo c ourtesy of M. Masters

A sampling of the cards created in May at a Making Cards for Our Troops event at Adams Village Baptist Church. Photo courtesy of M. Masters 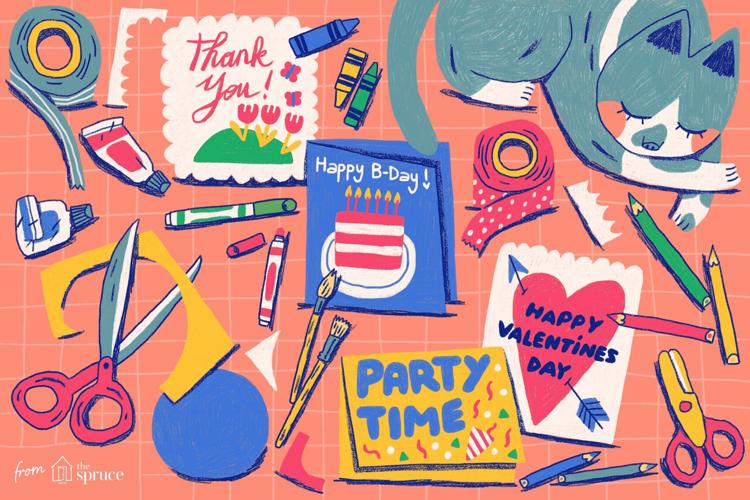 Volunteers take a break at a Maryland-based Making Cards for Our Troops event on May 7. A total of 1,165 cards were made by 48 people in four hours. Photo courtesy of Pat Brodsky

Charmaine J. Lafountain of Adams works on a card at a Making Cards for Our Troops gathering in May. Photo c ourtesy of M. Masters

A sampling of the cards created in May at a Making Cards for Our Troops event at Adams Village Baptist Church. Photo courtesy of M. Masters

ADAMS — Marvel J. Masters is crafty, especially when it comes to greeting cards.

For the past several months, she has been making many more of them after discovering the national nonprofit organization Making Cards for Our Troops. Through the program, volunteers create handmade cards for various occasions, which are then sent to American troops overseas. Troops can write their own messages inside, which can then be sent to family members and other loved ones.

Mrs. Masters is a member of Adams Village Baptist Church, which for years has been involved in the AdoptaPlatoon program through Fort Drum. About a year ago, she read a story in Guidepost magazine that featured the Making Cards for Our Troops program.

“When I saw that, I thought it’d be a perfect opportunity for us to jump in and to see what we could do,” she said.

Mrs. Masters and other volunteers have met several times since last year at Adams Village Baptist Church to create cards for the program. They first met in the autumn of 2021 to create Christmas cards.

The cards are sent in batches to Patricia A. Prodsky, founder of Making Cards for Our Troops, based in Annapolis, Md. The Adams volunteers also send envelopes with the cards. They most recently met to craft the cards late last month.

“The South Jefferson thrift store Rescued Treasures in Adams Center donated about 40 rubber stamps for us to use,” Mrs. Masters said. “That was awesome.”

Each card, Mrs. Masters said, is individualized, created by various materials collected by the volunteers.

“Anything is fair game,” Mrs. Masters said of how the cards are made. “There are no two that are identical. We don’t cookie-cutter them. It’s whatever the person sees and how they want to do it.”

Each crafter also signs the card and with the date it was created.

“It’s a lot of fun and our group has grown,” Mrs. Masters said. “We keep adding people all the time who haven’t done this. It’s a good time tog et together, plus we’re recycling stuff and doing it for somebody else. It’s a win-win.”

Mrs. Brodsky said that the Guideposts article that inspired Mrs. Masters had the same effect on many others across the country. Mrs. Brodsky wrote the article for the magazine’s “Someone Who Cares: Pass It On” feature, published in the June/July 2020 issue.

In the article, Mrs. Brodsky explained how a friend of hers told her that she was making care packages for deployed troops, and that many overseas troops requested Christmas cards so they could send them to families with a message the soldiers could pen.

Mrs. Brodsky and friends, dedicated paper crafters, decided to get together in 2016 to create cards. In that first year, 550 cards were made. By 2019, nearly 7,000 cards were created, and sent to troops in Kuwait, Afghanistan and Syria. But the Guideposts article shifted the Making Cards for Our Troops program into overdrive. Cards that were created and donated to the program went from 7,000 to 76,000.

Mrs. Brodsky told her volunteers last year that they should expect the number of cards to decline as pandemic restrictions lifted.

The program, Mrs. Brodsky said, is a year-round operation.

“From January until today, we’ve sent out 28,000 cards,” she said when interviewed the first week of June.

In the early years of the program, Making Cards for Our Troops tried to send cards to various military bases for coordination.

“We soon learned that we didn’t have the connections to get to enough bases for the cards that were coming in,” Mrs. Brodsky said.

She stumbled upon the organization Operation Gratitude, a nationwide nonprofit dedicated to providing people across the U.S. with opportunities to volunteer and to say thank you to our military, veterans and first responders. In 2003, Operation Gratitude sent its first four care packages to deployed service members in Iraq.

One aspect of Operation Gratitude is handmade With Love, with volunteers putting skills such as sewing and knitting to work, creating items for care packages.

Mrs. Brodsky asked Operation Gratitude officials if they would be interested in handmade cards. Now, every care package Operation Gratitude sends out not only includes letters from grateful Americans, but also blank cards for the service members’ own personal use.

Volunteers across the country, such as Mrs. Masters at Adams Village Baptist Church, send cards to Mrs. Brodsky in Annapolis, who operates the Making Cards for Our Troops nonprofit out of her home. When enough cards are collected from across the country, they are boxed and sent to Operation Gratitude, based in California. The nonprofit uses USPS Priority Mail shipping boxes, with a flat rate of $21.50. Between 400 and 450 cards can fit into one of the boxes.

“Our biggest expense is mailing out the boxes,” Mrs. Brodsky said. “That’s the expense we have to come up with. We have fundraising. We approach organizations like the American Legion and Rotary clubs. It’s a constant battle because it’s difficult for us to do. We just don’t have all the connections that we need.”

When cards arrive at Making Cards for Our Troops headquarters from around the country, including from Alaska and Hawaii, they are sorted and checked before being boxed up.

“We’re a clearing house,” Mrs. Brodsky said. “We have to make sure there’s no glitter or anything large that pops off the card.”

However, the rejected cards aren’t tossed away.

“We donate them to churches, veterans groups and places like that,” Mrs. Brodsky said.

In late May, the Annapolis-based Making Cards for Our Troops group hosted an event at Davidsonville United Methodist Church.

Making Cards for Our Troops sends out packages to Operation Gratitude each week.

n WHAT: Making Cards for Our Troops, a national nonprofit dedicated to making handmade cards for U.S. troops. The cards are then sent overseas so that troops can have cards to send home to their loved ones.

n LOCALLY: Volunteer crafters have met several times at Adams Village Baptist Church. For more information on the local program, how to join in, or to donate supplies, contact the churct at 315-232-2237.

n NATIONALLY: To contact the Annapolis, Md.-based nonprofit, write to cardsfortroops2398@gmail.com. The group also has a Facebook page.