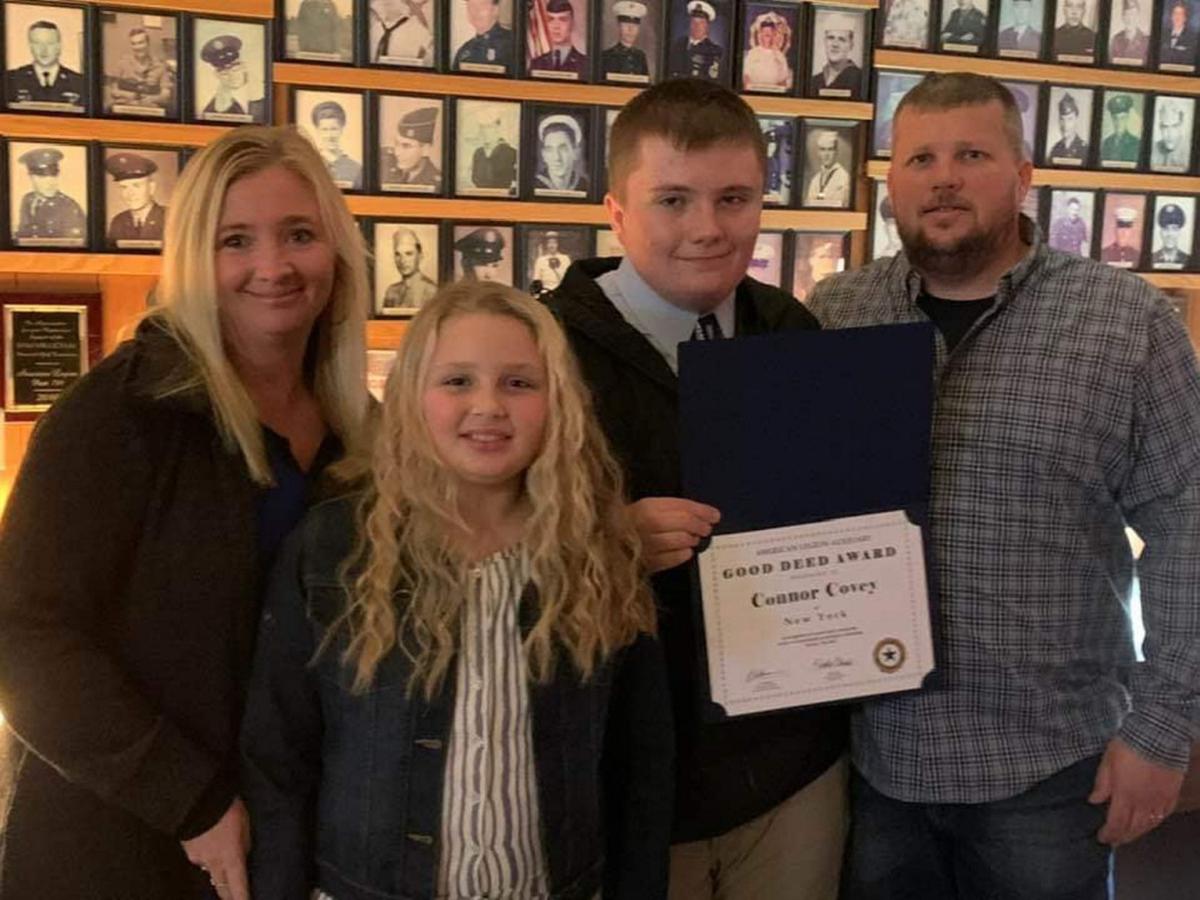 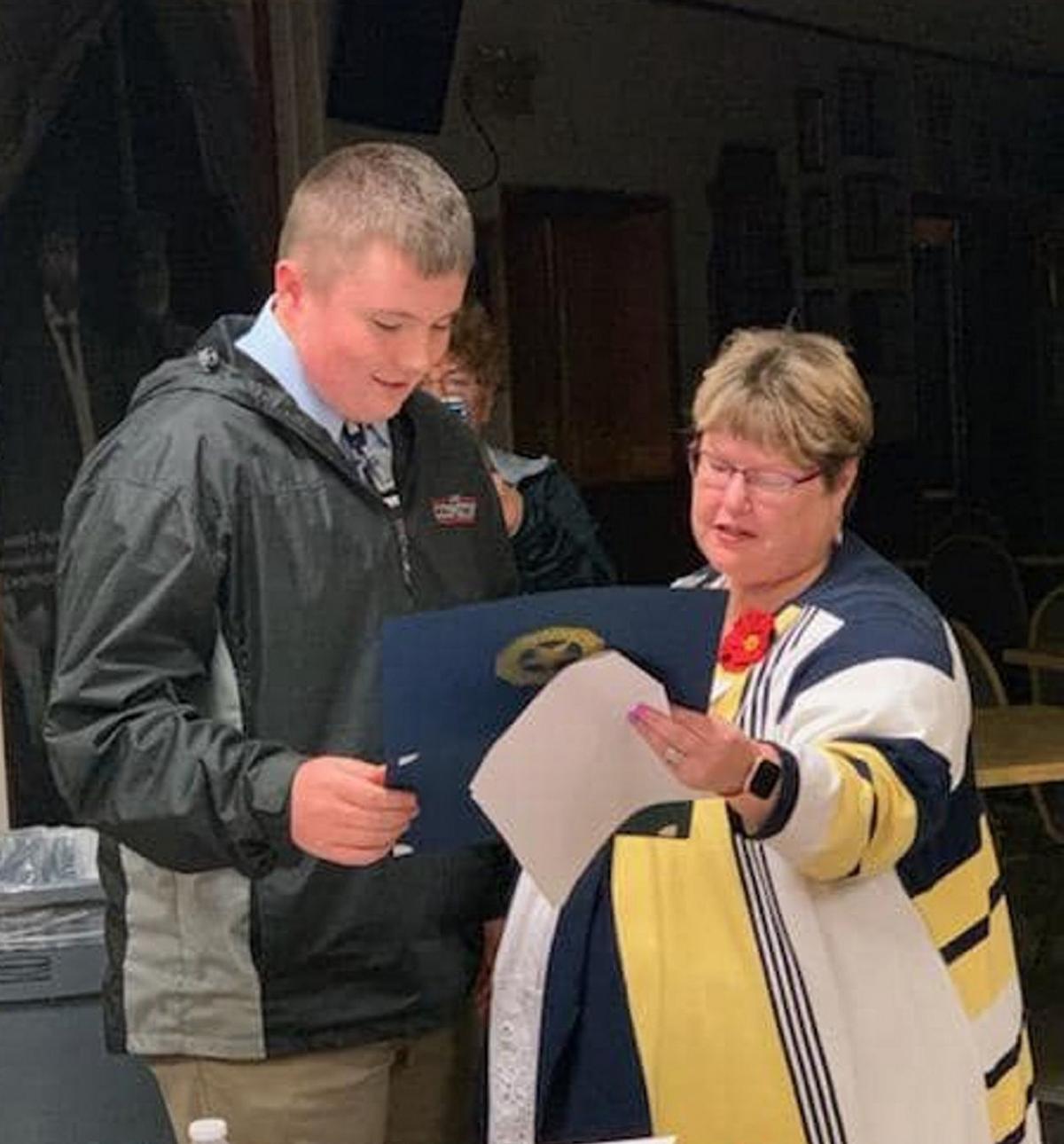 Connor Covey was surprised to receive the Good Deed Award from Amy McEathron, who nominated him for the national award from the American Legion Auxiliary. Contributed photo

Connor Covey was surprised to receive the Good Deed Award from Amy McEathron, who nominated him for the national award from the American Legion Auxiliary. Contributed photo

CARTHAGE — A Carthage Central School freshman was honored by the American Legion Auxiliary with the Good Deed Award.

Connor Covey, son of Meredith and Marc Covey of Carthage, was recognized for multiple projects he has done over the past several years to aid hospitalized children and those in the foster care system as well as showing appreciation to law enforcement officers.

“I nominated Connor as I want to share the good things and positive things that our children are doing,” said Amy McEathron, who along with fellow Carthage Legion Auxiliary Unit 789 member April Pike submitted the national nomination. “With all the sadness around, I love to share positive energy in our community. Connor is so helpful and willing to do anything to help others.”

Connor said he was surprised by the recognition when he recently went to the Legion Post to receive the honor.

“I was very surprised, overwhelmed and humbled,” said Connor. “My mom, dad, grandparents and friends made me think that this was for my Aunt Debbie (Swem), who is a part of the American Legion Auxiliary. I was very surprised when I heard Amy announce my name! I looked at my mom and she gave me a big hug and told me she was so proud of me and that I deserved the award.”

“As his parents we couldn’t have been more proud of Connor,” said Mrs. Covey. “He is well deserving of this award. He is the most selfless kid I know. He is always willing to give and help anyone. Whether he knows you or not.”

Connor’s projects include collecting Christmas presents to be donated to young patients at the Upstate Golisano Children’s Hospital in Syracuse and to the Jefferson County Children’s Home in Watertown.

Connor said he started this project in 2015 for children who may not be with their families over the holidays.

“I decided to do this project because I wanted to put a little bit of joy in these kids’ lives over the holidays,” he explained. “I put boxes in the middle school and Black River Elementary. I also put boxes in Stefano’s Pizzeria in Carthage, and the Carthage Savings and Loan Bank in Carthage. With the help of family, friends and the staff and students at both the Carthage Middle School and Black River Elementary, I successfully raised boxes and boxes of toys, apparel and art/crafts supplies.”

After the death of New York State Trooper Joel R. Davis in the summer of 2017, Connor decided to show appreciation for the sacrifices law enforcement officers make.

In a letter describing his projects, Connor told the background of his decision. He noted Trooper Davis, a four-year veteran with the state police, was shot and killed while approaching a residence in the town of Theresa. Davis also served for nearly a decade as a sheriff’s deputy with the Jefferson County Sheriff’s Department. Davis was the first trooper to be shot and killed since 2007, but less than a year later, another New York State trooper was murdered, State Trooper Nicholas F. Clark shot and killed in the town of Erwin in Steuben County. Clark was a nearly three-year veteran with the state police.

“My dad is a New York State corrections officer and I have an uncle who is a Syracuse police officer,” said Connor. “With the death of Davis that hit so close to home I really wanted to do something for the officers and troopers who risk their lives everyday to protect the citizens of the north country. So, in the fall of 2017, I started working on a holiday project that would give back to the officers and troopers who protect us. I wanted to make something that the troopers and officers could take on patrol with them. I decided that I would fill quart-sized mason jars with big and small chocolate bars, coffee and hot chocolate.”

Connor met with school officials to solicit donations and teamed up with the Carthage Middle School Student Government to get help to assemble the jars.

“Student government donated four cases of jars and a former teacher of mine donated three cases,” said Connor. “Through teachers and family we received over $60 in money donations. These donations were used to buy more supplies including the Thin Blue Line Flag Stickers which were put on the lids of the jars.”

The 120 jars were delivered to every state police barrack in Jefferson and Lewis counties, Carthage and West Carthage Police Departments and the Black River/Evans Mills Police Department. “The officers and troopers were so grateful that we thought of them and that we knew that everyday, they sacrifice everything,” said Connor.

“These heroes put their lives on the line 24/7, 365 days a year,” the award recipient said. “These officers know that they may never see their family ever again, but they still risk everything to protect us.”

With full support from school officials from the high school, middle school and Black River Elementary, Connor repeated the project this year.

Teaming up with the Carthage High School 12 Honors Class, he decided to change things a bit.

“I decided to fill the jars with chocolate and coffee, then we filled goodie bags with hot cocoa and candy canes,” he said. “I wanted to make the Christmas Packages bigger and better by adding a Thin Blue Line Flag to every jar with the donations that we received, but the father of a friend of mine donated over 100 Thin Blue Line Flags to put on the jars.”

In addition to donating the jars to the law enforcement agencies, Connor gave packages to both of the Carthage Central security officers, who are retired state troopers.

Connor said of his projects, the Law Enforcement Christmas Packages was his favorite “because the officers really do a lot for the community and they don’t get much in return.”

“I plan on doing the Christmas Law Enforcement Project for as long as I can and I hope that it gets better, year after year,” said Connor, noting, “The officers and troopers really liked that it was something that they could take out on patrol with them and that they could share it with their families.”