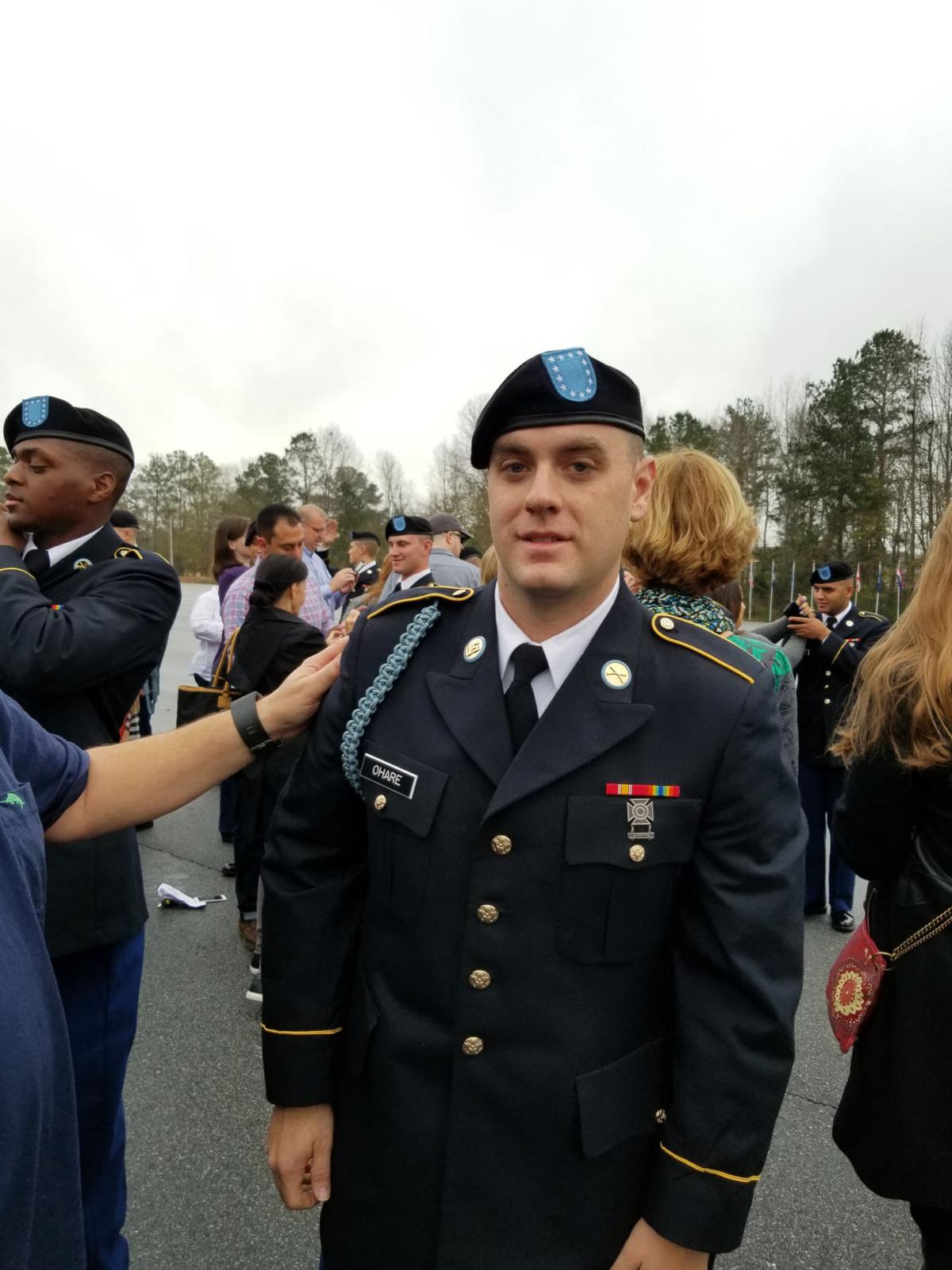 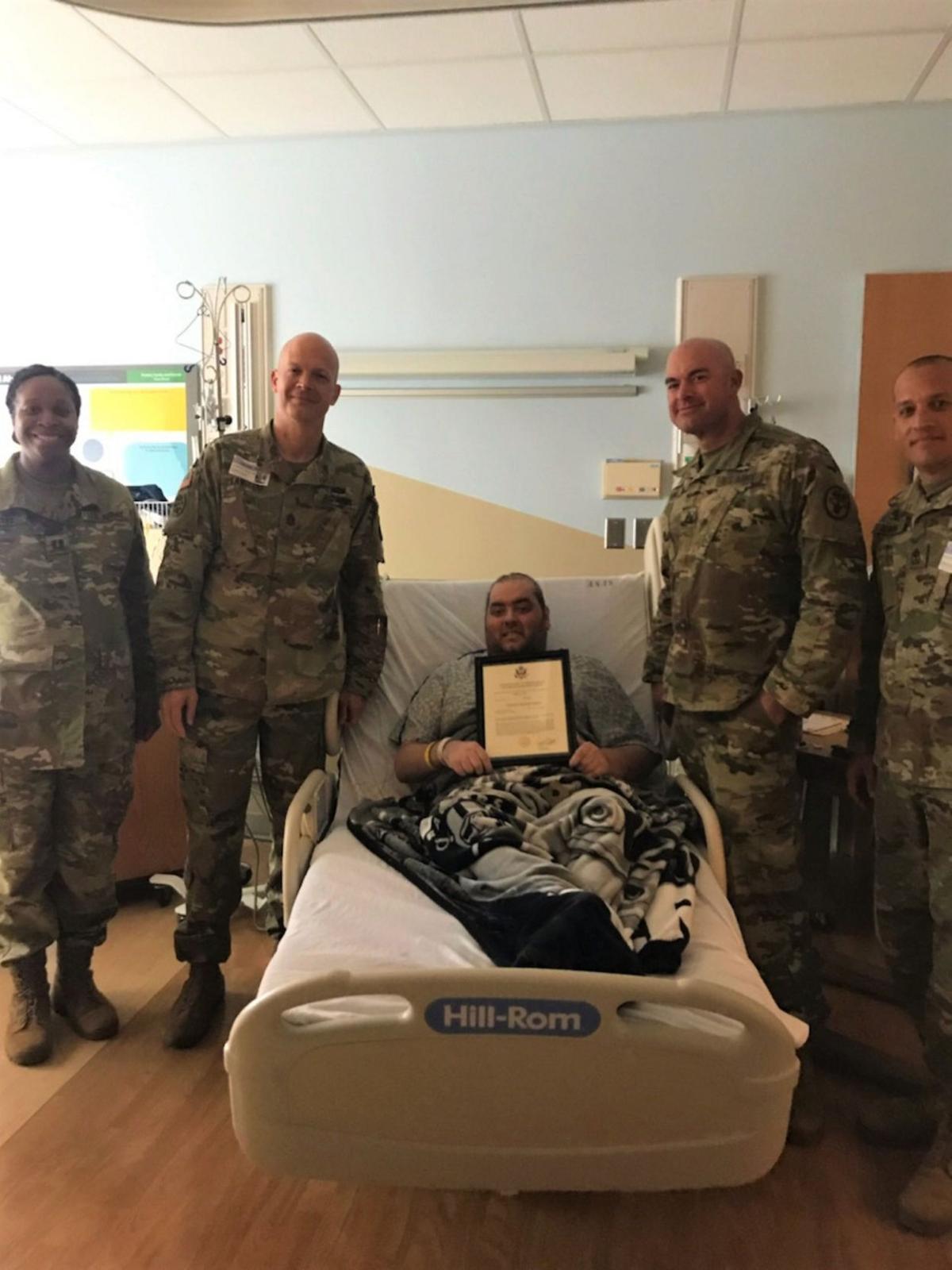 Newly promoted Specialist Robert O’Hare smiles from his hospital bed with his promotional plaque, given to him by his first sergeant and captains. Provided photo. 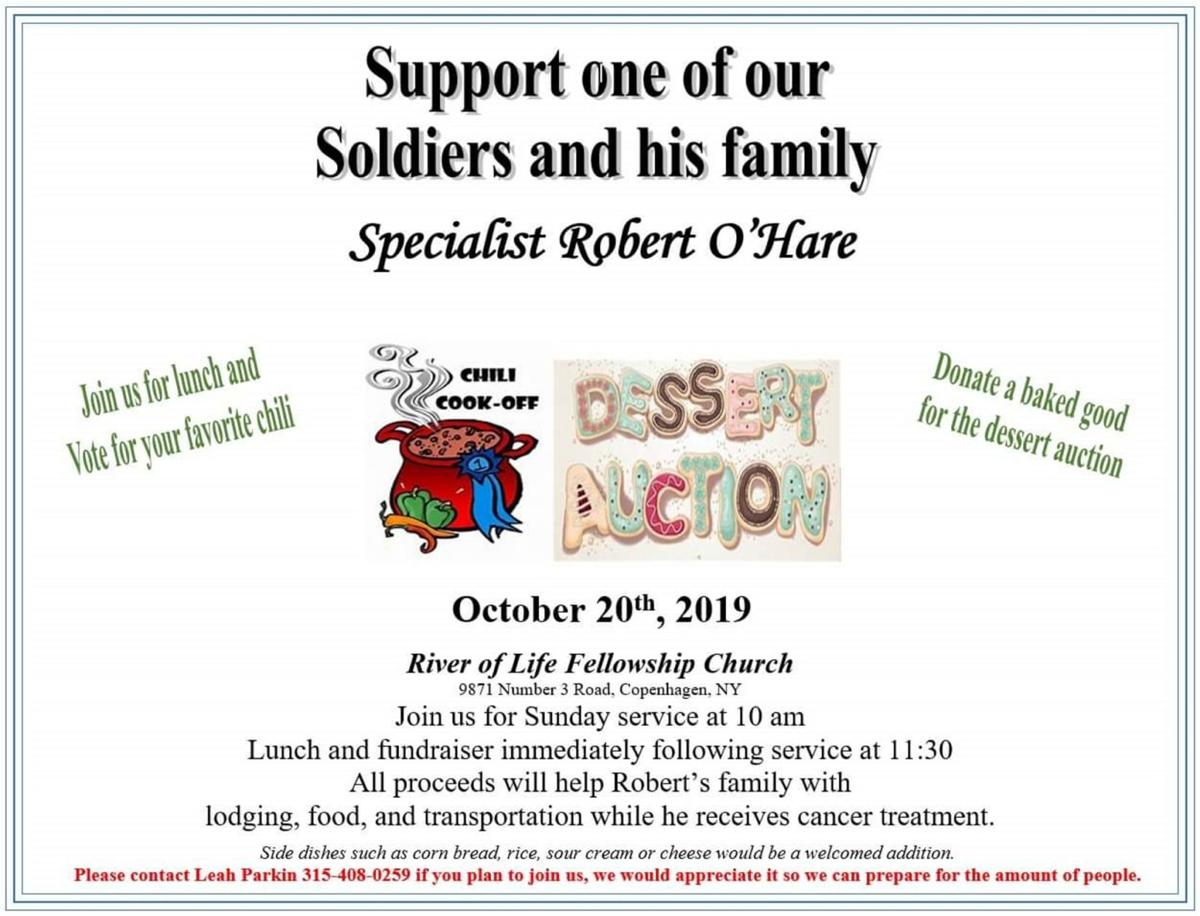 A fundraiser will be held on Sunday at the River of Life Fellowship Church in Copenhagen to support Spc. Robert O’Hare, a Fort Drum soldier from California, who is battling cancer.

Newly promoted Specialist Robert O’Hare smiles from his hospital bed with his promotional plaque, given to him by his first sergeant and captains. Provided photo.

A fundraiser will be held on Sunday at the River of Life Fellowship Church in Copenhagen to support Spc. Robert O’Hare, a Fort Drum soldier from California, who is battling cancer.

WATERTOWN — The day after Christmas last year, Cindie O’Hare received a call from her son’s girlfriend telling her that he was in the emergency room for a mass in his brain.

This would be the beginning of an incredibly long and hard year for the family.

Specialist Robert O’Hare, 27, was diagnosed with an immature teratoma of the brain, which Mrs. O’Hare described as a form of germ cell cancerous tumor that originated in his thalamus, the control center for things like speech in the brain.

Since then, Spc. O’Hare, a Fort Drum soldier from California, has been in and out of the hospital, undergoing many procedures for various complications along the way.

“He has never been one to lean on others or ask for help, not wanting to burden anyone,” Mrs. O’Hare said. “I have heard him time and time again apologize to his friends and family that all this is happening to him, that’s just who he is.”

When he contracted hydrocephalus in January, a condition in which excess cerebrospinal fluid builds up within the ventricles of the brain that may increase pressure within the head, Spc. O’Hare had to have an emergency craniotomy in which a shunt with a tube running from his brain to his stomach was placed to help with the fluid buildup.

In March, the shunt became infected and had to be removed, so he was on an IV and antibiotics until a new shunt was placed. During this time, an MRI showed two new spots in his brain, with the original spot appearing larger than it had before.

Shortly after, Spc. O’Hare underwent a second craniotomy during which the surgeon removed two of the spots with galvanized radiation treatment. Laser ablation was used to kill the remaining tumors on the original tumor site.

He was finally released from the hospital and able to go home, but little did the family know their troubles weren’t yet over.

A few days after being released, Spc. O’Hare was complaining of shortness of breath, and a check of his lungs at the hospital revealed his tumor had actually mutated and spread to his chest. Following this discovery, he was placed on aggressive chemotherapy, which he is still undergoing.

Due to everything with her son happening in a sequence, there was no opportunity for him to go back home before this, so Mrs. O’Hare stayed here in New York with him for nine months, becoming his full-time caregiver. His father traveled back and forth from California to New York as much as his work would allow, trying to hold down the fort on his end while his son battled an aggressive disease across the country.

During this time, while Spc. O’Hare’s active duty medical insurance covered his hospital bills, other expenses started piling up when Mrs. O’Hare had to rent both a car and an apartment for the nine months, as well as stay in hotels close by when her son was in the hospital and pay for meals and incidentals.

To help with these other expenses, members of the River of Life Fellowship Church in Copenhagen, located at 9871 Number Three Road, have decided to use their annual fundraiser to assist the family.

On Sunday, the church will hold a chili cook-off and baked goods auction in order to raise money for the O’Hare family.

“I was totally surprised and amazed that people I barely know would do this for us,” Mrs. O’Hare said. “I cried. It’s a little awkward for us because we are the kind of people who don’t really ask for things, we kind of just plug away and move along. I’m still blown away.”

Leah Parkin, a vocational rehab counselor with the VA at Fort Drum, works with soldiers transitioning out through the medical board process on career and educational counseling. Through her job she met Spc. O’Hare and his mother, who she instantly connected with and invited to the church.

She and Spc. O’Hare came to the church as often as they could, and as she came to know more about what the family had been through, Mrs. Parkin could see her new friend was under a lot of stress, but said she never once complained — no one in the family did.

“Robert has been so strong through all of this,” she said. “His mom has always said how he just toughs it out and deals with it like the soldier he is, even after chemo and radiation he would still come to church even though he was weak and might not be able to stand for all of it.”

According to Mrs. Parkin, the auction itself is a really fun time, and people go nuts and pay way more than they know any pie would be worth because they know it’s for a good cause.

Church service starts at 10 a.m. and typically ends around 11:30 a.m. with lunch starting shortly after, as well as the dessert auction.

“It’s a blessing to try and help this family,” Mrs. Parkin said. “We believe there’s power in prayer and there’s so many people that have been lifting this family up during their times of struggle.”

The type of chemotherapy Spc. O’Hare was started on at Upstate Medical in Syracuse involves four five-day rounds of chemo that are spread out over time. He still has three more rounds left to do, with a consultation coming up this week. If all goes well, he should wrap up his treatment in December or January.

During this time, the Army worked diligently to get Spc. O’Hare home to California to finish his treatment at Stanford, according to Mrs. O’Hare. Both she and her son finally flew from the East Coast to the West and returned to California last week on Oct. 8.

Pre-cancer, Spc. O’Hare was very active, according to Mrs. O’Hare. When not performing his duties in the Army, he was always looking for pickup lacrosse games or any other sport he could get in on.

She said all his life he has been part of a team, which is a big part of why the Army appealed to him.

After the promising results from this first round, Mrs. O’Hare has faith that this saga will have a happy ending.

“They seem hopeful that after all this they will have gotten it all,” she said. “After the first round he was able to breathe better and had no chest pain, so first appearances he looks like he is responding.”

Spc. O’Hare has been in the Army for two years and was just recently promoted to the rank of specialist.

Because he was in the hospital at the time, his first sergeant and several other captains came to present him with a promotional plaque and promoted him from private first class to specialist in his hospital room.

“It was really special and emotional for him,” Mrs. O’Hare said. “His unit in Fort Drum has been amazingly supportive and have made him feel better. He was blessed to have landed in that unit.”

Currently, Spc. O’Hare is an infantryman, but since he can’t do that particular job anymore, Mrs. O’Hare said he is thinking of taking cooking classes and becoming a chef for the Army, a way to give back to the Army for all it has done for him.

“We’re just grateful we’re all together and we’re going to take it one day at a time from here on out,” Mrs. O’Hare said. “We’re grateful for every day, and we praise God every time he has a treatment that seems to go well.”

As a result of his treatments, Spc. O’Hare has expressive aphasia, a type of aphasia characterized by partial loss of the ability to produce language, so finding words is sometimes difficult. Even so, he was able to tell his mother how great Fort Drum and the community was for him during this trying time, becoming teary eyed when he spoke about them.

“We greatly appreciate all the support we got from everyone in New York,” she said. “I don’t think things would have gone as well over there without all of that.”

Those interested in attending the fundraiser are encouraged to call the River of Life Fellowship Church at (315) 688-4500 or Leah Parkin at (315) 408-0259 so members can prepare for the amount of people expected to attend.