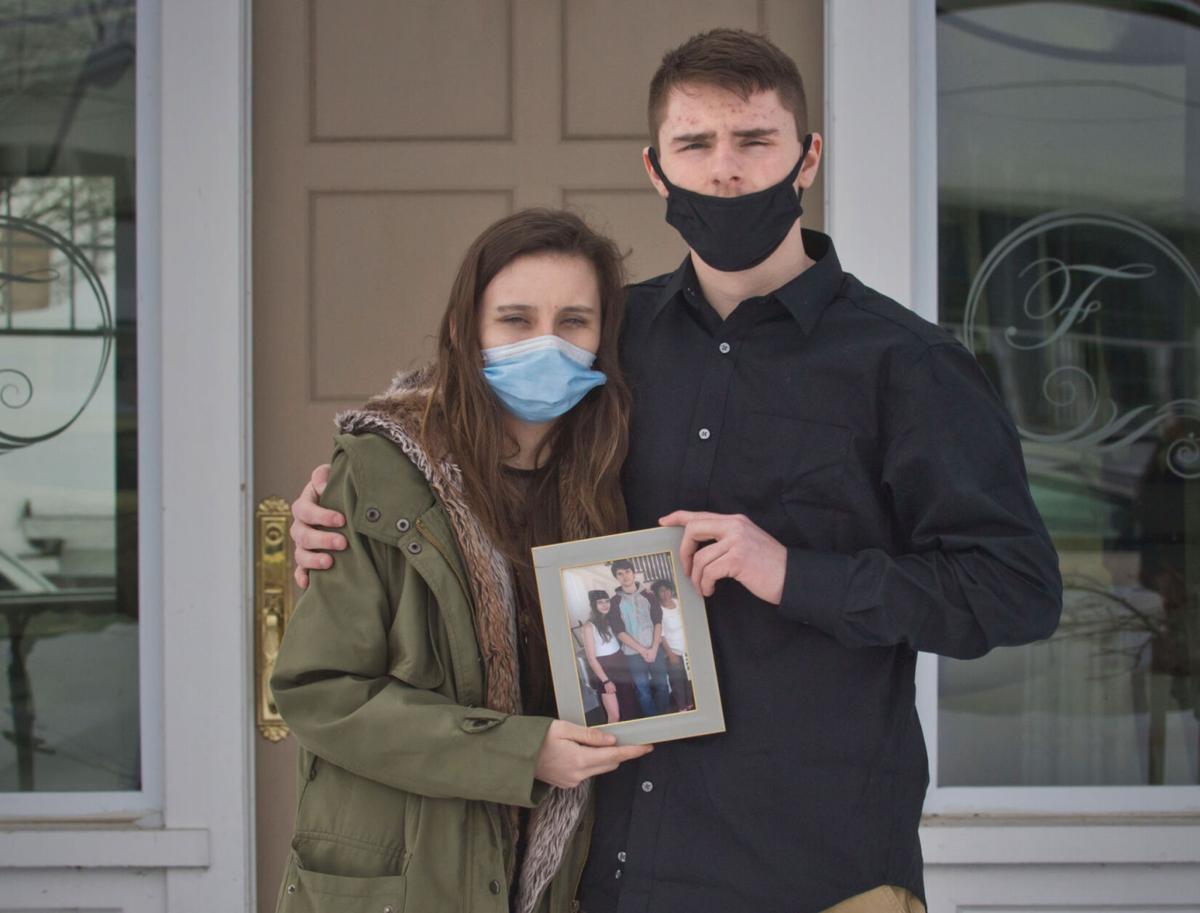 Brandy L., left, and twin brother Brandon hold a photo of themselves with their late mother, Dawn E. Waiculonis, outside Frary Funeral Home in Ogdensburg over the weekend. Their mother’s funeral was Saturday. Christopher Lenney/Watertown Daily Times 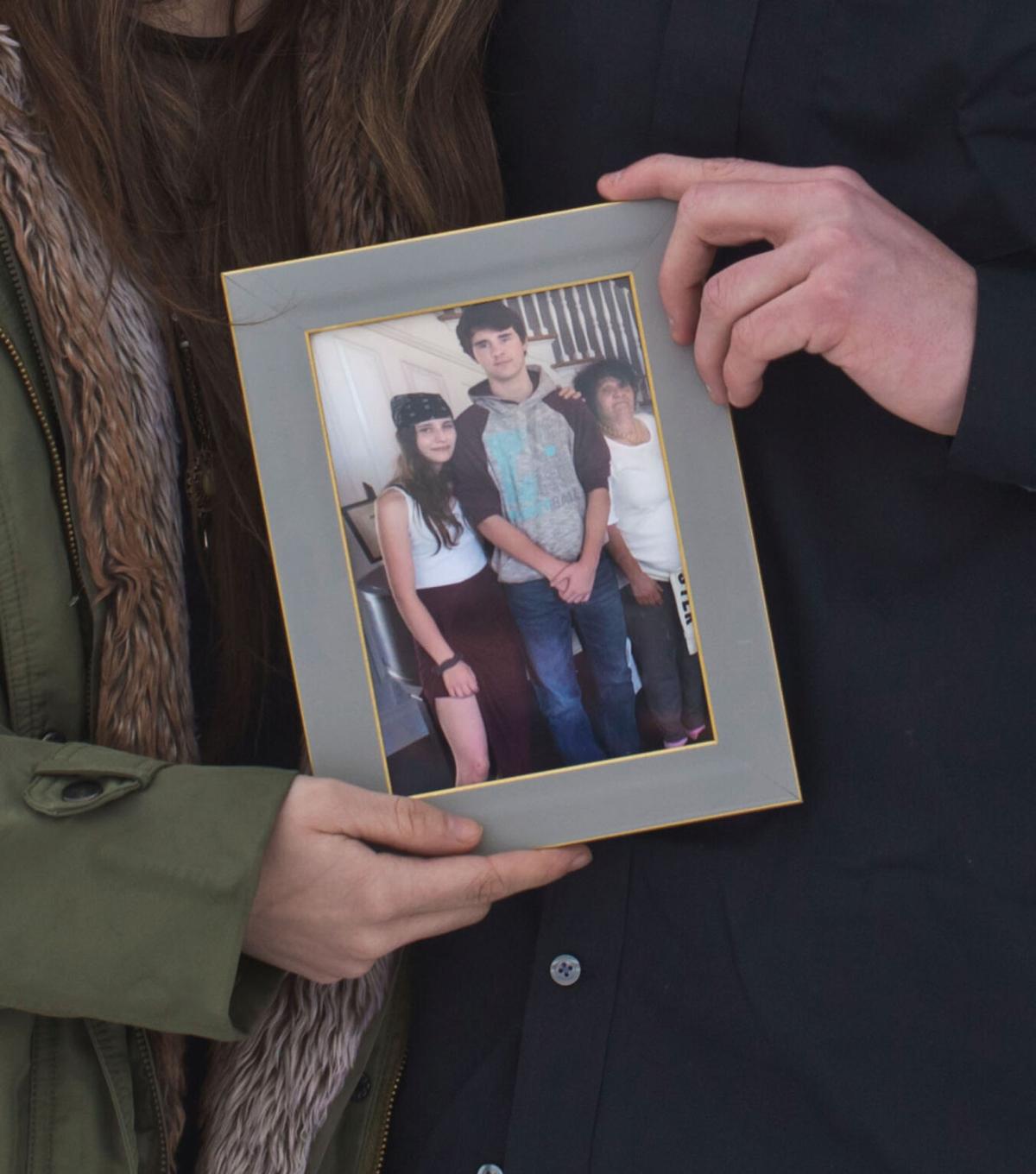 Brandy L., left, and twin brother Brandon hold a photo of themselves with their late mother, Dawn E. Waiculonis, outside Frary Funeral Home in Ogdensburg over the weekend. Their mother’s funeral was Saturday. Christopher Lenney/Watertown Daily Times

HAMMOND — Brandon LaRock was a devoted son and caretaker for his mother.

He stayed with her as her health deteriorated over the years, lying to his friends so he could go check on her. He even performed compressions on her chest roughly 900 times when she stopped breathing this past week.

“He’s always been super close to her,” his sister said. “He’s never spent a night without mom until this year.”

Their mother, Dawn E. Waiculonis, of Hammond, died Feb. 16 at the Claxton-Hepburn Medical Center in Ogdensburg from complications of a heart attack. She was 58.

Her untimely death threw the 18-year-old twin high school students, Brandon and Brandy L. LaRock, into turmoil as their living situation is in question just ahead of graduation. He’s living with an aunt and she with a family friend, highlighting why a community is rallying to help the two find a more permanent home.

An older sibling even offered for both of them to move south to North Carolina. It looks like he’s moving, but she seems to be staying.

Brandy, since she and her brother knew their mother best, was tested somewhat by leading her family through her mother’s funeral. She was the last person to have a conversation with her mother, and one of the last to say goodbye. Brandy remembers walking into her mother’s hospital room and seeing her connected to life support.

“I just remembered holding her and telling her how much I love her and how much I don’t want to be alone and how sorry I was that I wasn’t home,” Brandy said, not letting her tears break her voice. “Then I told her that it’s OK to go to heaven because she can be with her other dogs, and family members, and she can be with God and tell God all her jokes.”

Her death has left her twin children who have cared for her for years to start caring for themselves.

They knew about their mother’s previous heart attacks, keeping in mind that she had the twins when she was 40 years old. But they thought they had more time. The untimely death of a mother they were so close to has left their living arrangements and other aspects of their future unsettled.

Brandon was at basketball practice at Hammond Central School the day before she died. He would later tell his sister that he lost his focus at practice with an odd thought that something might be wrong with their mom. This wasn’t uncommon for the teenager.

His sister said he often would be at a friend’s house and tell them he forgot something at home. He would head back to check on his mom, but he wouldn’t even tell her that’s what he was doing — instead just telling her what he had told his friends. Brandy, meanwhile, was at a friend’s house Feb. 15. She remembers talking to her mother, who was home alone.

“The last thing I got to tell her was I love her and that I’d talk to her later,” she said. “I never thought anything was wrong. I asked her if she wanted me to come home and she told me no.”

Brandon got a ride home from practice and came home to find his mother not breathing, Brandy said. The three lived in a rural area, miles from any emergency services.

Brandy said her brother was on the phone with 911 dispatchers, who instructed him and walked him through CPR. As an ambulance responded, Brandon conducted CPR on his mom, compressing and listening to the dispatchers count the seconds over the phone. At one point the dispatchers asked him to take a break, but he refused. Brandy said he continued with roughly 900 compressions until first responders arrived.

Brandy said she got a ride home, where she met her brother.

“I remember him saying sorry over and over while he was crying,” she said.

Their mom was then taken to the hospital. It appears she had gone into cardiac arrest. Brandy said she wasn’t able to see her mother in the hospital that Monday, and by Tuesday she was on life support. Brandy said doctors told her there was too much brain damage for her mother to come back.

“I always begged her to go see someone, but she always told me she was fine and that the pain wouldn’t last forever,” Brandy said. “But my mom always looked after me and my brother.”

They had a funeral for their mother in Ogdensburg on Saturday. Some family came from out of state, and they’re all relatively close.

Mrs. Waiculonis had four other children who are all adults and out of the house. They, too, were close to their mom. They got together and spoke perhaps about how she loved the beach, her pets, snowball fights and mud fights with her 10 grandchildren, or her coffee and cigarette.

“We all had a special connection with mom,” Brandy said.

She’s staying with her best friend in Ogdensburg while her brother is with an aunt in Lisbon. They are approaching graduation as well.

Brandon has always maintained high grades, and Brandy is set to graduate early from welding school at the BOCES Northwest Technical Center.

Brandy is staying with Adrianna Vinch, her best friend.

It appears the family is not liking the idea of the LaRock twins living back home in Hammond, considering they are young adults and especially that their being there after a tragedy might be harmful. The money would be to help them in the process of getting a home of their own.

Mrs. Vinch said she tied the GoFundMe account to her daughter Arianna’s bank account, who is best friends with Brandy.

“The goal of the GoFundMe was to reward them for all their accomplishments,” Mrs. Vinch said. “These kids have struggled, the mom struggled. She never let them go without, but they have never had the best of everything. I just feel like they really both deserve a little booster of help to get them on their feet.”

There were also six dogs, two cats and a lizard in the house, many of which will be rehomed if the twins can’t find a place of their own.

Brandy has been tending to the animals, finding a good home for them and figuring out which ones to surrender almost every day since her mother’s death.

“I’m surprised this young lady hasn’t collapsed,” Mrs. Vinch said. “We’re making sure she eats, but she is the sole person removing all the animals.”

Mrs. Vinch couldn’t say enough about the twins. They have been thrust into independence without warning as they say goodbye to their mother. It was always the twins and their mom. She took care of them until they returned the favor.

Now they have yet another task in a long 18-year string of obstacles to overcome and strength to face. Watching them go through it brings one word to Mrs. Vinch’s mind.

“Impressive,” she said. “Brandy has had a lot of struggles. I tell you what, if anything is against her, she has experienced it. She is an absolutely amazing young lady. Her strengths overpower mine.

“I’m impressed by his intelligence, his strength and his true love for his mother,” she said of Brandon. “They are absolutely fabulous kids.”

Wow.... when you think of many kids that age are glued to their phone..and school drama...these two are mature beyond their years... a testimony to how they were raised.. prayer to the family..