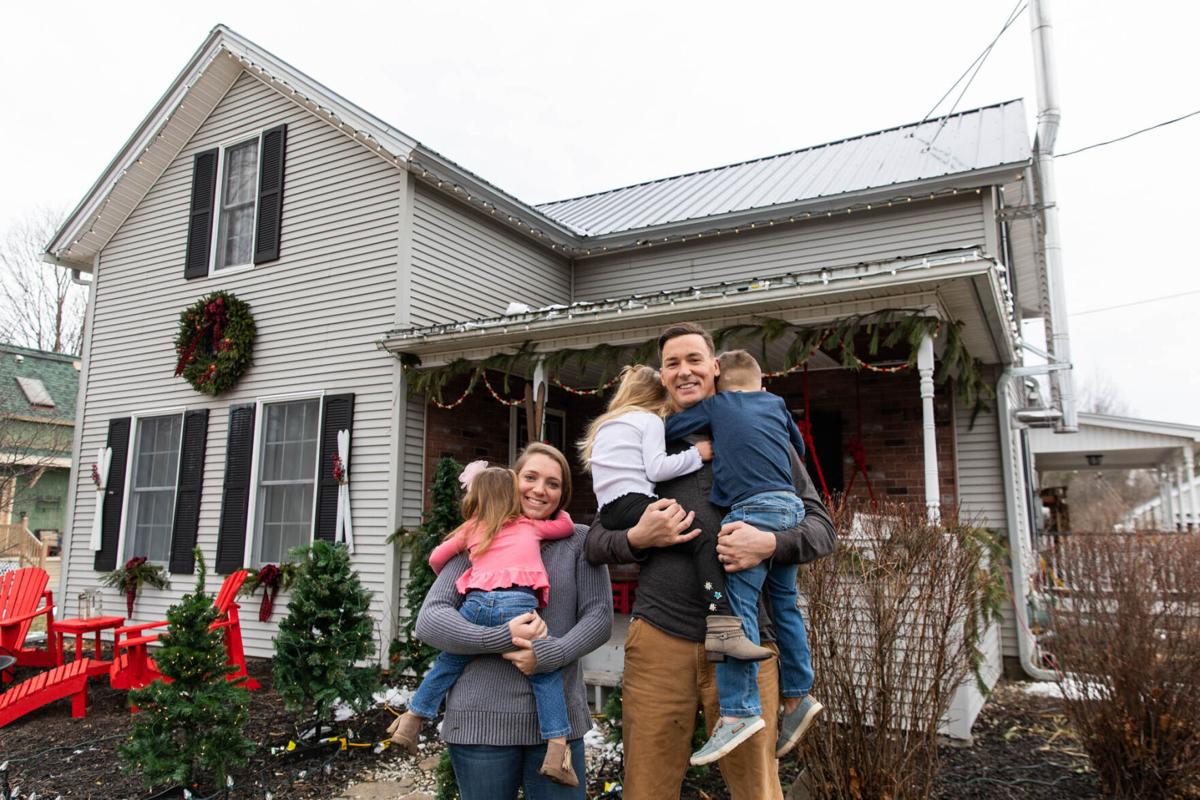 Brittany L., left, and Chase W. LeBarron, of Black River, hold their foster kids, Naomi, 2, left, Aleeah, 4, and Ethan, 5, as the family stands together in front of their Adirondack-theme decorated home along North Main Street on Wednesday afternoon. The children’s faces are not shown because they are in foster care. Sydney Schaefer/Watertown Daily Times 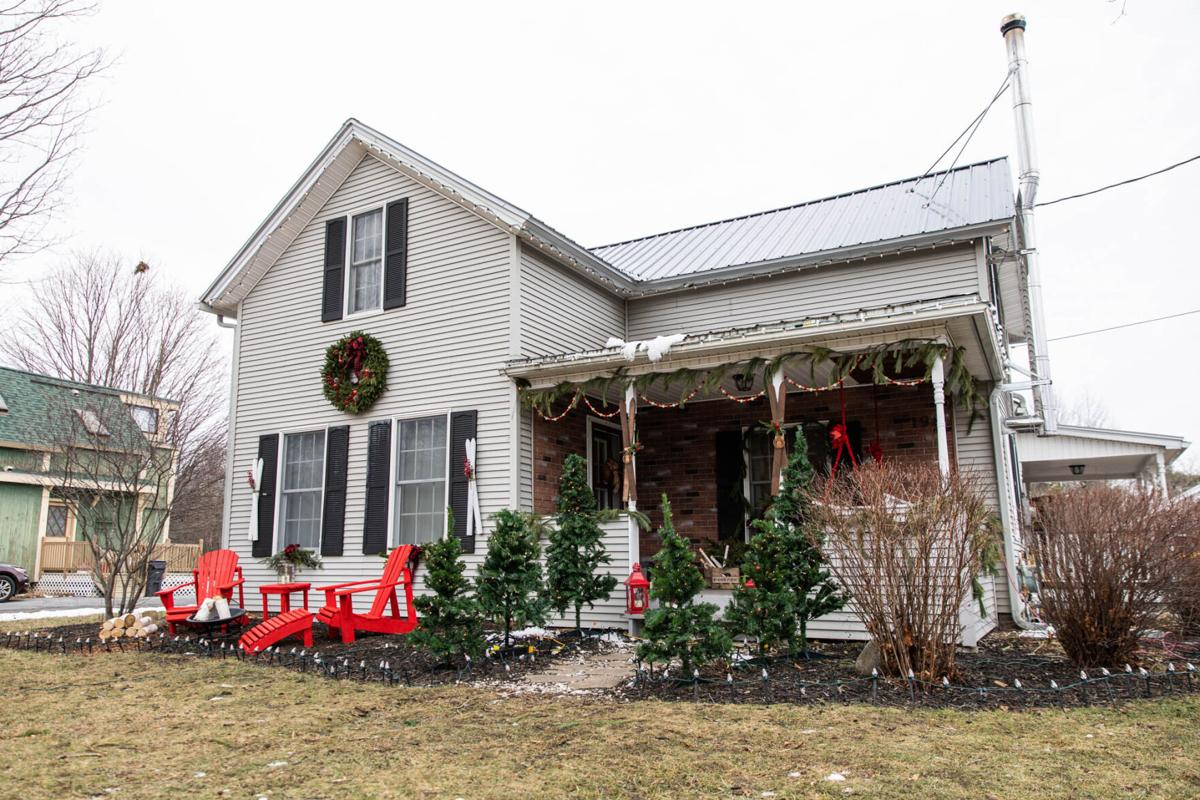 The LeBarrons’ home along North Main Street in Black River is decorated with an Adirondack-theme on Wednesday afternoon. Sydney Schaefer/Watertown Daily Times 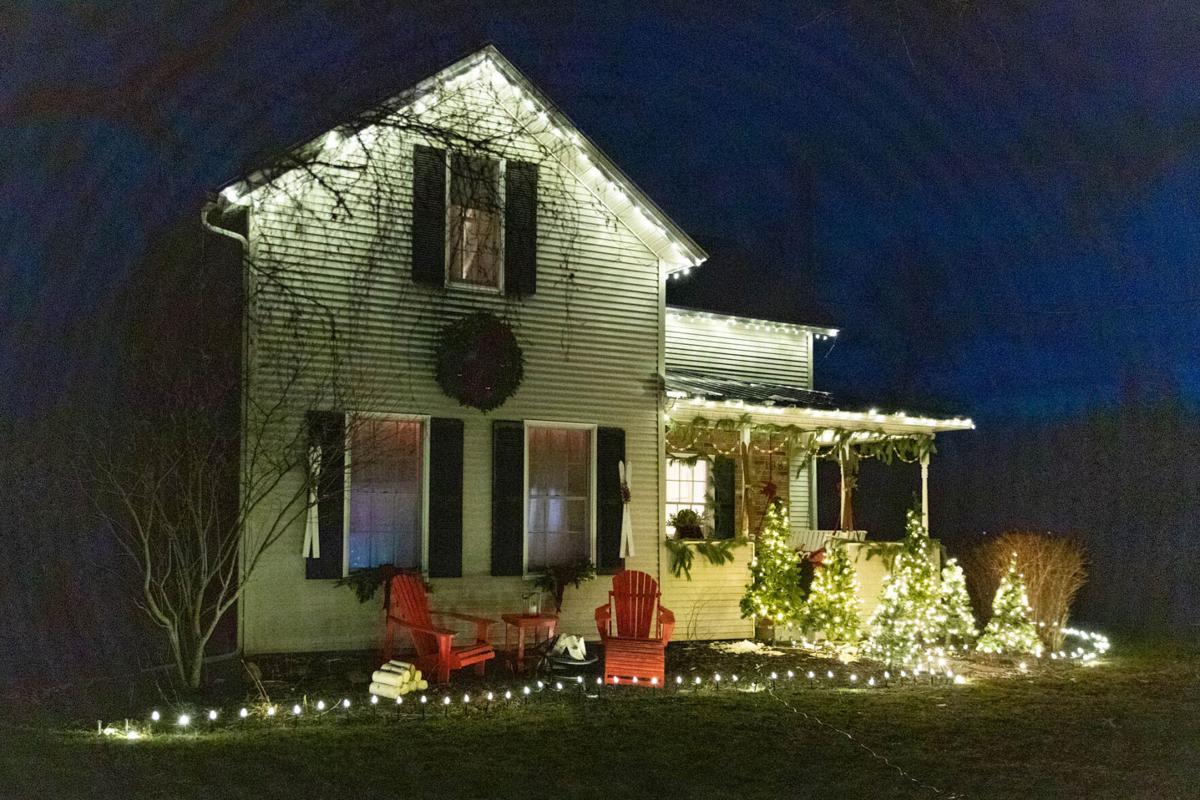 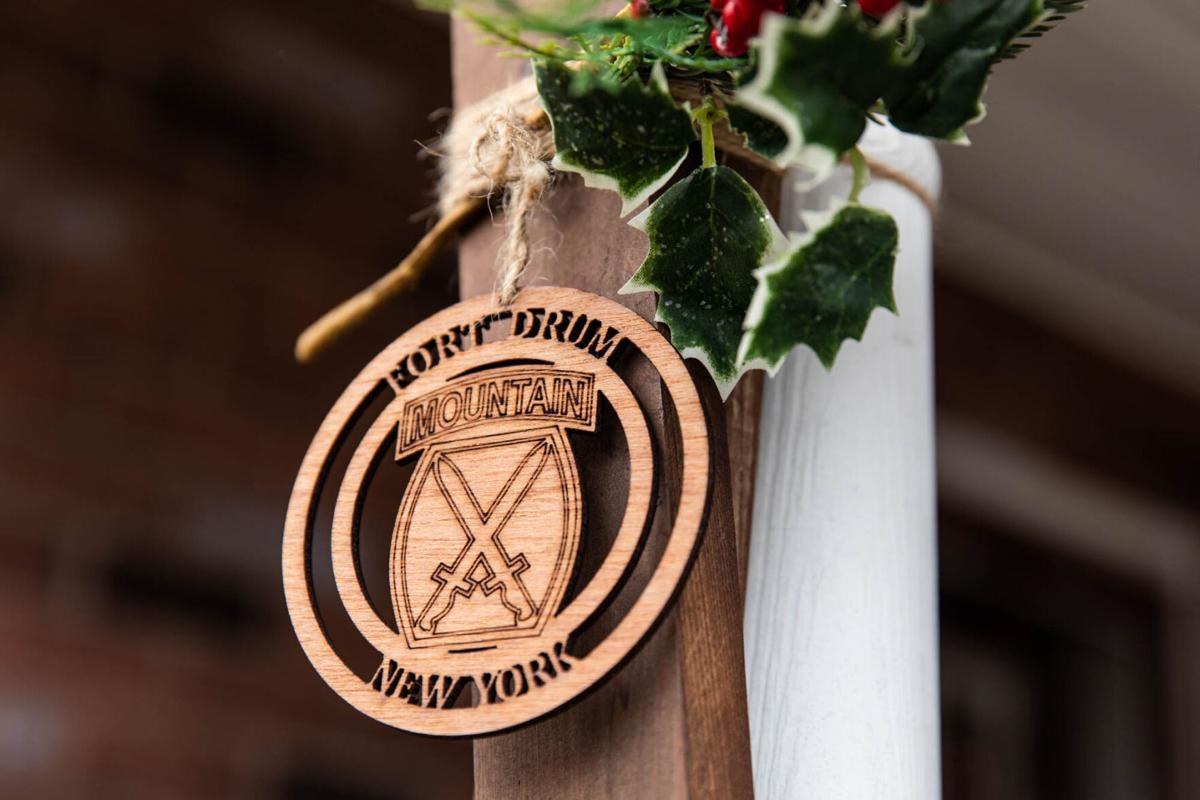 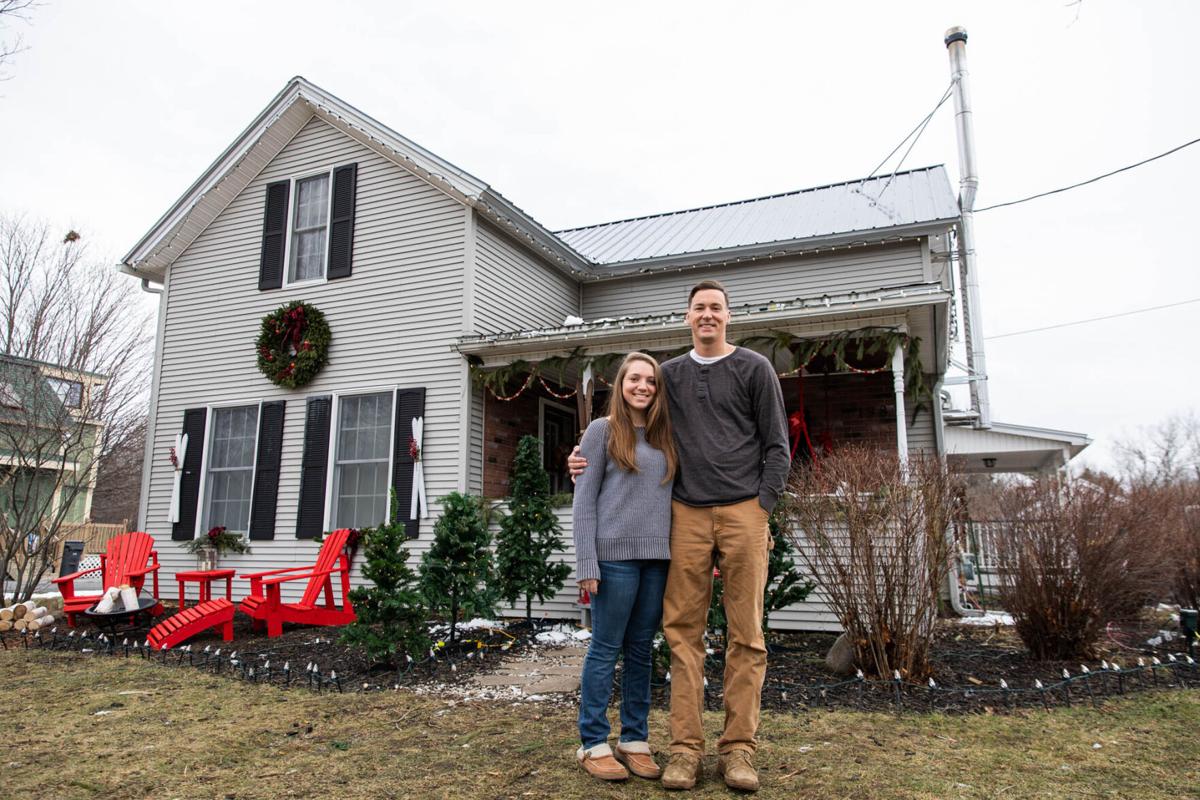 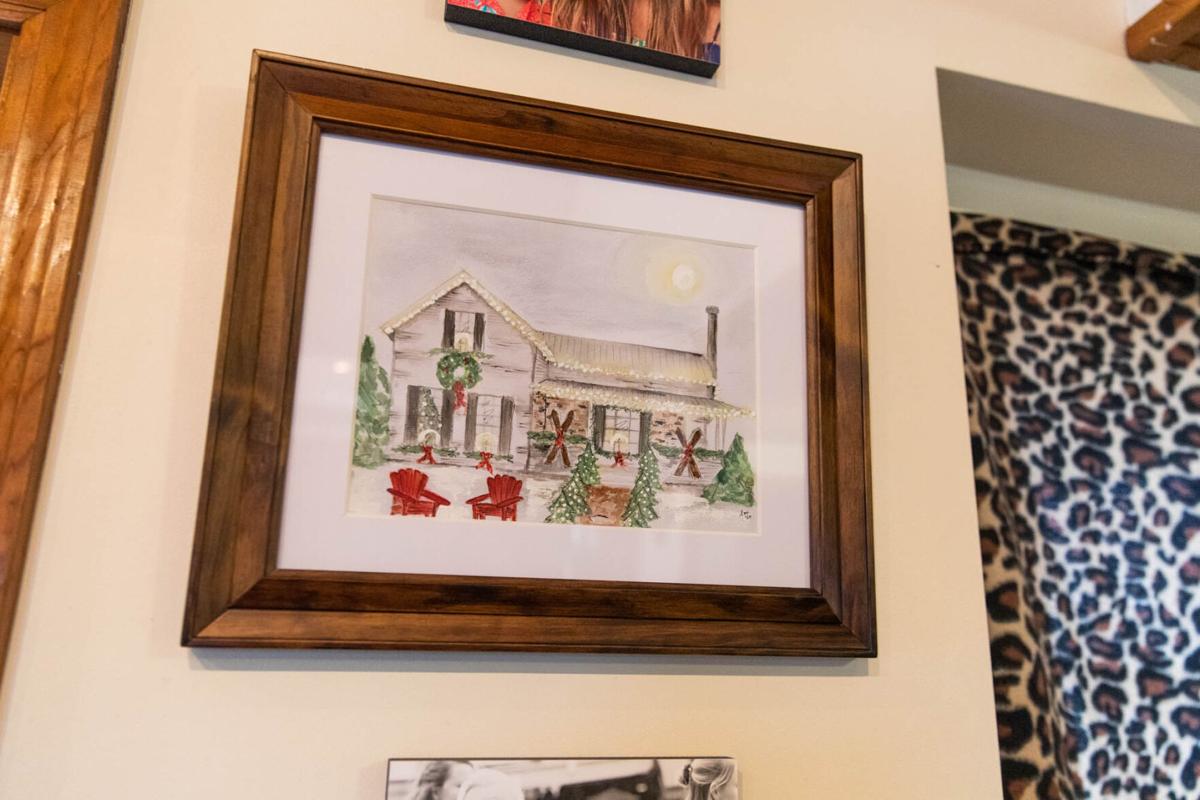 A watercolor painting of the LeBarrons’ Adirondack-theme decorations hangs on the wall in their kitchen. Sydney Schaefer/Watertown Daily Times 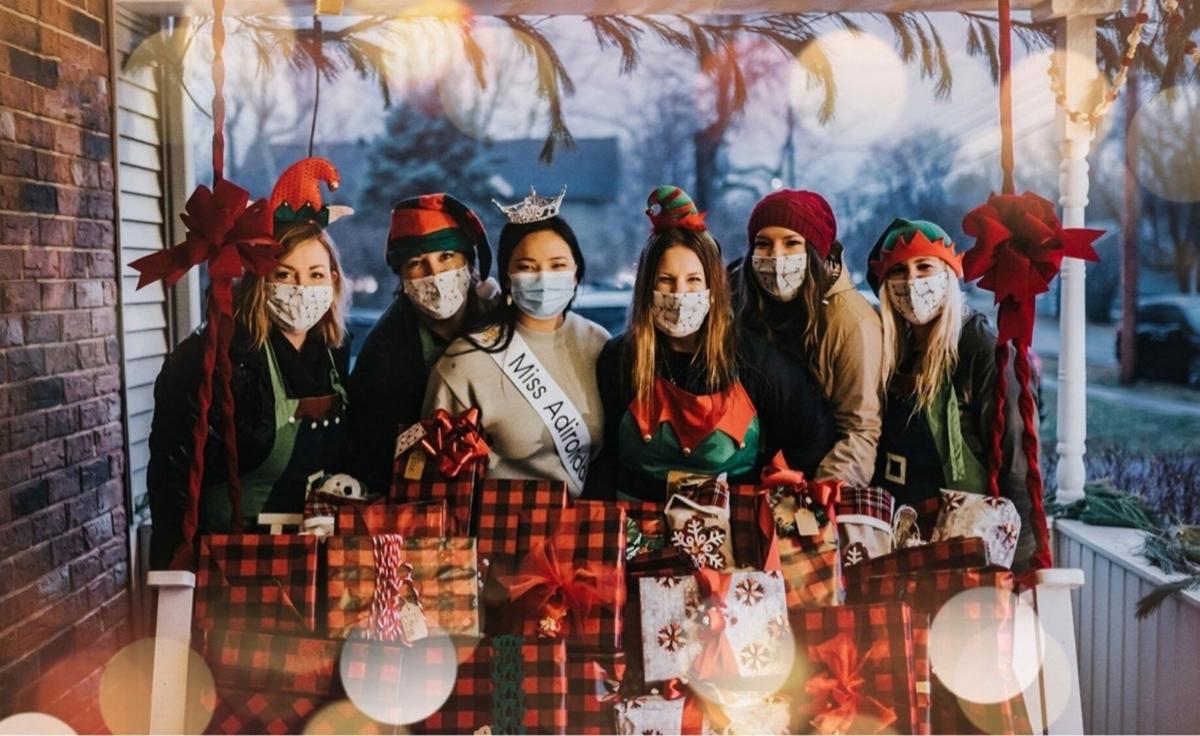 Brittany L., left, and Chase W. LeBarron, of Black River, hold their foster kids, Naomi, 2, left, Aleeah, 4, and Ethan, 5, as the family stands together in front of their Adirondack-theme decorated home along North Main Street on Wednesday afternoon. The children’s faces are not shown because they are in foster care. Sydney Schaefer/Watertown Daily Times

The LeBarrons’ home along North Main Street in Black River is decorated with an Adirondack-theme on Wednesday afternoon. Sydney Schaefer/Watertown Daily Times

BLACK RIVER — For a winter retreat without the travel, a group of local “elves” had a Christmas mission this year. They decorated a Fort Drum family’s home and created an Adirondack cabin-themed winter wonderland that earned the second-place spot in an international decorating competition.

Chase W. LeBarron is a sergeant in the Army and will mark six years of service in January. Originally from New York, closer to the Albany area, he and his wife Brittany L. began fostering children in Fort Hood, Texas, a few years ago, and are currently fostering three children they hope to eventually adopt: Ethan, 5; Aleeah, 4; and Naomi, 2.

The two have been licensed to foster since last November and have had the kids living with them now since the end of last December.

With the kids and purchasing a home, the LeBarrons want to stay in the area, even if Mr. LeBarron re-enlists.

The LeBarrons were nominated to have their home decorated and the wishes on their Christmas list fulfilled not only by Mrs. LeBarron herself, but by 12 others finding the foster couple deserving.

“The elves that came out here and helped us, they didn’t have to,” Mr. LeBarron said. “I don’t know how they got nominated to come out and help us, but they came out here and did an outstanding job. They were a riot, always smiling.”

The decorating competition all came about as part of Moving with the Military’s ongoing efforts to serve military families. A home improvement and lifestyle series dedicated to helping military families turn a house into a home, Moving with the Military was created by Army wife Maria Reed, the 2019 Armed Forces Insurance Army Spouse of the Year, and provides no cost room — or sometimes full home — makeovers for soldiers and their families.

Featured in multiple magazines and on various TV shows for her efforts, Mrs. Reed and Moving with the Military were recently part of The Today Show with Hoda & Jenna, with the segment focused on the series’ newest project: to decorate the homes of 10 families across the nation, from the East to West Coast, and even one all the way in Germany, for Christmas.

Mrs. LeBarron became familiar with the Moving with the Military Facebook page years ago while living at Fort Hood.

“As soon as she (Maria Reed) posted, we knew about the competition, but we don’t ever win anything, so I didn’t think we would win,” Mrs. LeBarron said. “Then Maria called us at the end of November and told us we’d won.”

With 10 homes in 10 widespread locations, Mrs. Reed wouldn’t have been able to pull off the decorating and wish-granting alone, instead enlisting teams of “elves” in each location to go out and decorate and compete against each other for both bragging rights and cash prizes to be put back into their communities.

Contacted to be the leader of the Fort Drum area team, Brittany A. Raines had worked with Mrs. Reed for GivingTuesday Military, and took to her new role as elf leader and hit the ground running. She said the team decided on an Adirondack cabin theme to highlight the north country and make it homey for the LeBarrons.

“None of us really knew each other as an elf team, so it was kind of cool coming together as just a military spouse group giving back to a military family and the community,” Mrs. Raines said. “I’m all about that ripple effect and what it really looks like to give of yourself and your time, especially during the holidays.”

The team got together mid-November and met once via Zoom and once in person to come up with everything, then pulled off all the decorating in about a day and a half after Thanksgiving.

Adorning the LeBarron home on North Main Street and its front garden are Red Adirondack chairs, a fire pit, miniature skis, abundant greenery donated by Martin’s Greenhouse, lanterns and the soft white lights that tie it all together.

Once the homes were all decorated by the beginning of December, photos of each were posted to Facebook for people to vote for their favorite by liking or reacting to the photo of the home they liked the most.

Before voting closed at 11:59 p.m. Tuesday, the LeBarron home was close to the top spot, competing with a home from Arkansas.

The next morning, on the Moving with the Military Facebook page, it was announced that the Arkansas home won and the LeBarron home took the second spot, with more than 1,200 likes and heart reactions, earning both bragging rights and a $300 cash prize for the local elf team to put back into the community in some way.

This is the competition’s inaugural year, and since it’s garnered such success, Mrs. Reed has said she wants to shoot for decorating the homes of 20 families next year.

As for the LeBarron family’s wish list, it was given to Moving with the Military and Caliber Home Loans, Inc., which sponsored the decorating of the 10 homes, so most of the items, if not all, were purchased for them.

During the decorating process, Mrs. Raines shared that the kids wanted to be involved in everything, constantly asking if they could help.

The elf team all wore elf hats, so the three children were enamored by the fact that elves showed up to decorate their house.

“I’m positive they thought we were straight from the North Pole,” Mrs. Raines said.

The kids were speechless when they saw the decorations outside their home, and the gifts purchased just for them.

Another more permanent gift for the family came in the form of a watercolor painting done by one of the elves, Lisa McIntosh.

Long after the decorations are gone and Christmas is over, the family can remember this experience when they look at the painting hanging on their kitchen wall, surrounded by various family photos.

After winning the chance to have their home decorated and receiving the holiday magic that came along with it, the LeBarrons expressed their gratitude Wednesday to Mrs. Reed for holding the competition, as well as the elves and community members who made it all possible.

“It means more to me that people care outside of the military, just people looking out for us,” Mr. LeBarron said. “It was nice, it’s a woman who takes her own time and tries to do something special for the people who work in the military.”