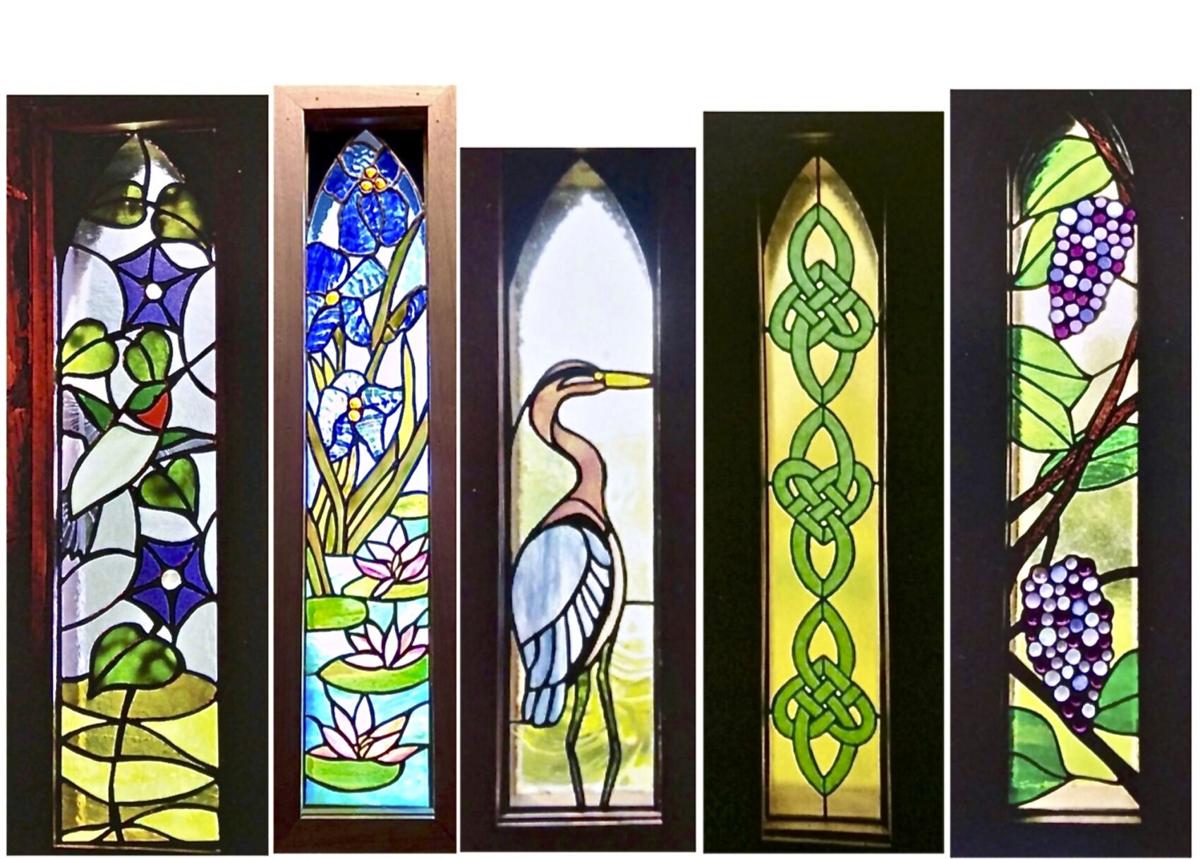 Five of the 18 windows in Casey’s Cottage, all of which are for sale as individual note cards to benefit the Friends of Mexico Point Park. Photos provided. 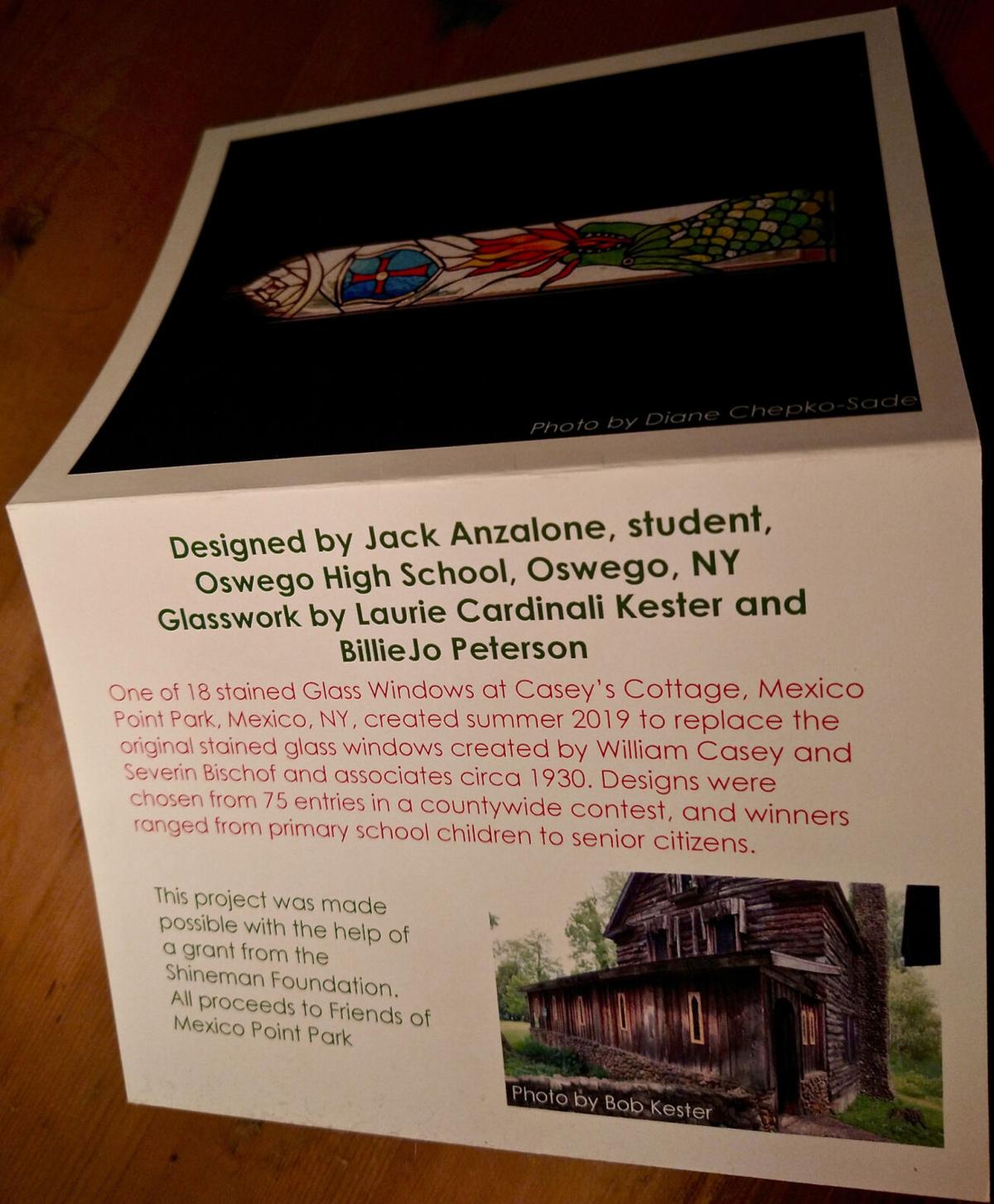 The Dragon window note card, front and back. Photo provided.

Note cards for sale in rack at Mom’s Attic in Mexico. Photo provided. 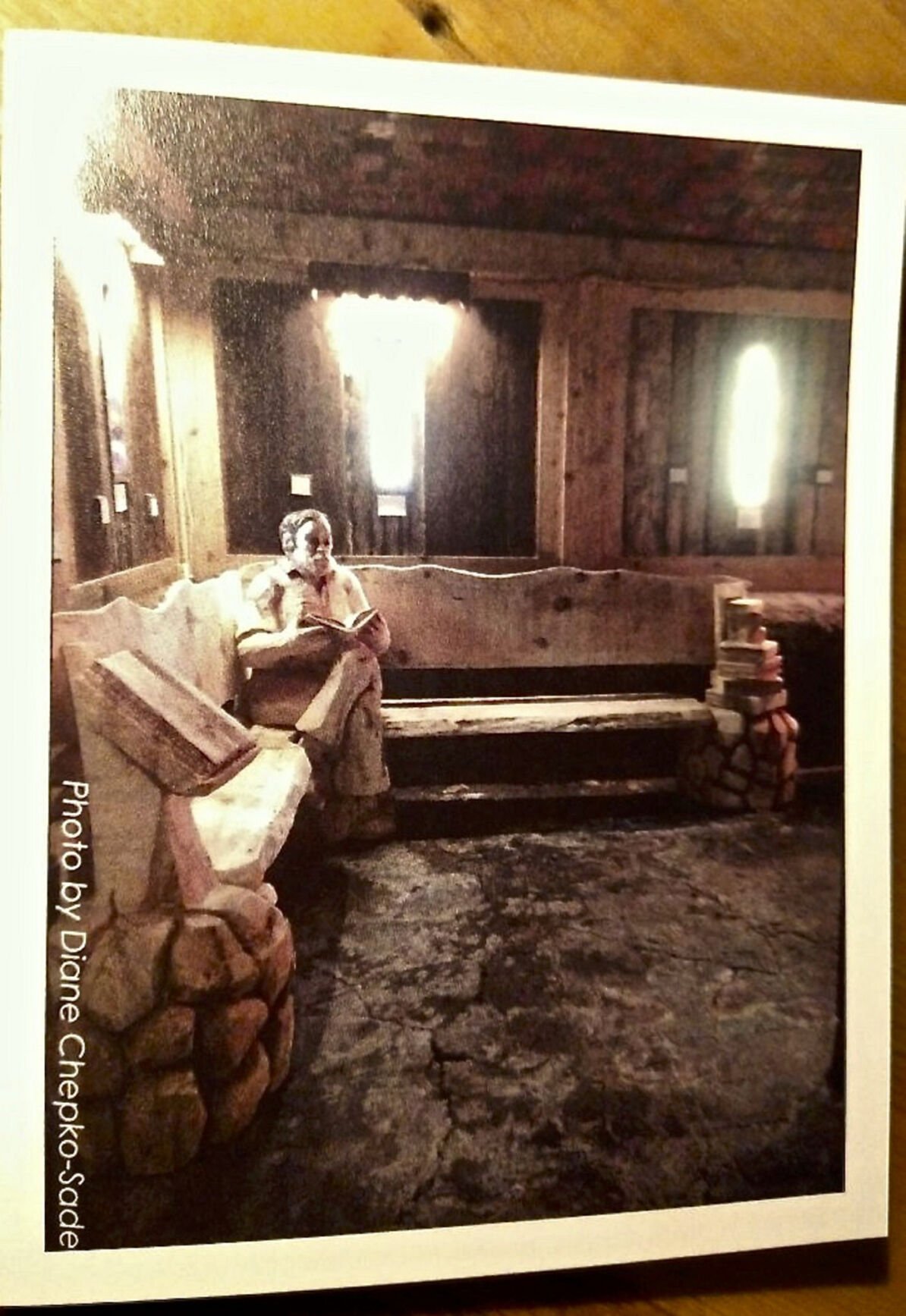 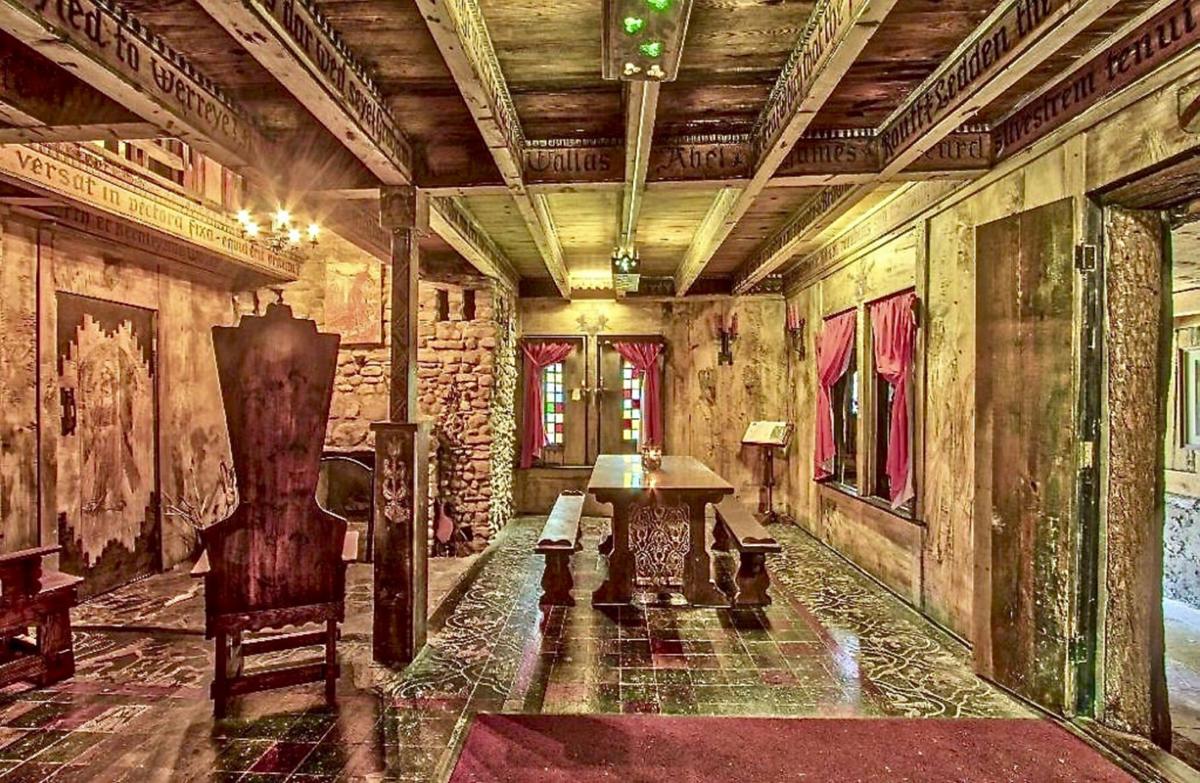 Five of the 18 windows in Casey’s Cottage, all of which are for sale as individual note cards to benefit the Friends of Mexico Point Park. Photos provided.

The Dragon window note card, front and back. Photo provided.

Note cards for sale in rack at Mom’s Attic in Mexico. Photo provided.

MEXICO — Time takes its toll. Casey’s Cottage, originally the carriage house of the elegant Mexico Point Club House built in 1906, is rather dark these days but charming nonetheless. That quaint beauty will soon be easier to see, if all goes well with a fundraising effort to improve the interior lighting, adding back a cheerfulness that most certainly was once there and enabling us once again to feel the comradery and social spirit of the vibrant gathering place Columbia Professor William Casey of New York City called home for the summer months of many years from the 1930s to the 1970s.

The interior décor is more or less in a medieval mode with carvings of kings and queens in the wooden walls and carvings of Latin sayings in the ceiling’s wide wooden beams. And when all the windows are open on a bright day, you can actually see the detailed work of Casey’s friends and students. But on an overcast day with the windows closed, good luck. And that’s where the new and upgraded lighting comes in. LEDs will replace the aging fluorescents and incandescents. Their intensity will be controllable, and they won’t get hot, thereby increasing safety.

The cottage won’t be lit up too much. “We want to maintain the ambiance,” Diane Chepko-Sade, president of the Friends of Mexico Point Park said, “but we want it light enough that people can see the carvings and the paintings.”

Along with those very skillful carvings, the cottage’s craftsmen took it upon themselves to install 18, sort of, stained-glass windows, a perfect example of how a skill in one thing does not necessarily translate to another. The whole thing was rather a poor attempt at best. They had no real design. It’s hard to even call them abstract. Perhaps more like random, chance, whatevers literally held together with roofing tar, and certainly not able to hold up over the years.

So, the Friends of Mexico Point Park requested design submissions for new windows from members of the Oswego County community. They received 75 and whittled those down to a final 18. It is those 18 designs, that over the past year were made into beautiful stained-glass windows, that are now on note cards being sold to raise the funds to light the cottage. Rather apropos that objects meant to bring in a beautiful form of light should be used to bring in even more. And apropos too that some of the glass from the cottage’s original windows was used in the new windows made by people who actually knew what they were doing. Most of them are the work of two people or more, one or two designing the window and one or two or even three people building the window from that design.

Laurie Cardinali Kester, a long-time local stained-glass worker of great skill and taste, who turned many of the chosen designs into actual windows, designed and built a delicate and peaceful window of blooming water lilies and what appear to be blue irises rising above them.

Fourth-grader Andrew Becker, older brother of Henry, designed the intricate “Knots” window based on a Celtic knot design and also built by Adriana Becker. Quite the stained-glass family. Look out Tiffany.

“Abigail’s Sword” was designed by 10-year-old Abigail Roberts with the glasswork completed by Laurie Cardinali Kester.

Youth certainly deserves a lot of praise here for their efforts, but age was not to be denied its rightful place. The oldest designers whose work is represented among the 18 windows are two ladies from an assisted care facility in Pulaski, each over 80. Arlene Filicia and Gloria Carter, with help from Karen Ringwald designed the “Hummingbird” and “Horses” windows. Diane Chepko-Sade constructed the glasswork for both windows. “Horses” is a bit different from all the others. Chepko-Sade created the horses using a fused glass technique of pouring bits of powdered blackish glass over the green glass background and pushing it around with a paint brush into the shape of the horses. It then went into a kiln where, under the high temperature, the black horses fused to the green glass. When you see the window or the card of it, you’ll understand why it could never have been created using standard stained-glass techniques. Its detail is far too delicate.

In all, the Friends of Mexico Point Park are hoping to raise $2,500 from the sale of their note cards. You can see all of the cards on their website at mexicopointpark.com/wp/?page_id=28 and you may be able to buy them there too. You can definitely buy them at Mom’s Attic at 3269 Main St. in Mexico across from the Mexico Public Library. Mom’s Attic is open noon to 4 p.m. Thursdays, Fridays, and Saturdays. The note cards, with a photo of one of the 18 windows on the front and a description on the back, open up to be written on the blank inside. Three cards can be had for $10.