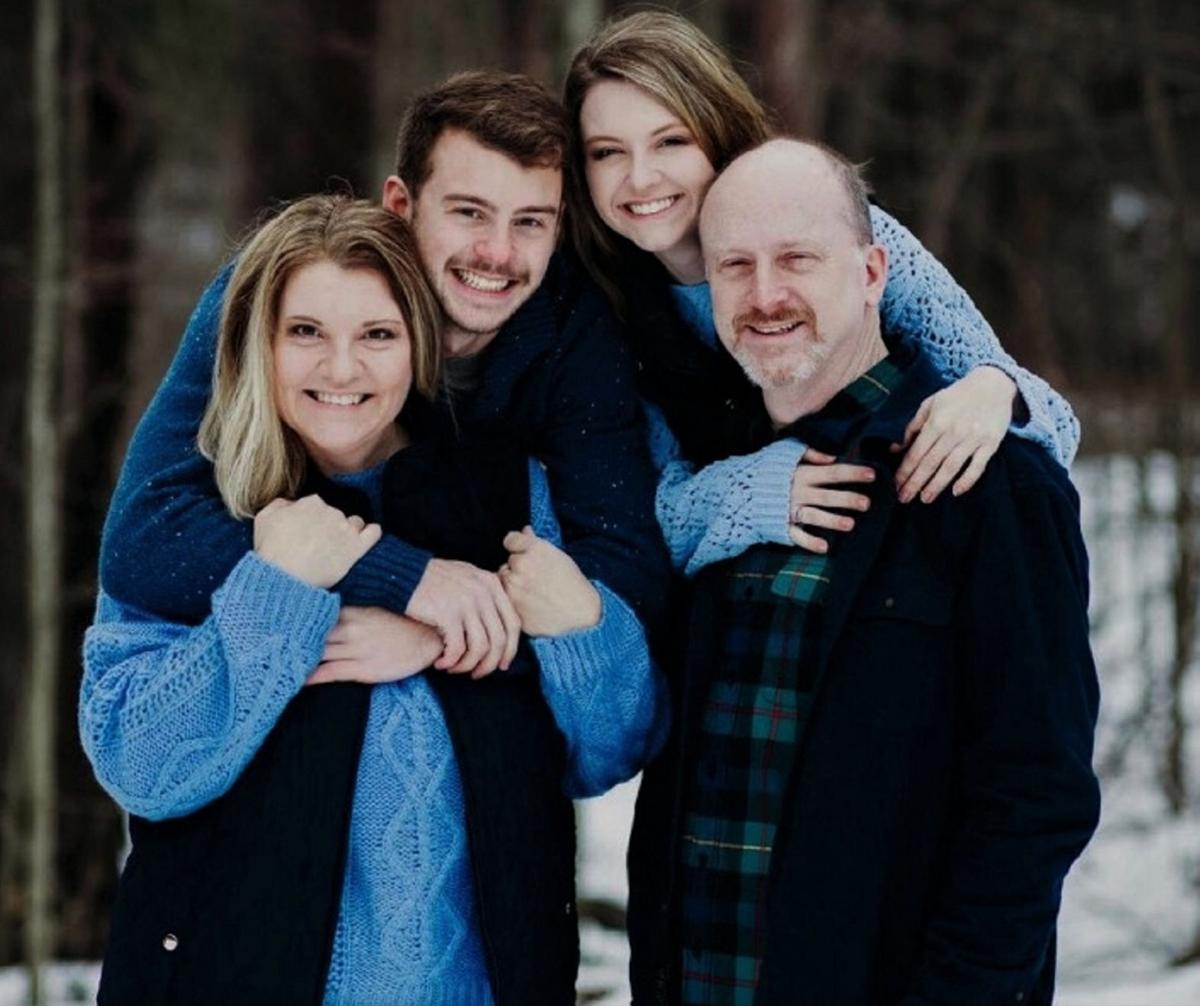 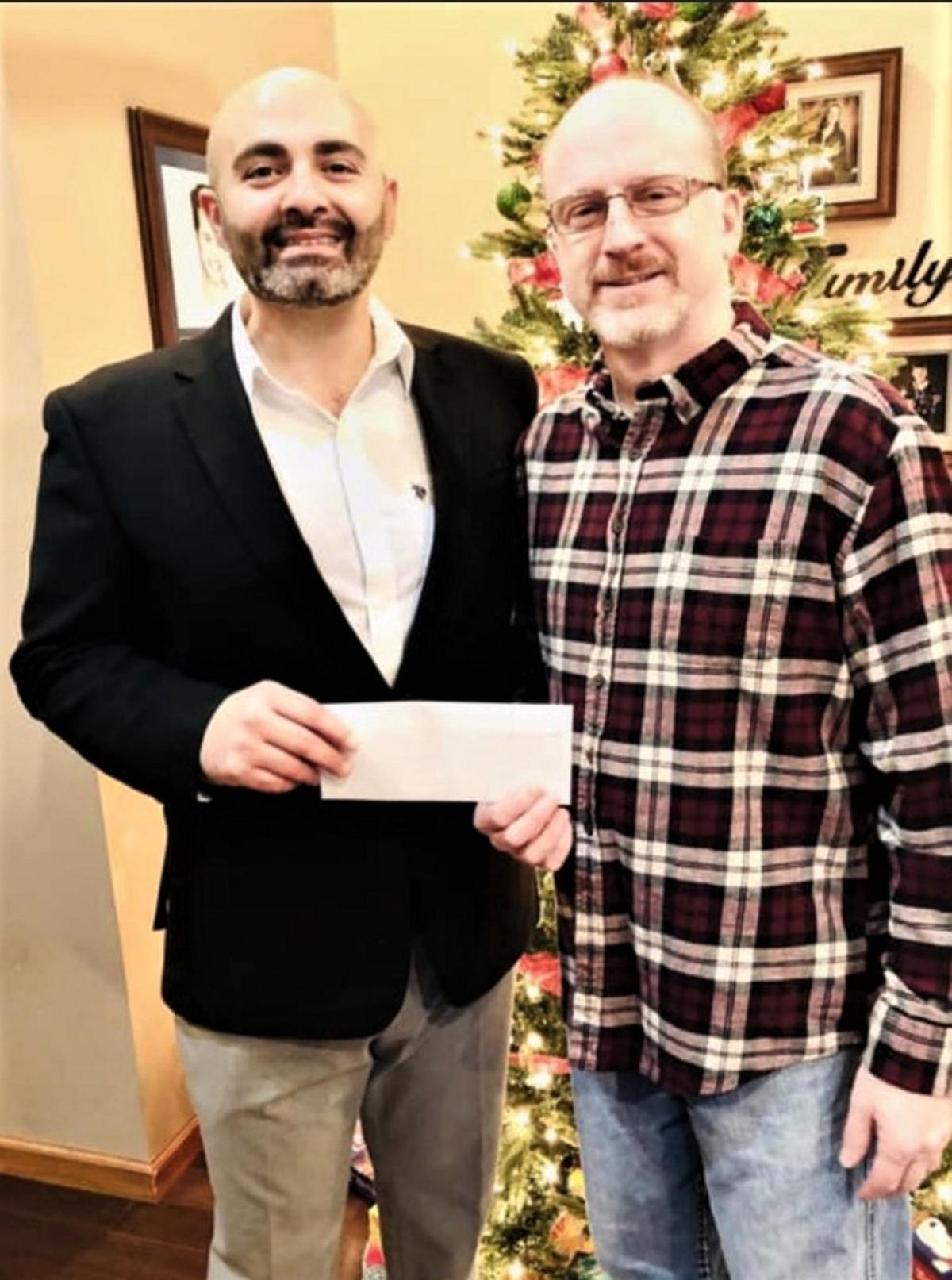 Dr. Reed Attisha, left, poses alongside Ed Fish, right, after presenting him with a check for $16,000 that was raised through a Facebook fundraiser. Provided photo 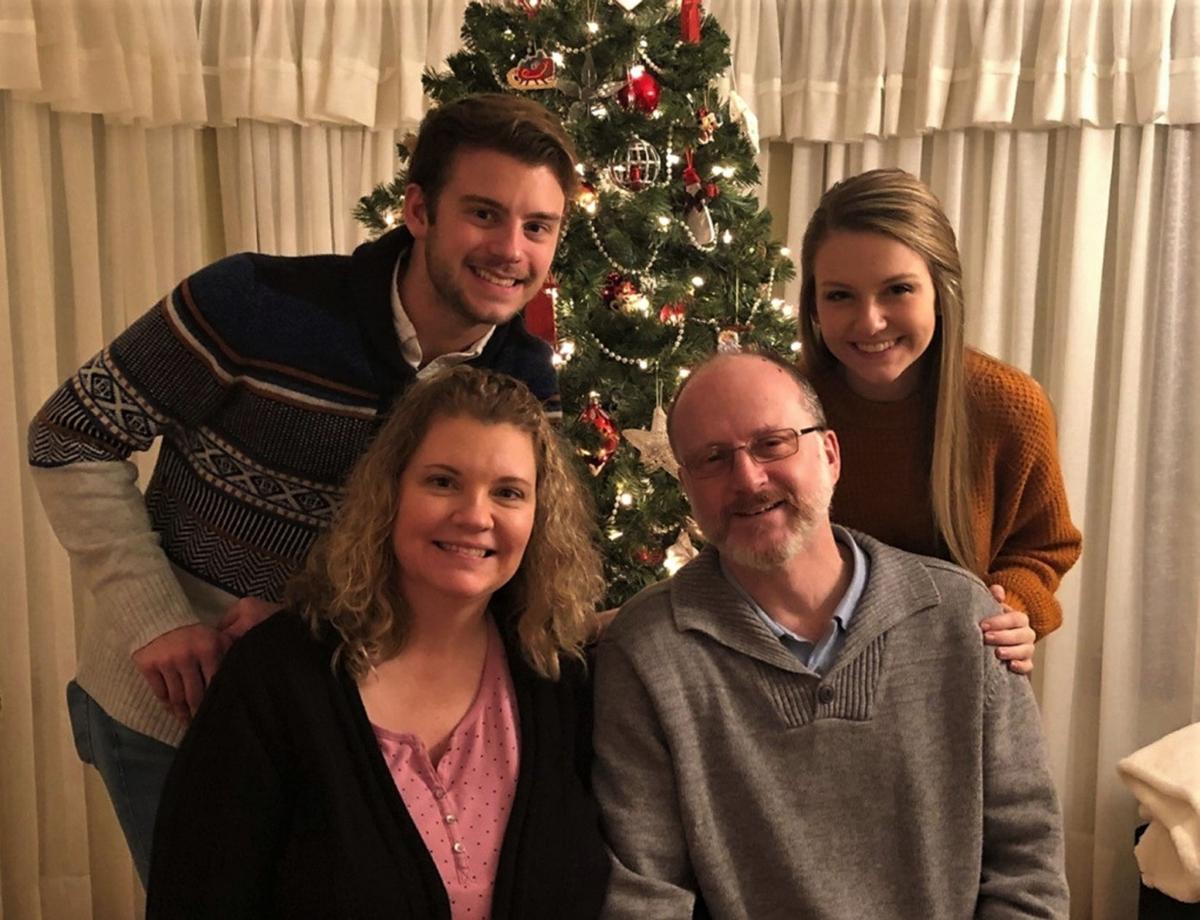 The Fish family poses for a photo in front of their Christmas tree. From left to right: Ethan, Kristen, Ed and Rachel Fish. Provided photo 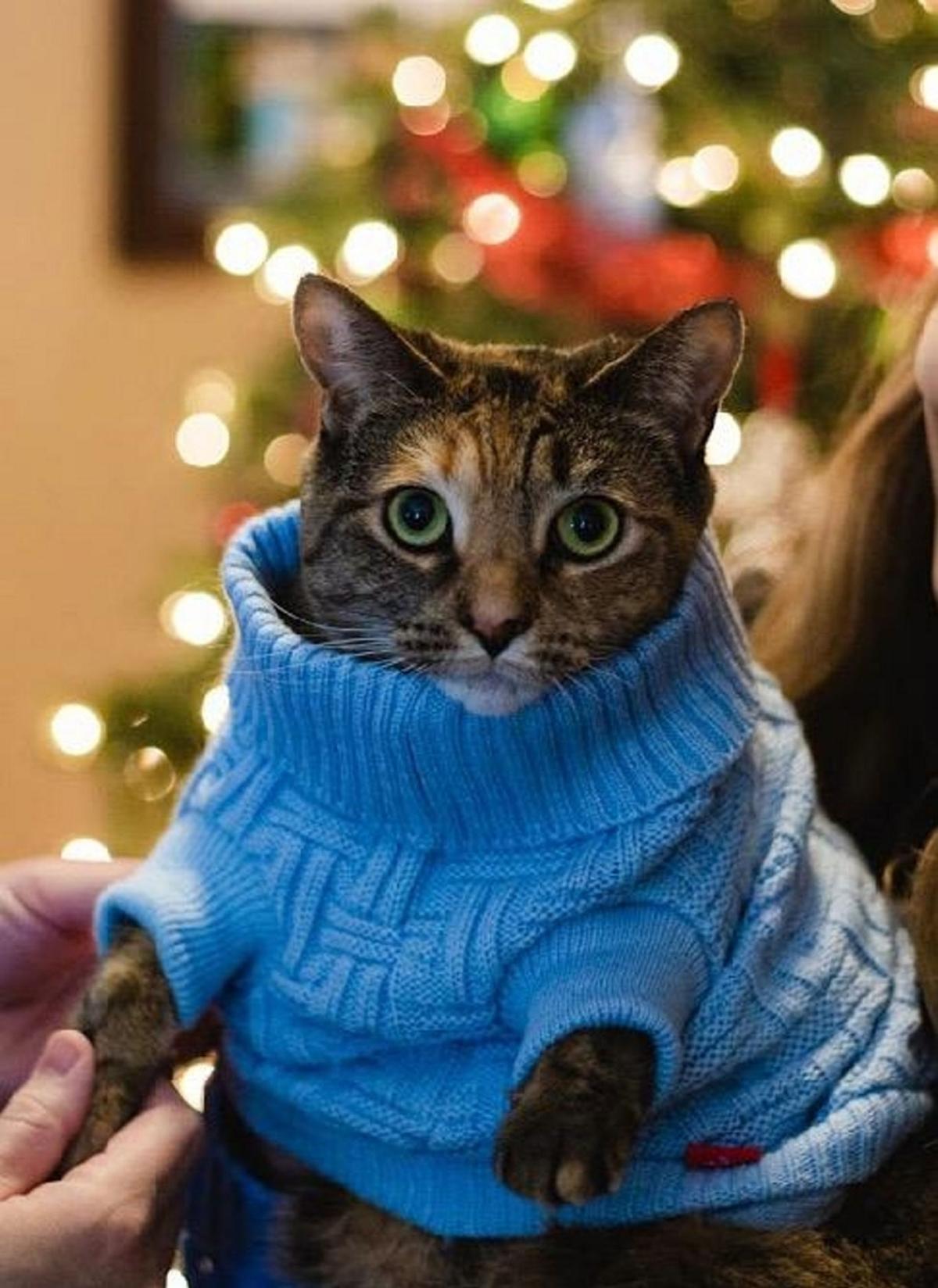 The Fish family’s furry fifth member, Ellie, who has been cuddling up to Mr. Fish often during this trying time. Provided photo.

Dr. Reed Attisha, left, poses alongside Ed Fish, right, after presenting him with a check for $16,000 that was raised through a Facebook fundraiser. Provided photo

The Fish family poses for a photo in front of their Christmas tree. From left to right: Ethan, Kristen, Ed and Rachel Fish. Provided photo

The Fish family’s furry fifth member, Ellie, who has been cuddling up to Mr. Fish often during this trying time. Provided photo.

WATERTOWN — After a local oral surgeon created a Facebook fundraiser in the hopes of raising some money for his friend and employee who had received a poor prognosis, it went “viral” and was shared hundreds of times, with people from five different countries donating to the cause.

Reed Attisha, M.D., D.M.D., an oral and maxillofacial surgeon at Oral Surgery of Northern N.Y., has known Edwin “Ed” Fish for several years, and the two have been working together in the office since 2013.

According to Dr. Attisha, Mr. Fish, a staff nurse, is well known throughout the office and all locations as the jokester, the one who can turn stressful situations around by lightening the mood.

“When you have a guy with the last name of Fish, who works in Watertown and lives in Sandy Creek, it’s naturally funny,” Mr. Fish said. “We’ve gotten notes at the office about doctors with great skills and the funny nurse.”

Mr. Fish was diagnosed with glioblastoma on his thalamus in November and began his first round of radiation and chemotherapy on Dec. 16. This first round is set to wrap up on Monday, though he will need to have more chemotherapy after that. According to the Mayo Clinic, glioblastoma is an aggressive type of cancer that can occur in the brain or spinal cord and forms from cells called astrocytes that support nerve cells. Glioblastoma can be very difficult to treat and a cure is often not possible, though treatments may slow the progression of the cancer and reduce signs and symptoms.

“It’s in a location where even the best surgeons won’t operate,” he said. “The effects on me would be devastating in terms of abilities I would lose.”

Kristen Fish, Mr. Fish’s wife of 30 years, is a teacher in South Jefferson and said that after the initial diagnosis there was a lot of fear and anxiety, but the family is trying to look at the treatment as a positive and remain hopeful.

As can be expected, she said her husband has good days as well as bad days, though he tries to keep a positive attitude as much as possible and is careful to follow instructions from his doctors.

Due to the inoperable nature of the cancer, treatment was the only option. After Monday’s last radiation treatment, Mr. Fish will have four to six weeks of rest and then start back up with chemo — an even stronger version of what he’s been doing.

“When I walk into treatment everyone knows me and calls me by my first name,” he said. “When they ask how I’m doing today my response is ‘any better and I wouldn’t be here.’”

In those four to six weeks, Mr. Fish will still be dealing with the effects of the radiation, but the break will give his body a chance to start healing itself and regrow the good cells.

According to Mr. Fish, his doctors are talking about possibly doing a new treatment with a machine called Optune, which he says is very expensive per month, but could keep the cancer from growing and expanding or reduce its effects.

“I always joked around with my friends that I’m short on hair on the top because I’m nearly bald, and now I’ve lost the hair on the left side where the treatments were concentrated,” he said. “I never realized how much it bothers me, losing what little hair I did have.”

Mr. Fish, only 52 years old, has had to completely stop working for the foreseeable future because his treatments have left him tired and in need of lots of rest. His last day of work was Nov. 13.

Dr. Attisha began the Facebook fundraiser in the beginning of December as a small gesture to help out the family. Though he had never done one before, he said the idea just came to him one day and so he went on Facebook and followed the instructions to set up the fundraiser.

The fundraiser, which ended on Dec. 22 because Facebook allows a three-week period for open fundraisers, brought in 400 digital and physical donations from people in the United States and Canada, as well as Great Britain, Italy and France, and raised $16,000.

“Nobody wants to see an oral surgeon, so unless they’re getting knocked out, they’re nervous,” Dr. Attisha said. “Ed is the perfect guy for the job, he makes them comfortable and at ease with the situation, and all the patients and employees love him — that is THE guy you can depend on.”

Though Mr. Fish may be an employee and occasional patient of Dr. Attisha, he is much more than that, and the two are close friends outside of the office. Dr. Attisha said the Fish family is like his own family, and both families have spent holidays and dinners together.

Outside of work, Mr. Fish still uses humor to lighten the mood, but is also the first to help anyone with anything.

“Ed is a special person, someone who wakes up in the morning each day with a goal to make you smile and brighten your day,” Dr. Attisha said. “We are all stunned and saddened by his poor prognosis.”

Dr. Attisha recounted a time when Mr. Fish came to help him with his plumbing one weekend because he was out of his element and didn’t know what to do. A few weeks ago, Dr. Attisha said he went over to Mr. Fish’s house to present him with the check.

“The whole thing was incredible, I couldn’t believe it,” Dr. Attisha said. “Literally in the first day of the fundraiser I think we raised six thousand dollars.”

After that first day, according to Dr. Attisha, the Facebook messages just kept coming in, with older users asking if they could mail checks instead because they either didn’t have credit cards or didn’t know how to donate online. In an effort to spread some cheer, the choir group from South Jefferson went to Mr. Fish’s house as a surprise and went in and played Christmas music for the Fish family for two to three hours.

“That just tells you the impact that Ed has on the community for them to come and cheer him up with some Christmas spirit,” Dr. Attisha said. “It kind of stuns you and shows how generous and loving people are; that money could have easily gone to those people’s families for Christmas gifts but it didn’t — it went to Ed and that’s incredible.”

One downside of the radiation and chemotherapy, according to Mr. Fish, is they make it so his blood vessels can’t hold oxygen like they used to, so he gets winded much more easily and can’t run every Sunday like he used to.

According to Mr. Fish, people near and far have gone above and beyond for himself and his family. Various community members made meals for the family, have been coming to the Fish family home and driving Mr. Fish to treatments or wherever he needs to go, and even mailing checks outside of the Facebook fundraiser.

“My high school friends from decades ago have been coming forward to put things together and collect funds, South Jeff teachers are raising money and making food for us, and my kids’ friends have been putting money together,” he said. “I’m very glad for it.”

The couple’s two kids, Rachel and Ethan Fish, both go to Le Moyne College and regularly check in on their father as well as come back on weekends when they can. Mrs. Fish said when they were home for five weeks over Christmas vacation, they were very involved with taking care of him and taking him to appointments while their mother worked.

Money raised for the family has gone to everything from paying for the gas needed to get to and from treatments to helping cover part of the cost of said treatments that insurance doesn’t cover.

“My connections are far and wide, I never realized how far they reached,” he said. “I’m touched and grateful.”

Having been in the medical field for so long, Mr. Fish said he understands the doctors’ side of what they’re going through and putting up with his jokes.

“At times it’s difficult for me being on the other side of the stretcher,” he said. “Anyone in the medical profession knows we make the worst patients because we know what’s going on around us.”

According to Mrs. Fish, her husband has always been the one to help others and because of his long history being in EMS and nursing, it’s hard for him to be on the other side and accept help now.

“The community support has reminded us how wonderful it is to be from a small community,” she said. “It brings comfort knowing that we’re not fighting this alone and it made my husband realize how much he means to other people because so many have reached out to him.”

it is such a sad comment on the state of our medical system that anyone has to do this.