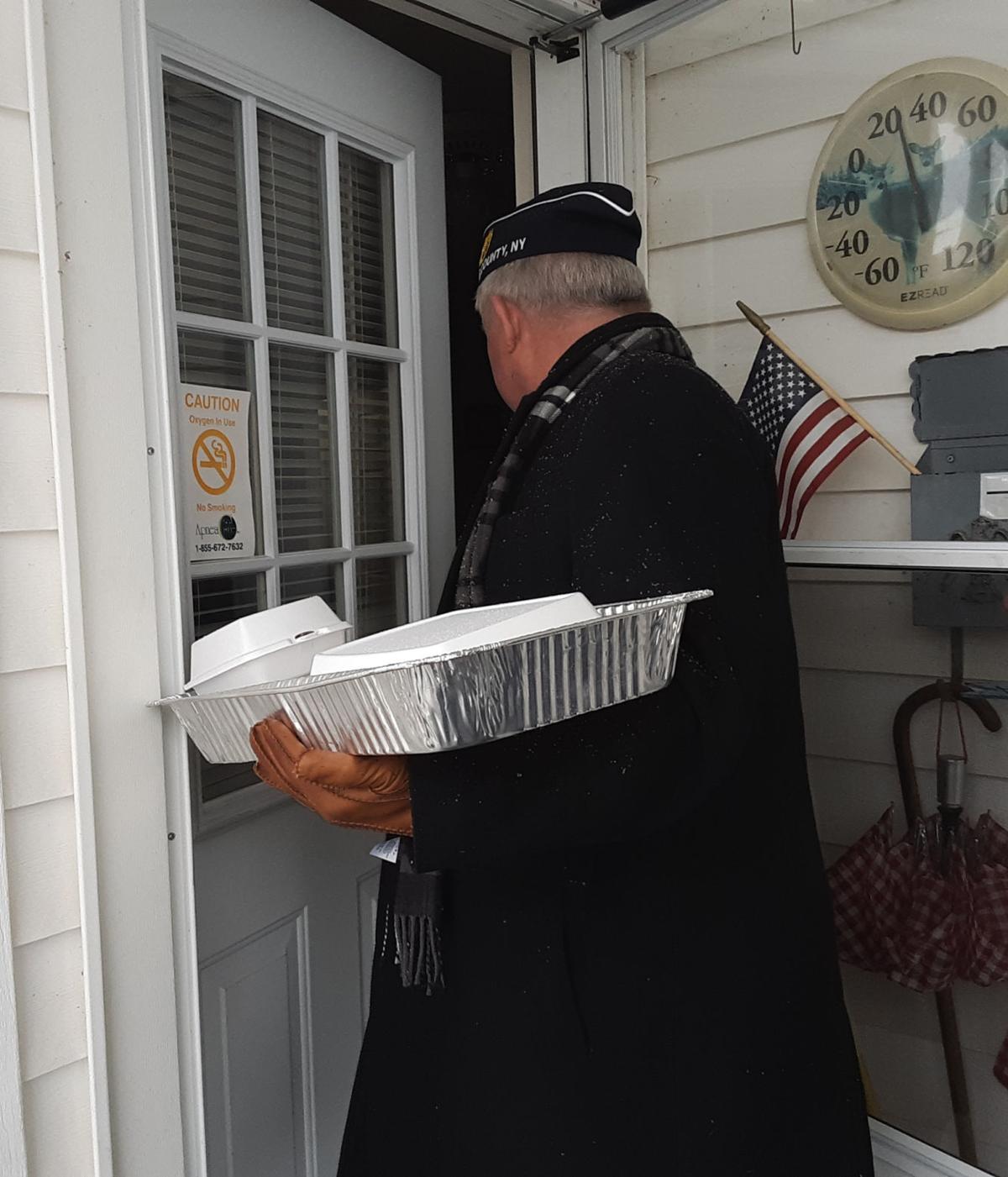 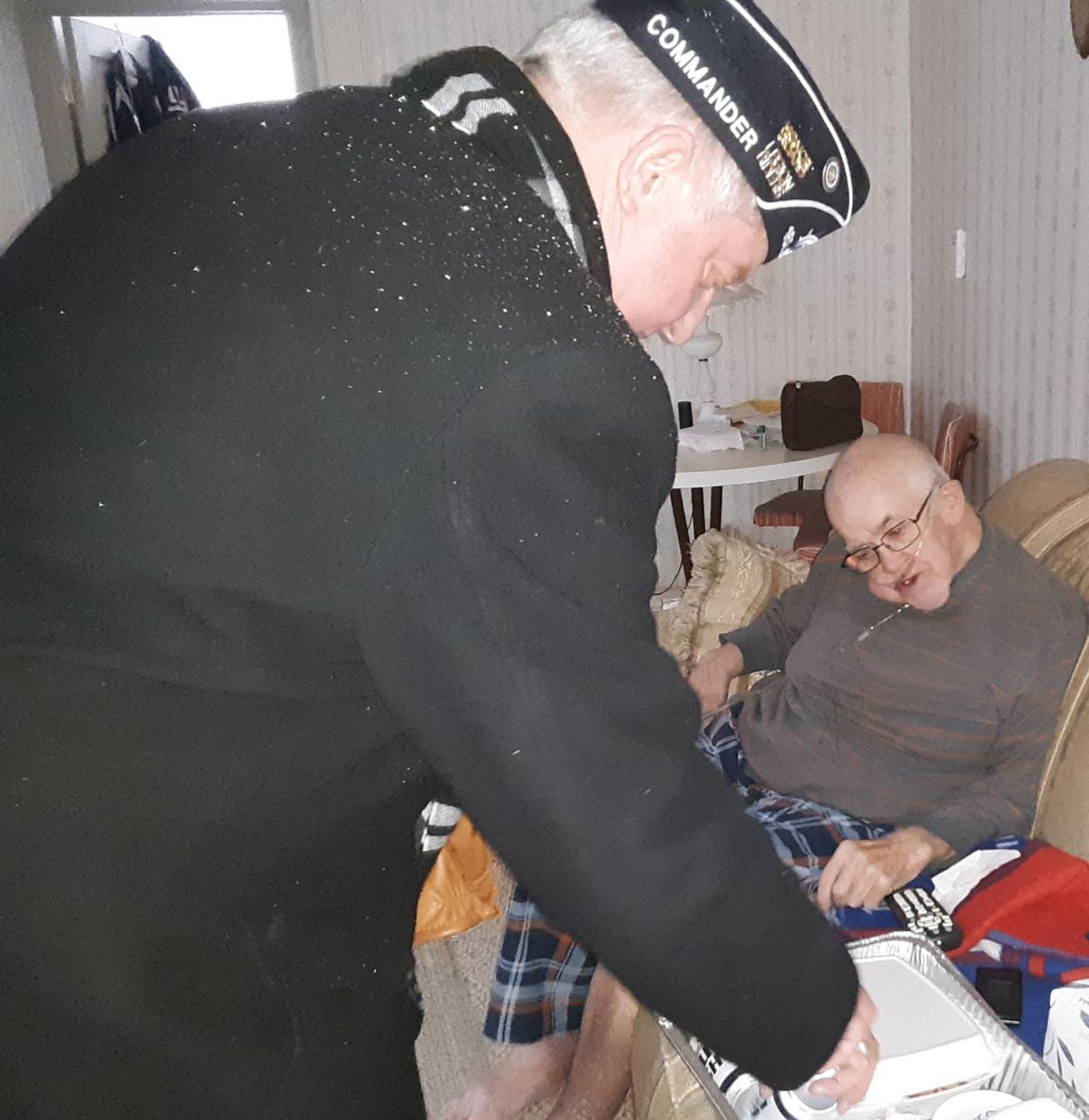 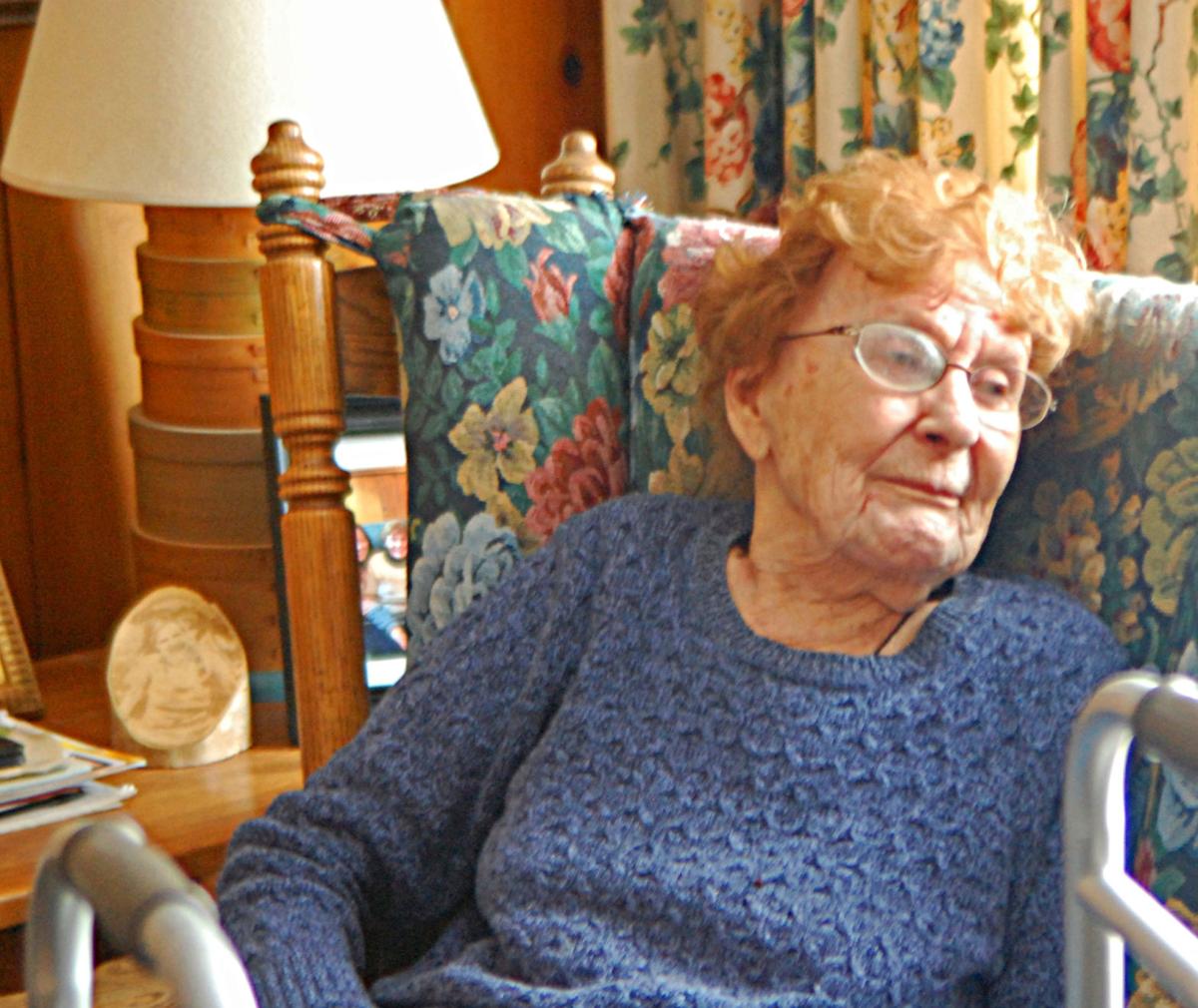 Helen Mihalyi, 91, listens to her husband of 71 years, Duke Mihalyi, tell of his time serving on the U.S.S. Grundy in the South Pacific during World War II, during a visit by members of the Lowville American Legion Post 162 on Veterans Day. Julie Abbass/Watertown Daily Times 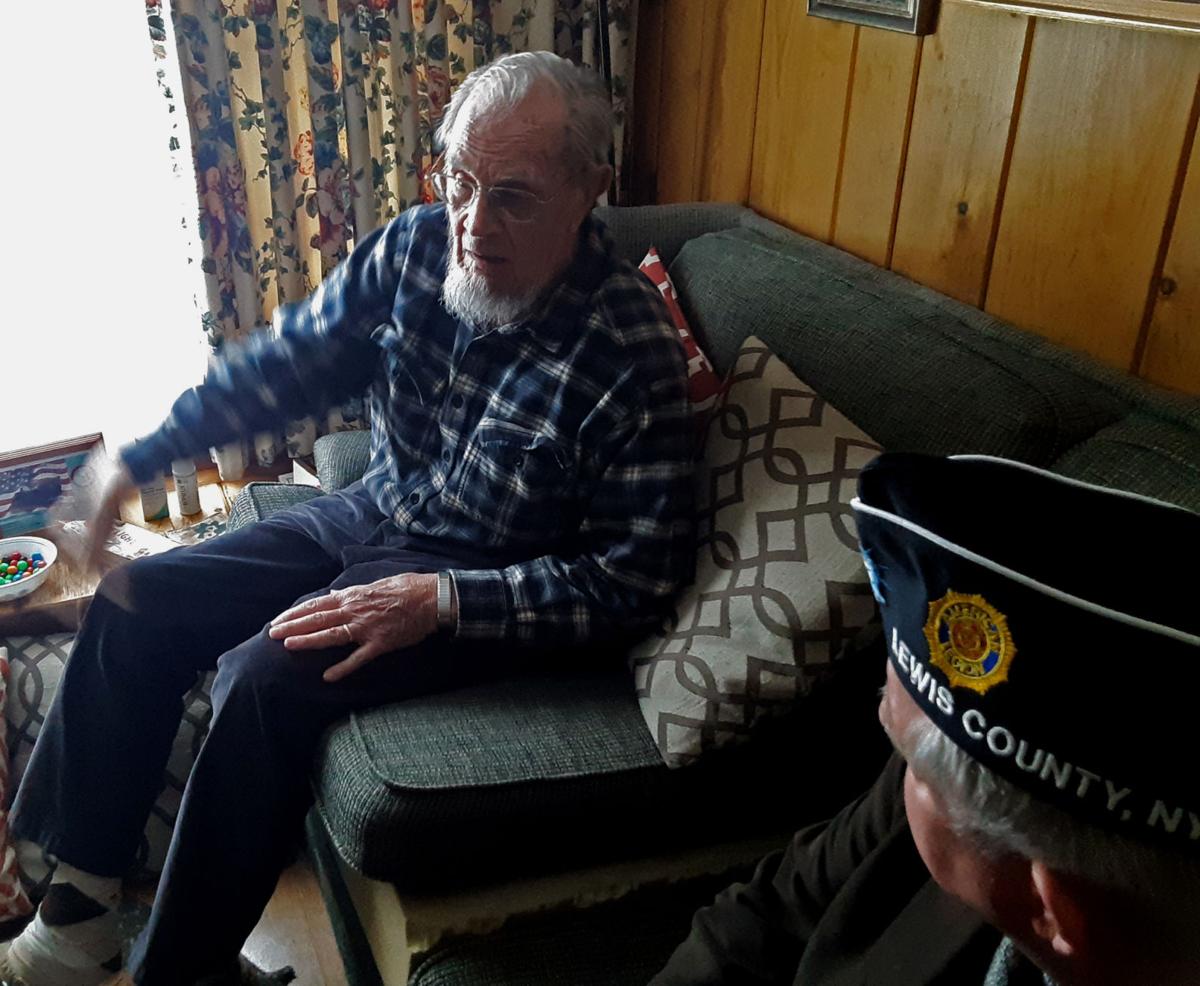 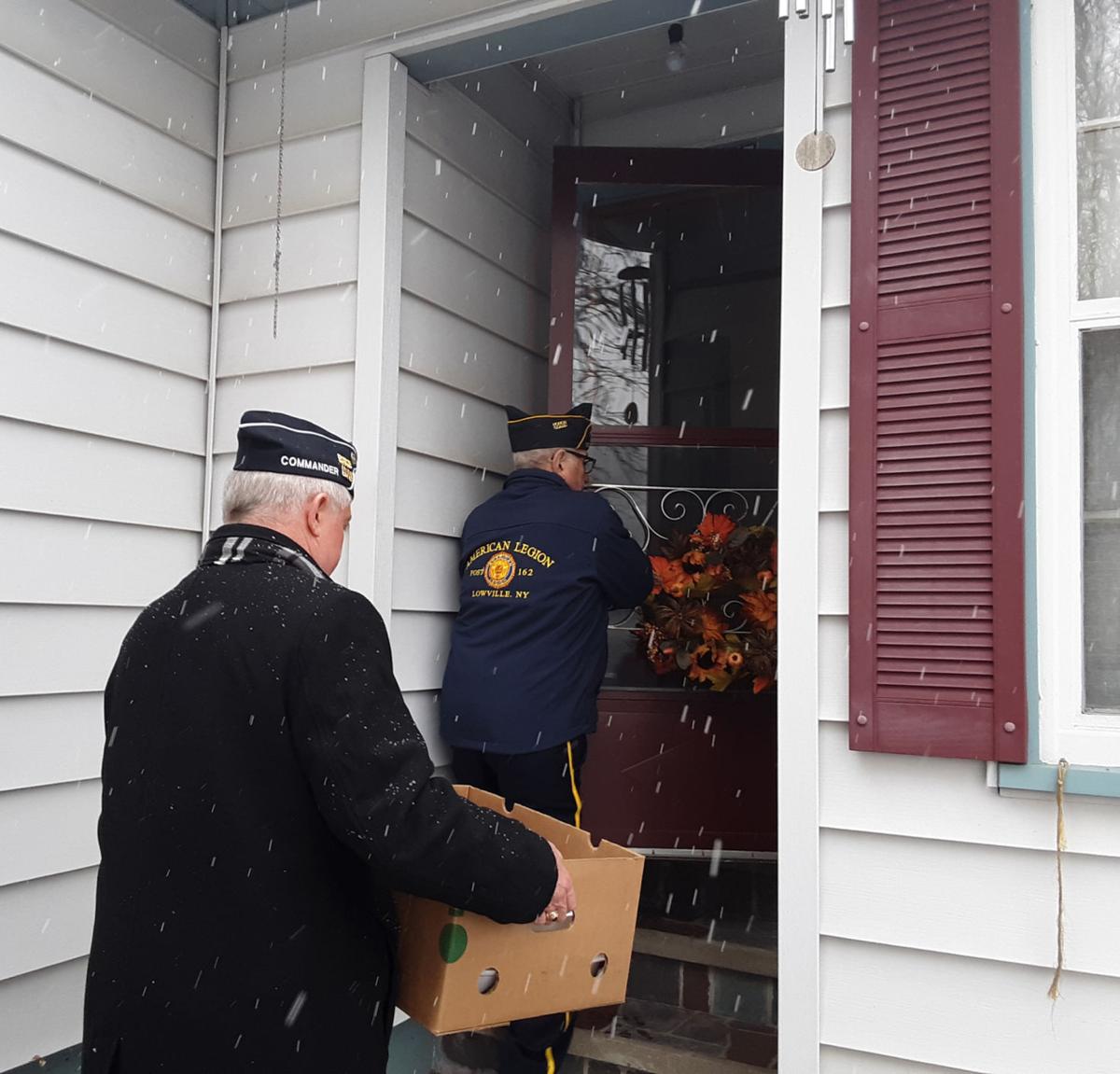 Helen Mihalyi, 91, listens to her husband of 71 years, Duke Mihalyi, tell of his time serving on the U.S.S. Grundy in the South Pacific during World War II, during a visit by members of the Lowville American Legion Post 162 on Veterans Day. Julie Abbass/Watertown Daily Times

LOWVILLE — When C. Richard Mihalyi, known by everyone as Duke, starts sharing the stories of his time in the Navy during World War II, everyone in the room smiles.

It isn’t the first time American Legion Post 162 Commander Lee Hinkleman, Post Chaplain Elwin Woolschalger or Mr. Mihalyi’s wife of 71 years, Helen, has heard these stories, but each time, Duke recounts the events with such detail and animation, they can’t resist smiling.

There are many holidays on which Legion members deliver meals to homebound veterans, those on Hospice and others in the local nursing home, but Veterans Day is one of the most important, Mr. Hinkleman says.

“Some of the people we visit get out once in awhile, and some even come to the Legion when they can, but it’s not very often and we don’t want them to think they’re forgotten,” Mr. Hinkleman said.

“We were coming up through and I’m on the helm and all of the sudden the skipper says, ‘There’s a periscope.’ Nobody had seen it,” Mr. Mihalyi said of one day on the U.S.S. Grundy in the South Pacific theater. “They didn’t bother us, but two hours later we heard this boom. We found out later it was the U.S.S. Indianapolis they were looking after and it was sunk and there were a bunch of bombs on it.”

Like the ocean waves he traveled, his stories rolled, one into the next.

“When we were off Okinawa we carried 3,000 troops to go ashore. I can remember we were at anchor this one morning and the sun was right in our eyes and here comes a Japanese plane. They dropped a bomb and gunners on the [APA attack transports] knocked it out of the air and we were just lucky. You know the old perspiration running down, we were sitting ducks. We could have been the ones that got nailed,” he said.

Ninety-one-year-old Mrs. Mihalyi says the award her husband, 93, was given as part of the Legion’s 100th anniversary commemoration is kept in a “place of honor” next to his seat on the sofa in their family room and is the first thing Mr. Mihalyi shows to visitors.

Another treasure Mr. Mihalyi often points out to visitors is the framed collage with pictures of the U.S.S. Grundy, select artifacts from his time on it, a number of facts and a photo of Mr. Mihalyi striking a pose in 1944 at the Panama Canal.

Mr. Hinkleman says that many of the vets who don’t speak much, can’t move or sit up straight immediately come to attention or start sharing stories when the Legion members visit, as if their years of training are triggered and they are ready for duty once again.

Gilbert “Gilly” Stoffle, who lives across the street from the Legion, tries to make it over as much as possible, Mr. Hinkleman says, but some days it’s more of a challenge, so today he, too, gets a meal brought to him.

Mr. Stoffle was a cook in the Navy during the Vietnam War and is listed as “Kitchen Commander” at the post.

“I cooked a big tray of mac-n-cheese for the Lowville game and it was gone by 1 p.m.” Mr. Stoffle said.

He plans to do the same for next week’s game involving Lowville Free Academy High School, his alma mater.

At the end of both visits, Mr. Woolschalger and Mr. Hinkleman thank the two men for their service, and in both cases, the men are humble.

“Back then, I didn’t think too much of it,” Mr. Mihalyi said, with Mrs. Mihalyi helping him finish, “It was just a thing he did.”

The American Legion is now accepting all veterans as members, not just those who served during wars, Mr. Hinkleman said, which will hopefully allow more outreach like this.

C. Richard “Duke” Mihalyi tells tales of escaping death by bombs and monsoons during a visit by Lowville American Legion members on Veterans Day, including Post Commander Lee Hinkleman, right, bringing meals for both he and his wife. Julie Abbass/Watertown Daily Times