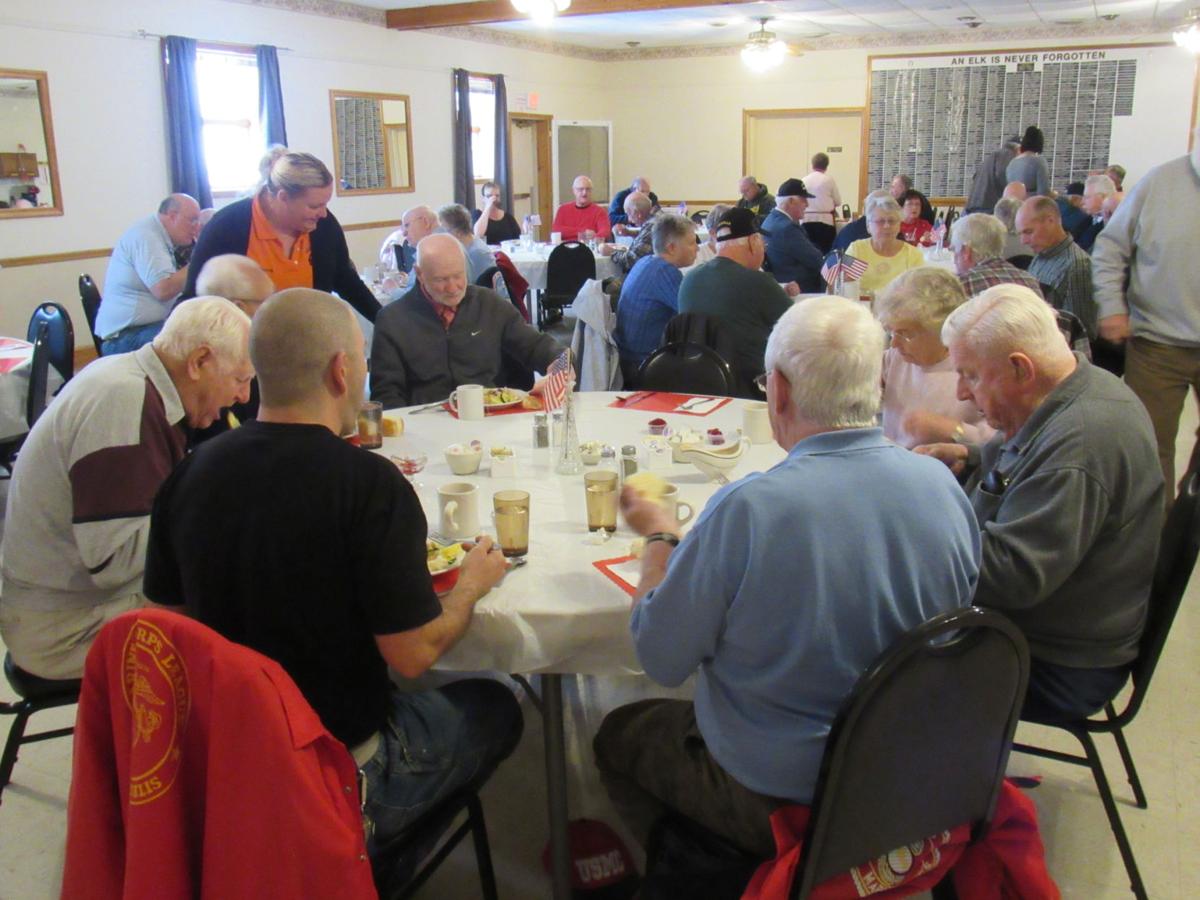 The dining room at the Massena Elks Lodge was full on Monday when the Elks offered a free turkey dinner to veterans as part of their annual Veterans Day activities. Bob Beckstead/Johnson Newspapers

Norman Lazore visits with veterans on Monday when the Massena Elks Lodge offered a free turkey dinner to all veterans in recognition of Veterans Day. Bob Beckstead/Johnson Newspapers

The dining room at the Massena Elks Lodge was full on Monday when the Elks offered a free turkey dinner to veterans as part of their annual Veterans Day activities. Bob Beckstead/Johnson Newspapers

Norman Lazore visits with veterans on Monday when the Massena Elks Lodge offered a free turkey dinner to all veterans in recognition of Veterans Day. Bob Beckstead/Johnson Newspapers

MASSENA — A Veterans Day tradition continued in Massena on Monday.

Massena Elks Lodge 1702 prepared a turkey dinner with all the trimmings, serving veterans at no charge, following Veterans Day ceremonies.

“Part of our bylaws is to take care of veterans,” said Norman Lazore from the Elks Veterans Committee.

For some members of the Elks, it’s a yearly tradition to deliver the meals to the tables, where veterans enjoy not only the food, but also camaraderie with fellow veterans. Dianne Meyer, for instance, said she has volunteered for 15 years.

Other volunteers deliver meals to veterans. On Monday, they were delivered to the Highland Nursing Home and the Massena Rehabilitation and Nursing Center, formerly the St. Regis Nursing Home. A volunteer even delivered a meal to a veteran who was staying at a hotel.

“We do anything to get meals to veterans. Our volunteers are outstanding,” Mr. Lazore said.

While meals were being delivered, the dining room at the Elks Lodge was filling up with veterans at nearly every table. He said they can typically expect a big crowd on Veterans Day, with as many as 180 veterans served each year.

“They look forward to this,” Mr. Lazore said.

That means some volunteers are busy in the kitchen before the sun rises. And, once the serving starts, it’s several trips back and forth to the kitchen for other volunteers who are delivering the meals to the tables.

Mr. Lazore also makes sure he takes time out to circle around the dining room and chat with veterans.

Exalted Ruler Zach Helmer said veterans are an important part of the Elks mission. He said a Trivia Night scheduled for 7 p.m. Nov. 22 will help with the Elks Park Harbor Fund — revitalization of the Pearl Harbor National Memorial in Hawaii — as well as the Greater Massena Chamber of Commerce’s local veteran and active military banners for Main Street.

More information on the evening is available at www.ChamberDude.com.

Elks lodges also support local youths and they show their patriotism with Flag Day programs. In 1907, the BPO Elks Grand Lodge designated by resolution June 14 as Flag Day. The Grand Lodge of the Order adopted mandatory observance of the occasion by every Lodge in 1911, and that requirement continues. In 1949, President Harry Truman made the proclamation that thereafter June 14 would be a day of national observance for the symbol of our country.