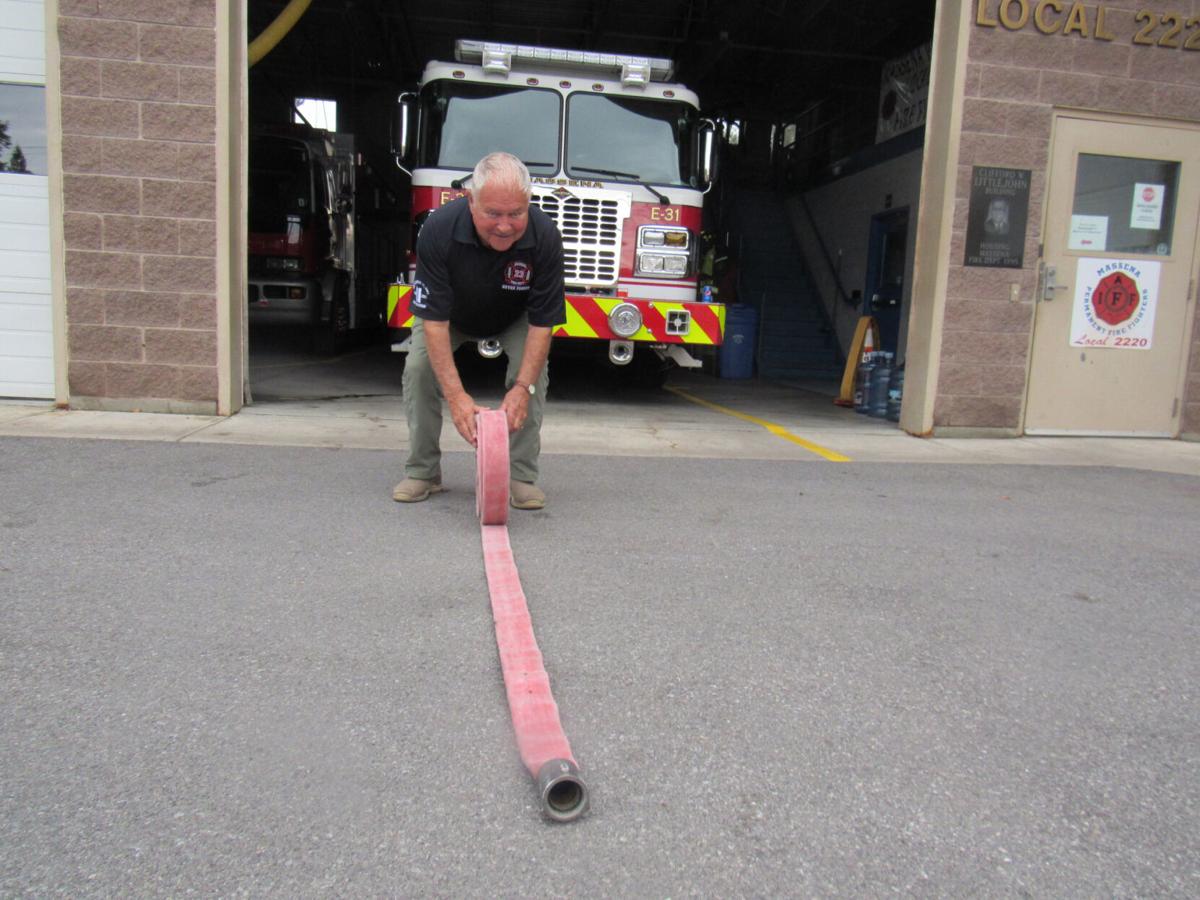 Richard “Dick” Frank shows that, even after 60 years in the Massena Volunteer Fire Department, he can still roll hose. Bob Beckstead/Watertown Daily Times 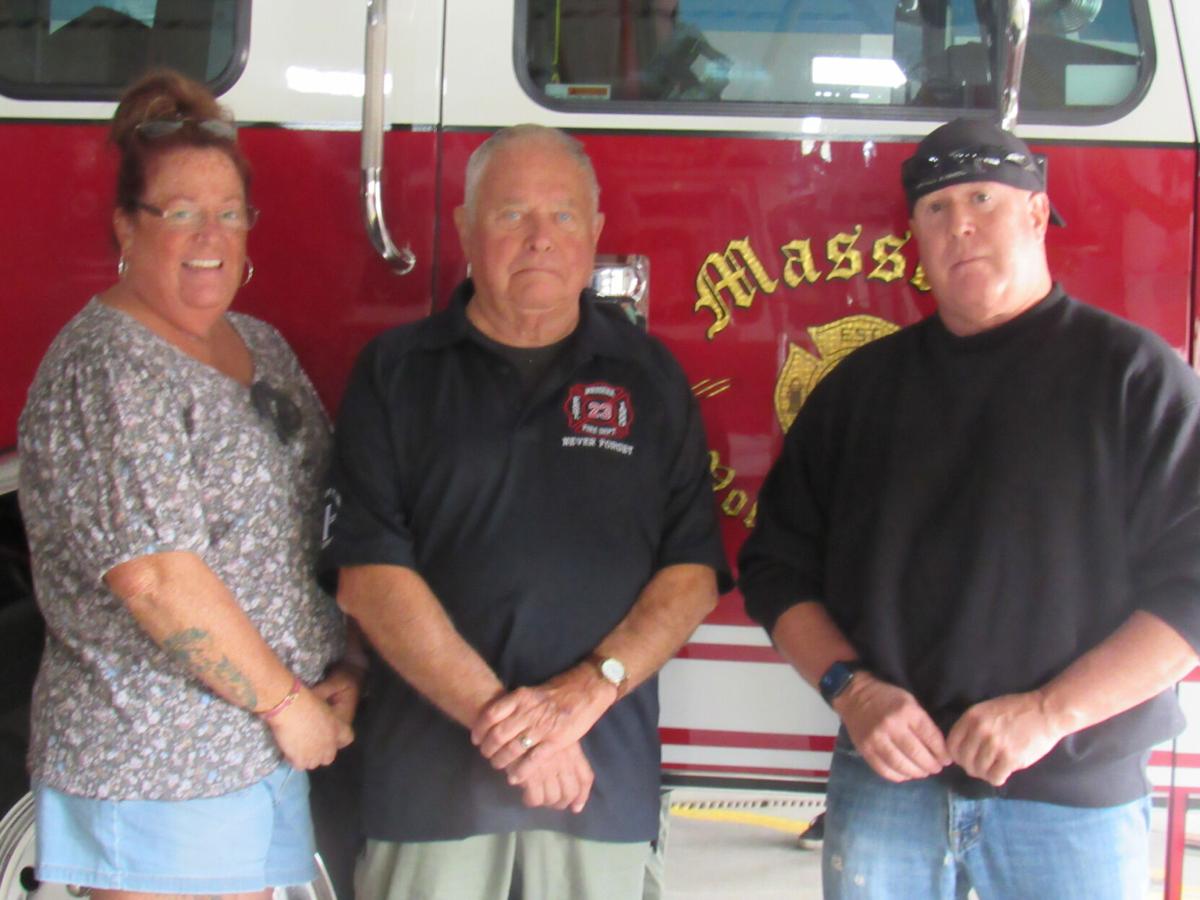 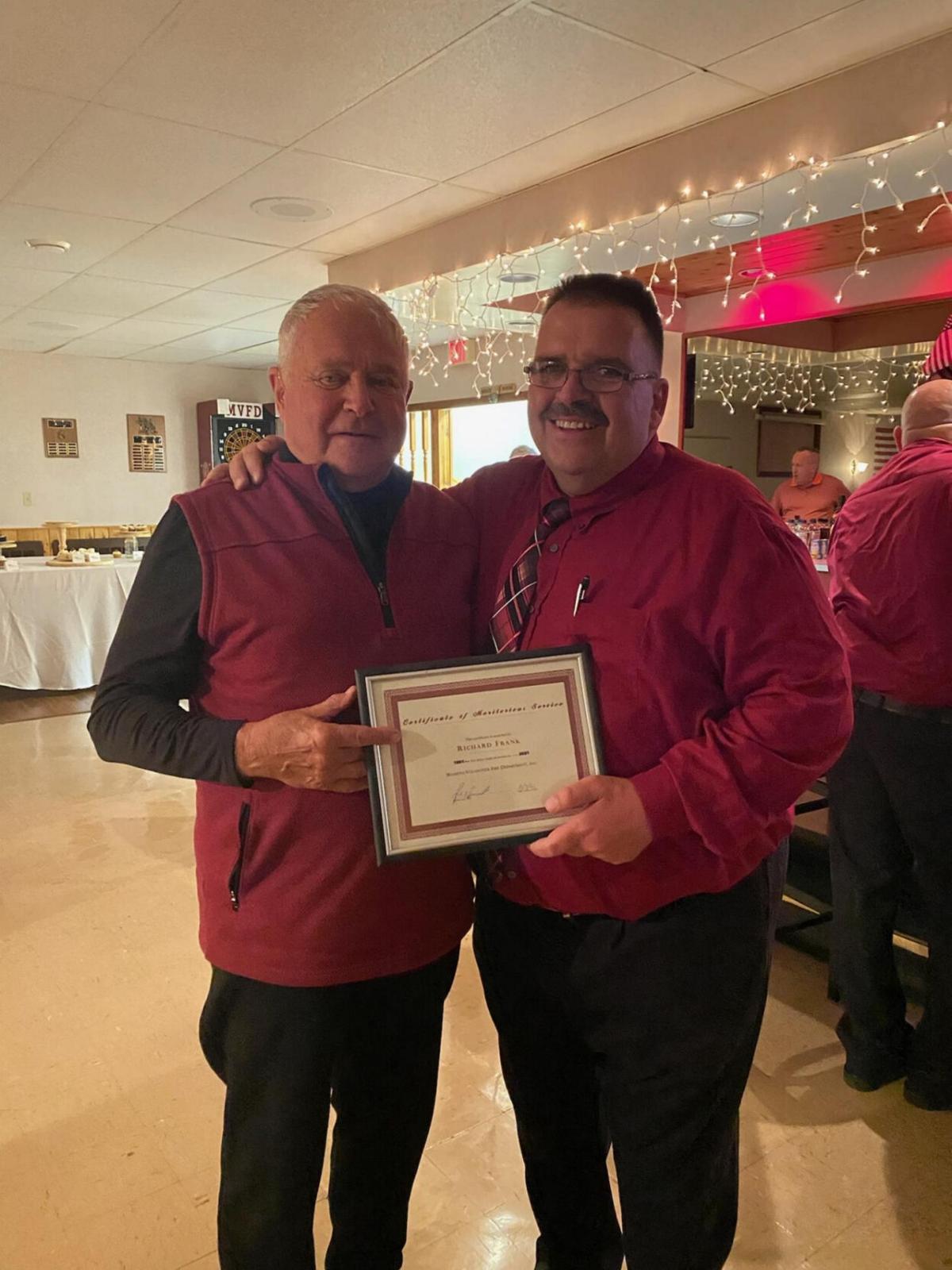 Richard “Dick” Frank shows that, even after 60 years in the Massena Volunteer Fire Department, he can still roll hose. Bob Beckstead/Watertown Daily Times

MASSENA — It was 60 years ago this month that Richard “Dick” Frank became a member of the Massena Volunteer Fire Department. And now, 60 years later, the 86-year-old is still responding to calls. Not all of them, but still, about 100 calls so far this year.

Mr. Frank was recognized for his service to the department during this year’s Fire Prevention Week banquet.

He said he didn’t apply to become a firefighter, but he ended up on the roster.

“I actually didn’t even put my application in here, My brother-in-law did, Howard Brouse. He was the chief,” Mr. Frank said.

The department’s charter required them to have 63 members, a requirement that still exists today, although all of them aren’t active.

“When I got in, you put your name in and you went to the bottom of the list and if somebody got out, the top guy got in. The list wasn’t long. But not a lot of guys got into the fire department. They stayed in there forever,” he said.

Mr. Frank still recalls the first fire he responded to a month after joining the department, when he and his family went to Canton to spend Thanksgiving with his aunt and uncle.

“I looked in the old fire station. They had nothing left in there,” he said.

That’s because the firefighters were out battling a blaze at the Hotel DeGrasse, a three-story wooden structure.

“When we came back in town, that place was burning. That’s my first fire, and I worked the fire with Dominic Zappia,” he said. “It was a great big old wooden hotel. You had to walk up big steps.”

He also remembers an all-nighter putting out a fire at an old theater on East Orvis Street on a winter night when it was 30 degrees below zero and all the hoses were frozen solid.

Mr. Frank has also fought fires at the former Springs Inn, and has been to blazes where people have died. One of them was the Rialto Theater, in which three people died in the downstairs section, he said.

“I’ve been to the Springs Inn three times when that burned,” he said.

So what’s kept him on for 60 years, serving under 31 chiefs?

“I enjoy being a volunteer fireman,” he said.

“Dedication,” Mr. Miller said, recalling what Mr. Frank had said during the weekend’s annual banquet. “He said it very well. He enjoys the camaraderie. He enjoys being around the young guys, seeing how the younger guys develop up through. He’s always told the young guys, ‘The day I stop rolling hose, when I can’t roll hose, I’ll get out. Until then, I’m going to be here.’”

These days, Mr. Frank is one of the volunteers responsible for directing traffic during fires.

“The firemen that are in it now, they’ve got a great big bag (of equipment) that I don’t know if I can even carry it,” Mr. Frank said.

It wasn’t always that way.

“The air pack we had when I got in looked like something you had in the first world war. It had a canister. Actually, it was more for show. We didn’t fight fires inside. We didn’t have the equipment,” he said.

When air packs came out, Mr. Frank said they were expensive.

“The village bought one and then put it in the Ford, which is the main pump. The drivers were all volunteer. When you pulled up, if he had to go in, he could grab that and he could go in,” he said.

Equipment was at a premium in Mr. Frank’s early days. It was located on the truck and only six pieces were available to those who got to the fire first.

Before moving to their current location, the firefighters were located in the former United Auto Workers hall next door, and the department owned three trucks.

“We had an old ladder truck stuck in the back corner over there. It had wooden wheels. They’ve got it in the museum somewhere,” Mr. Frank said.

Ladders weren’t like they are today either. They were all solid wood, and in three sections, and had to be put up manually.

“You couldn’t handle the ladders. They were all solid wood. We never practiced on them. We never used them. The truck sat there as an antique,” he said.

“Some of them are three sections,” Mr. Miller said.

Back then, pagers and radios weren’t part of the department’s inventory. Instead, a horn alerted them to fires.

“You had no idea of the street. You just had a general idea of where it was. If the wind was blowing, you couldn’t hear it. Then, the next thing they did, they came out with a box that had to be plugged in, but it was like a radio. But you’d have to be in the house to hear it. But they only had a few. If you were real active, you got one. They only had eight or nine of them,” Mr. Frank said.

Mr. Miller said Mr. Frank hasn’t just been instrumental in fighting fires. He’s also been a jack-of-all-trades around the station.

“Also notable about Mr. Frank is the amount of work that he’s done in the hall with the plumbing and electrical and all that over the years. Actually, we still rely on him,” he said.

Last year, for instance, there was an issue with the heating system, and it was Mr. Frank to the rescue.

“He had an impact in installing that, repairing that. Over the years he’s done all the plumbing and all the heating, as much as possible as he could,” Mr. Miller said.

Times have changed, but there’s been one constant over the past 60 years — Mr. Frank.