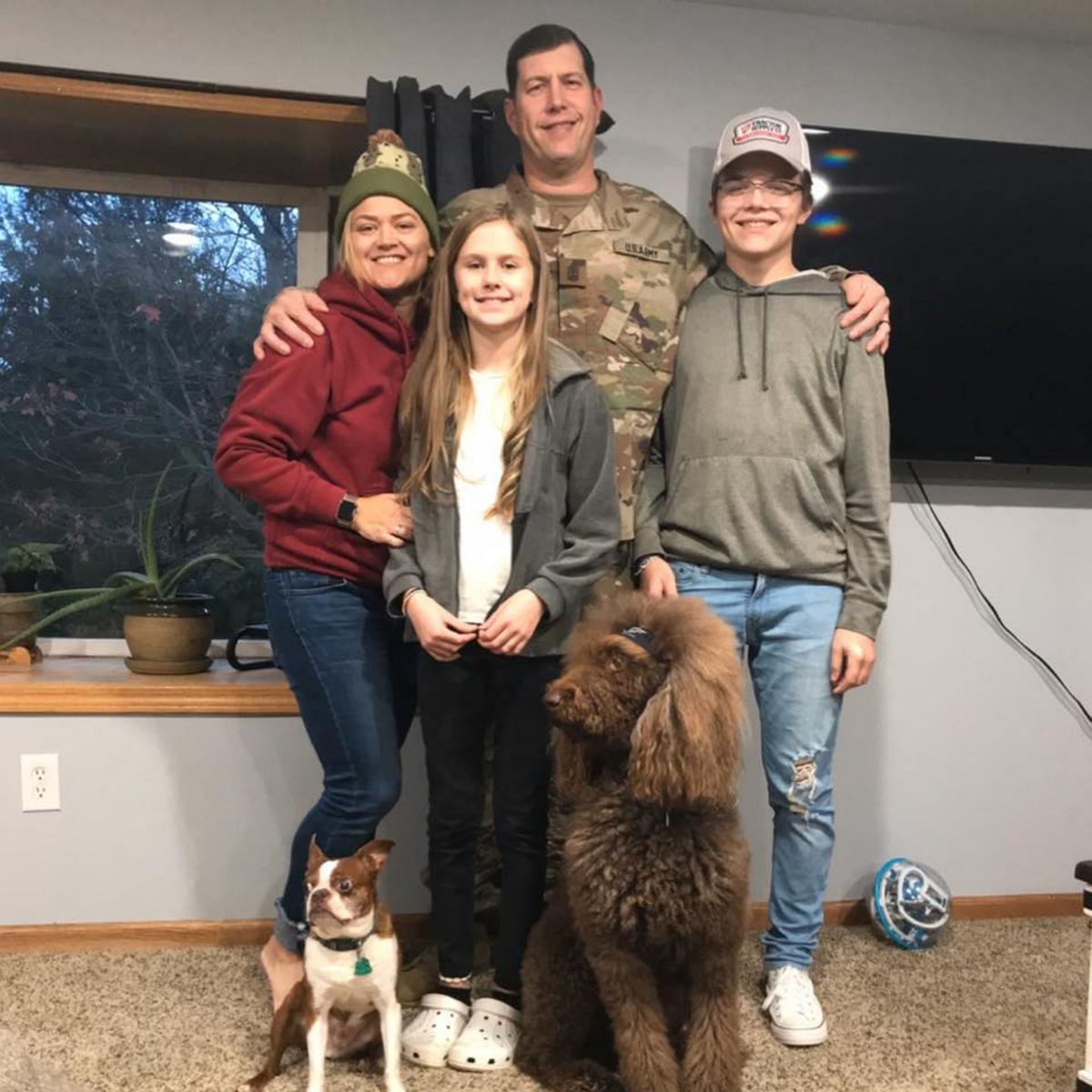 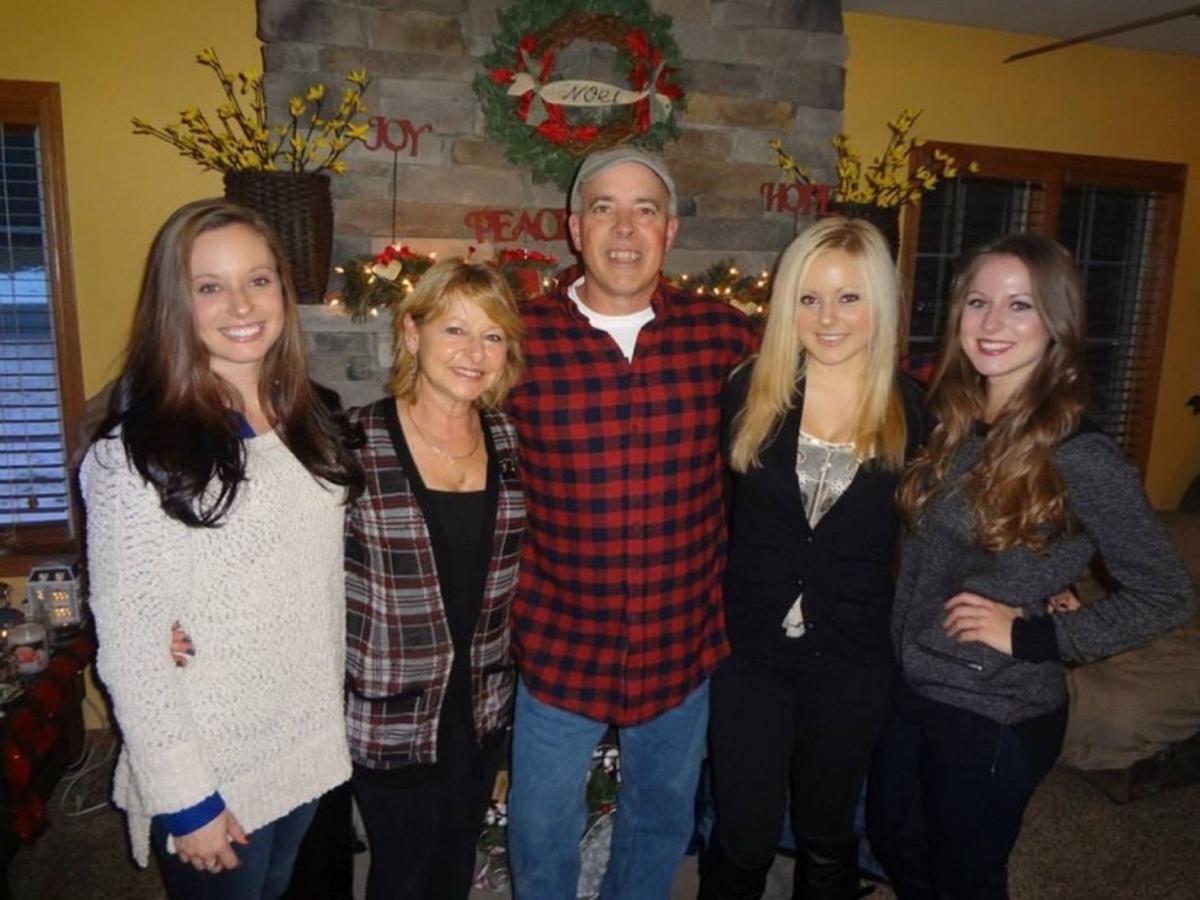 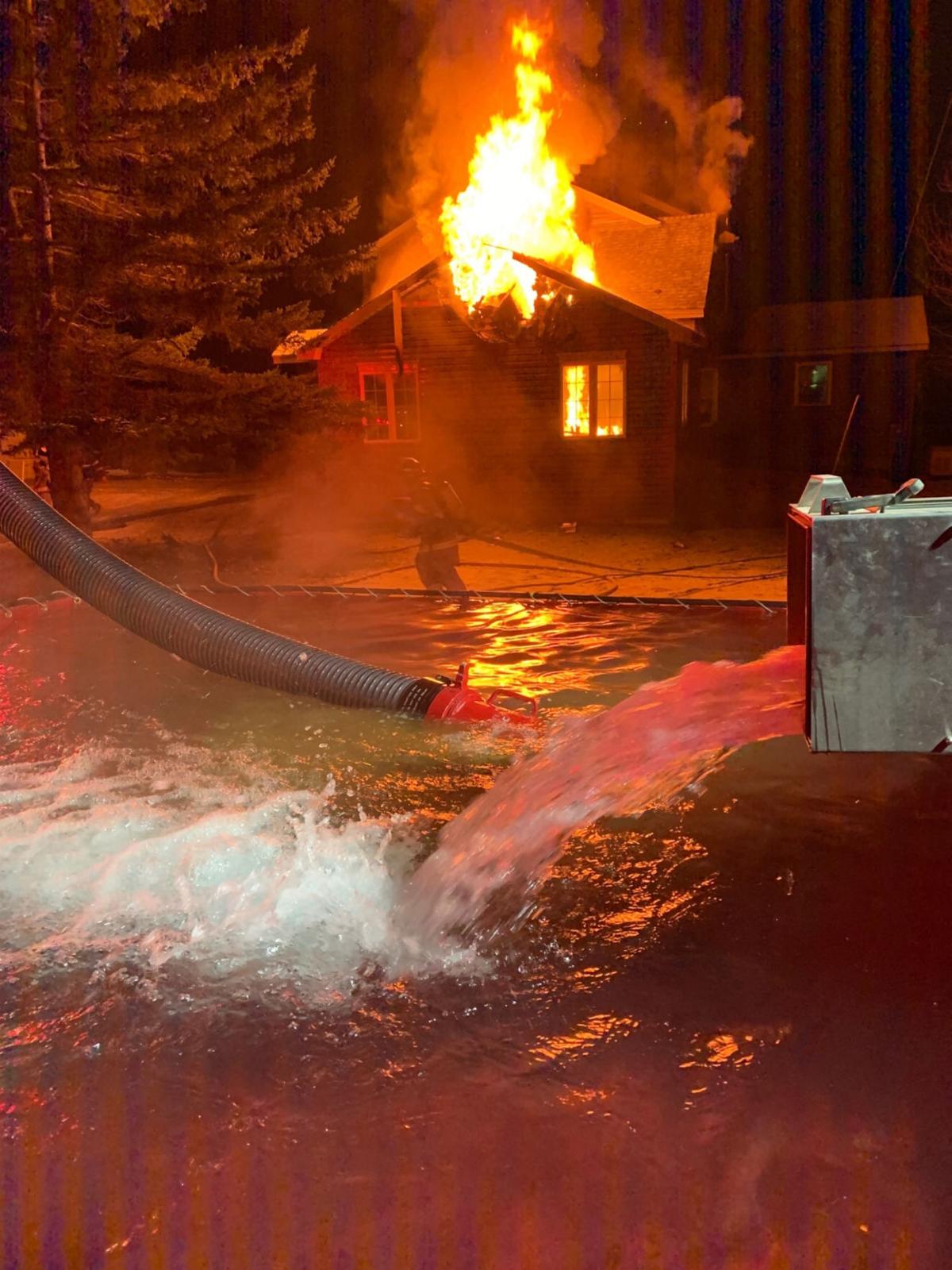 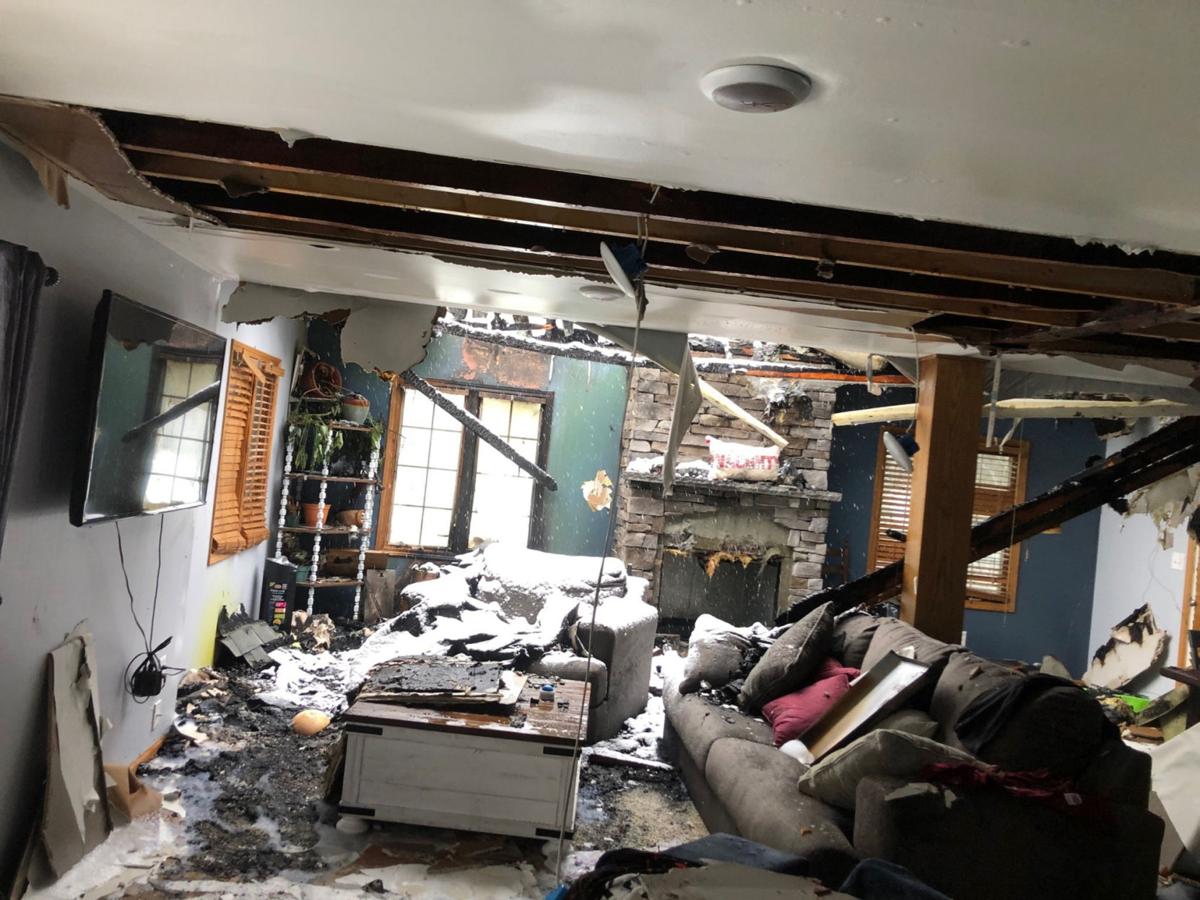 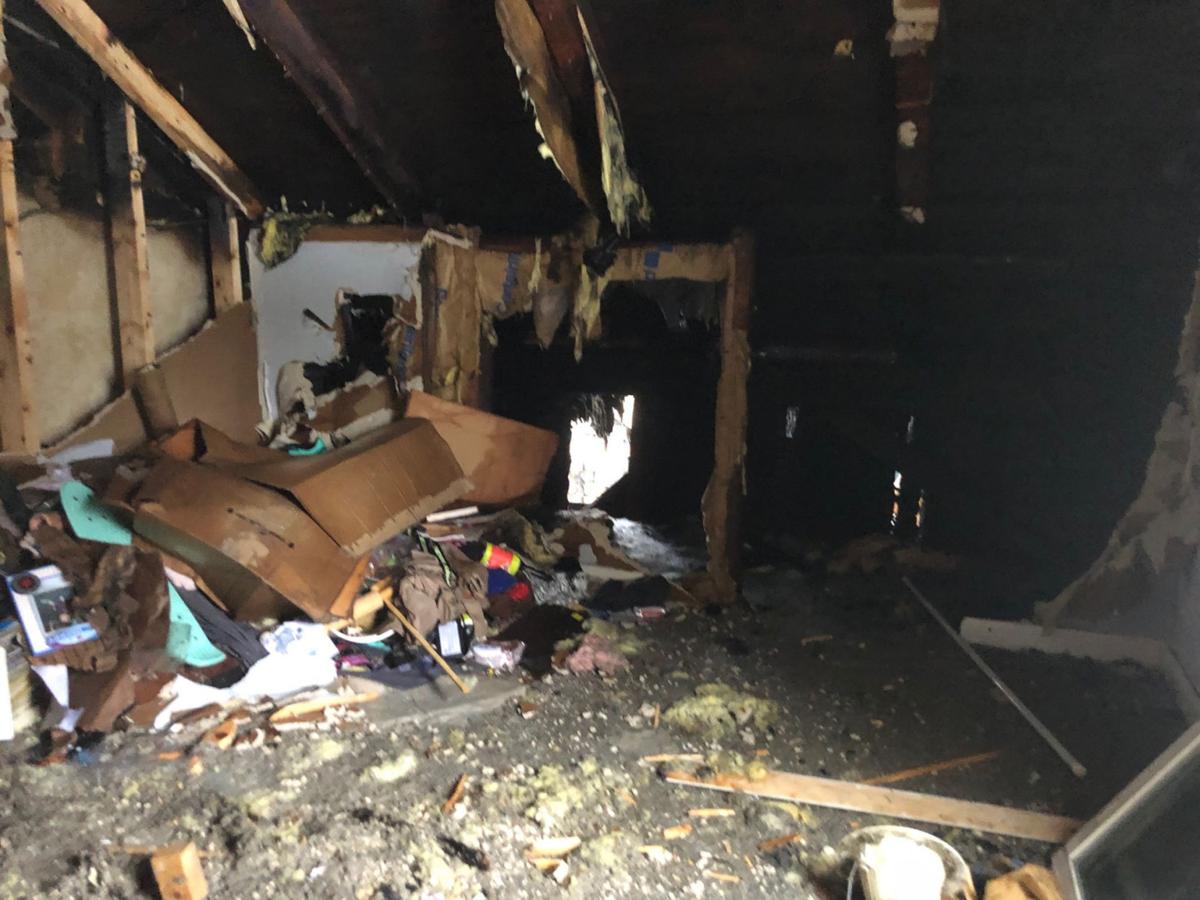 LOWVILLE — Shelena Endy and her family are new to the area, yet as she stood outside in the snow Tuesday morning, looking at her home beaten from a fire, she took a local tone. And Mrs. Endy’s new community followed her lead.

The morning of the fire, Mrs. Endy just wanted to thank the firefighters for doing everything they could to save her home. She was unaware a stranger — a woman who grew up in her house — was about to set aside condolences and rally a community to raise thousands for Mrs. Endy, her husband who’s deployed overseas and their two children.

Mrs. Endy, her husband, Todd, and their two children, Zeke, 16, and Elyzah, 12, moved to Lowville from Washington state about two months ago. Todd got stationed at Fort Drum and is deployed in Afghanistan. When they were moving into their new house on Number Four Road, Mrs. Endy hurt her back, requiring weekly visits to a chiropractor and yoga every morning before her kids wake up.

On the morning of Tuesday, Dec. 17, Mrs. Endy got up at around 5:30 a.m., went downstairs for coffee and looked outside. She saw the snow glowing.

“It looked like someone had hung up Christmas lights, and the snow was orange and yellow,” Mrs. Endy said. “I didn’t know there was a fire, but I knew I needed to get outside.”

She went outside and saw her roof ablaze, the flames reflecting off snow on the ground. She woke her kids up and got them outside, along with their two dogs. Her dad, who requires crutches to walk, lives with them as well. A passerby ran inside the house during the chaos and started helping Mrs. Endy’s dad get dressed and safely out of the house.

“It was more than just the firefighters. It was a team effort,” Mrs. Endy said. “Things could have been much worse.”

The Lowville Fire Department was the first on the scene, with the New Bremen department following shortly behind. They discovered heavy fire coming from the second floor at the front of the house. Off the bat, an interior team was sent up the stairs to work the flames. It took roughly 30 minutes to knock it down, and around 60 percent of the house was saved. Lowville Fire Chief Joe Austin was proud of his department’s steadfast response, though empathetic for a family displaced just ahead of Christmas.

It appears the fire started in the chimney, worked its way to the second-floor room and punctured the roof. When crews sprayed from the top down, water collected in the basement nearly five feet deep. The living room, dining room and home office were directly below the fire, where there was a Christmas tree, handmade stockings and cherished items passed down by generations.

“All the good, sentimental, pretty Christmas things were right in the middle of the fire,” Mrs. Endy said. “And in the wake of the water damage. So, yeah, it’s just stuff. I guess we’re just going to go with it’s just stuff.”

Mrs. Endy and her kids are staying in a local hotel as their home is unlivable. Her children are doing great and processing the experience with strength, Mrs. Endy said.

“They are resilient children,” Ms. Endy said. “The kids at school all wrote letters and gave them cards. They’re feeling the love as well.”

Ms. Endy’s husband was granted emergency leave from Afghanistan and is on the way home to be with his family.

“When a soldier deploys, their biggest fear is ‘what if something happens to my family while I’m gone?’” Mrs. Endy said. “My husband swore to take care of me and our children, but he also swore to defend this country, so he had to trust that he was leaving us in good hands. And, this was a harsh tragedy, but the truth of the matter is that he did. He left us in good hands, and we’re very grateful.”

Her husband’s family was left in the good hands of the community of Lowville. From the person who ran in to his burning house to help, the people who used to live there raising thousands, the volunteer firefighters, the neighbors who brought food, the Lowville American Legion being there for Mrs. Endy, to people across the country making donations, Mrs. Endy is feeling overwhelmed and grateful.

“We’ve been treated like locals,” she said. “We’ve been embraced and taken care of.”

Kurt and Penny Dittl, both Air Force veterans, raised their three daughters in Mrs. Endy’s house for 15 years before selling it to her.

Mr. Dittl owns a construction company and made several additions and renovations when he lived there, nearly tripling it in size.

“It was our family home,” he said. “We have a lot of memories there.”

Mr. Dittl went to see his old house after the fire to help with anything Mrs. Endy needed. He drained the plumbing lines so they wouldn’t freeze. He heard stories about neighbors bringing food to first responders the morning of the fire. He donated $250.

“It’s Christmas and they lost so much,” Mr. Dittl said. “They’re wonderful people, and we just want to do anything we can to help.”

His daughter, Shauna Dittl, graduated from Lowville High School in 2008 and now lives in San Diego working at a hospital and as a personal trainer. When she heard about the fire, she said she tried imagining it was her family going through it. The living room where her family gathered around the tree each year was destroyed. She said she couldn’t imagine being in Mrs. Endy’s situation — new to Lowville, known locally by few, her husband deployed, caring for two children and dealing with the aftermath of a chunk of her house burning to the ground.

“I could call and give my condolences, but I thought what can I do to help?” Ms. Dittl said. “In my heart I knew a small town could come together.”

About two hours after the fire, Ms. Dittl set up a GoFundMe page for the Endy family. If she was new to an area and experienced something like this, she would hope someone with connections would help her, she said. She reached out to the president of a college on the East Coast, her clients on the West Coast — most of them are service men and women — and all her high school friends in Lowville. She didn’t know if it would work, but a GoFundMe page raised more than $13,000 in two days. The goal was $5,000. It was at $19,820 as of Saturday afternoon.

It’s not slowing down — the Lowville community rallied to help people they hardly know, but also people in Texas, Utah and California have reached out asking to donate. Ms. Dittl doesn’t recognize many of the names of the people who have donated, indicating donations have generated from all over the country. The page has blown up to the point Ms. Dittl doesn’t plan to take it down anytime soon. She reached out to Mrs. Endy as well, asking her what she needs. They both agreed a portion of the proceeds will go to the responding fire departments as well, Lowville and New Bremen.

“I just tried to walk in her shoes,” Ms. Dittl said. “It’s terrible that a fire happened this time of year, but everyone was safe. There’s initial shock, but then you’ve got to figure out a way to live going forward.”

Mrs. Endy said she’s thankful to the community for stepping up to a help a new family. And donating to the fire departments is the least her family could do, she said.

“We plan on giving back to this community ten-fold,” Mrs. Endy said. “We have no idea what that looks like, but we were obviously meant to be here. It is a feel-good story.”