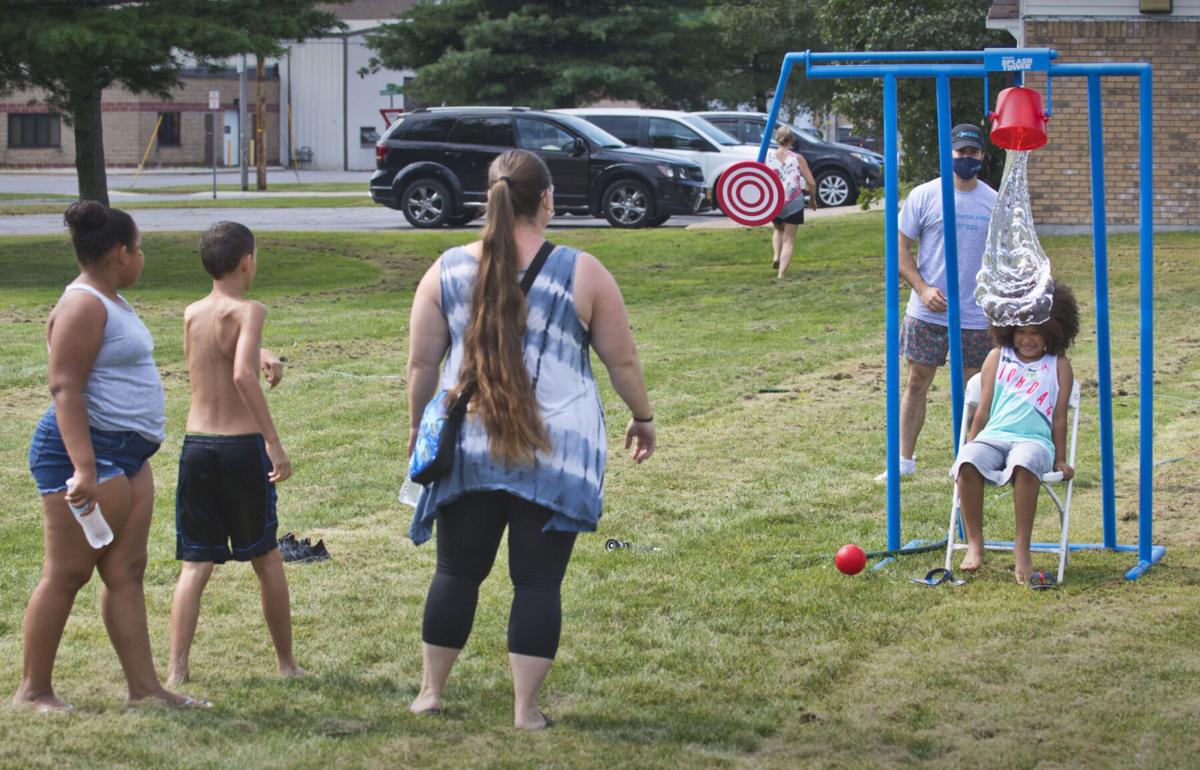 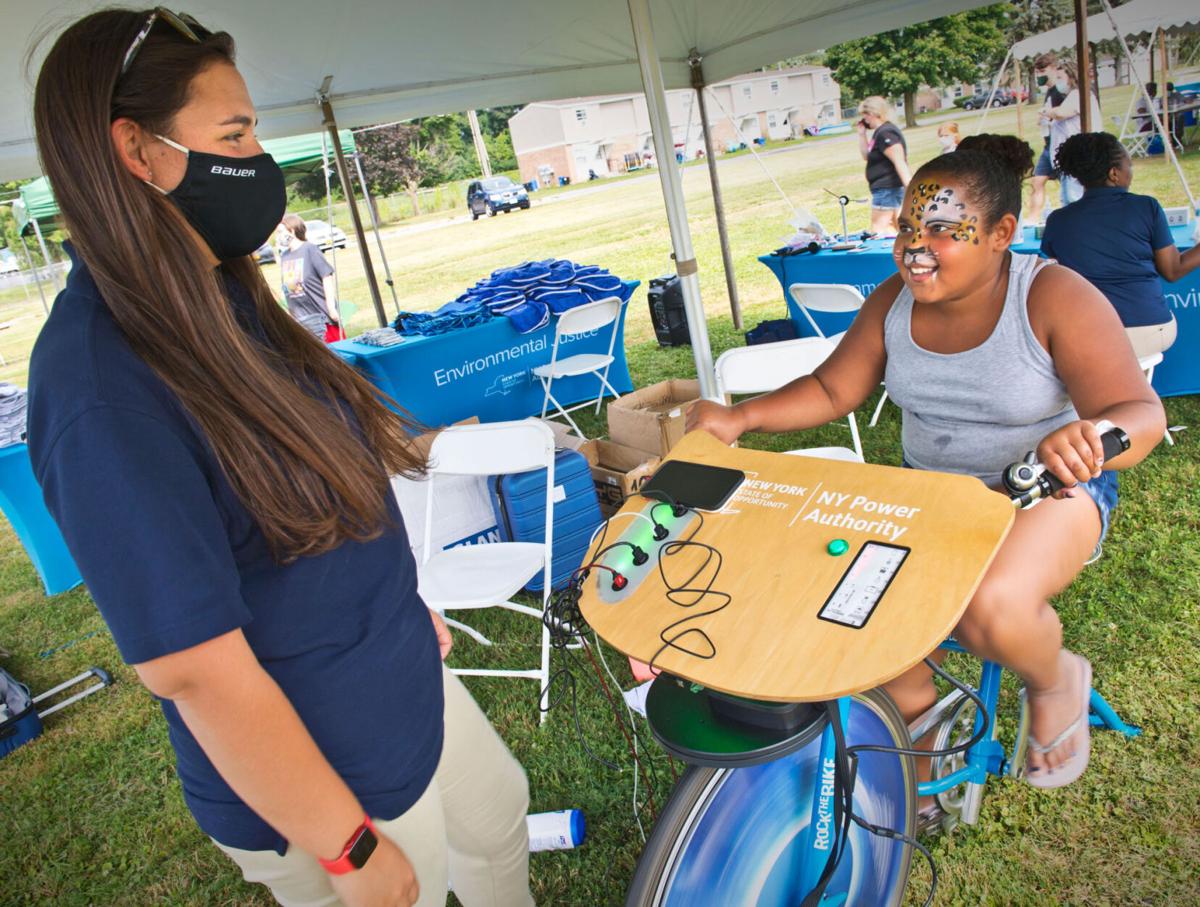 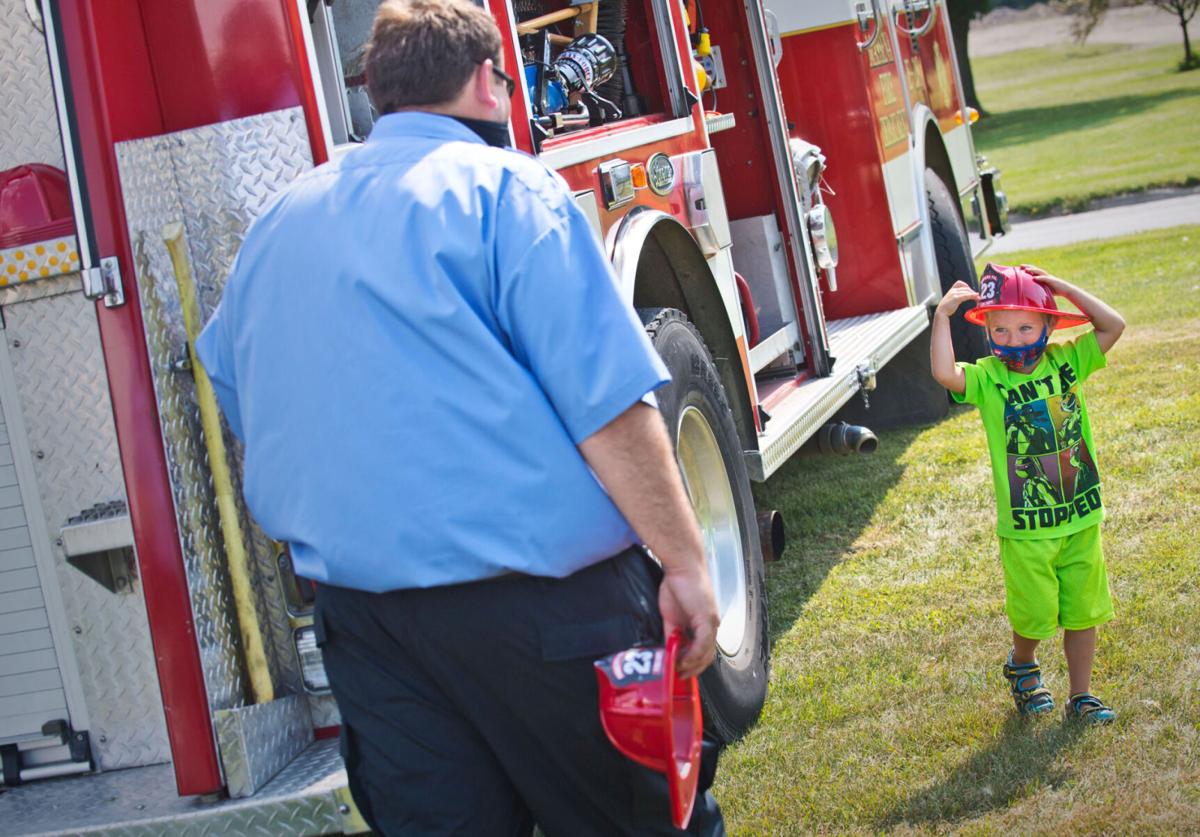 Malachi Murray tries on a plastic helmet given to him by Massena firefighter Corey Snyder during Massena Community Day. Christopher Lenney/Watertown Daily Times

Malachi Murray tries on a plastic helmet given to him by Massena firefighter Corey Snyder during Massena Community Day. Christopher Lenney/Watertown Daily Times

MASSENA — An open field at the Massena Housing Authority took on a new life Wednesday when the New York Power Authority brought back its Massena Community Day after a year in which the event was canceled because of COVID-19.

Those who took part enjoyed activities like face painting and balloons from Belly Buttons the Clown, a demonstration of different reptiles by Nicandri Nature Center Naturalist Joel Danko, various games like cornhole, a splash tower dunking chair located underneath a bucket of water that spilled down when a target was hit, a free catered meal, a visit by Massena Volunteer Fire Department members and STEM (Science, Technology, Engineering and Mathematics) activities.

Environmental Justice Department Director Kaela Mainsah said they travel around the state and work with the various communities, and she recalled the activities they had provided in Massena before COVID hit.

In 2019, it included a week of activities for young and old, such as a Community Education Day, a two-day STEM Camp for members of the former Boys and Girls Club of Massena at the Nicandri Nature Center, lunch and a movie for residents of the Massena Housing Authority’s complexes and a weatherization program for adults.

A few months earlier, they had provided Massena Housing Authority residents with 260 new energy-efficient refrigerators at no cost to them and, at the same time, NYPA officials handed out turkeys and platters of cookies to residents.

At one of the stations set up on Wednesday, Environmental Justice Department Project Manager Alex DeRosa was working with individuals on STEM projects. They included using construction paper and dowels to design their own wind turbine and test it to see how efficient it was.

In addition, there was a miniature solar panel.

“So, if you’re out in the sun, I could show you how that fits in,” she said. “They’re learning about renewable energy. We’ll talk to them and ask, ‘what do you know about power’ and see what they have to say.”

What they learned on Wednesday could help them in the future, Ms. DeRosa said.

“There’s so many jobs in renewable energy. There’s only going to be more,” she said.

There was no dunking booth, but there was a dunking chair where some youngsters sat in a chair, waiting for water to fall from a bucket placed above them once a target was hit — a perfect remedy for a day when temperatures climbed into the high 80s.

At another station, Joel Danko from the Nicandri Nature Center was discussing some of the reptiles he had brought, including a box turtle, Madagascar cockroach and mealworms.

“Insects have six legs like this cockroach or this honey bee or this grasshopper,” he said.

He welcomed visitors to touch the cockroach as he held it in his hand.

To round out the day, nobody went home hungry thanks to the variety of free foods served up. Families took their pick of offerings like hot dogs, hamburgers and salads and sat at one of the picnic tables located under a large tent, and watched as others enjoyed the activities around the field.