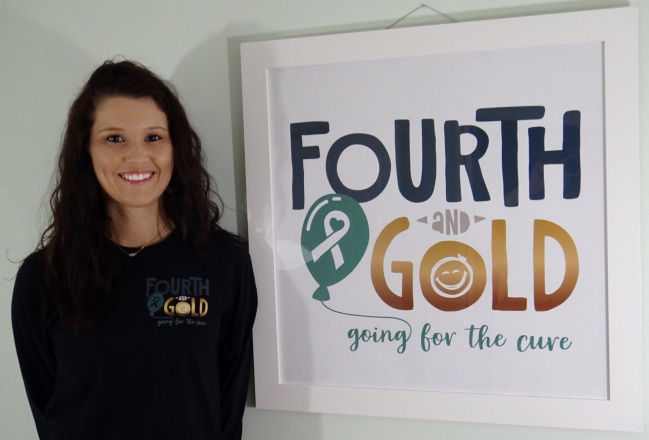 (PROVIDED BY ERIN TRACY) 2006 Pulaski graduate Erin Tracy poses next to a sign promoting her business “Fourth and Gold,” which aims to increase awareness of and research cures for childhood cancers. 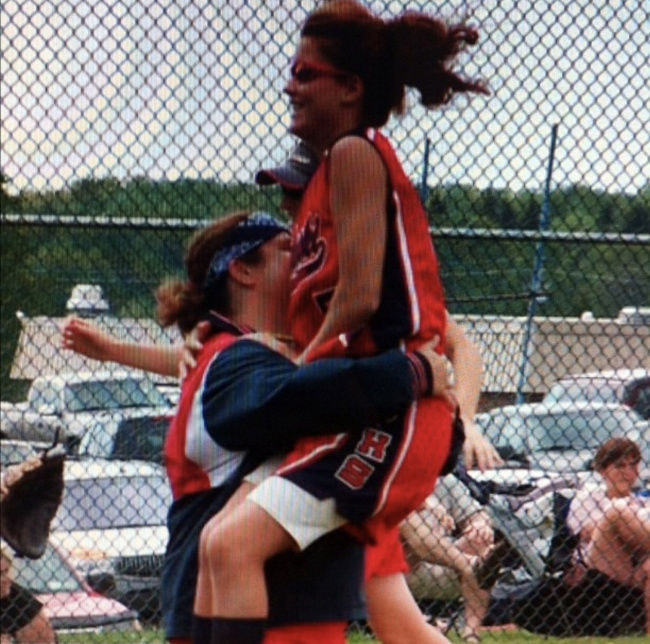 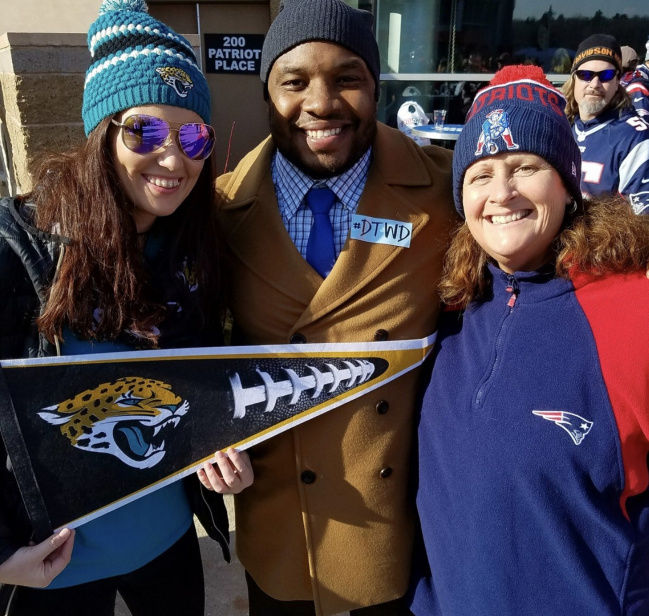 (PROVIDED BY ERIN TRACY) Erin Tracy, left, and Jill Truax pose with former running back and NFL Network analyst Maurice Jones-Drew prior to the 2017 AFC Championship game between the Jacksonville Jaguars and New England Patriots in Foxborough, Mass.

(PROVIDED BY ERIN TRACY) Pulaski students pose for a photo after conducting a skype interview with 2006 graduate Erin Tracy, where they learned about her business “Fourth and Gold,” which aims to increase awareness of and research cures for childhood cancers. 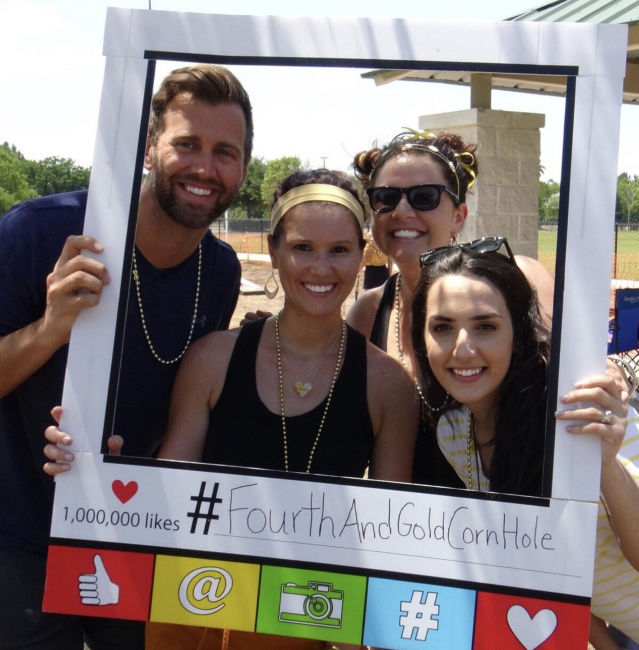 (PROVIDED BY ERIN TRACY) 2006 Pulaski graduate Erin Tracy, second from left, poses with other nurses during a cornhole tournament held to raise funds for her business “Fourth and Gold.”

(PROVIDED BY ERIN TRACY) 2006 Pulaski graduate Erin Tracy poses next to a sign promoting her business “Fourth and Gold,” which aims to increase awareness of and research cures for childhood cancers.

(PROVIDED BY ERIN TRACY) Erin Tracy, left, and Jill Truax pose with former running back and NFL Network analyst Maurice Jones-Drew prior to the 2017 AFC Championship game between the Jacksonville Jaguars and New England Patriots in Foxborough, Mass.

(PROVIDED BY ERIN TRACY) Pulaski students pose for a photo after conducting a skype interview with 2006 graduate Erin Tracy, where they learned about her business “Fourth and Gold,” which aims to increase awareness of and research cures for childhood cancers.

(PROVIDED BY ERIN TRACY) 2006 Pulaski graduate Erin Tracy, second from left, poses with other nurses during a cornhole tournament held to raise funds for her business “Fourth and Gold.”

Former Pulaski softball coach Jill Truax can vividly recall the moment that her team faced a five-run deficit in the fifth inning of the 2006 Section 3 Class C championship game, when senior second baseman Erin Tracy huddled her teammates and delivered a passionate speech that fueled a monumental extra-inning comeback victory.

Tracy — a 2006 Pulaski graduate and former Oswego State softball standout — now displays that same level of fervent dedication toward her new mission of changing the research world of childhood cancer.

Tracy works as a pediatric oncology nurse at Wolfson’s Children’s Hospital in Jacksonville, Fla., and is the sole owner and operator “Fourth and Gold,” a small business she founded with the intent to raise awareness and funds to improve pediatric cancer research.

Only four percent of federal government cancer research funding goes to study childhood cancer, according to the National Pediatric Cancer Foundation, which Tracy cited as among her top motivating factors for launching the business in March 2018.

Tracy’s business began with selling signature merchandise like T-shirts, hats and cups, and has grown to include fundraising events. She donates 50 percent of her merchandise revenue to not-for-profit organizations that conduct independent research on various forms of childhood cancer — St. Baldrick’s Foundation, Alex’s Lemonade Stand, Cure Childhood Cancer, Pediatric Brain Tumor Foundation, and Beat NB — and the rest of her profits go toward her events budget and other small donations.

Tracy’s website, fourthandgoldllc.com, features a section where visitors can request a T-shirt for any child suffering from cancer. Tracy sends a package that consists of a Fourth and Gold T-shirt, bracelet, and an uplifting message to each recipient.

Fourth and Gold donated nearly $4,000 to its non-profit partners between Jan. 1-May 31 this year, and recently hosted a cornhole tournament that raised $3,325 to donate to Alex’s Lemonade Stand. Since her official launch last March, Tracy has garnered 1,300 followers on social media, and some of the blogs on her website have reached 50,000 views.

“It means a lot to see where I started and where it has grown,” Tracy said. “There were months where I was only able to donate $10 to a foundation, whereas last month I was able to donate $3,000. So it’s been a struggle but has really been amazing and I’m super excited to see where it’s going.”

Tracy moved to Florida with her dad in 2010 upon graduating from Oswego State University, where she studied biology. She eventually attended nursing school and from there, decided to devote her energy to combating childhood cancer.

She accepted a job at the Mayo Clinic in Jacksonville about six years ago before achieving her goal of working in a pediatric cancer center just a few years later. It wasn’t until the summer of 2017, Tracy said, that she was inspired to enhance her efforts even further.

Tracy remembered laying by the pool when she received a call from a friend in Pulaski about a local two year-old girl named Charlie Peter that had been diagnosed with a form of leukemia. Tracy reached out to the girl’s mother and said that conversation became the starting point for her eventual business.

“Something inside me that day just sparked to know that I wanted to do more than be a nurse of oncology, I wanted to raise awareness and raise funds, and just really bring more light to it,” Tracy said. “I wanted to be someone who is a voice for these kids that is not directly impacted. I don’t have a child or a niece or a nephew or a cousin who has childhood cancer, but I quickly realized that this community needs more voices than people who are directly impacted. It needs a village.”

Tracy is an avid Jacksonville Jaguars fan that has attended games regularly since she moved to the area in 2010. Her love for the team and the sport helped her develop the Fourth and Gold name, and could potentially lead to larger opportunities.

Tracy based the business title off of the “fourth-and-goal,” scenario in football, which requires a bold decision and is always among the most critical plays in a particular game when it occurs. She also wanted to use the number four to highlight the small percentage of federal childhood cancer research funds provided, and gold because it is the color that corresponds with pediatric cancer awareness month in September.

“Our slogan is ‘Going for the cure,’” Tracy said. “So our name represents that we’re always going for it, and constantly doing what we can do try to go for that cure.”

The next large venture for Fourth and Gold is slated to come at the Jaguars’ season opener at 1 p.m. on Sunday, Sept., 8, at TIAA Bank Field in Jacksonville.

Tracy has received franchise approval to hand out gold ribbons at the entrance gates to raise awareness for pediatric cancer, which coincides with its designated month of September. She plans to create 36,000 ribbons with the aim of reaching about half of the fans in attendance, while delivering a quick message to each about her mission.

The Pulaski Middle School student government, which is advised by Jill Truax, opted to donate about 10 percent of its class funds raised throughout the year toward purchasing the gold ribbon materials. That decision was unanimously voted upon after the group of students recently discussed the mission of Fourth and Gold with Tracy via teleconference.

“I think it was cool that they saw the connection, someone from Pulaski who had branched out and was doing something that was going to make a difference, and so that’s what they decided to put that money toward, helping her make the ribbons,” said Truax, who has worked as a teacher and coach in the district since 1992 and has maintained contact with Tracy.

“I’m so proud of Erin because when she was growing up in Pulaski, it’s such a small town and I think sometimes kids doubt that they can come from a small town and go out in the world and make a big difference,” Truax added. “She is proof positive to our kids in this generation that it’s something that can definitely be done.”

Tracy attended a recent fundraiser hosted by Jaguars executive and former NFL coach, Tom Coughlin, and has written a letter to Jacksonville kicker Josh Lambo after a brief meeting at the event. She hopes to involve the Jaguars in more future business events and said she plans to pitch the idea of asking head coach Doug Marrone, who used to guide the Buffalo Bills and Syracuse University football teams, to shave his head in support of pediatric cancer awareness.

“I think it’s really awesome the way that she has combined her two passions, her love for sports and obviously her involvement as a season-ticket holder for the Jacksonville Jaguars, and then her passion to help kids with cancer,” Truax said.

“She has that mentality that when she sets a goal, she isn’t going to let anything stand in her way and she’s going to make sure that it happens,” she added.

Tracy said that the dream objective of Fourth and Gold is to eventually grant a million-dollar donation to one of its independent non-profit partners. The business has received strong support from Tracy’s Oswego County followers and also around the Jacksonville community, and Tracy has charted signs of progress like a nearby flag football team sporting gold socks to help promote her message.

Tracy also played basketball and girls tennis while at Pulaski, and participated in student government and the CiTi Boces New Visions program. She was a key member of the 2006 Blue Devils varsity softball team that captured the program’s first sectional championship by beating perennial power and longtime nemesis Sandy Creek in extra innings, a triumph that came after a thrilling rally from a 5-0 fifth-inning deficit.

More information regarding Tracy’s business and ways to get involved can be found at the website fourthandgoldllc.com. Fourth and Gold is also on Facebook and other social media platforms.