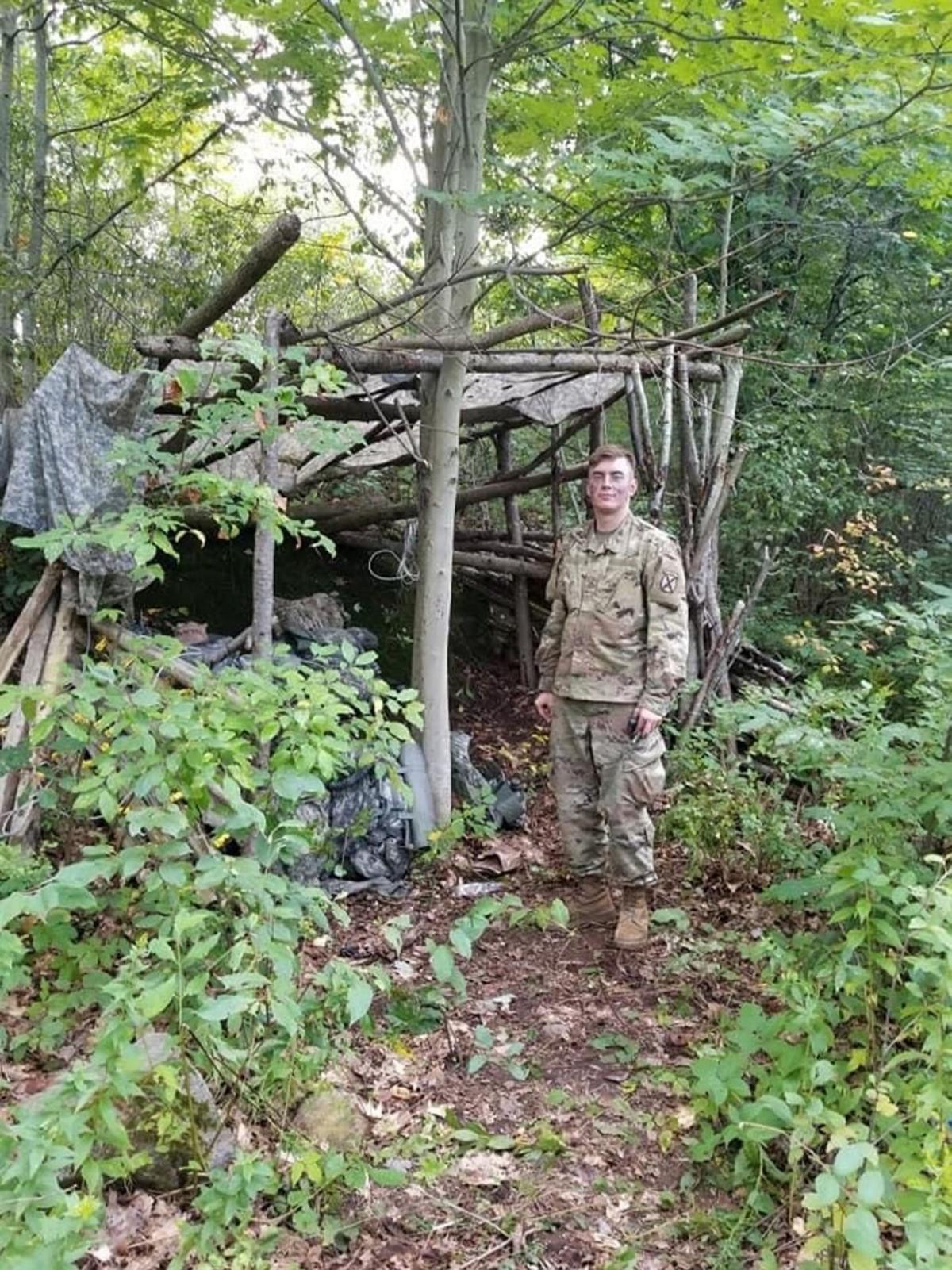 Soldier Michael Conner, who paid for the checked bag of a stranger Monday morning at the Watertown International Airport. Provided photo 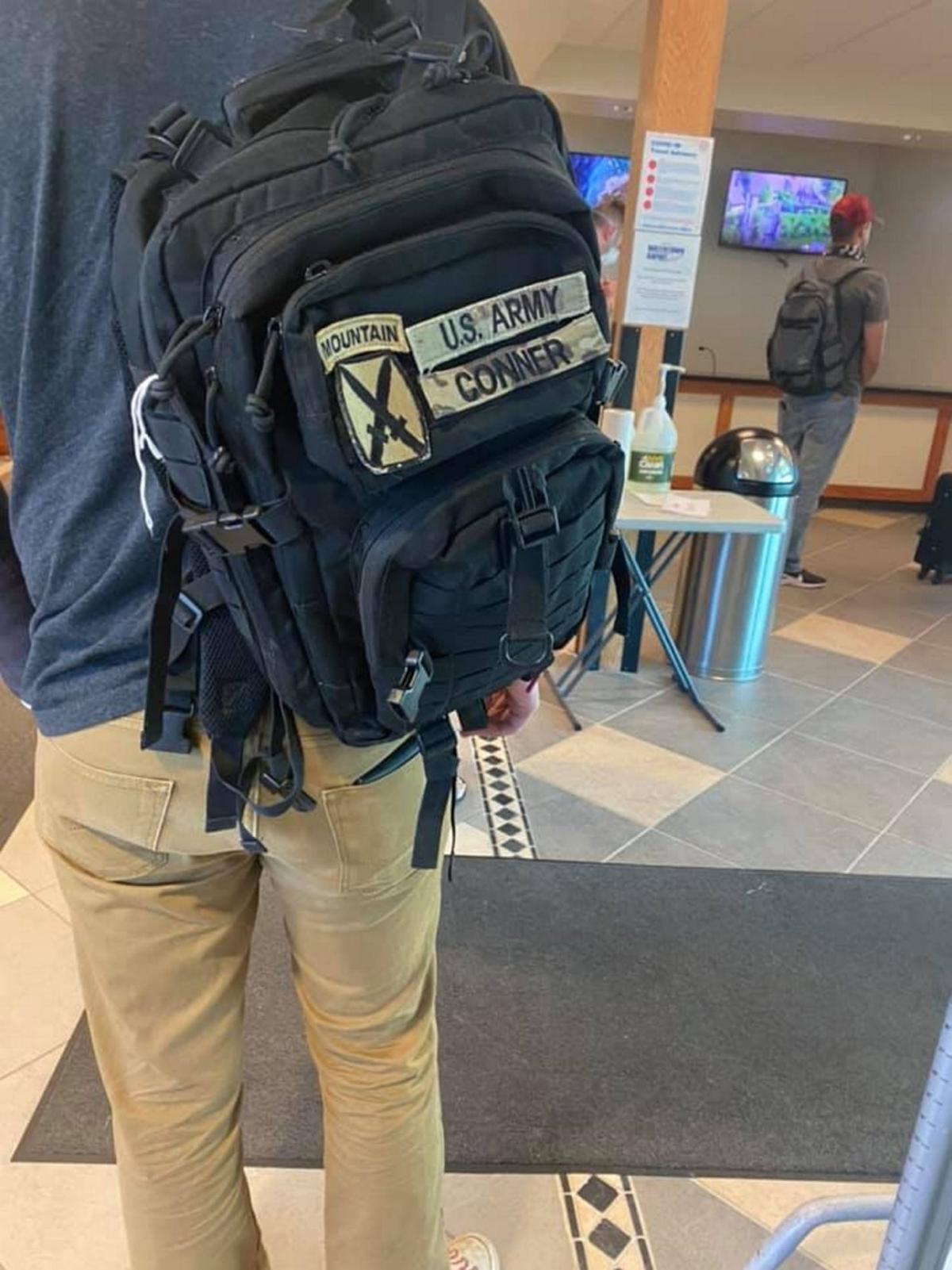 The photo of Michael Conner’s backpack at the Watertown International Airport that quickly went viral on Facebook after his random act of generosity toward a stranger Monday morning. Provided photo

Soldier Michael Conner, who paid for the checked bag of a stranger Monday morning at the Watertown International Airport. Provided photo

The photo of Michael Conner’s backpack at the Watertown International Airport that quickly went viral on Facebook after his random act of generosity toward a stranger Monday morning. Provided photo

WATERTOWN — Though he always knows he will have enough time to make his flights at the Watertown International Airport, Greg McLean decided to head in about an hour early for his 8:05 a.m. departure to Philadelphia, Pa. on Monday.

As he walked through the doors, he noticed a young girl in distress at the counter as he joined the line to check his bag. Upset and crying, she was speaking with her father, who was also visibly upset, over FaceTime. All alone, her dad was trying to bring her back to California for a heartbreaking family matter — her grandfather was dying and he wasn’t even sure if he would still be alive by the time she made it there.

Attempting to check her bag, the customer service agent was unable to do so without a credit card, which the girl did not have. On the phone with her father, they tried to use his card, but due to airline policy, a physical cardholder needed to be present. It was at this point that an individual in the security line stepped up to help out.

Walking up to the counter and saying, “Don’t be upset, I got it,” the man, without introducing himself to anyone, pulled out his bank card and paid for the girl’s bag. Both the girl and her father were grateful and asking what they could do to repay him, but he simply said, “don’t worry about it.”

After his good deed was done, he stepped back into the security line and went about his business. “It was awesome, you don’t see many people doing that these days, it was something heartfelt to watch,” Mr. McLean said.

Mr. McLean, born and raised in Watertown, had been visiting family for the Fourth of July weekend and his sister’s 21st birthday. Heading back to Indiana for flight school, where he is training to become a commercial airline pilot, he, along with most of the airport, witnessed the entire scenario and decided to document the individual’s actions with a photo of his backpack, which had a few patches on it, one bearing his last name: Conner.

Aside from the last name and the fact that he was affiliated with the 10th Mountain Division, Mr. McLean did not know who this good Samaritan was, so on Tuesday he took to Facebook with the photo and a post about what had transpired Monday morning, hoping to find the soldier responsible.

“He did an amazing and heartfelt thing. He needs to know that and his Command staff need to know that,” Mr. McLean said in the post. “The only information I know is that his last name is CONNER, he has a cast on his left arm, he was going on leave to be with his family, and he likes to skateboard.”

Michael, 20, is a signal leader with the Army, and has been serving for just over two years.

“Honestly, I was waiting because I was hoping that they were going to get the situation resolved themselves,” he said of the minutes before he stepped in. “Once they said that he had to be there in person and they said that she couldn’t leave her bag there, that’s when I got out of line and went up there. I just wanted to make her day easier. She was very stressed out and it’s kind of like what the Army teaches you, service, and what I would want in that situation if I was in it.”

Reaching far and wide, the post caught the attention of Sen. Patricia Ritchie, who shared it to her own Facebook page along with the following message: “I’ve had a number of people share this heartwarming story with me and wanted share it here on my wall so more people can read about the goodness that exists in our world! I hope you’ll join me in thanking this soldier not only for his service to our nation, but also for his generosity in helping a young girl through what must have been a very stressful experience.”

As of 4 p.m. Thursday, Mr. McLean’s post had 1,900 likes and heart reactions, 394 comments and had been shared over 3,000 times. According to Mr. McLean, he has received many messages regarding the post, some from people in other countries.

Mr. McLean, who has spoken with both Michael and his father since the post went viral, said Michael clearly had a good upbringing and didn’t really think too much about what he was doing, acting on goodwill and instinct. He also mentioned that in typical soldier fashion, Michael is very humble and doesn’t really care about the attention, he’s more interested in the message being delivered to the community.

“With the attention I’m mostly overwhelmed, but I’m happy that I was able to provide a positive story amongst what’s going on right now, it shows people that there’s still some good in this world,” Michael said. “I think it’s a reflection of the leadership I’m under in the Army, they’ve shown me a lot of compassion and I think that reflected on that situation pretty well.”

Michael shared that his family is extremely proud of his act of compassion and that before the post went viral, he returned home and told his family the story and how sad the situation was. The next day, he found out that the post detailing his kindness had gone viral.

In a message to Mr. McLean, Michael’s dad mentioned that moment as well: “He told us about what happened at the airport as if it were just a normal, everyday thing,” he said. “It never occurred to us that it would go viral like it did, I couldn’t be more proud of him.”

He went on to tell Mr. McLean that while his son is a humble young man, he seemed to be handling the attention well and the family was thrilled he was receiving some recognition.

“Especially with everything happening, COVID, politics, it’s important to remember that doing something like this, a small gesture for someone, it can make a huge impact and bring joy to a lot of people,” Mr. McLean said of Michael’s actions. “I think it’s amazing that during hard times, we as human beings can step up and help somebody in need.”

Amid all the attention he has received from family, strangers, and his Command on Fort Drum, Michael’s main goal on Monday was simple: help someone in need, though he may never know the name of the girl he helped or how everything turned out for her after his random act of kindness.

“Hopefully, the girl got to see her grandfather, that’s all that mattered to me in the moment,” he said.

Thank you for your act of kindness, Mr. Conner.

Mr. Conner is such a kind and thoughtful young man. His parents can be very proud of him. Thank you Mr. Conner for helping this young lady who was in great distress and need.