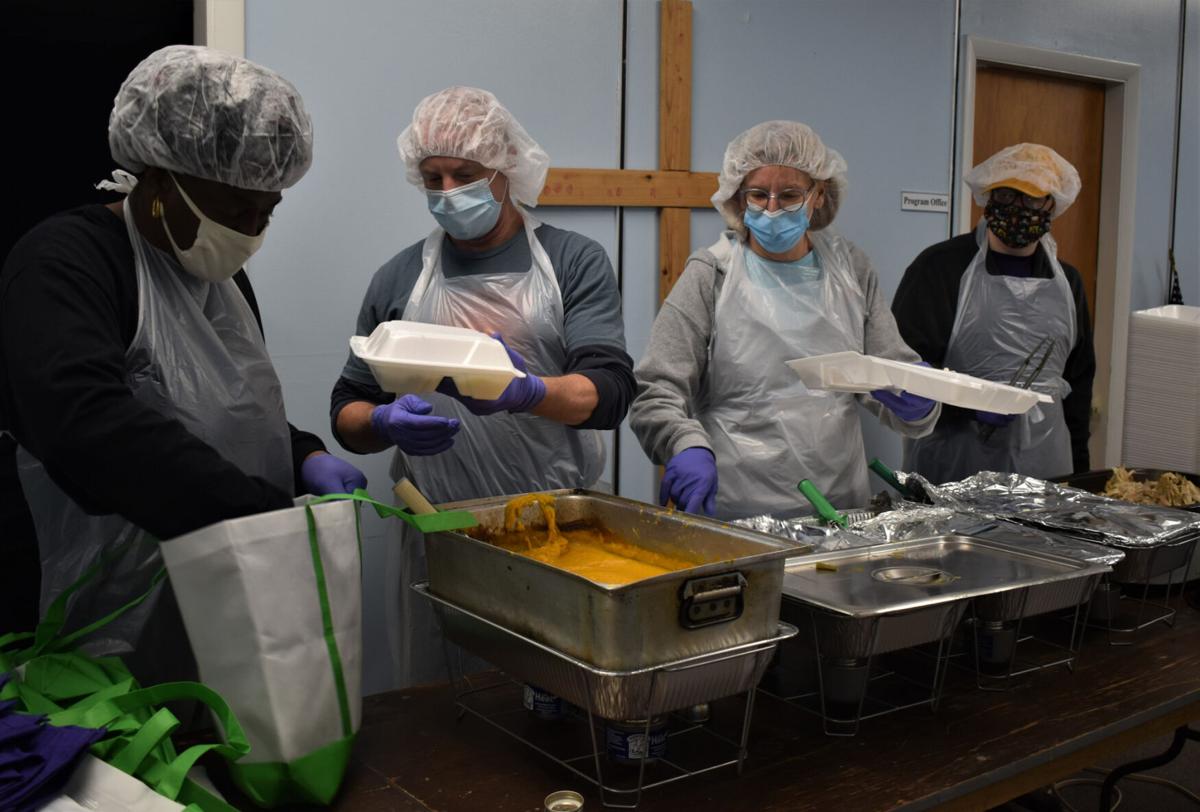 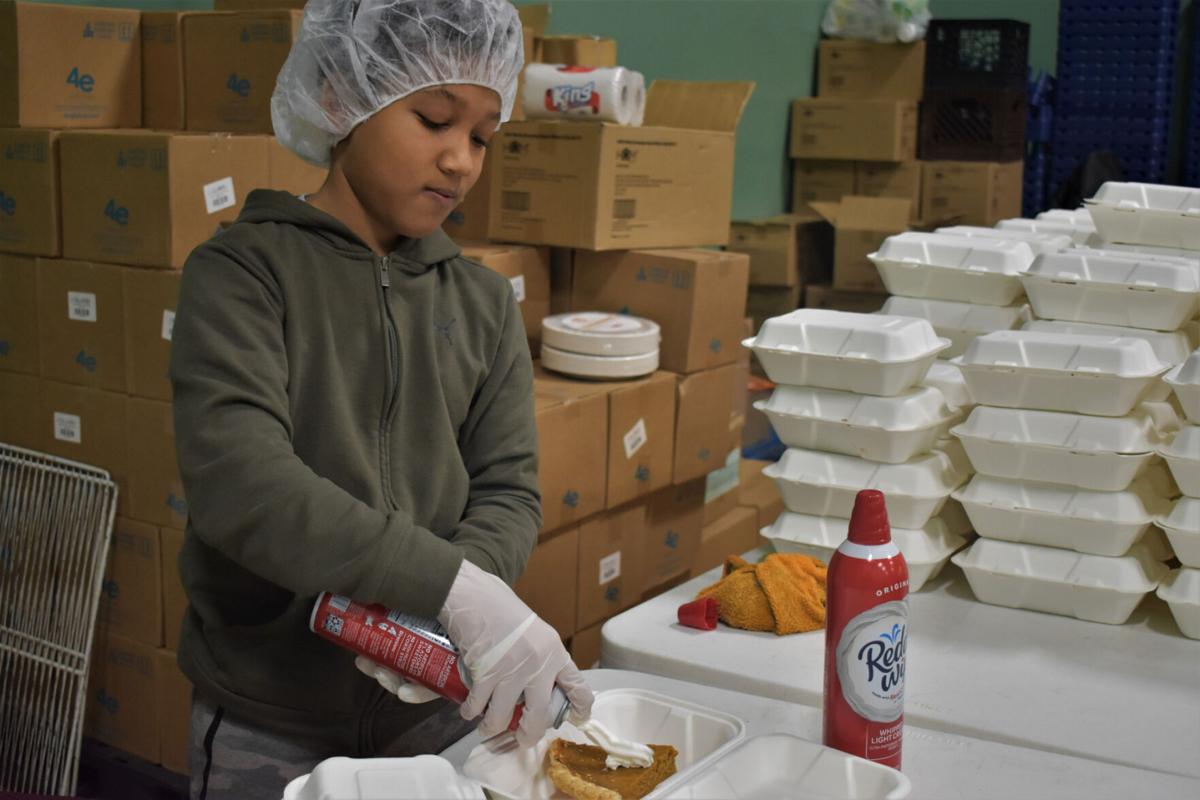 Manning the pie station and adding the finishing touch — whipped cream — to slices Thursday morning, 11-year-old Nadji Booker has been helping out at the Watertown Salvation Army since he was 5 years old. Rachel Burt/Watertown Daily Times 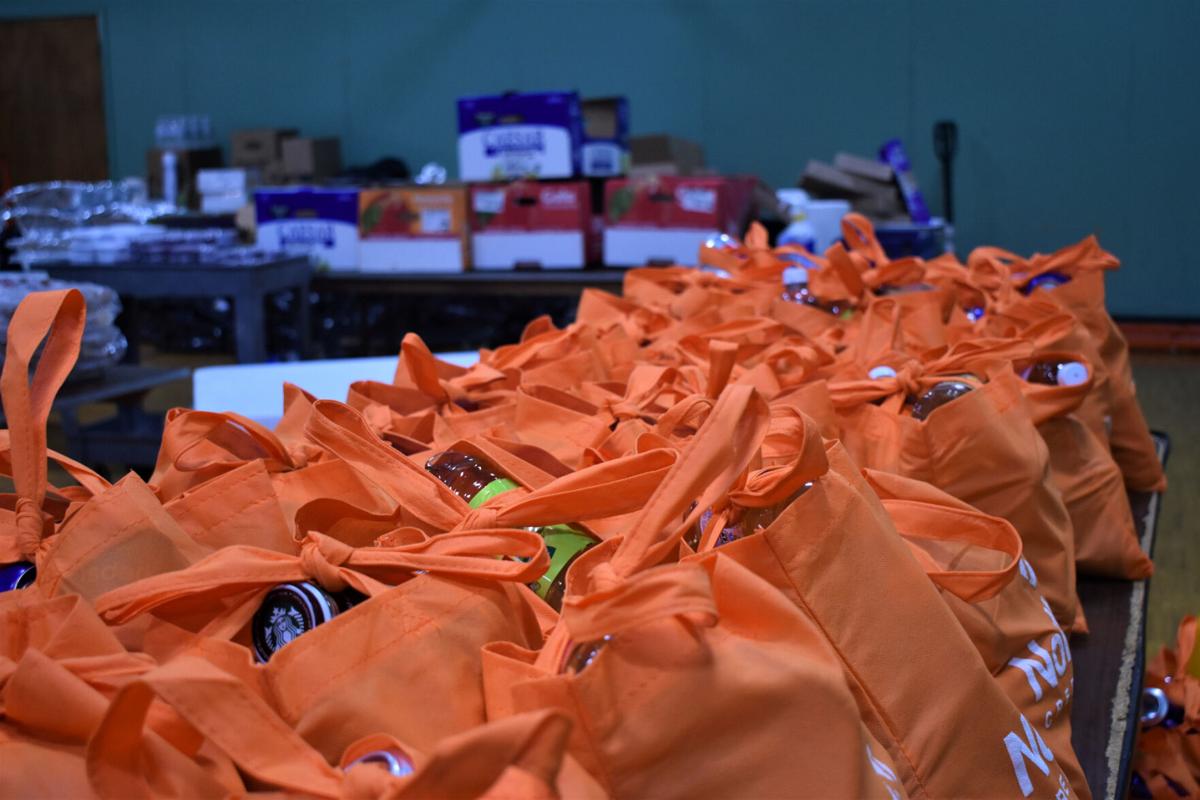 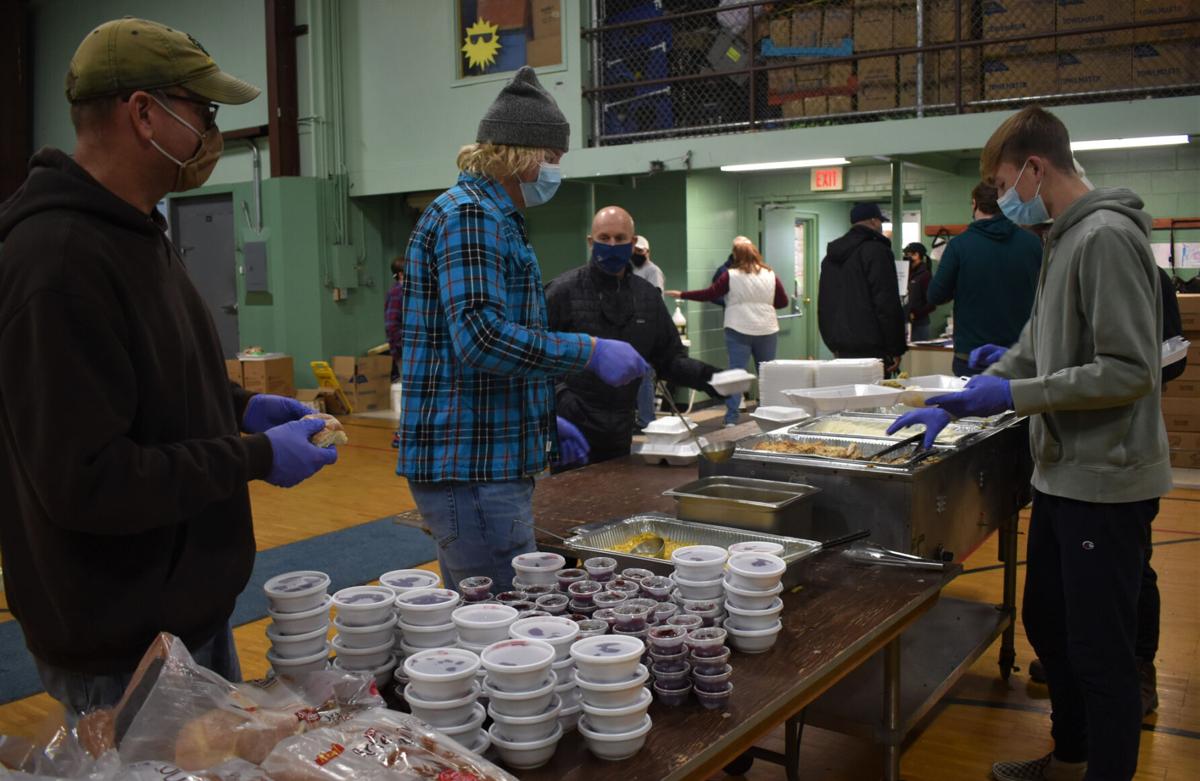 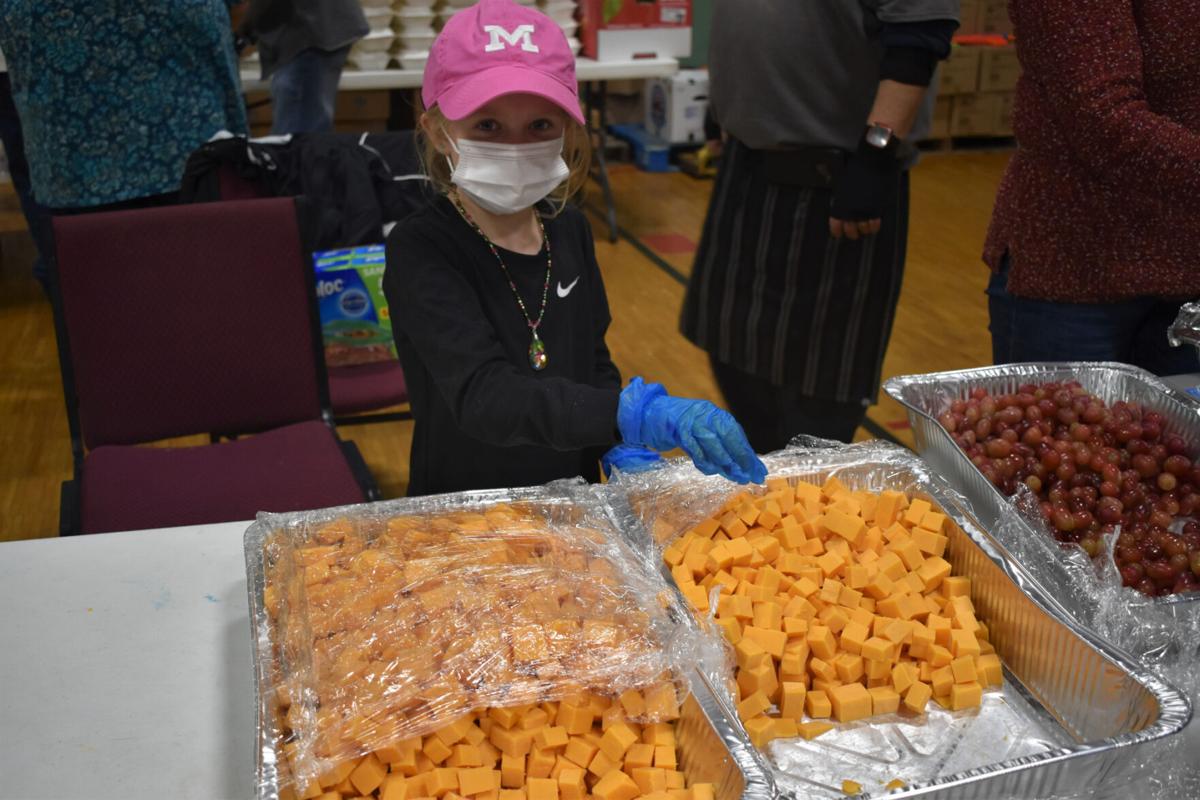 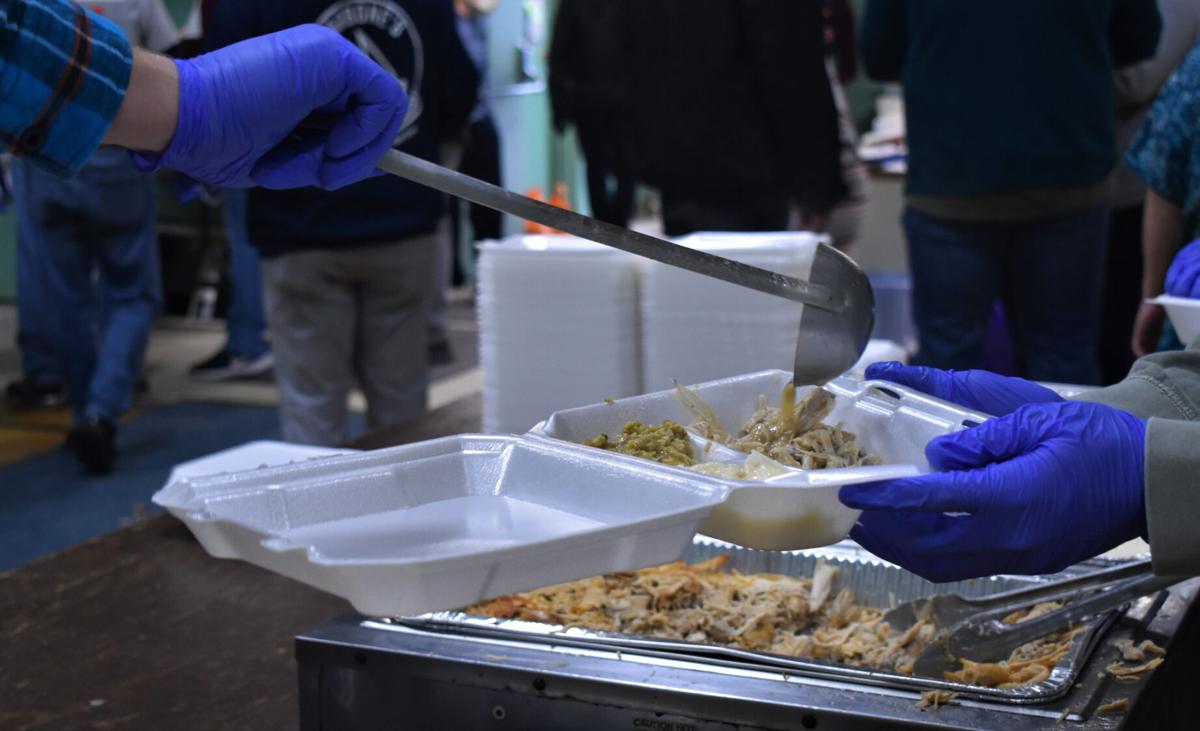 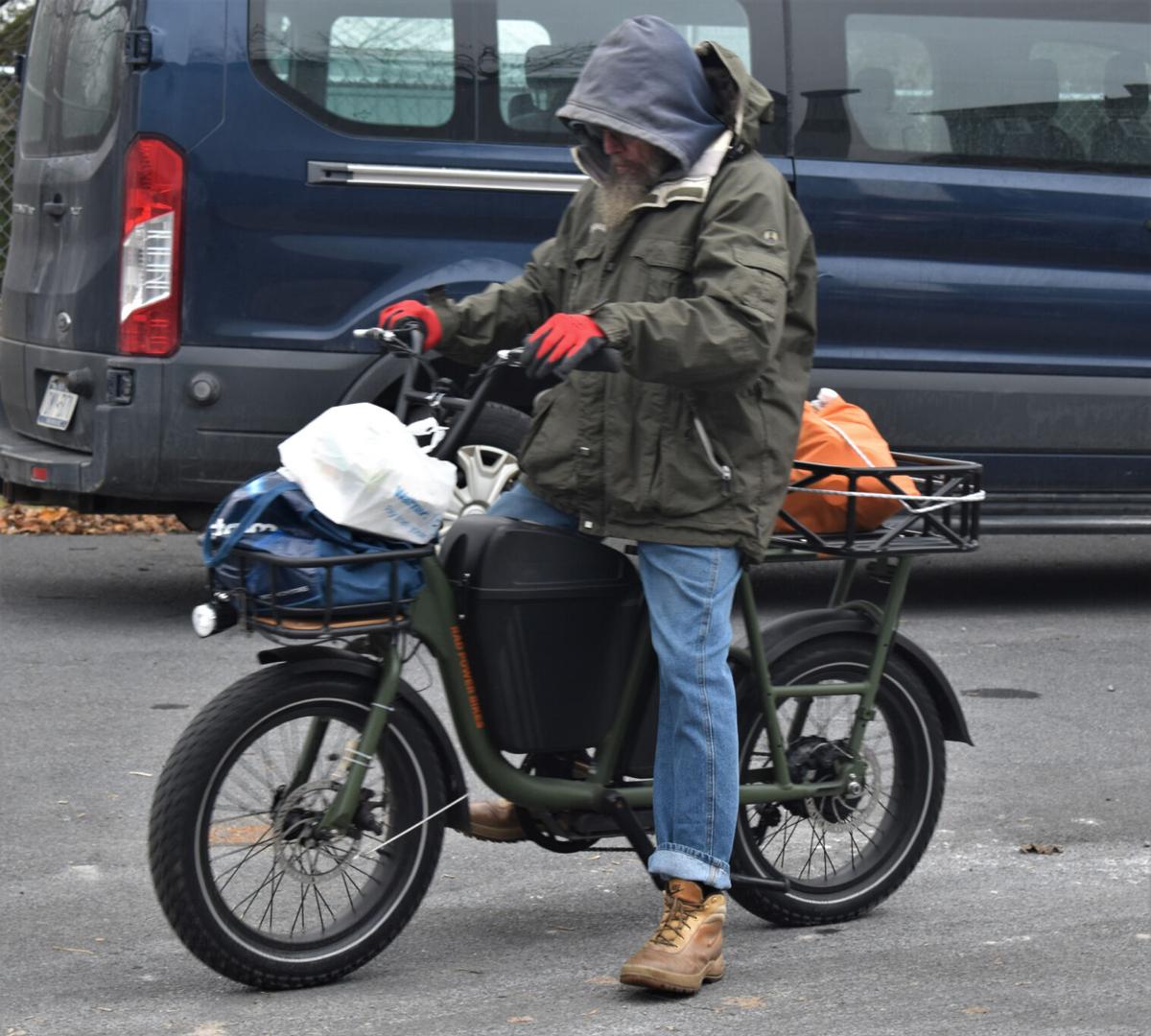 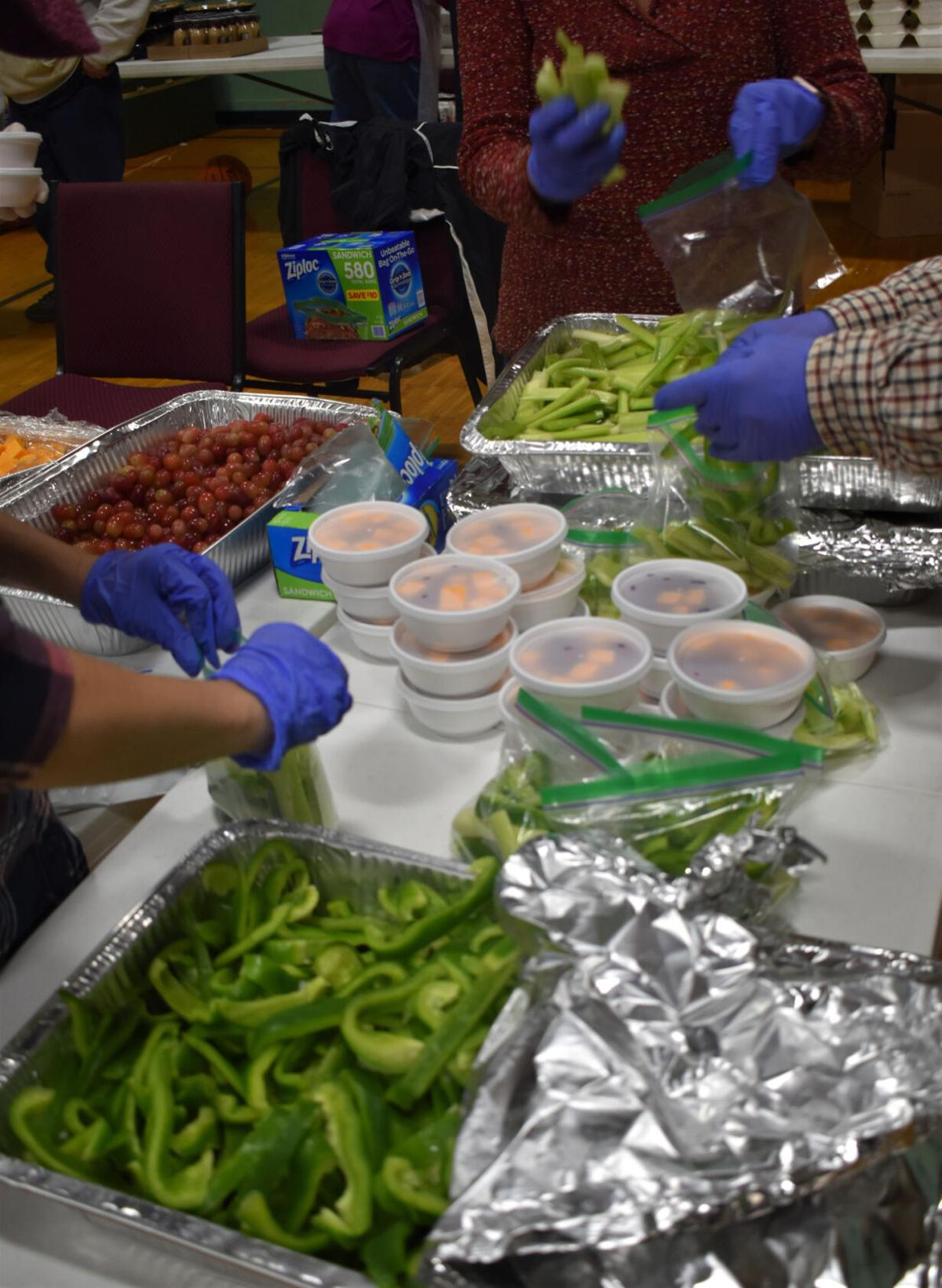 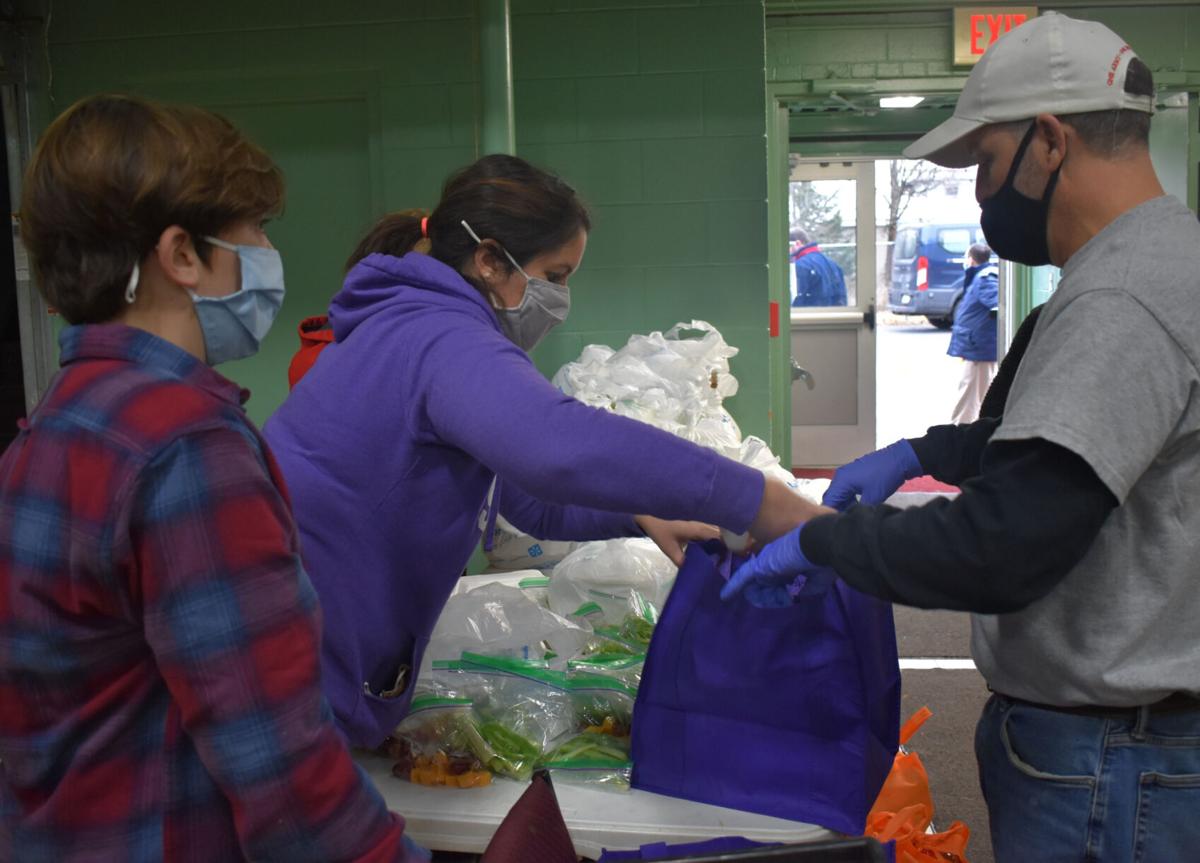 Amy Horton, center, helps to pack a bag with Case Middle School Principal Mark Taylor alongside her son Brady, 12, who said it is important to help those who may be less fortunate. Rachel Burt/Watertown Daily Times 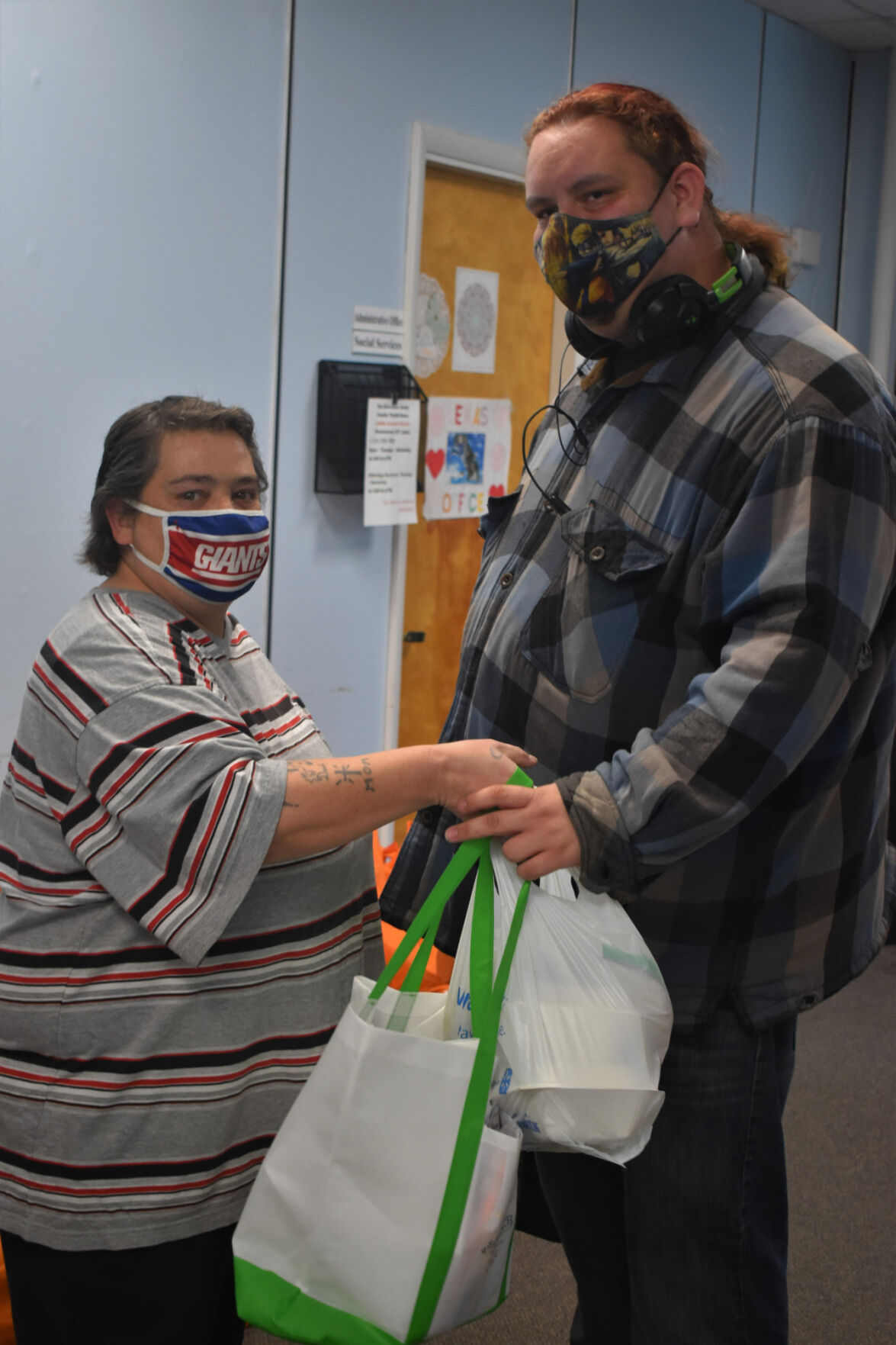 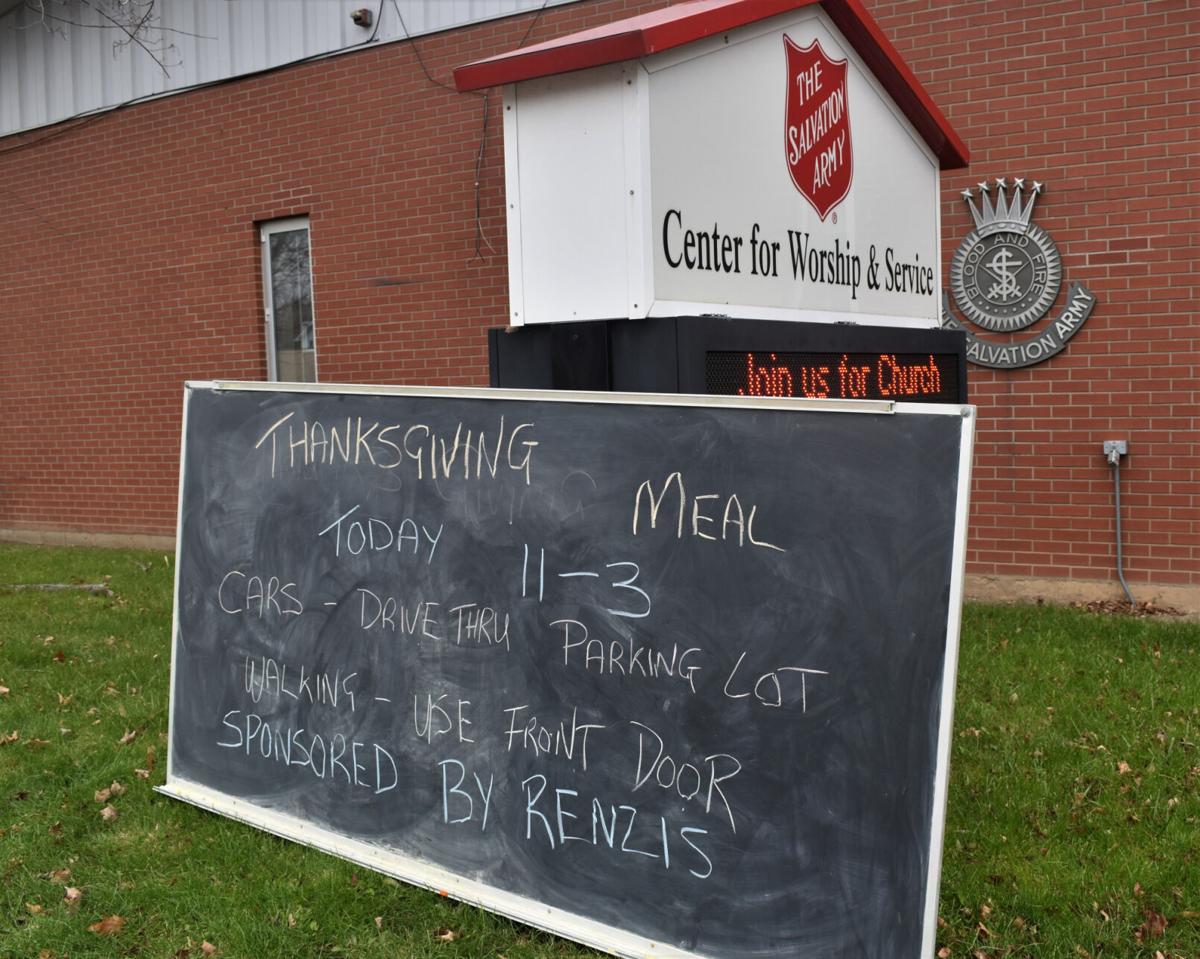 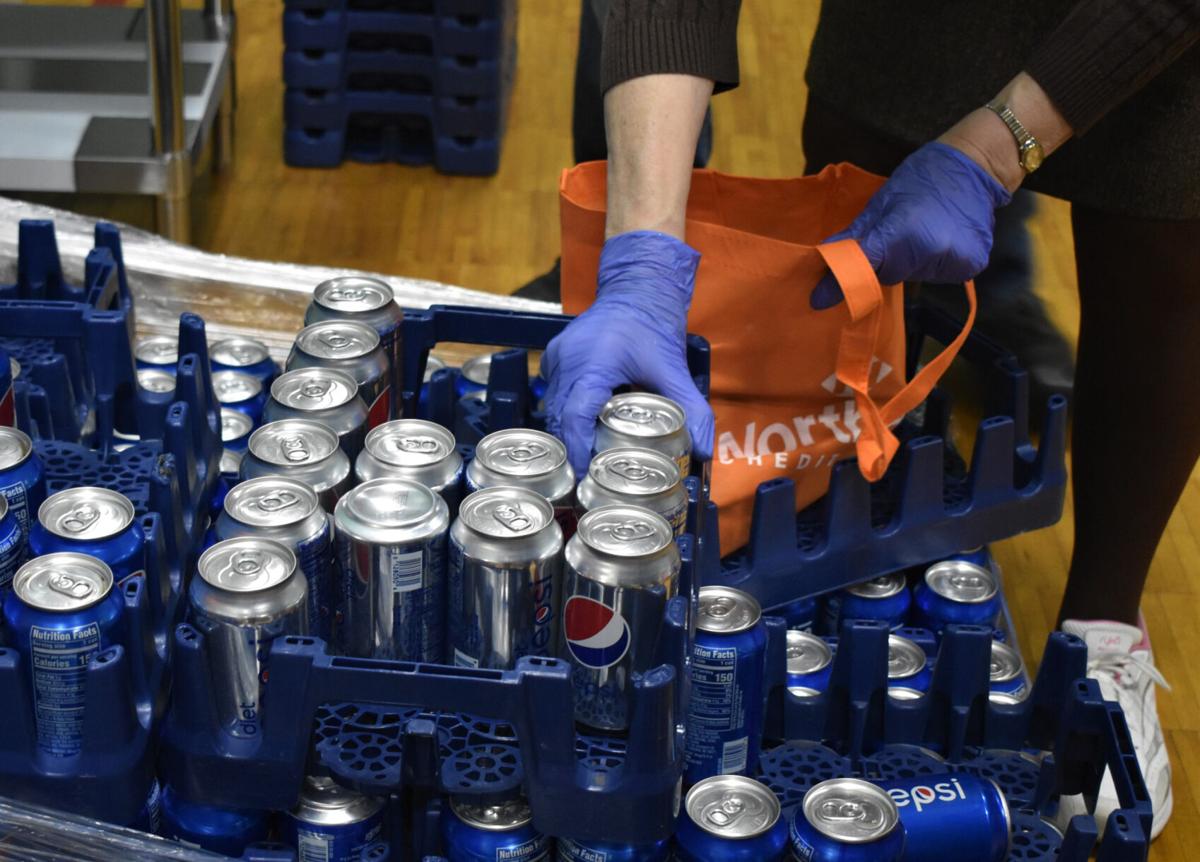 Amy Horton, center, helps to pack a bag with Case Middle School Principal Mark Taylor alongside her son Brady, 12, who said it is important to help those who may be less fortunate. Rachel Burt/Watertown Daily Times

WATERTOWN — As those volunteering with the local Salvation Army’s Thanksgiving meal service were hard at work Thursday either making deliveries or packaging orders, Grace Nichols, 6, was put in charge of assembling containers of cubed cheese and grapes after helping out with stuffing and cranberry sauce earlier in the day.

Her mother Holly Nichols, said it’s important to give back and teach kids to do the same from a young age. She and her family have been volunteering with the Watertown Salvation Army since 2010.

“We used to come with our friend Randy (Randal Corbett),” she said. “He came every year with us too, but he passed away this year, so it’s important to kind of carry on his legacy.”

Each year on Thanksgiving, the Salvation Army serves holiday meals for community members in need. Even amid a global pandemic, this year and last were no exception. The local chapter set a record for meals served last year, 872, and kept up the giving this year.

Inside the Salvation Army Worship and Service Center on State Street, tables were piled high with boxes and various food items set for delivery to those who couldn’t make it out to pick up meals, as well as those who would normally come inside to eat. Deliveries for the day began shortly after 10 a.m., and pick-ups began at about 11 a.m. and continued until 3 p.m.

“It’s a great opportunity to help the community out,” Salvation Army Capt. Dominic Nicoll said. “We are very blessed with the volunteers that have come forward, and we’re just thankful that we’re able to do this to make sure that those in need get to enjoy that meal.”

When all was said and done, 690 meals were given out in total this year, with around 500 to 550 of them deliveries, according to Mr. Nicoll.

Manning the pie station and adding the finishing touch — whipped cream — to slices Thursday morning, 11-year-old Nadji Booker has been helping out at the Salvation Army since he was 5 years old.

“First, it’s fun, and I like helping people out here, making sure they have meals,” he said.

The food being given away at no cost to recipients Thursday was largely donated by Renzi Foodservice. With so much provided food, the Salvation Army covered the cost of containers and miscellaneous items like foil pans and seasonings.

The meals given out Thursday included turkey, mashed potatoes, stuffing, green beans, cranberry sauce, a roll and a slice of pie. Extras given out this year included cans of Pepsi, donated by Pepsi, and chocolate milk donated by the Watertown City School District. Some fruits, vegetables and cheese, also courtesy of Renzi Foodservice, were included as appetizers.

Meals were picked up at a front table or in a rear drive-thru. All volunteers and recipients wore masks, and those dealing with food were provided with gloves.

Mr. Nicoll’s wife, Capt. Elizabeth Nicoll, came with her husband to the Watertown chapter of the Salvation Army in July. The two had previously held positions in Burlington, Vt.

“A lot of the people that we serve and bring meals to are shut ins and can’t get out of their houses or don’t have a vehicle to be able to either travel to family members or to even come here to pick up their meal themselves,” she said. “So we just want to really spread joy and give thanks to the community that’s done a lot for us.”

Volunteers were cheerful despite having been up and working since early in the morning. Between Wednesday and Thursday, there were 48 volunteers working to make the Thanksgiving effort a success. When meal recipients walked through the front door of the center, they were greeted by a pile of orange Northern Credit Union bags and a line of people ready to serve them and wish them a happy holiday.

Among those preparing meals in the front of the building was a group from Anchor Recovery Center consisting of Mary Castor and her son Zachary Castor, Curtis Brown and Jared Wells, who has been in recovery for over a year and said that giving back is an important part of his recovery foundation. The group was joined Friday by longtime Salvation Army volunteer Yvette Rolle.

“It’s something that makes you feel good, you’re getting better by helping other people in the community,” Ms. Rolle said about volunteering.

Those out front agreed that the point of Thursday was giving back to the community and seeing how grateful recipients were when picking up their meals.

One such recipient Thursday was Gordon Kenyon, of Watertown, who picked up a meal for himself and his mother.

“I’ve been coming to the soup kitchen for as long as I can remember and there are amazing people here,” he said. “All the people, all the staff are amazing, really kind and caring people.”