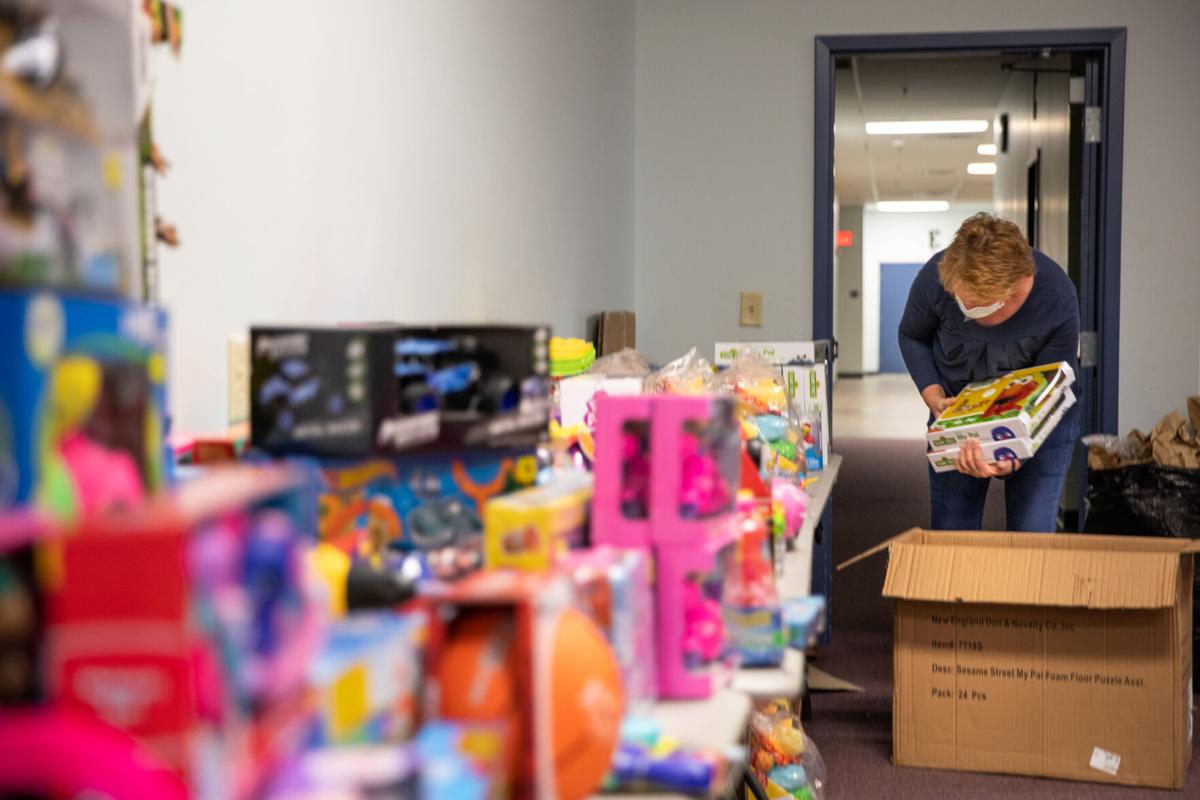 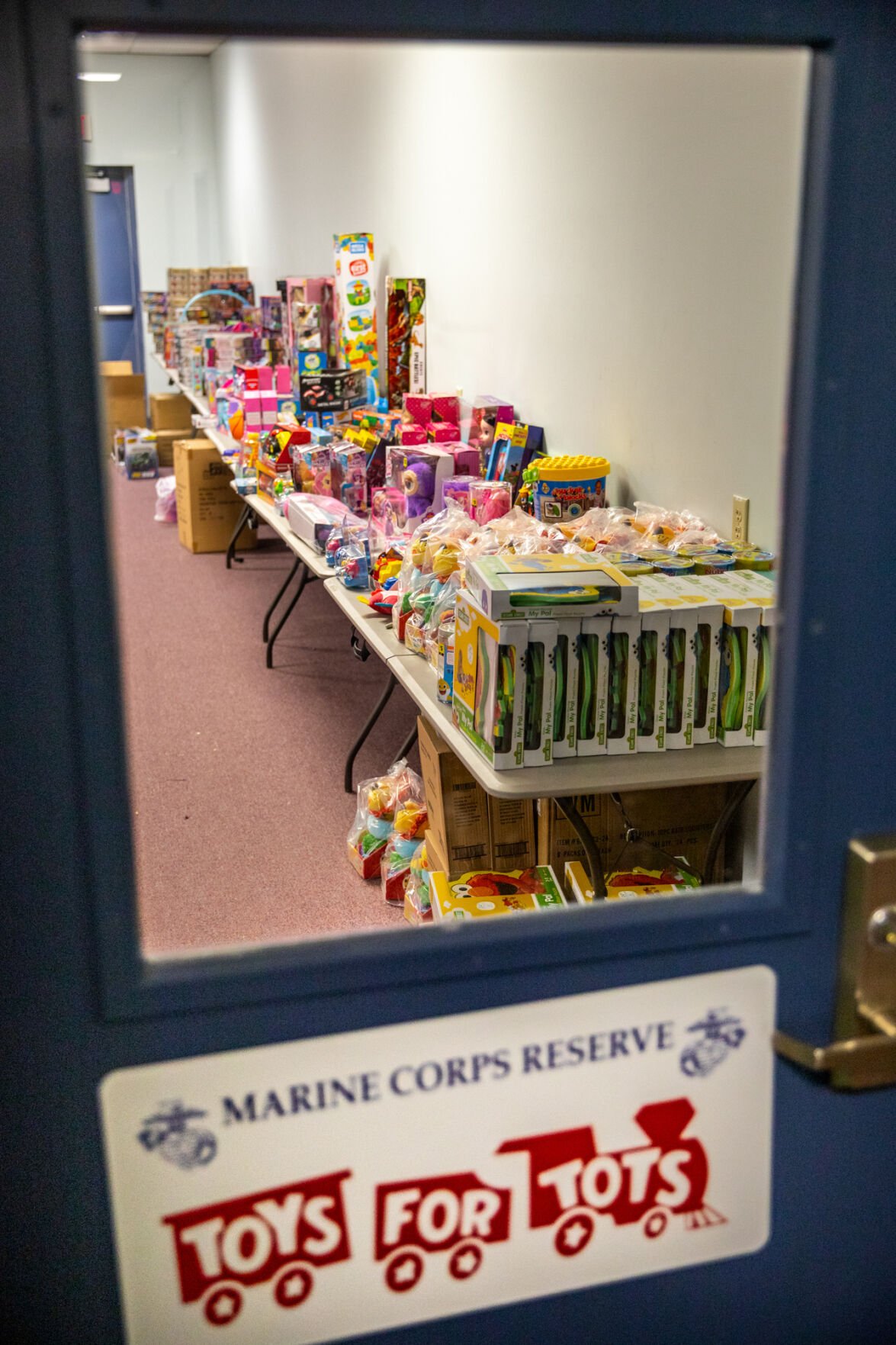 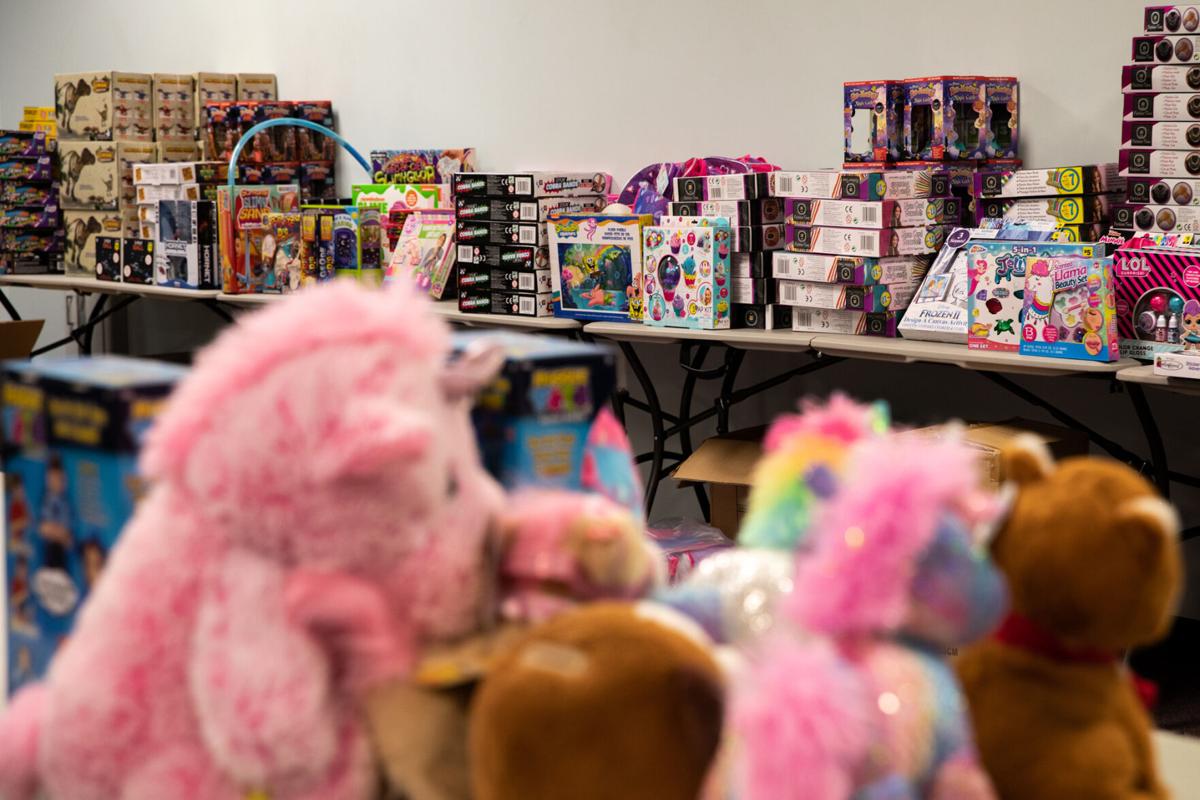 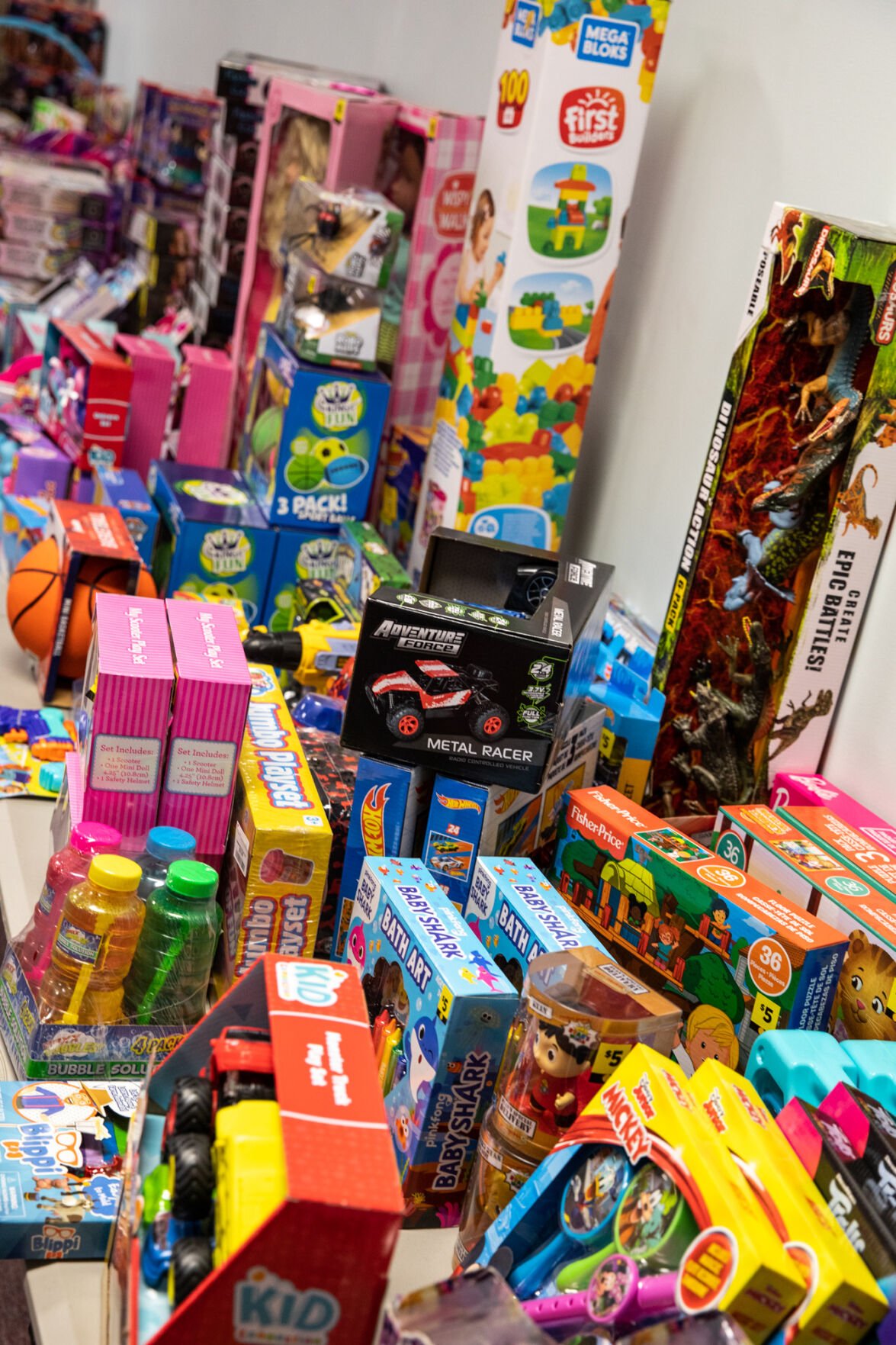 WATERTOWN — Toys for Tots of Jefferson County, once in danger of teetering into the void of winter, has been revived with the help of two childhood friends who are working to make sure needy children have their own Christmases to remember.

This is the second year for Michelle Tinsley serving as coordinator of the Jefferson County Toys for Tots program, which is run by the United States Marine Corps Reserve.

The nonprofit program distributes toys to children whose parents cannot afford to buy them gifts for Christmas. It was founded in 1947 by reservist Maj. Bill Hendricks and his wife, Diane, who collected and distributed 5,000 toys in the Los Angeles area in 1947.

Today, local campaigns are conducted annually in over 800 communities in all 50 states, the District of Columbia, Puerto Rico and the Virgin Islands. Toy collection campaigns in communities begin in October and last until mid to late December.

In 2018, Jefferson County Toys for Tots organizers had to go into Plan B mode for the holiday season after a pair who coordinated the program the previous couple of years, Gerry and Gina Chambers, could no longer continue their work because of health and personal reasons. A replacement team could not be found in time. That left members of the Jefferson Breakfast Kiwanis Club scrambling to come up with a plan. The local club has a long tradition of involvement with Toys for Tots and was able to make something work in 2018 with the help of local businesses and donors, but it wasn’t under the Toys for Tots banner.

Area coordinators must go through some stringent training through the U.S. Marine Toys for Tots before they can coordinate local programs.

In late 2018, Michelle Tinsley saw the bind that the local Toys for Tots unit was having. She and her husband, William Tinsley, were just coming off 25 years of running their family-owned Apollo Restaurant, which they closed in late December of 2018.

“I happened to see it in the Times that there wasn’t going to be a program and we were finishing up the restaurant,” Mrs. Tinsley said. “It was December, too late to start it then, so I signed up for the next year.”

In 2019, the Jefferson County Toys for Tots program supported 1,697 children through the donations of 4,582 toys. The Jefferson County program typically tries to give three toys per child, not including a stocking stuffer and a book.

“Last year, it was kind of a one-person show,” Mrs. Tinsley said. “This year, I have a good friend who is helping me a lot.”

A tragedy, and a promise to her daughter, brought Mrs. Reff into the program.

Lucy C. Reff, daughter of Laura and Mark A. Reff., died at the age of 23 on Jan. 12, 2019. She died from an undetected colloid cyst, which form within the fluid-filled ventricles of the brain. Lucy, a medical student at Upstate Medical University in the Respiratory Therapy Department who was due to graduate in May of 2019, had no warning of her condition. In December, a month before she died, she had a request for her parents when she was asked by them what she would like for Christmas.

“She said, ‘I don’t need anything. Take my money and buy toys for kids who need it,’” Mrs. Reff said.

Mrs. Reff said her husband had developed a tradition of helping needy children at Christmas time in the Clayton-area community.

“That resonated with us as another way to continue her memory as a way of helping people,” Mrs. Reff said. “Michelle asked me last year to get involved as another thing in memory of Lucy.”

Mrs. Reff said her involvement was limited in her first year with Toys for Tots.

“That first year, I knew emotionally I wasn’t able to commit to something where I had to be depended upon,” said Mrs. Reff, who works as a hairdresser. “I was kind of holding back. This year, I’m able to do some more stuff than I was and now that Michelle knows more, too, we can both schedule times for me to be able to do more. She didn’t know what to tell me last year to plan on. She’s been able to tell me stuff ahead of time more.’

That teamwork has created a certain goal for Jefferson County Toys for Tots.

“This year, we wanted to expand the number of families who get the toys,” Mrs. Reff said. “Michelle felt she didn’t have good information on that last year.”

Donations from community members form the backbone of Toys for Tots. People can drop off new, unwrapped toys in collection boxes located in local businesses. In Jefferson County, as of late last week, there were 46 toy drop-off sites for the program. Toys for Tots also accepts cash donations.

Coordinators pick up the toys from the drop-off sites and store them in central warehouses where the items are sorted by age and gender. In Watertown, that work is done in the donated space of the Bruce M. Wright Memorial Conference Center on Faichney Drive.

“I know a lot of places have to pay rent,” Mrs. Tinsley said. “And they let me store whatever extra I have there for the year. They give me a nice room and all the tables I can use.”

The toys at the center are divided up by gender and age, largely with help from the local Kiwanis Club. The toys are organized, bagged and then picked up by the various groups who were contacted by people requesting toys.

“They send me a list of each age and gender and I bag up toys for the numbers they give me and someone from their group comes and picks them all up,” Mrs. Tinsley said.

One of the agencies that the Jefferson County unit works with is the Watertown Urban Mission.

“They’ve already seen an increase in need,” Mrs. Tinsley said. “I’ve had more people contact me this year already, so I assume the need is going to be greater.”

But Dunkin’ Donuts may be acting like Santa for the local program this year. The company is donating $10,000 to the Jefferson Country Toys for Tots for the purchase of toys.

“It literally came out of thin air,” Mrs. Tinsley said. “With the pandemic, I was worried there will be increased need and possibly lower levels of donations. This donation will help the program immensely.”

Mrs. Tinsley said Toys for Tots has a list of selected vendors that offer good prices to the organization.

Such community support extends to transporting the toys. The Watertown Urban Mission and Hole Brothers Holdings offered the use of box trucks to transport toys. Other support this year has ranged from an annual $5,000 donation from the Kiwanis Club to labels from Staples for the organizing of donations to the gift, from Lowe’s, of 400 garbage bags used to transport toys.

“Any place that I’ve walked into, as soon as they hear Toys for Tots, they say, ‘How can I help?’” Mrs. Tinsley said. “It’s been very nice.”

“Michelle had no contacts for the river communities of families that need toys,” Mrs. Reff said. “The elementary schools have a set list of families they know of will need help. They were ecstatic this year that because of COVID and limited resources, to be able to get help getting toys, so they didn’t have to just rely on their staff and the normal ways that they do it.”

Some staff of LaFargeville Elementary also plan to help organize the toy sorting and distribution.

The local donations are especially gratifying for Mrs. Reff.

“People are being so generous in Lucy’s memory,” she said. “Lucy worked so hard to get where she was in her degree because school was very hard for her. I just didn’t want her forgotten. This is great for the family to see — that people are still remembering her and honoring her. Lucy is helping other kids have a nice Christmas who might not get the material things.’’

The end of this year’s local Toys for Tots campaign is Friday, Dec. 11. Through it all, Mrs. Reff said she has come to appreciate Mrs. Tinsley’s personal touch that she tries to bring to many families. For example, the way parents are able to wrap the presents for their tots, and teens, themselves and trying to fill a specific toy wish.

“It’s a way for the parents to give to their kids like they’re the Santa, like we all do when we have little kids,” Mrs. Reff said. “That’s the fun of it. Playing Santa.”