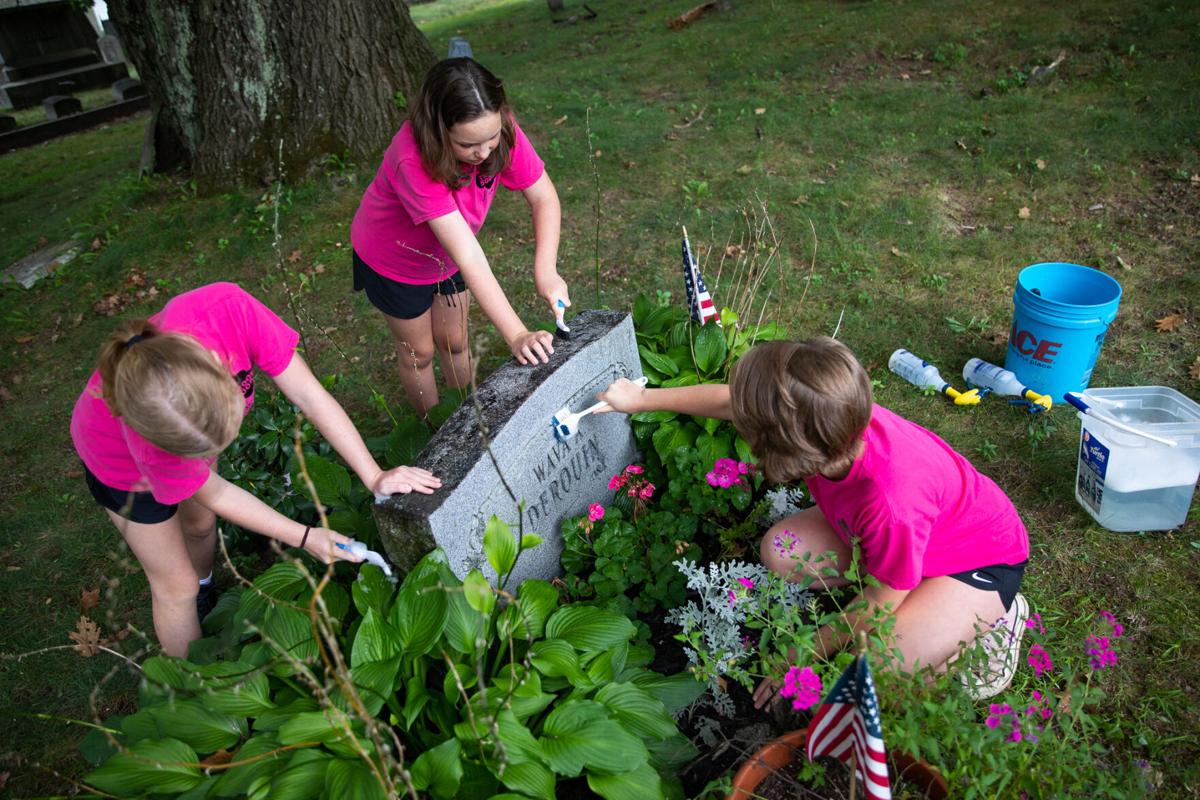 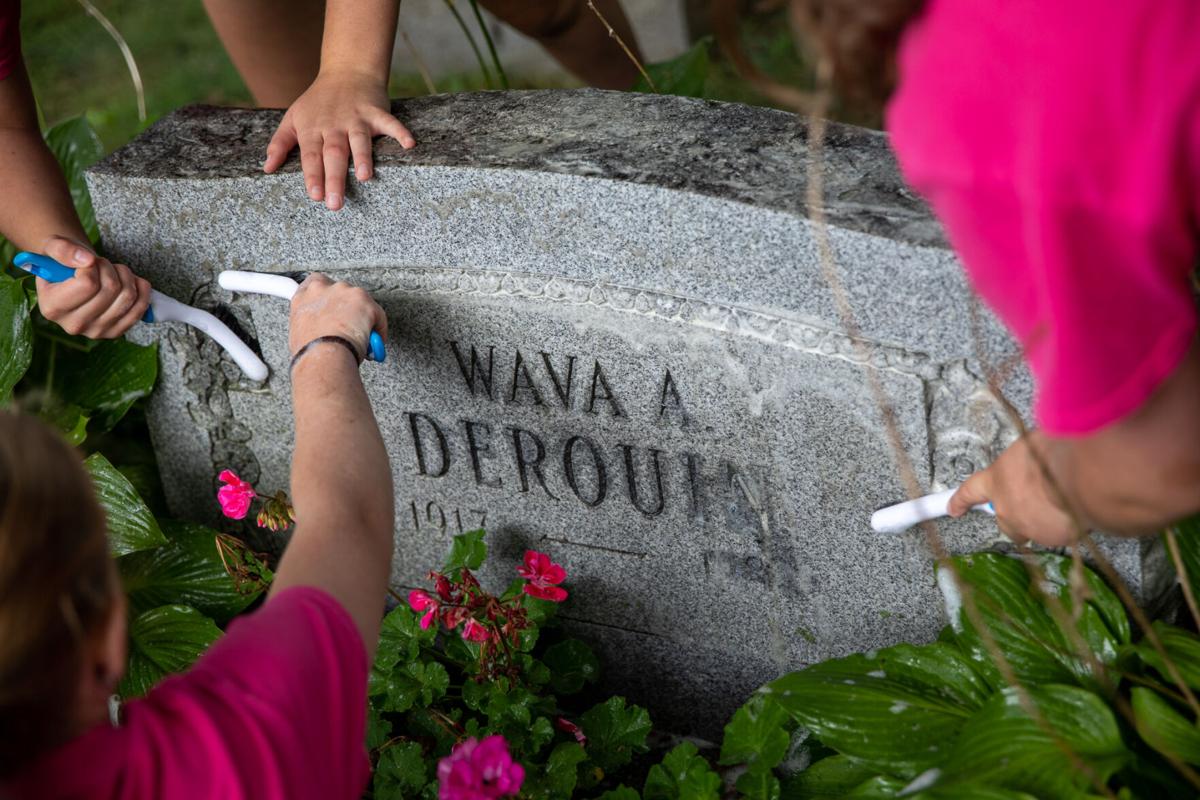 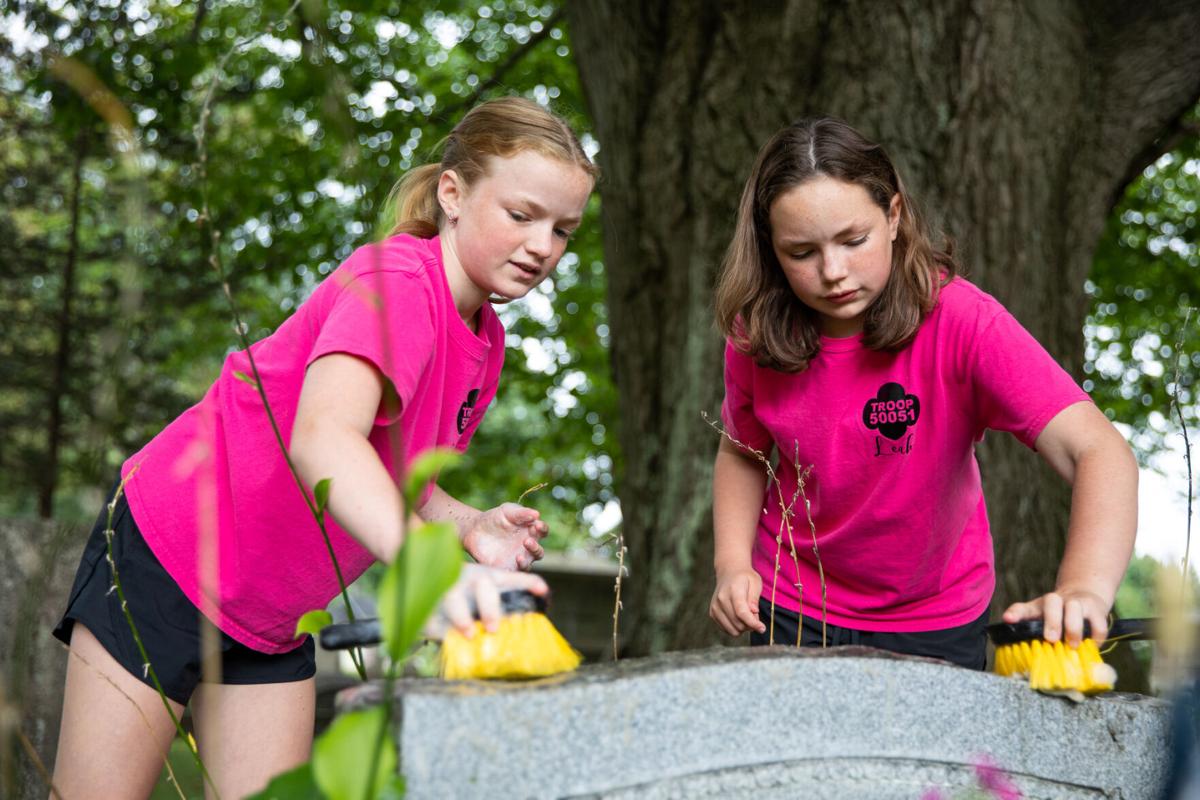 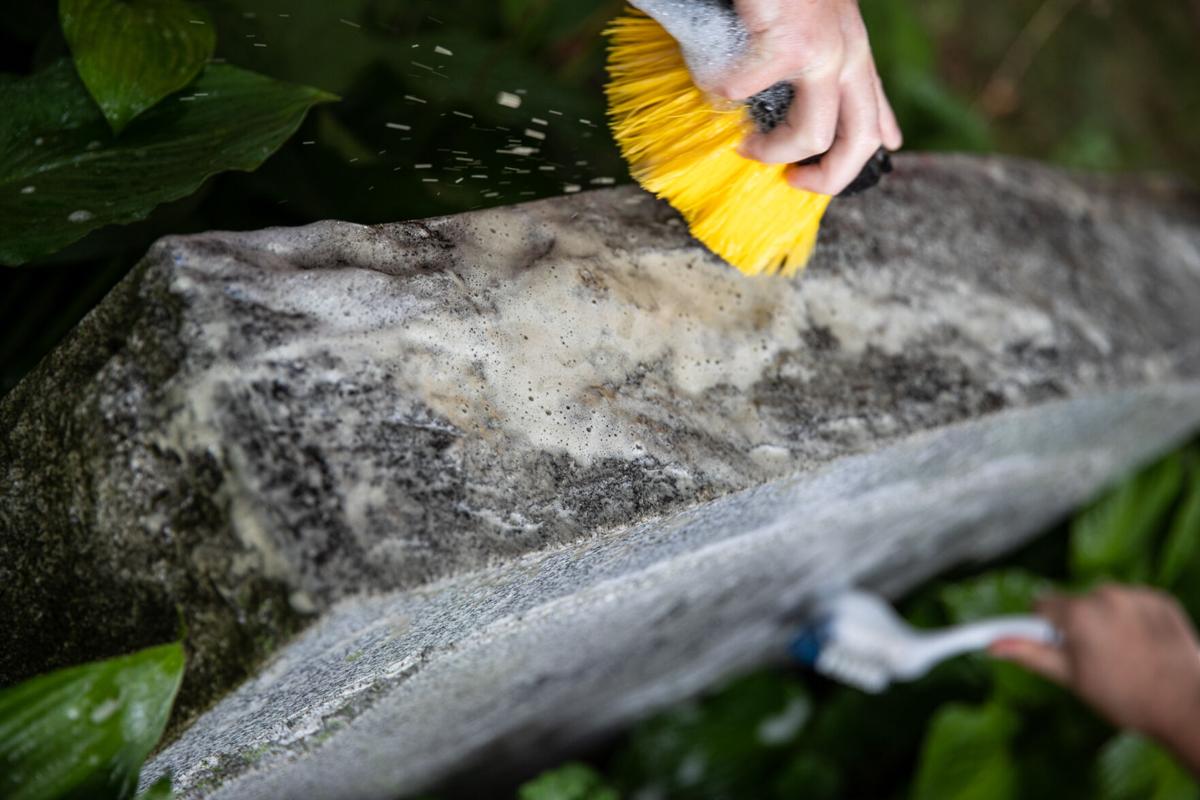 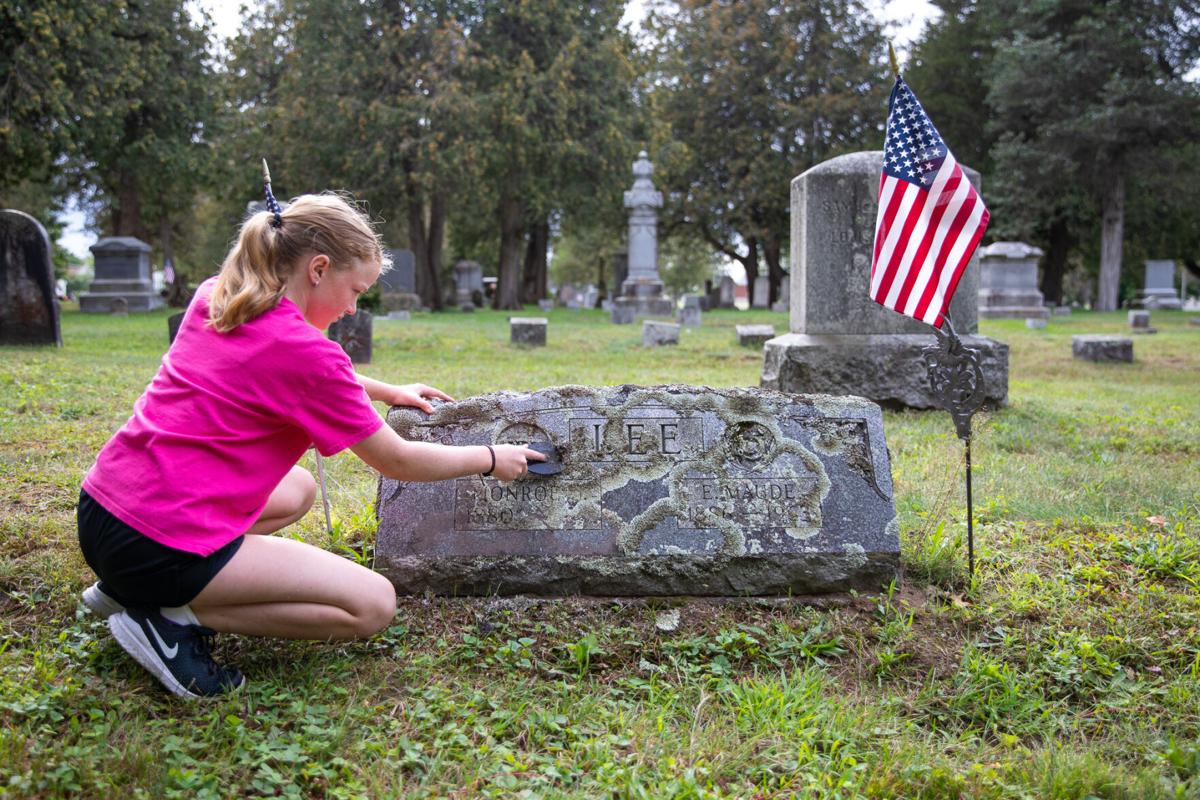 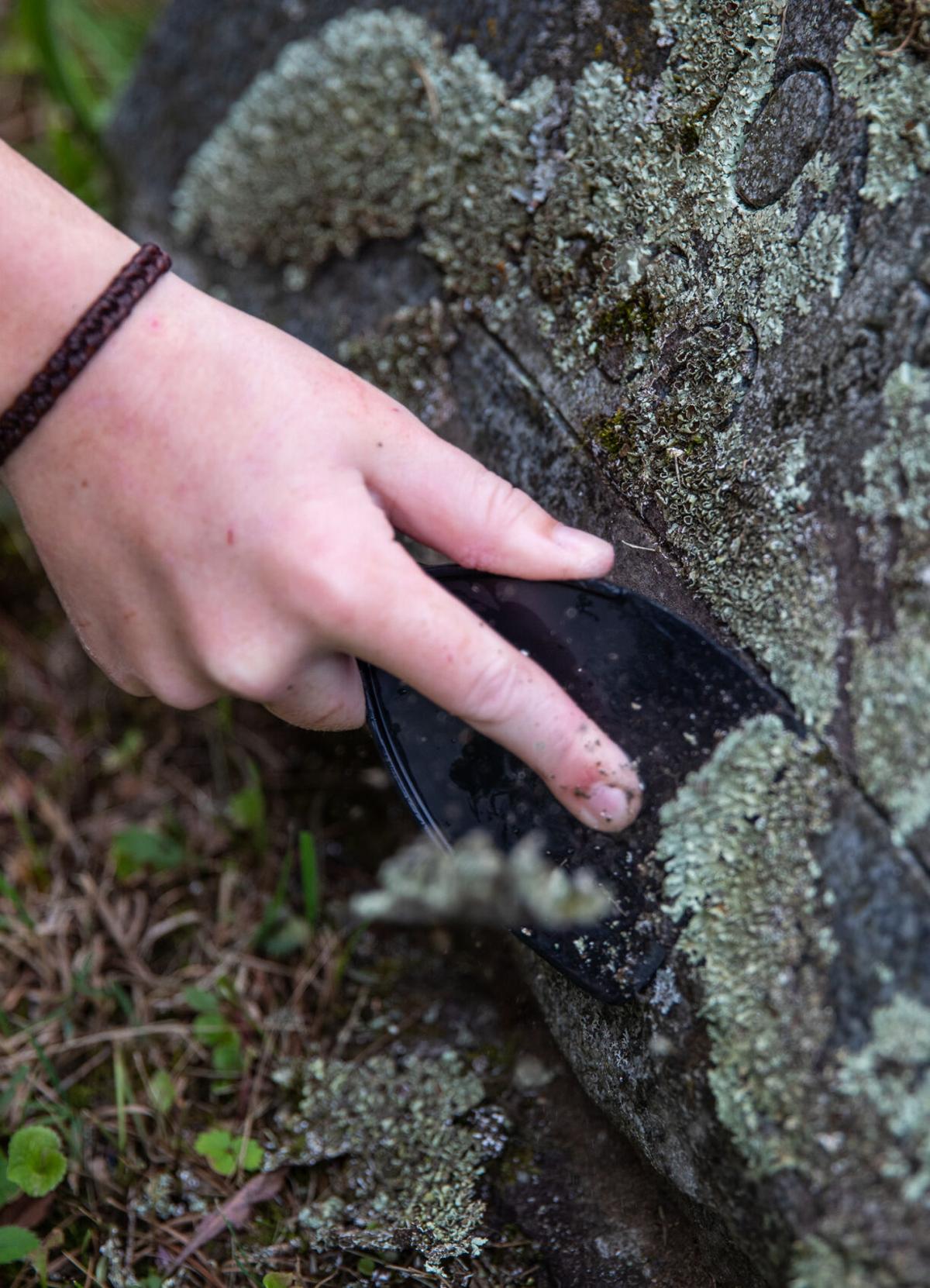 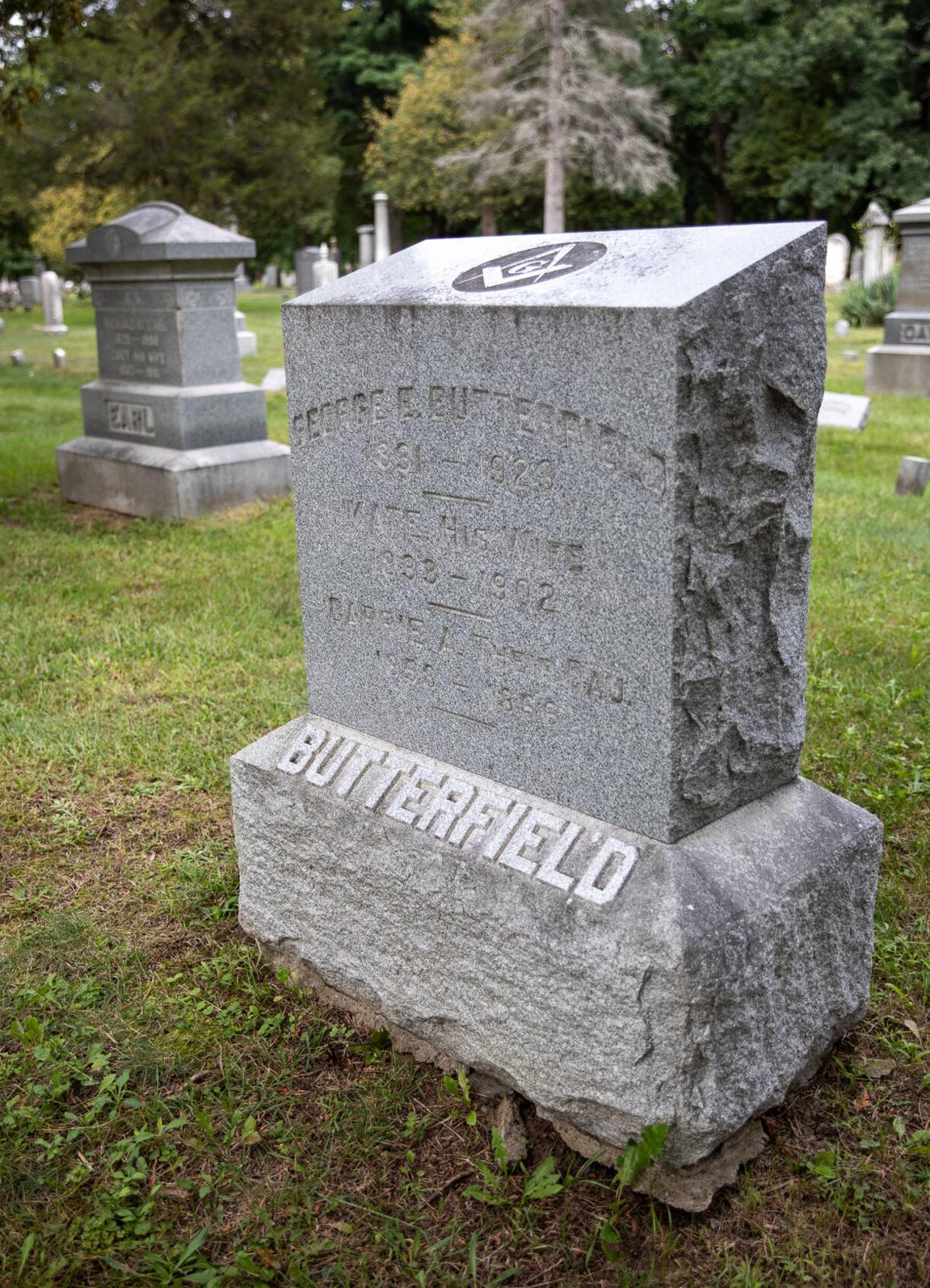 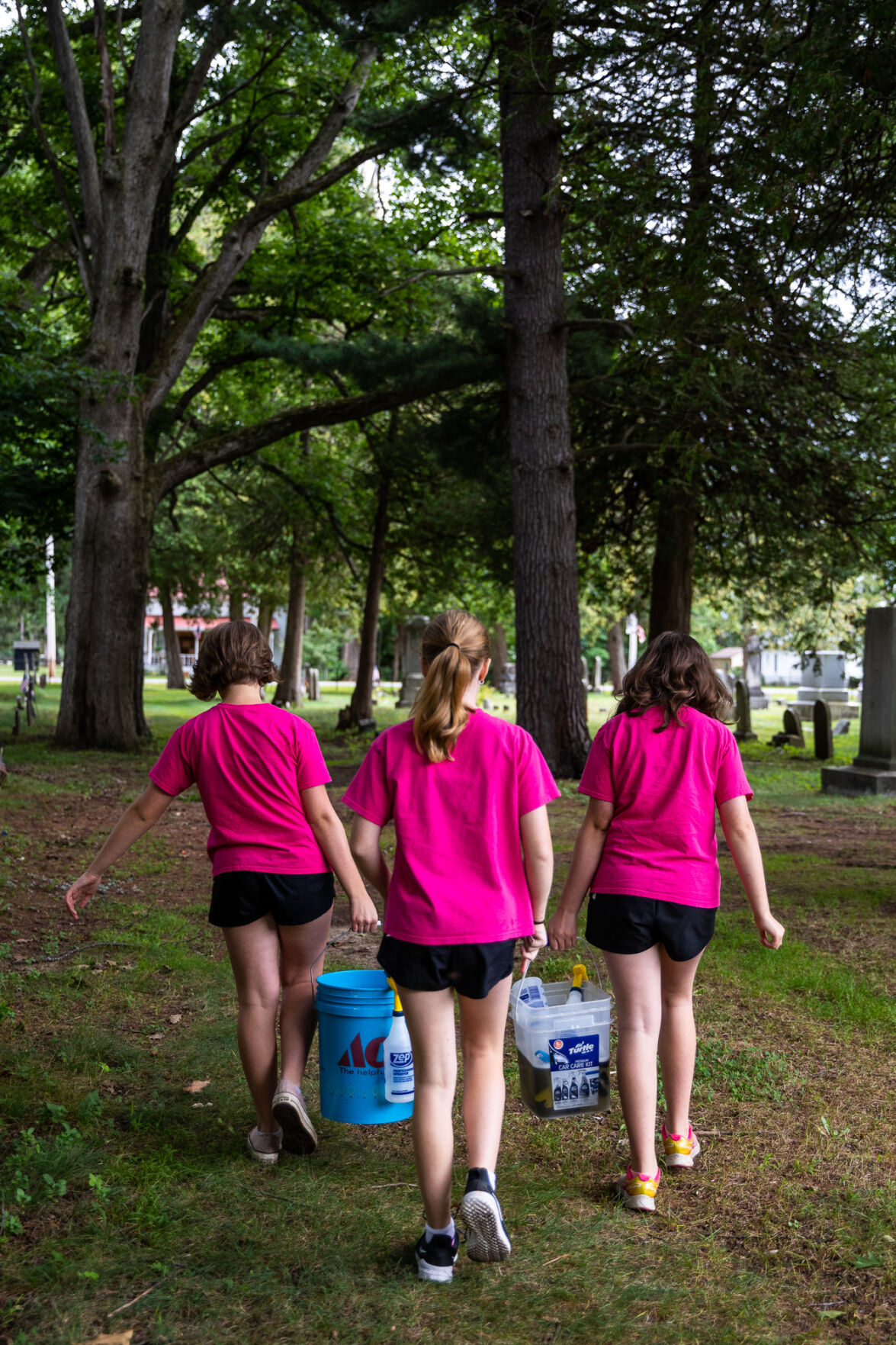 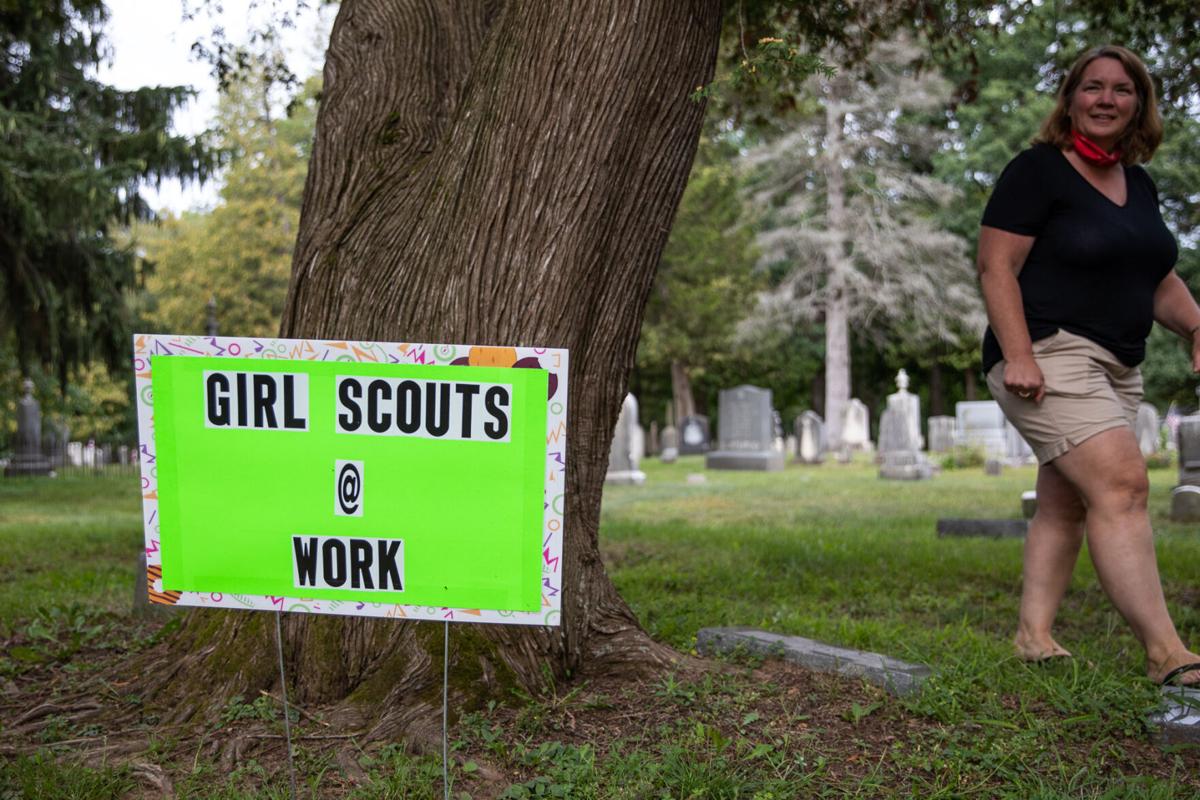 Brenda M. Jock, leader of Girl Scout Troop 50051, passes behind a sign her and the scouts place on the roadside near Lakeside Cemetery, 320 Dodge Ave., Thursday in Sackets Harbor. Kara Dry/Watertown Daily Times

Brenda M. Jock, leader of Girl Scout Troop 50051, passes behind a sign her and the scouts place on the roadside near Lakeside Cemetery, 320 Dodge Ave., Thursday in Sackets Harbor. Kara Dry/Watertown Daily Times

SACKETS HARBOR — When it comes to cleaning gravestones, the biggest thing to remember is to do no damage.

This lesson, among others like rinsing stones from the top down or techniques for scraping off lichen and checking stones for stress cracks, is one that has been employed time and again this summer as cadets of Girl Scout Troop 50051 put their needed volunteer hours to good use cleansing stones of sometimes years’ worth of grime.

“We’re checking for stress cracks,” said Girl Scout Kailyn A. Scheible, 13, as she used a spray bottle to wet a headstone in Lakeside Cemetery on Thursday afternoon. “As it dries, you can see the cracks because it will dry slower.”

A junior of the troop, McKayla Mower, was not in attendance Thursday, but has also been hard at work cleaning graves this summer in the Military Cemetery across the street. She recently finished her 20 volunteer hours for the Bronze Award and has submitted her paperwork. The other members of the four-girl cleaning crew must complete a total of 50 hours and are already more than halfway there.

The two other Girl Scouts in attendance Thursday, rounding out the cleaning crew, were Alexandra L. and Leah M. Derouin, 12 and 13, respectively. Brenda M. Jock Derouin, a parent of the two of the girls and one of Troop 50051’s leaders, said that because of COVID, the girls couldn’t really do much last year and started the cleaning in July.

They went to the cemetery committee meeting in the town of Hounsfield and proposed what they wanted to do, making sure everything was OK before they started, and then did a little research on how to clean. According to Mrs. Derouin, she contacted A Cozzi & Wilson’s to see what they would recommend, which was not to use chemicals, just Dawn dish soap and a stiff brush. The girls later developed a slideshow so they can teach other volunteers coming in how to clean before they start.

“With the Silver and Gold awards for Girl Scouts, they have to have a sustainability portion, so they’re also forming a subcommittee on the cemetery committee that’s dedicated to cleaning headstones, so it’ll be a yearly rotation because obviously there’s a lot of headstones,” Mrs. Derouin said. “The committee would be a group of people that are committed to each year cleaning headstones, a continuous process, so eventually they’ll all be cleaned and then kind of start over again to kind of keep the process up.”

Beyond the gravestones, they have more plans for the cemetery, including the flagpole that needs to be painted and have its flag replaced, some landscaping over around the building and sign toward the entrance of the cemetery, and painting the post for the sign.

As for why they chose to clean the gravestones, the simple answer is why not? As Mrs. Derouin explained it, many who are buried in the cemetery most likely no longer have relatives in the area to maintain their graves.

“If we don’t take care of them, I’m not sure there’s anybody that would,” she said. “I think that’s important, too, and we’ve encouraged people that if they have family members to come clean with us, it’s satisfying to take one that you can’t even read and clean it.”

On Thursday, using a massive oak tree as a guide that many in the county think may be among the oldest — if not the oldest — oak in Jefferson County, and armed with buckets and brushes, the girls cleaned the grave of Alexandra and Leah’s great-grandmother Wava A. Derouin, demonstrating just what it takes to clean a headstone. The main thing one needs, aside from soapy water and the proper tools, is elbow grease.

Alexandra’s favorite part of grave cleaning is peeling off lichen, which she said was “very satisfying,” though it does get tiring after awhile. Something all the girls agreed on is they like rinsing the stones off to see the “before and after” following a well-done cleaning job.

Favorite cleaning jobs for the girls were unanimous: Butterfield and Earl. According to Alexandra, Earl was quite dirty and had a lot of lichen before, so much that the words on the stone were unreadable.

In their cleaning, the Girl Scouts have come across some interesting names like opera singer Francis L. Bible, who was born in the village. Unfamiliar with the name, they googled her and learned some cool things about the star, linking their volunteer cleaning with the rich history of the village. They remain on the hunt for land developer and owner Augustus Sackett, for whom the village is named.

“It feels nice to clean for people I don’t know, because others can’t do it,” Leah said as she moved to another dirty section of headstone. “A lot of the people here (in the cemetery) actually helped Sackets, they’re important here. It’s just nice to know that famous people were born and raised in Sackets.”

As the cleaning wraps up for the fall and the girls return to school, Mrs. Derouin noted that they are always looking for more volunteers to help out when they start back up again in the spring and summer due to the sheer amount of headstones that need to be cleaned. Those interested can reach her at bjock91@gmail.com to become involved with the effort.