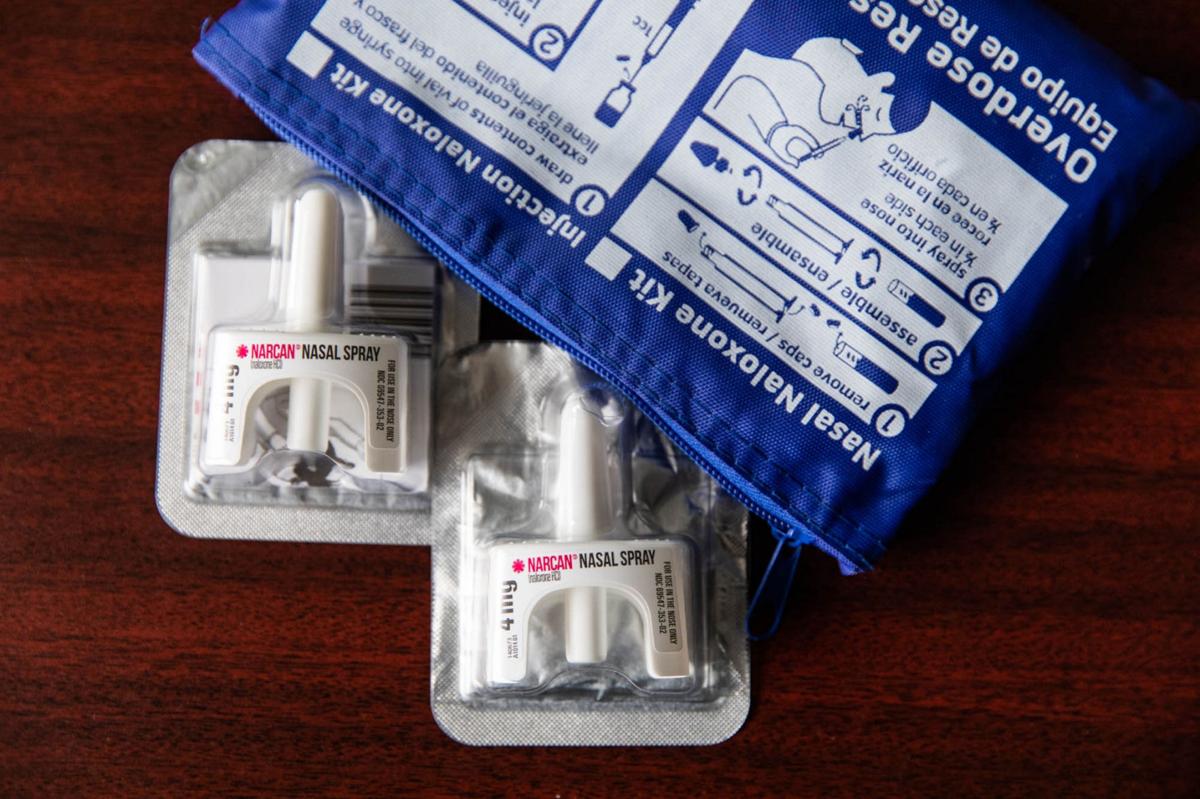 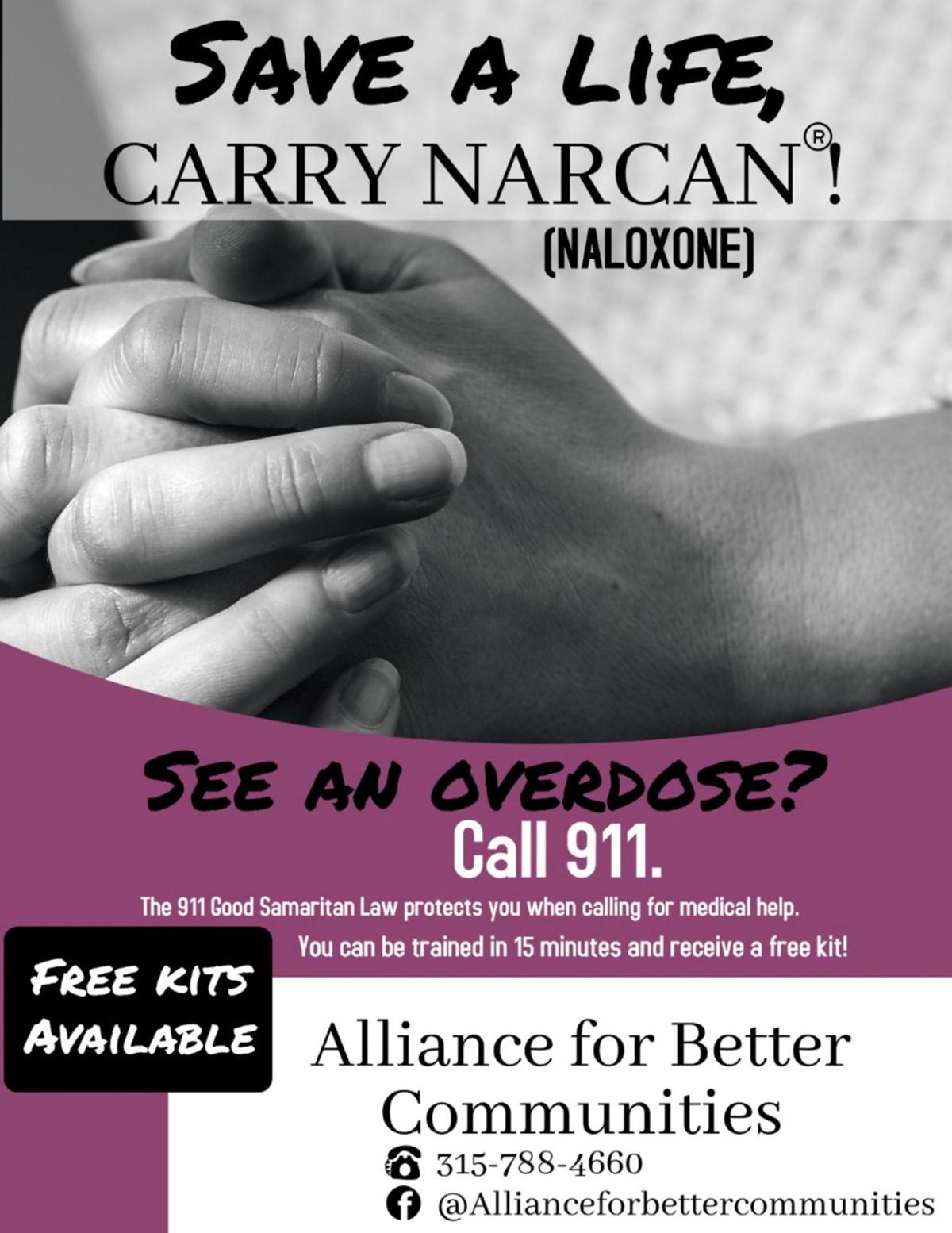 WATERTOWN — At the beginning of June, the Alliance for Better Communities joined forces with drug-free communities task forces in Lewis and St. Lawrence counties to increase messaging about Narcan and services available to those using substances, as well as their families.

The new campaign, encompassing radio, physical flyers, and social media, was launched in response to a spike in overdose deaths and overdose reversals in the beginning of the month that ended with a confirmed eight deaths in June.

“We reached out to our coalition partners in St. Lawrence and Lewis counties with the goal of creating a comprehensive media campaign geared toward different audiences,” said Anita K. Seefried-Brown, project director for the Alliance for Better Communities. “The main audience, of course, is our peers who are still using, as well as community members to educate about Narcan, to destigmatize Narcan, and to encourage people to carry Narcan.”

In the meantime, the Alliance and its partner agencies have met on a weekly basis and have flyers made promoting the Narcan message. The flyers will be posted on social media platforms throughout Jefferson, St. Lawrence, and Lewis counties, with the next step being to contact various entities in their respective counties to ask for permission to display the posters.

Joining in the effort to raise awareness about Narcan and services available to those who use drugs as well as their families, the Rev. Jeffrey E. Smith, pastor of the First Baptist Church, lent his voice to radio ads that began running this past Saturday as part of the campaign. The Rev. Smith is one of the ministers who conduct many of the funerals of overdose victims in the area, and his message to the community in the radio ads is straightforward: he doesn’t want to conduct your funeral and encourages people to seek help.

The Alliance has also created an 18-second-long video to be displayed on various social media platforms featuring a young person with symptoms of despair and the messages that Narcan is available to those who need it. The message is simple and clear: “Maybe you’re not ready to quit today, but make sure you’re here for tomorrow.”

“The campaign we’re putting together is designed to be a lifesaving campaign,” said Mrs. Seefried-Brown. “Since the last warning was issued on June 22, the overdose activities have been reduced to almost zero, only one reversal of an overdose was entered into the ODMAP system.”

While the Alliance and other involved parties do not know the reason for the current reduction in overdoses, according to Mrs. Seefried-Brown, organizations involved would like to think that the increase in messaging about Narcan, the 911 Good Samaritan law, and the dangers fentanyl poses may have contributed to the reduction.

Narcan is a lifesaving medication that reverses the effects of an opioid related overdose within 20 minutes. Available in kits, it comes preassembled ready to use, does not require priming and after use is absorbed right into the bloodstream.

Credo Community Center Narcan Trainers can provide individualized training based on a person’s needs. For more information or to schedule free training, for you and/or your organization, contact Credo at: (315) 788-1530 x100 or ooppcredo@credocc.com.

Narcan kits will be disbursed based on availability, and virtual Narcan training can be scheduled through Credo’s website at http://credocc.com/narcan/. Narcan will also be available from a variety of entities. Those interested in obtaining Narcan can simply call the number listed on either the flyers or the video and they will be connected with an entity that can help.

Fast food restaurants will also be contacted and asked to display the flyers in their restrooms.

“We’re not quite sure if the local franchisees can make the decision locally, or if we have to go to headquarters, which may take a while and they may not approve it,” Mrs. Seefried-Brown said. “However, given the COVID-19 pandemic, as well as the opiate epidemic, it would stand to reason that corporations would do anything to help alleviate the risk of people dying, particularly in their establishments.”

All Narcan does is prolong addiction. Not the answer to opioid abuse.