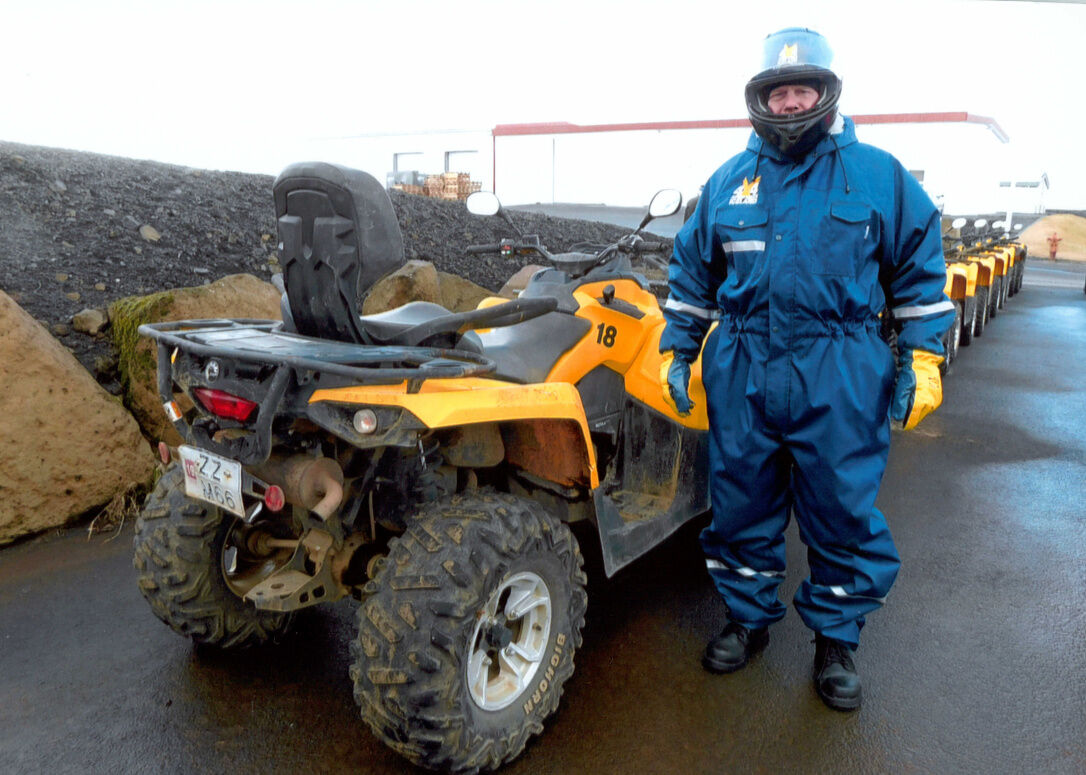 Stanley Bingham, all dressed and ready to go explore lava fields on an ATV. Bingham photo 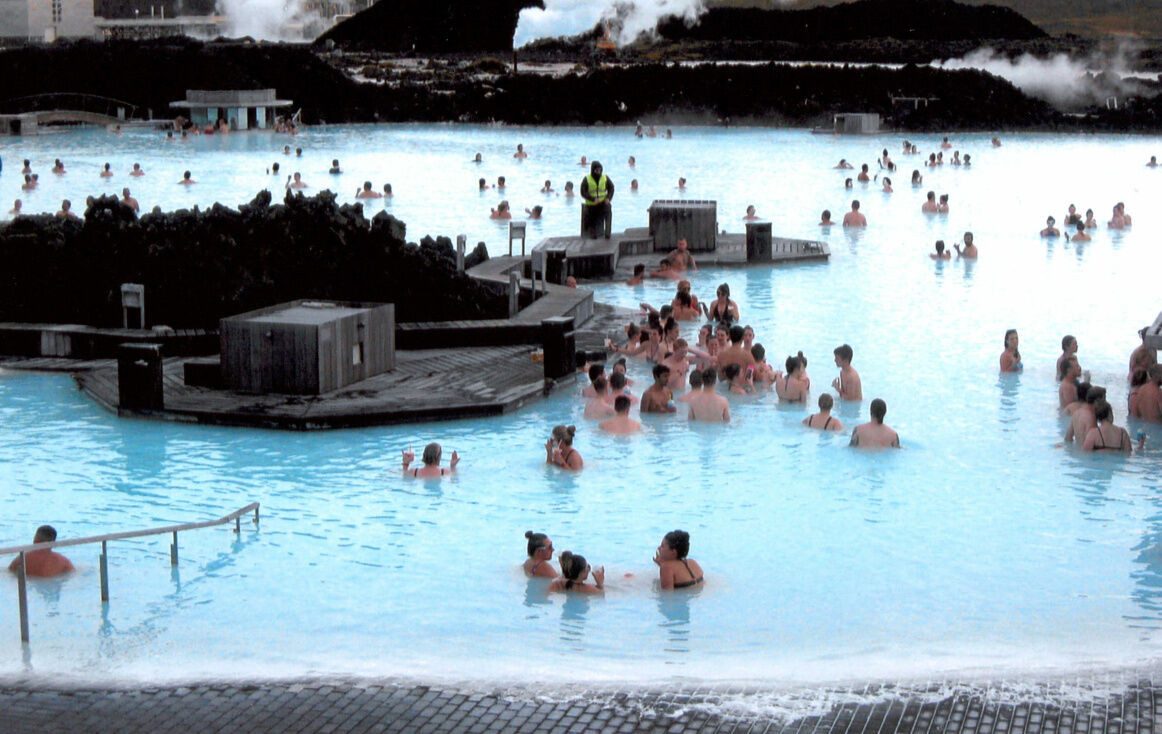 Blue Lagoon — a geothermal spa is supplied by water used by the geothermal power station in the background. It is a man-made lagoon in a lava field. Bingham photo 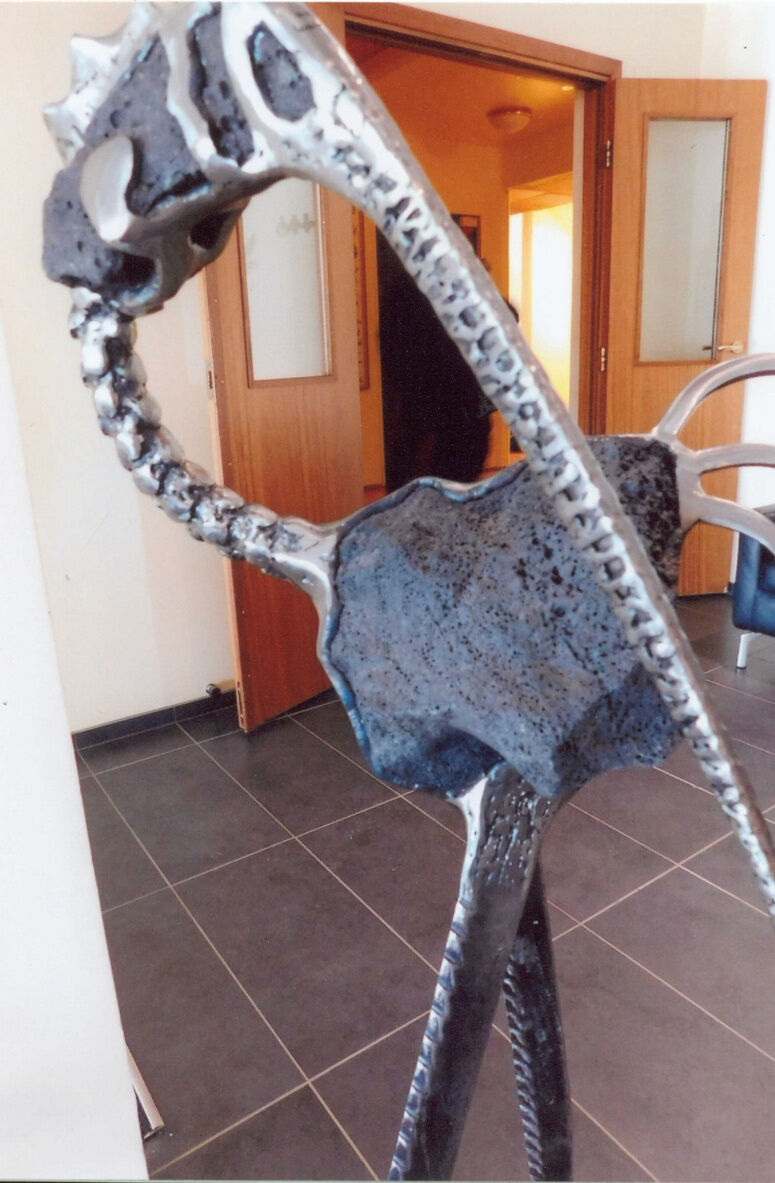 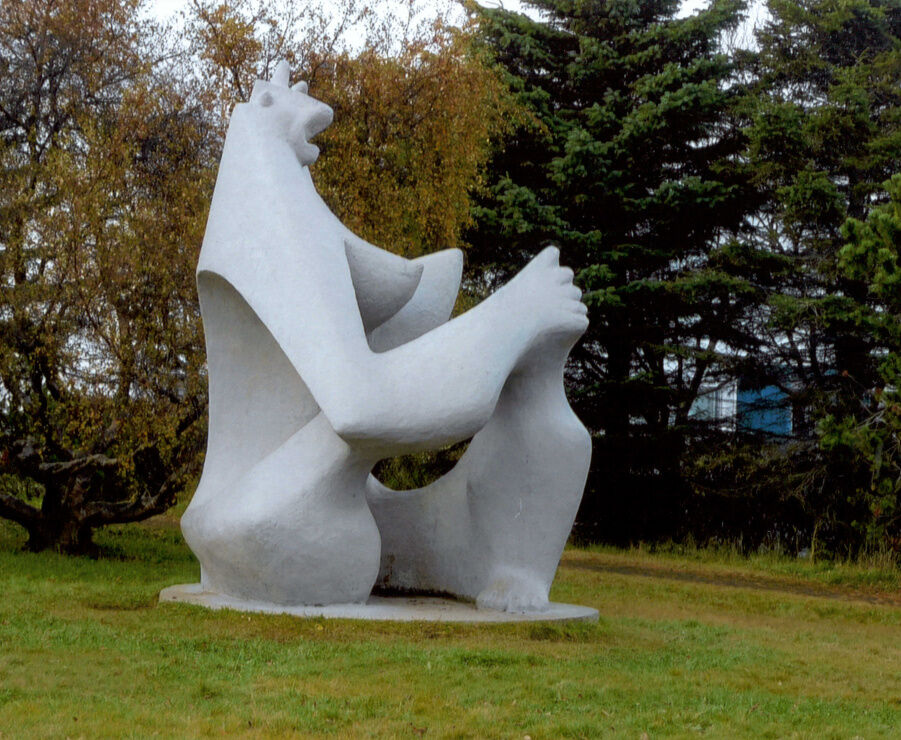 A sculpture in Reykjavik, Iceland, by Asmunder Sveinsson. Bingham photo

Stanley Bingham, all dressed and ready to go explore lava fields on an ATV. Bingham photo

Blue Lagoon — a geothermal spa is supplied by water used by the geothermal power station in the background. It is a man-made lagoon in a lava field. Bingham photo

A sculpture in Reykjavik, Iceland, by Asmunder Sveinsson. Bingham photo

Oct. 12 — After breakfast, we stopped at the town of Grindavik at the Search and Rescue operation there. All of their services are free, including helicopter services if needed, supported by funding by local businesses and patrons. After our briefing, we were outfitted with coveralls and helmet for an ATV tour of the lava fields and coastline on ATVs. Clara chose an ATV near the front of the line, so she wouldn’t have to wait for the “city folk” who were a bit timid driving them. She loved it!

We bore witness to a ship that had run aground, then was broken in half by the never ending surf. The bow section then was carried a quarter mile down the shore, being rolled by the huge waves.

Other Icelandic facts (learned during our bus rides around the island): It’s much easier to begin teaching Icelandic to children than to learn it as an adult; the influx of tourists purchasing wool clothing articles is causing a wool shortage; there is no fee for entering national parks, but people pay for parking; seat belts are mandatory and used in all seats in motor vehicles, including all buses — to which we were constantly reminded, and fences using lava for construction are made with holes to alleviate problems with the wind. The world famous Blue Lagoon, a man-made lagoon, is fed by water output of the nearby geothermal power plant “Svartsengi” and is renewed every two days. Superheated water is vented from the ground near a lava flow and used to run turbines that generate electricity, then after going through the turbines, the steam and hot water passes through a heat exchanger to provide heat for a municipal water heating system. The water is then fed into the world’s largest lagoon for recreational and medicinal users.

The rich mineral content is provided by the underground geological layers and pushed up to the surface by the hot water (at about 170 psi pressure and 464 degrees temperature) used by the plant. Because of its mineral concentration, water cannot be recycled and must be disposed of in the nearby landscape, a permeable lava field that varies in thickness from 20 inches to 3.3 feet. The silicate minerals is the primary cause of the water’s milky blue shade. After the minerals have formed a deposit, the water re-infiltrates the ground, but the deposit renders it impermeable over time, hence the necessity for the plant to continuously dig new ponds in the nearby lava field.

A stop was made at a memorial to General Frank Andrews who served with General Eisenhower in World War II and was one of the founders of United States Army Air Force which later became the United States Air Force. He was killed in an aircraft accident in Iceland in 1943 and is buried in Arlington Cemetery. Andrews Air Force Base, now Joint Base Naval Air Facility Washington, in Maryland is named after him.

After checking in at the Hilton in Reykjavik, we prepared for our final banquet which was the culmination of spending almost two weeks with our traveling friends. Many stairs, trails and various weather experiences (including rainbows) were remembered.

Oct. 13 — After final packing in suitcases that had become smaller and a relaxing breakfast, most of our group was on their way to the airport. Our hotel bus pick-up was scheduled for 2 p.m., so we wandered in the area near the hotel on a beautiful morning. The trip to the airport was about 25 miles where drivers, even in heavy traffic, were very courteous. We’d been through the tiny Keflavik airport some 50 years ago on a fuel stop returning from Greece and naturally found many changes.

Our check-in was at a kiosk where baggage tags and boarding passes were printed and during the entire check-in process, we never dealt with a person. Passage through security control was a different story, which made us feel much better.

Once arriving at the gate in New York, we were told that due to a problem in immigration we would be held on the airplane. Our connection time at Penn Station in New York City was already tight and now was in jeopardy. We’ve been through the process many times in getting from the airport to the train station, so knew how to cut corners. Luckily, we were in the Penn Station terminal with minutes to spare, so caught our train to Albany/Utica with no problems.

Among the questions posed on arrival back from friends is, “Would you live there?” We agreed that it was a nice place to visit, but living there would probably be out of the question.

Editor’s note: Clara and Stanley Bingham of Carthage took a trip to Iceland in October 2018. The Journal & Republican has published a chronicle of their journey. This is the last of an eight part series.