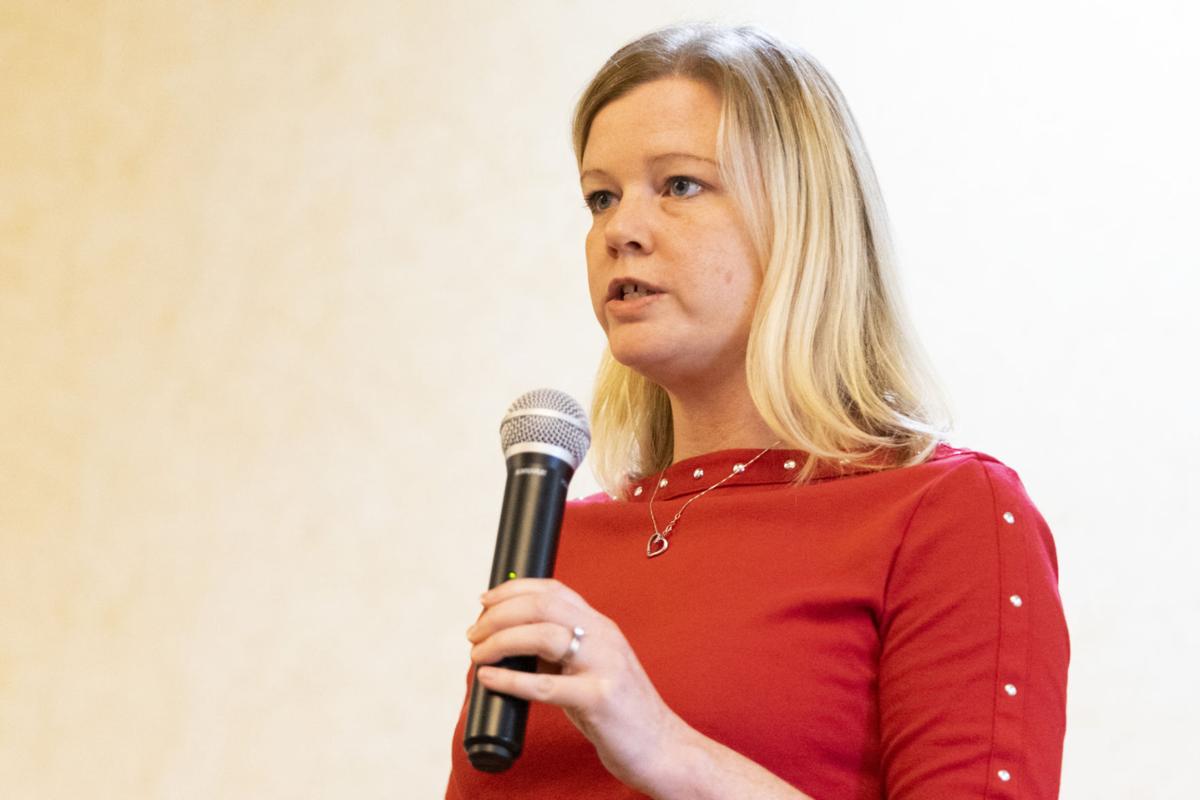 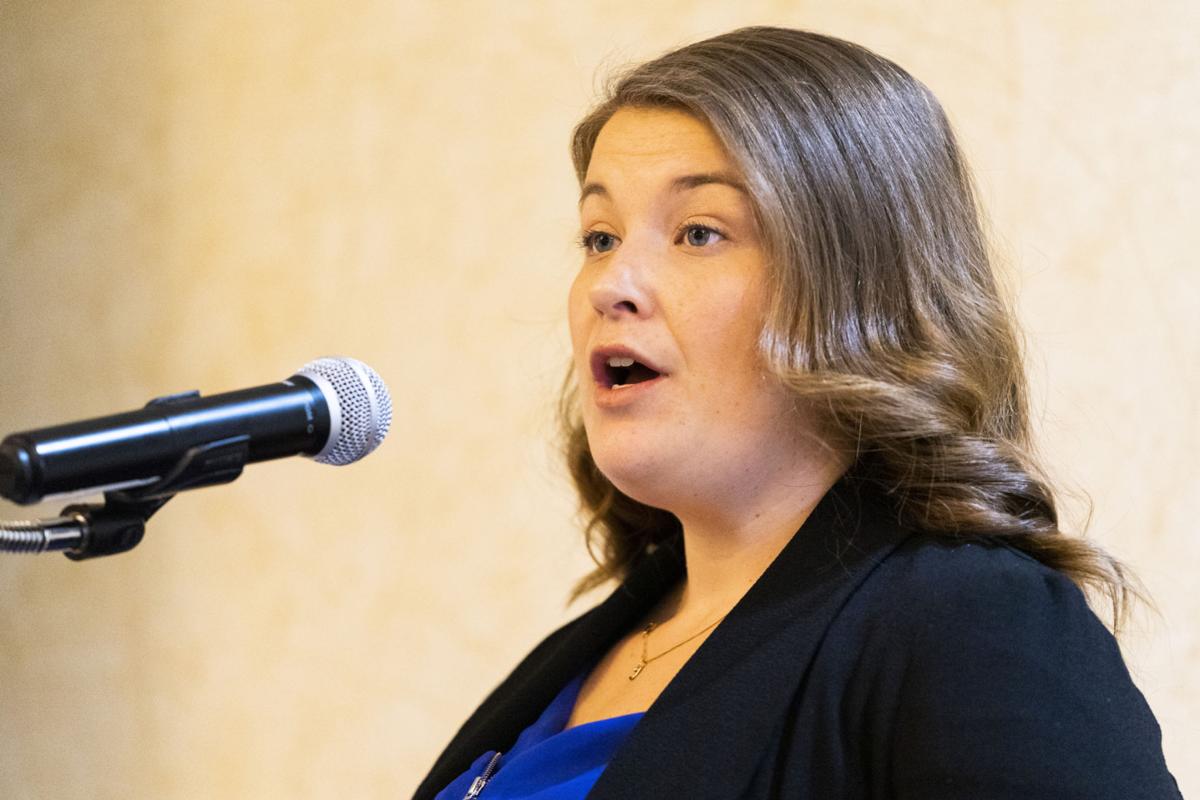 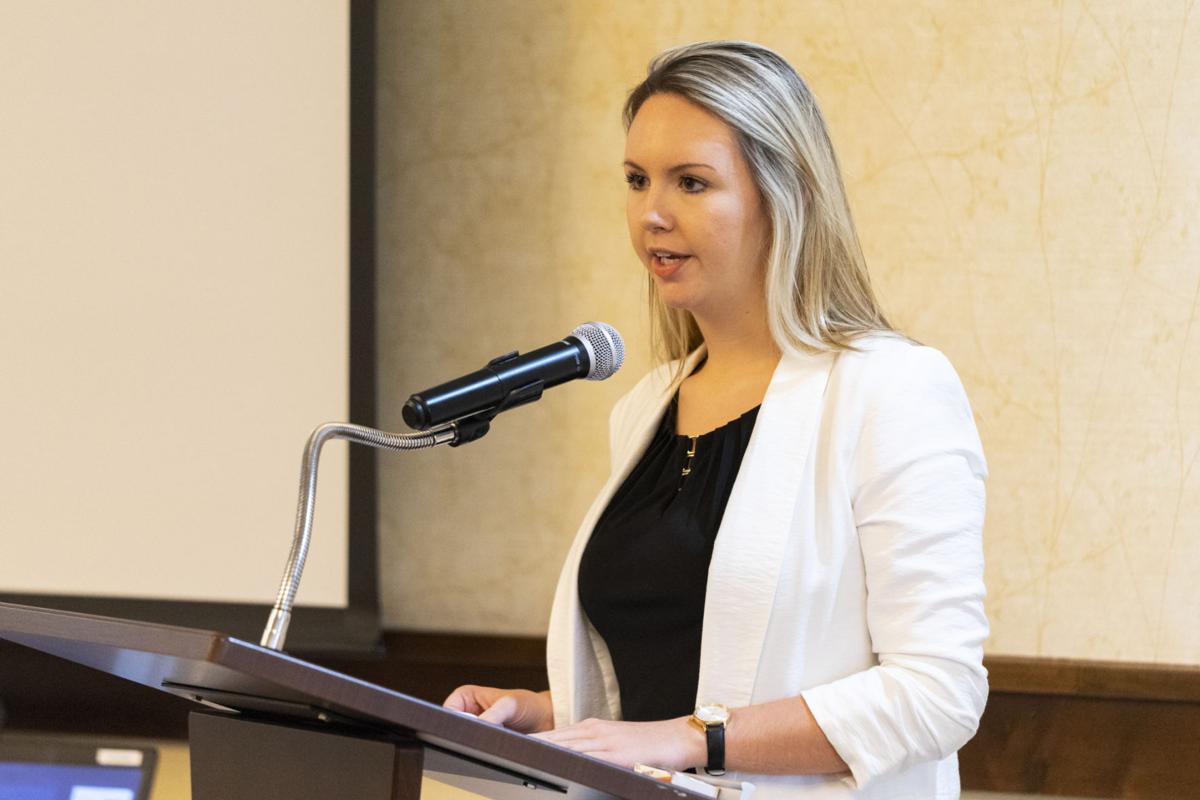 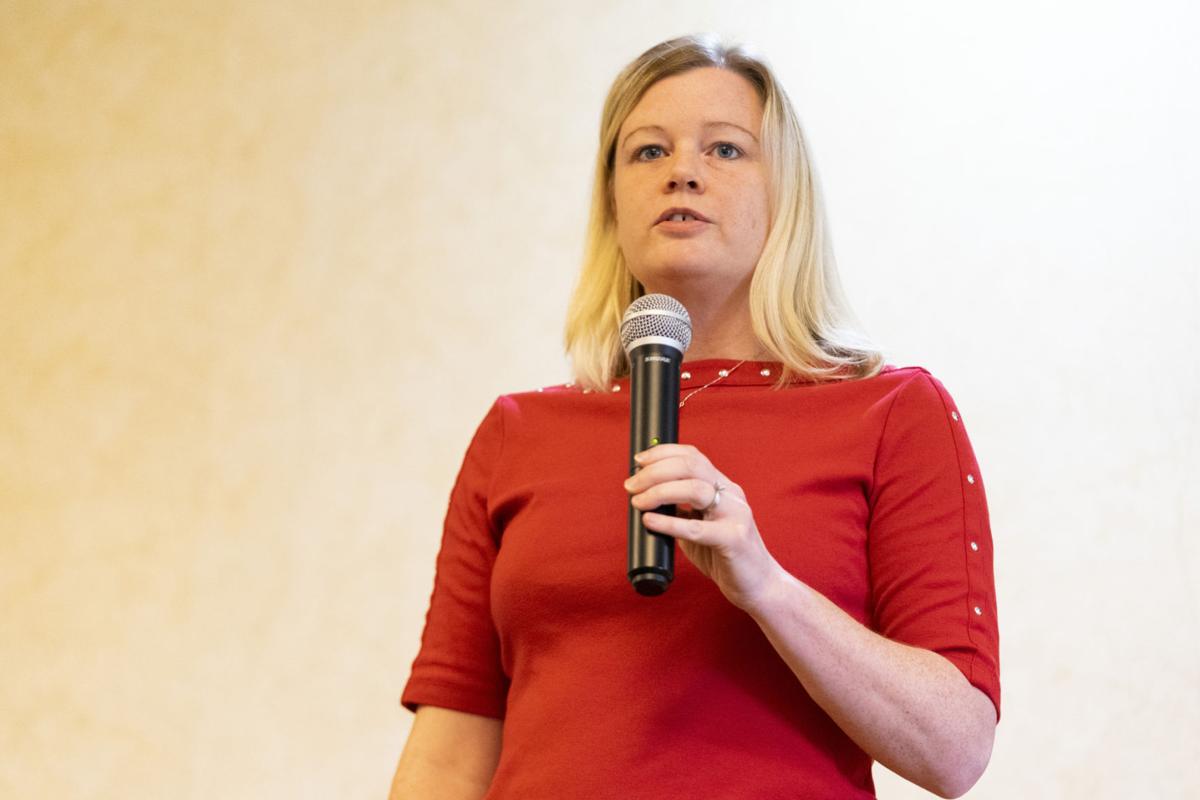 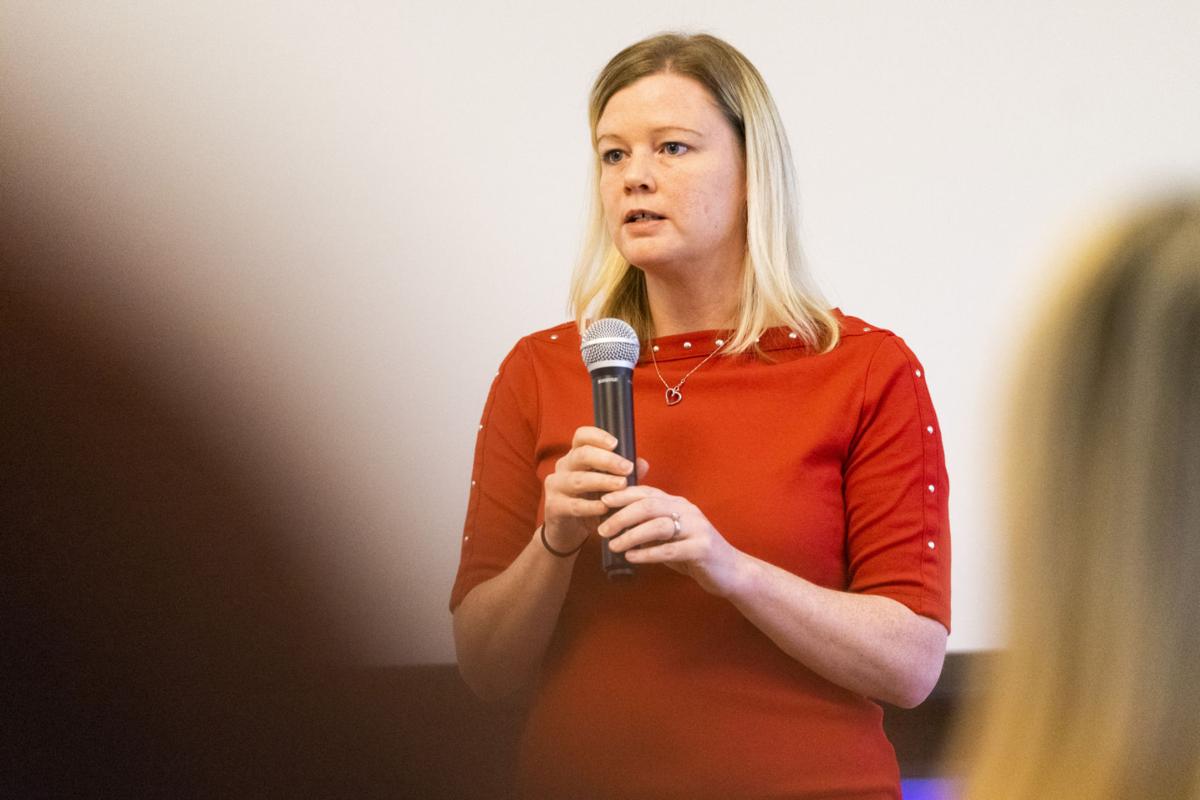 WATERTOWN — During the summer of 1992, while hanging out with her friends at a local mall, the same one she had been visiting with her family for years, Holly Austin Gibbs first made contact with one of the men who would turn her world upside down.

Weeks later, the 14-year-old would find herself miles away from her hometown of Tuckerton, N.J., and thrust into the dark world of child sex trafficking.

Now, 27 years later, Mrs. Gibbs is an advocate working to educate the public about human trafficking and the resources available to aid victims.

On a cold, grey morning, the first snow of the season softly falling outside, health care professionals and community members filled the ballroom of the Hilton Garden Inn in Watertown Thursday to learn about human trafficking and listen as Mrs. Gibbs shared her story.

Mrs. Gibbs, the current director of the Human Trafficking Response Program of California-based Dignity Health, spoke of the traumatic events that occurred during the summer before her freshman year of high school.

The event, which was hosted by the Alliance for Better Communities and the Child Advocacy Center of NNY, was sponsored in part by the Jefferson County District Attorney’s Office, and was free and open for the public to attend. Opening remarks came from Kylie Hilyer of the Child Advocacy Center, Assemblyman Mark Walczyk, who detailed the legislation that has been enacted in Northern New York to combat child sex and labor trafficking, and Cailey Burrows, Miss Heart of New York 2019.

Each guest was encouraged to take handouts with information about human trafficking, which dispelled 10 of the myths associated with human trafficking, such as human trafficking only occurring overseas, or everyone engaging in prostitution is doing so by choice, and dealt with trauma-informed approaches to victim assistance, something Mrs. Gibbs is well versed in after beginning to share her story in 2009.

“For me, sharing my story has been very empowering, it has helped me understand what happened to me and it’s helped me to empower other people,” she said.

As a program director at Dignity, Mrs. Gibbs oversees the efforts to educate health staff about human trafficking and how to assist victims and survivors of any type of abuse, neglect, or violence using a trauma-informed approach. She is also the author of “Walking Prey: How America’s Youth are Vulnerable to Sex Slavery,” which delves deeper into the details of her trafficking.

Through her advocacy work, Mrs. Gibbs has testified in front of Congress and consulted for numerous organizations, including the U.S. Office for Victims of Crime, the National Center for Missing and Exploited Children, the U.S. Department of Health and Human Services, and the AMBER Alert program.

After meeting the man in the mall, Greg, who preyed on her vulnerabilities as a young girl wishing to be seen, Mrs. Gibbs spoke with the man on the phone for about two weeks during the summer before he convinced her to run away with him, using the promise of a glamorous life to lure her away.

“When I was 14 years old, certainly I knew predators, but my idea of a predator was an old man in a white van with candy,” she said. “It was not a young dude at the mall who looks super cool and like a bad boy.”

Taken to a rundown motel just outside of Atlantic City, Mrs. Gibbs was left with a woman named Nikki who dyed her hair, dressed the young girl in her red dress, and put makeup on her face. Then Greg came back, gave her a new name and birth date, and told her she needed to make so much money an hour and so much per night.

It was in that moment she realized they were speaking about prostitution rather than a fun night out at a dance club.

Then he said that he needed to go over the rules with her.

Next, Greg punched a fist into his open palm, all the intimidation Mrs. Gibbs needed to do whatever was asked of her out of fear. Soon after, Nikki put her in a taxi and took her to the big city.

Completely overwhelmed by the lights, the traffic, and the people around her, an old man passed by and smiled at her.

“Nikki asks him if he wants to date me and he asks how much, and they haggle on a price,” she said. “I think they landed on $300, and then I’m in this glamorous casino hotel room.”

This kind of thing went on for two nights. Though it may not seem like a very long time, those two nights affected the rest of her life.

The second night she was arrested by law enforcement on Pacific Avenue.

“Nikki and Greg tried to make me feel good about what I was doing, whereas the officer now made me feel like I didn’t even belong in normal society anymore, like I was fundamentally damaged,” she said. “I wanted nothing more than to get back to Greg and Nikki where I felt safer than in that police car.”

Between the three agencies involved with her case, she had at least six male officers interviewing her in a way that felt like she had done something wrong, she said, like she was the offender.

“Yeah, I chose to run away, but not to become a prostitute,” she said. “And really, even if I did make that choice at 14, how much of a choice is that? How informed am I, how equipped am I to make that decision on my own?”

In the end, all three people involved in her trafficking were caught and convicted, though Greg was only sentenced to one year in prison and five years of probation.

Upon her return home, Mrs. Gibbs struggled with feelings of isolation and depression, and even attempted suicide at one point. She said she felt so demonized for what had happened to her she made the decision to run away to Atlantic City once more of her own accord, this time bringing another young girl with her.

Following her second arrest, she battled depression for years before she started to come to terms with what had happened to her when she was a teenager.

Now, at the age of 41, Mrs. Gibbs is married and living on the West Coast, warning others how easy it is to fall victim to traffickers, especially in this technologically driven age.

With the internet, a child can cross paths with a predator of any kind, including a sex trafficker, much more easily than in 1992, never even having to leave their home.

Due to her experiences with law enforcement, health care professionals, and the citizens of her hometown the summer she was trafficked, she takes extra care to stress to people the importance of trauma-informed approaches when dealing with victims.

Her message to those who are not in the medical or law enforcement fields was simple: they can make just as big of a difference in their own way.

The National Human Trafficking hotline has found that human trafficking has been reported in all 50 states, as well as Washington, D.C. If you think you have seen a potential trafficking victim, Mrs. Gibbs stressed the importance of not trying to intervene in case it makes the situation more dangerous, and instead suggested that people make use of the following resources:

“The main thing at this point is I hope people walk away feeling educated and empowered to take action, even if it’s being watchful of their surroundings and knowing who to contact if they see something suspicious,” she said.

Children are raised to be passive fools because it makes it easier for parents to manage them. But it also makes them vulnerable to many other forms of recruitment, ranging from sex trafficking to religious cults. Throughout human evolution it was normal for young people to leave home and identify with an exciting new tribe, but in the modern context these tendencies are maladaptive and need to be consciously compensated for. Everyone needs to be taught independent thought and self agency. And if you see that as problematic you might want to examine what cult you're in yourself. Also as a society we need to stop normalizing selfish hedonism. Sure, pleasure dictated consumption makes for a booming economy, but so does forethought dictated investment. And sure oppressive cultures (like philosophical fascism) also ask for identification with purpose beyond what is immediately satisfying, but that's not what makes them oppressive, it's just what makes them cohesive and doing the opposite just to be opposite is a gullible move. Not to excuse evil and blame the victim, but please stop raising fools. You victimize them when you raise them fools and then they get victimized again. People should think for themselves for a larger purpose.