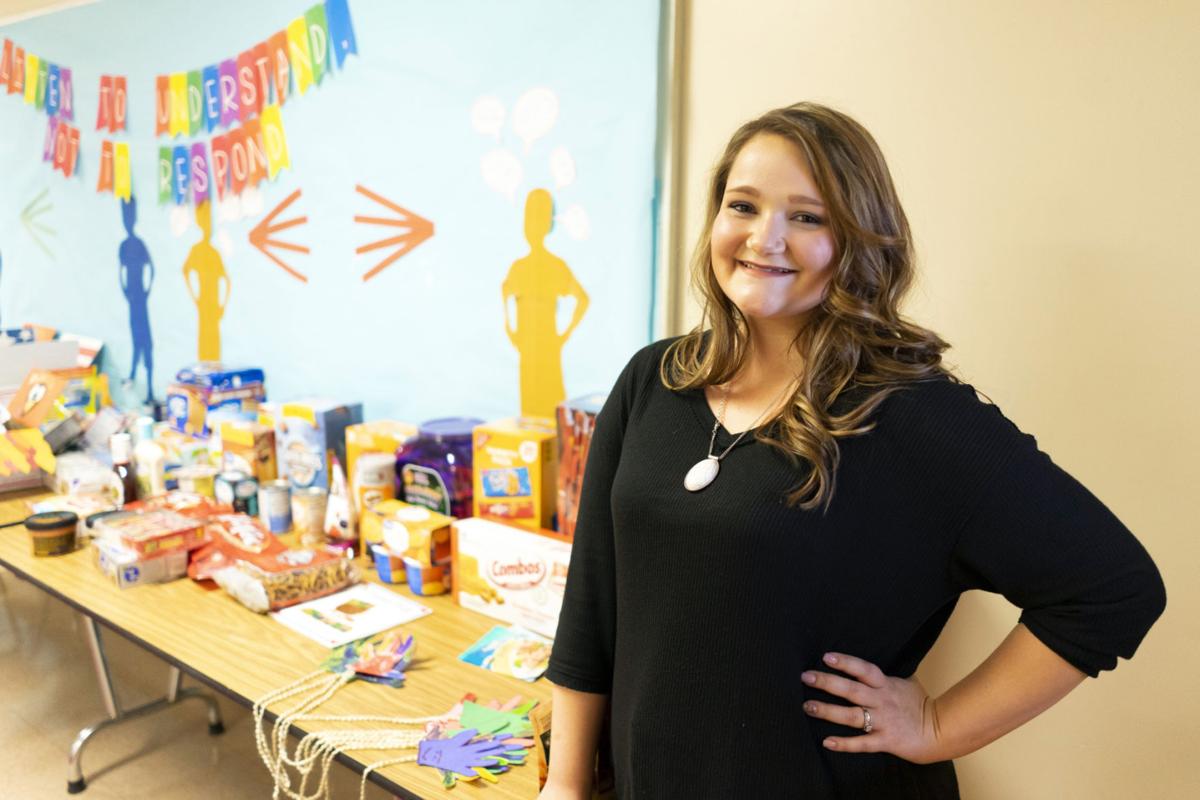 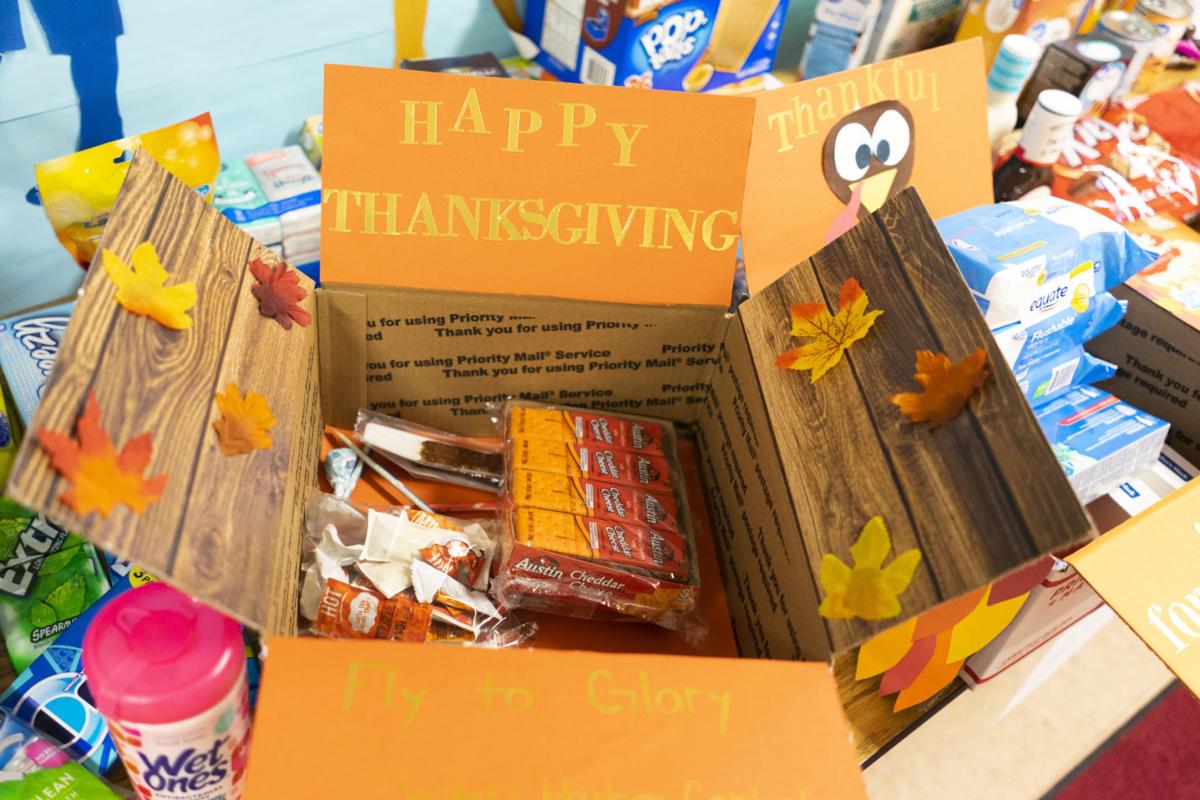 Each care package gets a festive interior before it is packed with snacks and supplies. Julia Hopkins/Watertown Daily Times 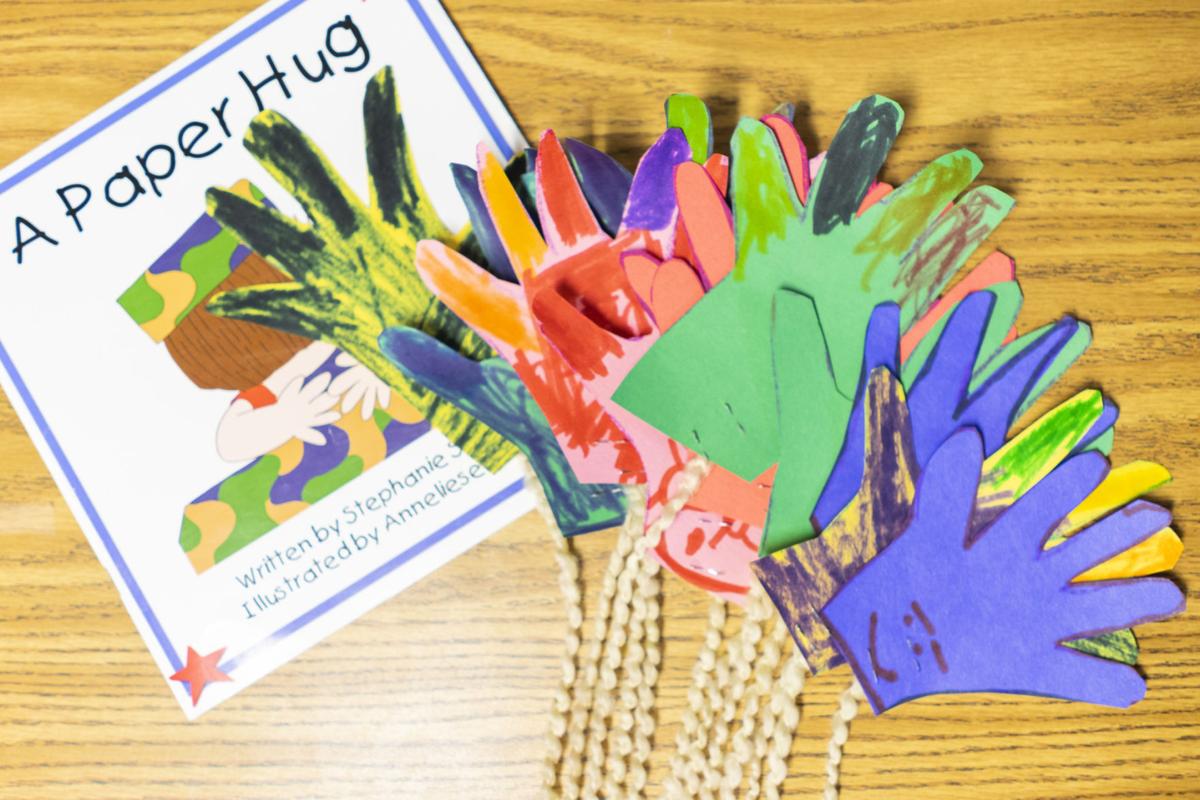 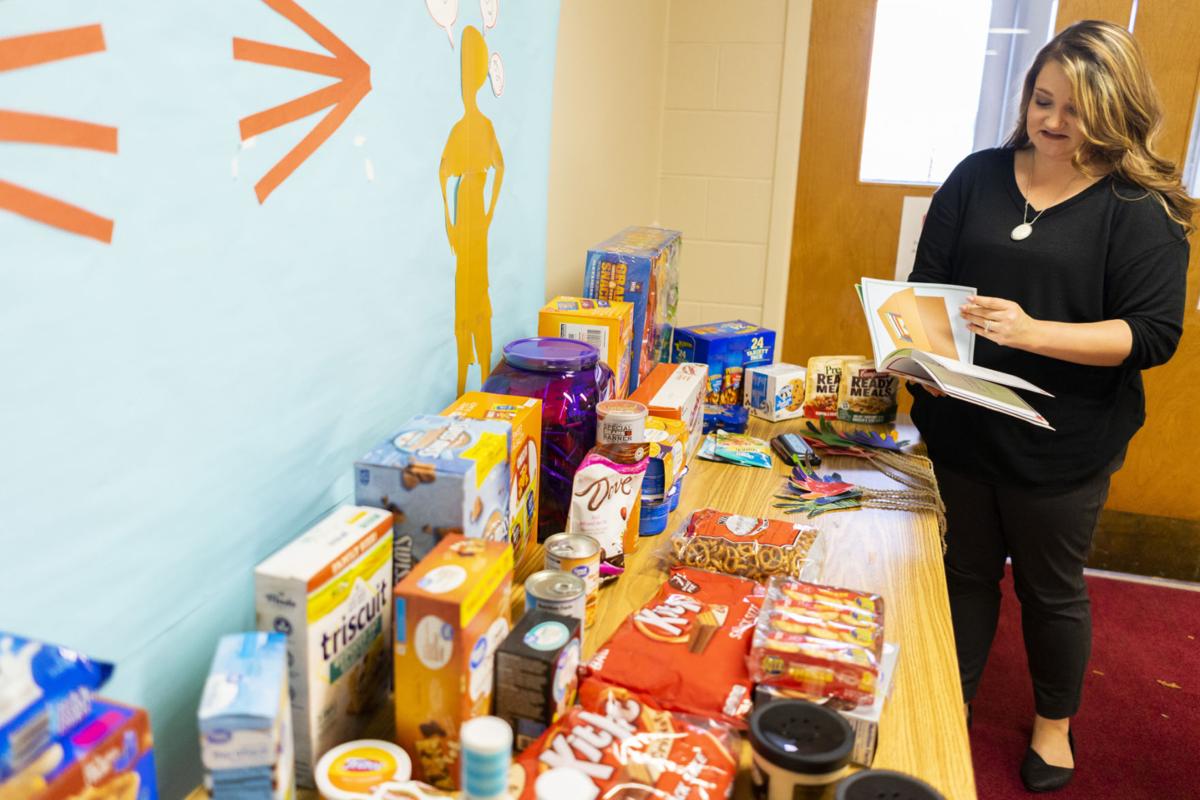 Kassi Horton flips through the book “A Paper Hug” which will be accompanied by paper hug creations from the students of Sackets Harbor Central School in the care packages being sent out on Thursday. Julia Hopkins/Watertown Daily Times 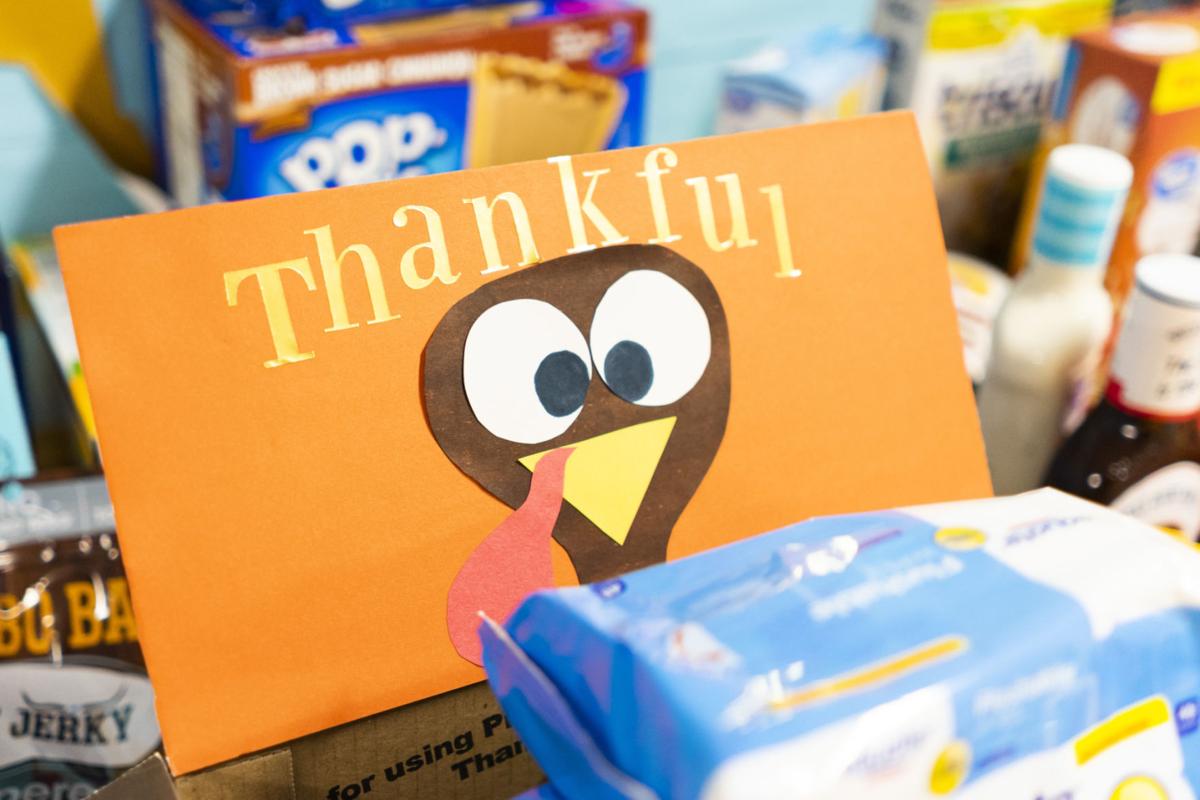 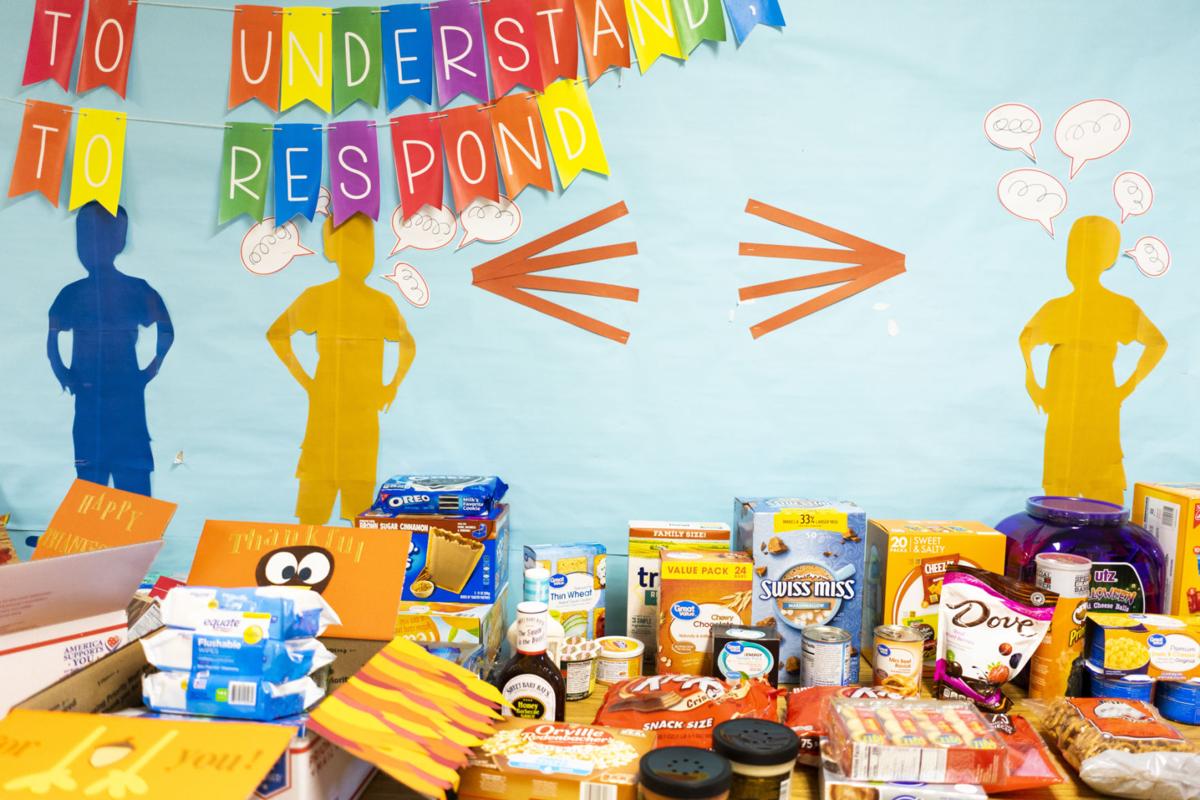 Each care package gets a festive interior before it is packed with snacks and supplies. Julia Hopkins/Watertown Daily Times

Kassi Horton flips through the book “A Paper Hug” which will be accompanied by paper hug creations from the students of Sackets Harbor Central School in the care packages being sent out on Thursday. Julia Hopkins/Watertown Daily Times

A few years prior, Mrs. Horton’s husband, Shaun, joined the Army as part of the Apache Unit, the aviation unit for Apache helicopters, in Alpha Company.

Although he has been deployed once before, to Iraq, he is currently stationed in Afghanistan with the 10th Combat Aviation Brigade, 10th Mountain Division (Light Infantry) that shipped out earlier this fall and will be gone for roughly nine months in support of Operation Freedom Sentinel, missing spending the holiday season with their loved ones.

During her husband’s last deployment, Mrs. Horton sent him care packages, along with other family members, and heard that many in his unit didn’t receive anything.

This time, though all packages will be addressed to Shaun, the boxes and their contents are for all the CAB soldiers in Afghanistan to share.

“The soldiers give up so much and not only them, but their families give up so much to go wherever they are, so even the smallest thing like buying a box of cookies and sending it — you have no idea what that means if they’re having chicken and rice every day,” she said. “Especially when Thanksgiving comes along and then they’re not with their families, at least they can have a little something.”

A pre-kindergarten teacher at Sackets Harbor Central School, Mrs. Horton is in her second year of teaching at the school, and has been seeking donations for the past few weeks for her care packages, setting up boxes in break rooms and sending an email to the staff.

Not only did Mrs. Horton take the time to gather supplies, set the boxes up for donations, and send out a round of emails, she also put the time and effort into decorating each and every box.

“The first one I did was the turkey one, which took a long time to decorate, but it made me feel more connected to them in a way because this is going to them and instead of just a plain box at least they know that I’m taking the time and I care,” she said.

With a table set up in the elementary wing of the school, the boxes, each decorated in a festive manner, are filled with things like non-perishable snacks and personal care supplies, as well as paper hugs from young students. Inspired by the children’s book “A Paper Hug” by Stephanie Skolmoski, the hugs are the decorated paper handprints of the kids, held together with strings the length of their arm spans in order to send long distance hugs to the soldiers.

The boxes, some of which feature messages like “Thankful for you” and “Fly to glory,” were sent out earlier this week, and will most likely reach the troops a few weeks from now. Mrs. Horton sent about 10 boxes, and the shipping costs — around $18 per box — were covered by the unit’s Family Readiness Group. Among other functions, FRGs act as a support and communication bridge between the command and the families of deployed units.

Thanks to the support the Sackets community has shown through this round of care packages, Mrs. Horton said she will most likely do another round of boxes in December with a Christmas theme aimed at bringing the soldiers some holiday cheer.

“I want to make sure they know that it’s from Sackets because there are a lot of military families in Sackets, even in my classroom I have five,” Mrs. Horton said. “I just want them to know the community is rallying around them and is thinking of them, and they know that they’re not alone.”