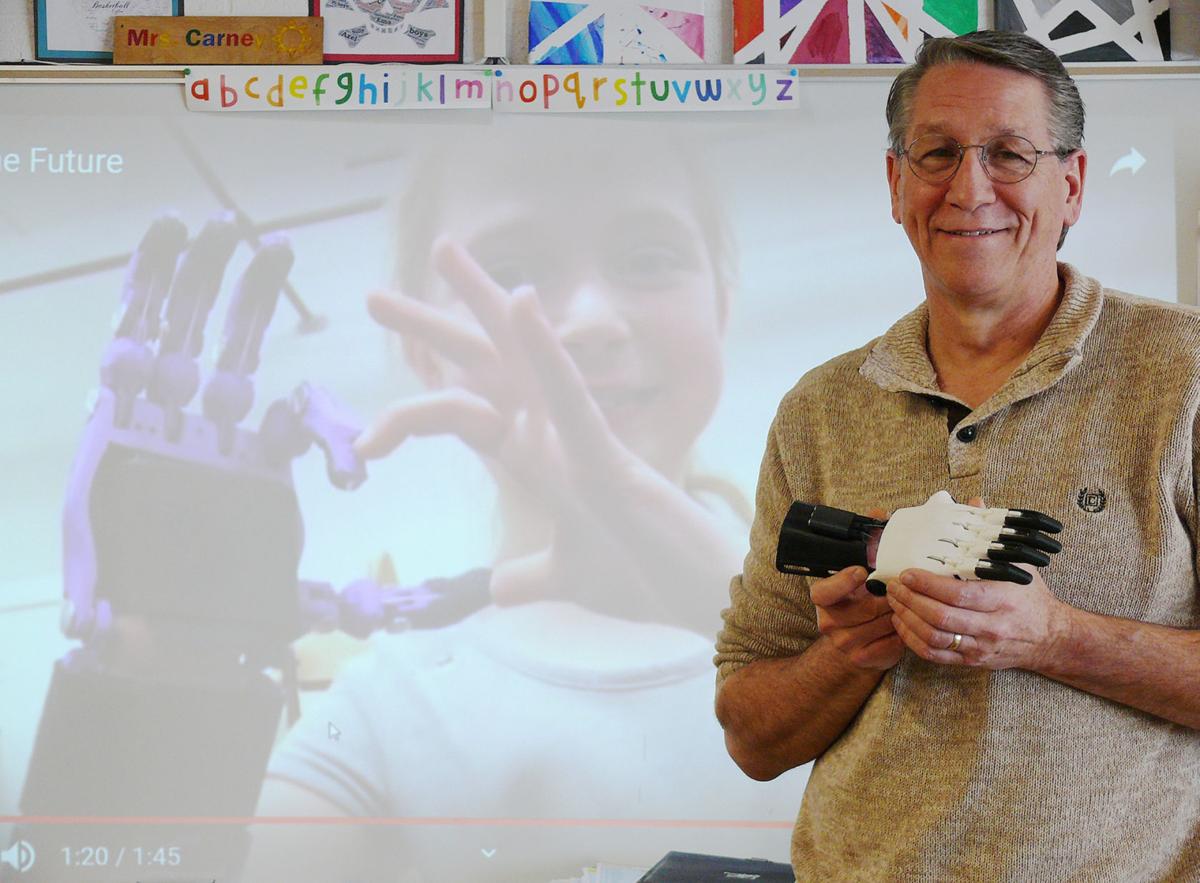 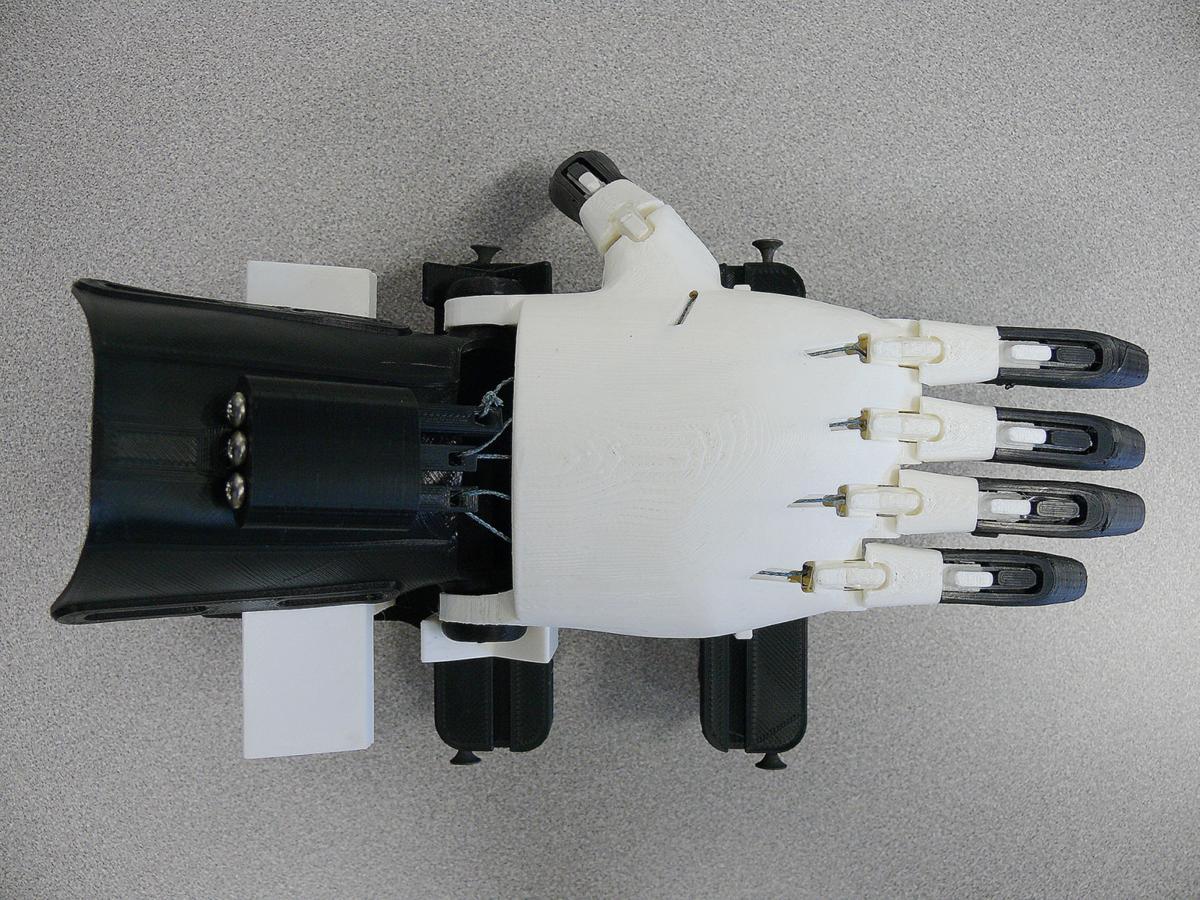 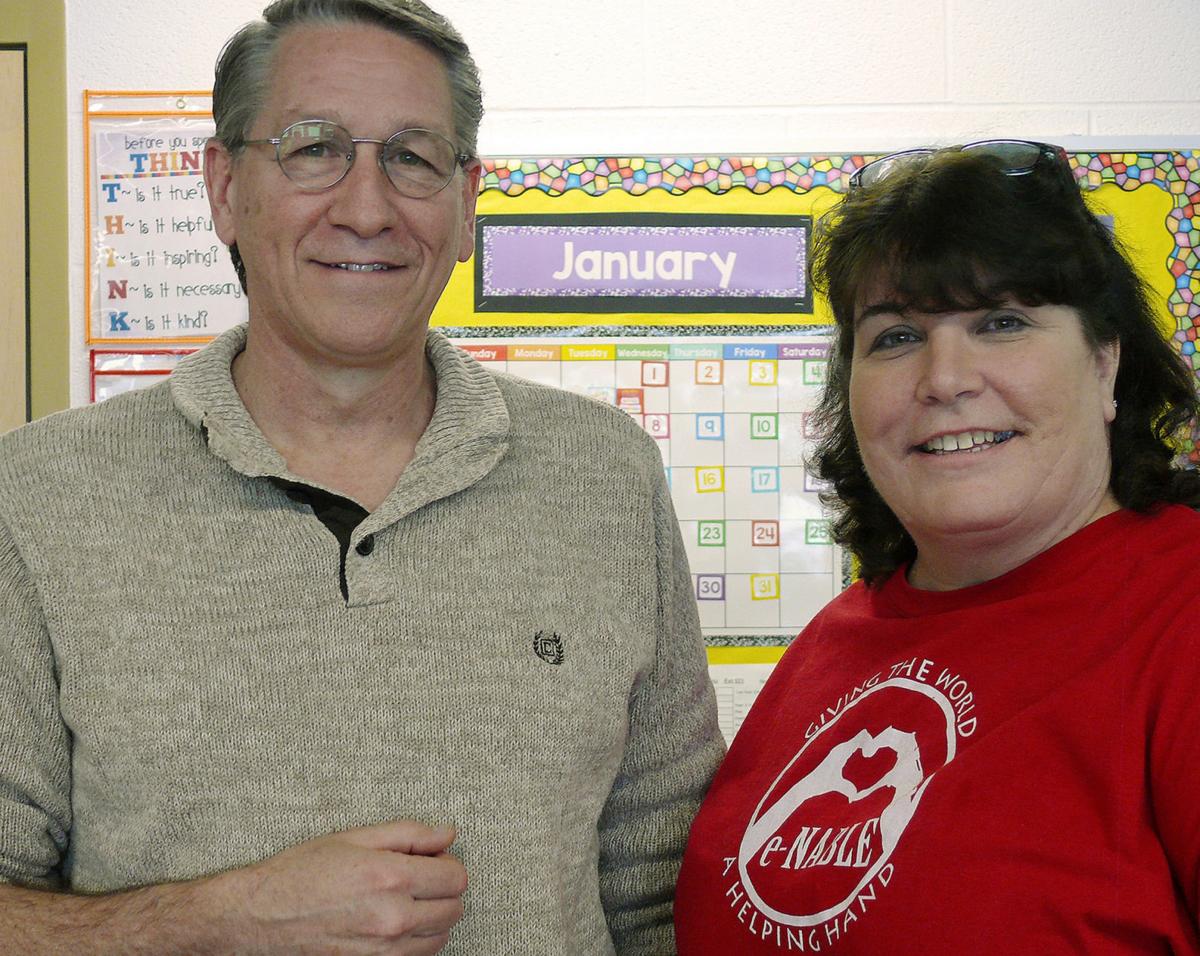 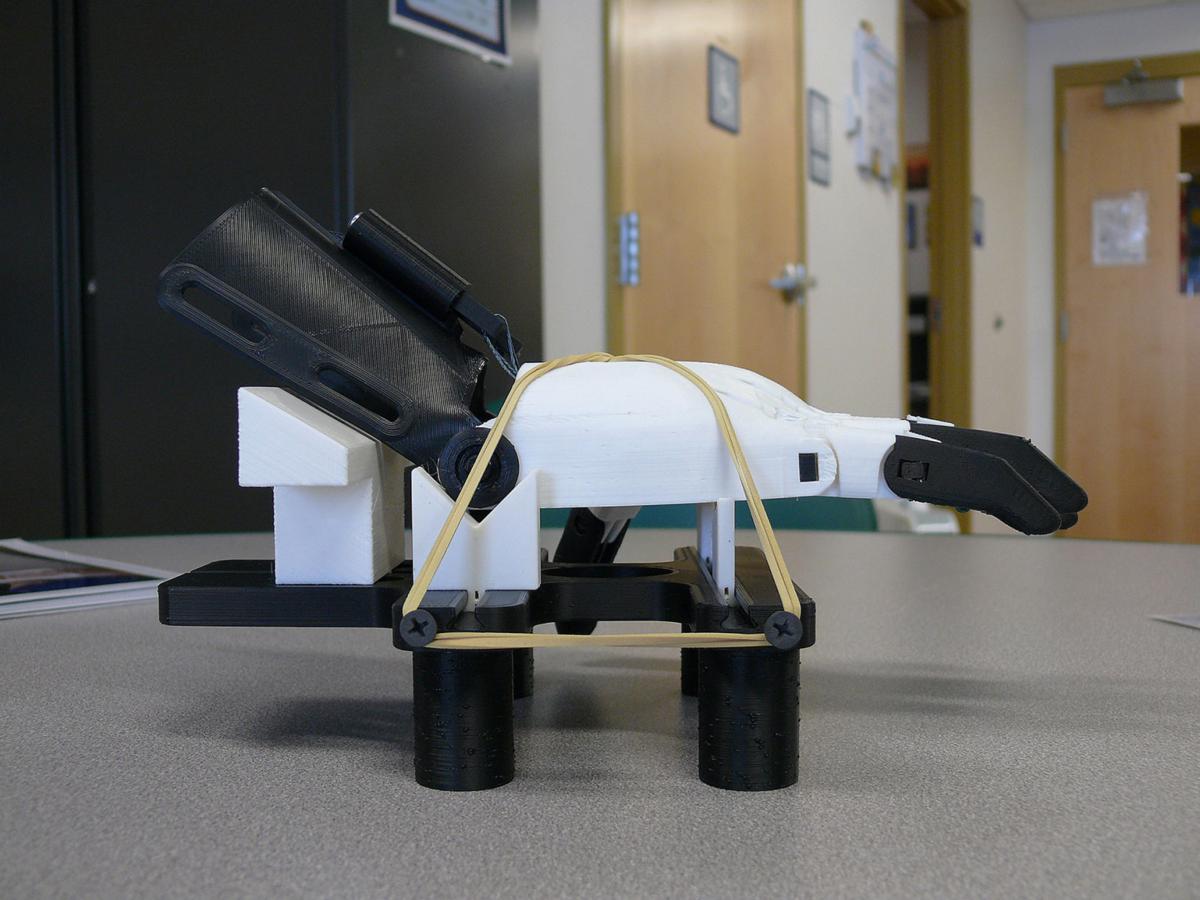 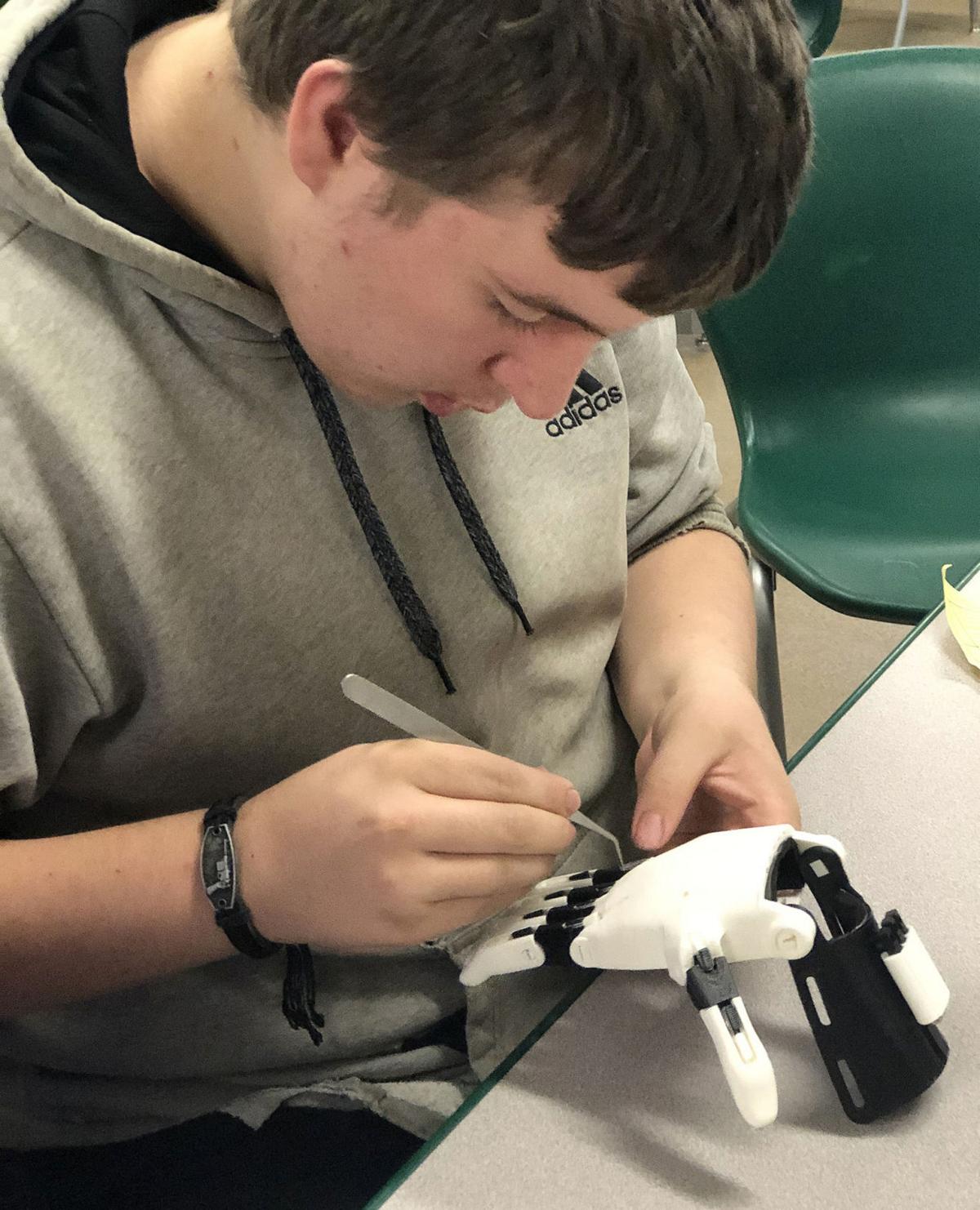 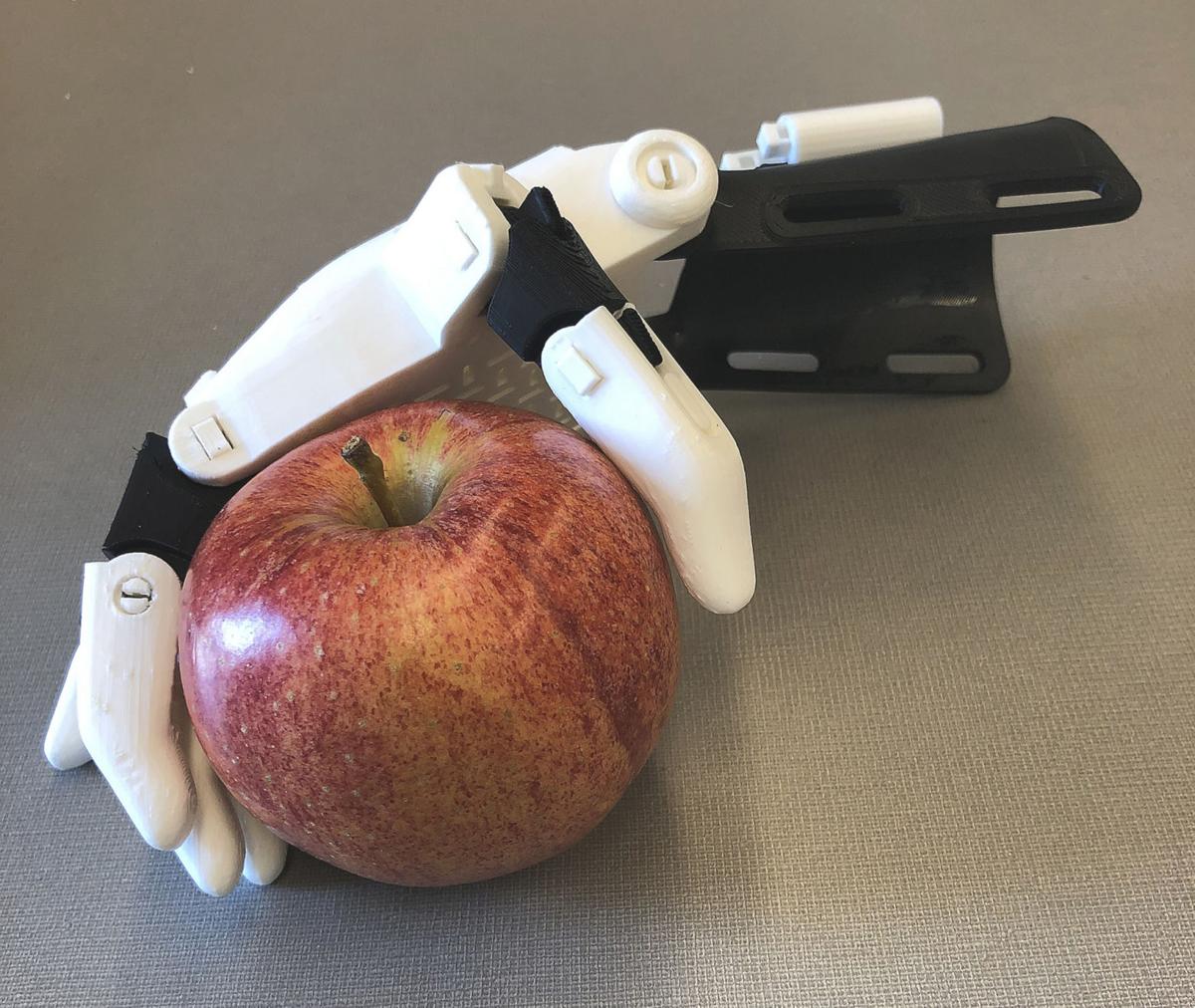 MEXICO – The hand of God to the hand of Adam, from the hand of Michelangelo to the ceiling of the Sistine Chapel, has served as Western civilization’s greatest symbol of creation, love, sharing, and inspiration for over 500 years. Nowhere is its message more poignant than in the work of a small group of students and teachers here on the CiTi BOCES campus where they make hands for those who don’t have them.

“We’re all about wanting to do good,” said Tracy Fleming, former Director of Technology at CiTi (the Center for Instruction, Technology, and Innovation). But they haven’t done it alone, and that’s, perhaps, thanks to Fleming and “this gadgeteering mindset” he’s had “since I was in high school.”

About five years ago, intrigued by the then relatively-new technology of 3D printing, Fleming, along with three others from CiTi BOCES, traveled to Genesee Valley BOCES in Batavia to learn about this game-changing marvel.

“And we learned about it,” said Fleming, “by building a 3D printer” which they were able to bring back to CiTi. “And that is what got me hooked on 3D printing.”

And so, it was off to the races for Fleming, already well-versed in CAD, the computer drawing program that drives a 3D printer. He began to print all sorts of things. But he didn’t print hands. Those weren’t really in his plans just yet. But like a student searching for inspiration, he only needed the right teacher. And that teacher was Professor Jon Schull of the Rochester Institute of Technology.

There, about three years ago, at an RIT Maker Fair for 3D printing enthusiasts, Fleming was introduced to Schull’s e-NABLE group, a chapter among many of a world-wide charity that 3D prints hands and upper arms for those who need them but can’t afford expensive medical prosthetics.

And the light bulb went on, and Fleming was a changed man.

“If you have a creative mind, 3D printers can be applied to almost anything,” Fleming said. “But to find this group here was the first time I was able to apply it to something that was really meaningful.”

He brought the e-NABLE idea back to CiTi and found the Oswego BOCES Teachers’ Association also interested in the idea. Together they formed the 140th chapter of this global community of “teachers, students, engineers, scientists, medical professionals, tinkerers, designers, parents, children, Scout troops, artists, philanthropists, dreamers, coders, makers, occupational and physical therapists, and everyday people who just want to make a difference,” as Jen Owen, one of e-NABLE’s founding forces, put it.

And so, a hand first made of whalebone and metal pulleys by an Australian dental surgeon in 1845 for a military victim of a gunpowder accident, became the model for e-NABLE’s first artificial hands. Prior to the advent of 3D printing, those hands didn’t look much different than they did back then. And yet, that 167-year-old contraption became the building block of every e-NABLE hand since.

Making hands for those who need them is certainly a big deal, and it takes a lot of work, and a lot of training, and a lot of practice, to be allowed to do so as an e-NABLE member. And CiTi’s e-NABLE chapter of students and teachers has done that, making a 3D printed hand for a young man in the Dominican Republic who lost his hand in an accident. It was completed in late 2019 and will be given to the young man by a group of Portland, Maine Rotarians who visit the Dominican Republic every year helping those in need.

But for Tracy Fleming, the story doesn’t end there. It’s only just beginning. As Jen Owen has said, “While many see e-NABLE as a group of individuals who are using their resources and talents to make a difference with new technologies, it is important that people are reminded that e-NABLE isn’t about 3D printed hands. e-NABLE is about being kind to others and doing what you can, with what you have, where you are…to make a difference.”

And that is where Fleming’s focus is today.

“e-NABLE right now is looking to branch out beyond just the prosthetics to use that global community to give a platform for clinicians, teachers, people who need devices, to get into assistive technology,” Fleming said.

“We’re looking at building that as another element to our e-NABLE group here. So, we’re looking at opening the door to go beyond just doing the hands.”

Part of the reason for that search for something new is actually the success of the worldwide hand-building project. The response to the need for hands has met the need.

“We’ve only found this one opportunity to work on a hand for an actual person,” said Fleming.

According to Jen Owen, “As of Nov. 2019, nearly seven years after the first device was created out of metal and scrap materials, there have been approximately 7,000 3D printed hands and arms created and gifted to children and adults in need in over 100 countries around the world. There are an estimated 30,000 e-NABLE volunteers (including students and teachers) who are helping to make a difference in their local communities, clinics and schools all across the globe.”

Of course, there is still more to be done in providing even better hands to those in need. In that regard, e-NABLE is starting to get into the production of motorized hands.

And Fleming’s working on developing a hand for people who have a hand but have no control over it, such as stroke victims. It will “give them the ability to grip and grasp with that hand based on movement of their wrist and arm.” Though different in many ways from the hands they make now for people without hands, they are similar in that those too are driven by the force of the wrist.

He’s also working with a stroke victim who can close his hand but can’t open it.

“Almost every individual’s need is very unique,” he said.

But still, these are not to be confused with medical prosthetics that can cost tens of thousands of dollars.

The hand CiTi produced for the young man from the Dominican Republic “costs about 20 bucks,” said Lisa Carney, a special education teacher at CiTi and an active participant in the e-NABLE group. The low cost makes obtaining a new, larger one possible as the recipient grows.

“This is democratization of prosthetics,” said Fleming.

And it’s not just for people. e-NABLE Oswego County (the official name of the CiTi group) is also looking into helping animals.

According to Fleming, two area veterinarians are open to their group designing post-surgical splints for animals. There are commercial splints available, he said, “but when you can’t afford that, people resort to things like bending coat hanger wire in loops and taping that to an animal. We can do better than that. We know we can help in those areas, and we’d like to try to do that. And I’ve got students who are interested, very much interested, in that as well. So, this is all about us trying to reach out to help.

“All this stuff is being done,” he continued, “but I haven’t seen it being done here. So, if we have the ability, the interest, and the individuals that would like to participate, I almost feel compelled, like we don’t have a choice, we have to kind of do that here. There’s a need here, and there’s a potential solution.”

“There is no cost to CiTi,” for all this, Fleming said “We’ve crowdfunded. We have a GoFundMe campaign at: www.gofundme.com/f/CiTiTeachersAssociationE-NABLE “That’s how we pay for everything,” said Carney, whose involvement, along with that of other CiTi staff such as teachers’ union co-president and history teacher Barb Kickbush, has been crucial to expanding the whole point of this 3D printing endeavor. It’s not just about hands. And Fleming is the first to agree that as important as providing “prosthetic alternatives” is, there’s something even bigger going on here. And that’s that this is a school, and from a teacher’s viewpoint, this is about education. This is about students.

“Everything about this is a teachable moment for that kid that needs to be inspired, that our regular curriculum isn’t meeting,” said Fleming. “So, the maker side of this is not insignificant. My passion is driven by how many people can we get to collectively work together and collaborate in a positive endeavor. I’ve never seen one argument. They’re just engaged. They are not arguing. They are not fighting.”

“Every single thing we do,” said Fleming, “is another opportunity to engage these kids and make them think about here’s a place to apply that stuff you would never think you would ever care about. There are many, many students in lots of different, hidden, little sectors of our educational system who are inclined toward this sort of learning, this sort of activity.”

And it is all carefully led by teachers such as Lisa Carney. She’s involved her special education algebra students in the hand-making project.

“The students are now starting to get involved with the 3D printing as well,” said Fleming.

“3D printing hooks every kid,” said Carney. “It just adds that real cool factor that helps them learn. I love that we’ve been able to catch the minds of the kids. And it’s for anybody who wants to do it. It’s not just the smart kids, it’s not just the engineering ones that could do it on the computer, it’s for everybody. It’s for everybody to learn and everybody to help other people, and that’s just phenomenal.”

“It’s all a sliding scale of learning for all our kids,” said Fleming, “even the ones that are only learning how to be empathetic. That is not unimportant.” Michelangelo’s symbolic image of God reaching out to Adam, to spark him to life, sends out as powerful a message today as it did to the men and women of the Renaissance.

“The opportunity to reach marginalized kids is so powerful to me. It just makes me feel so good,” said Fleming, “and we’re just getting started.”