A drawing documents the situations and landscapes during the second battle of Sackets Harbor. Courtesy C. Barone 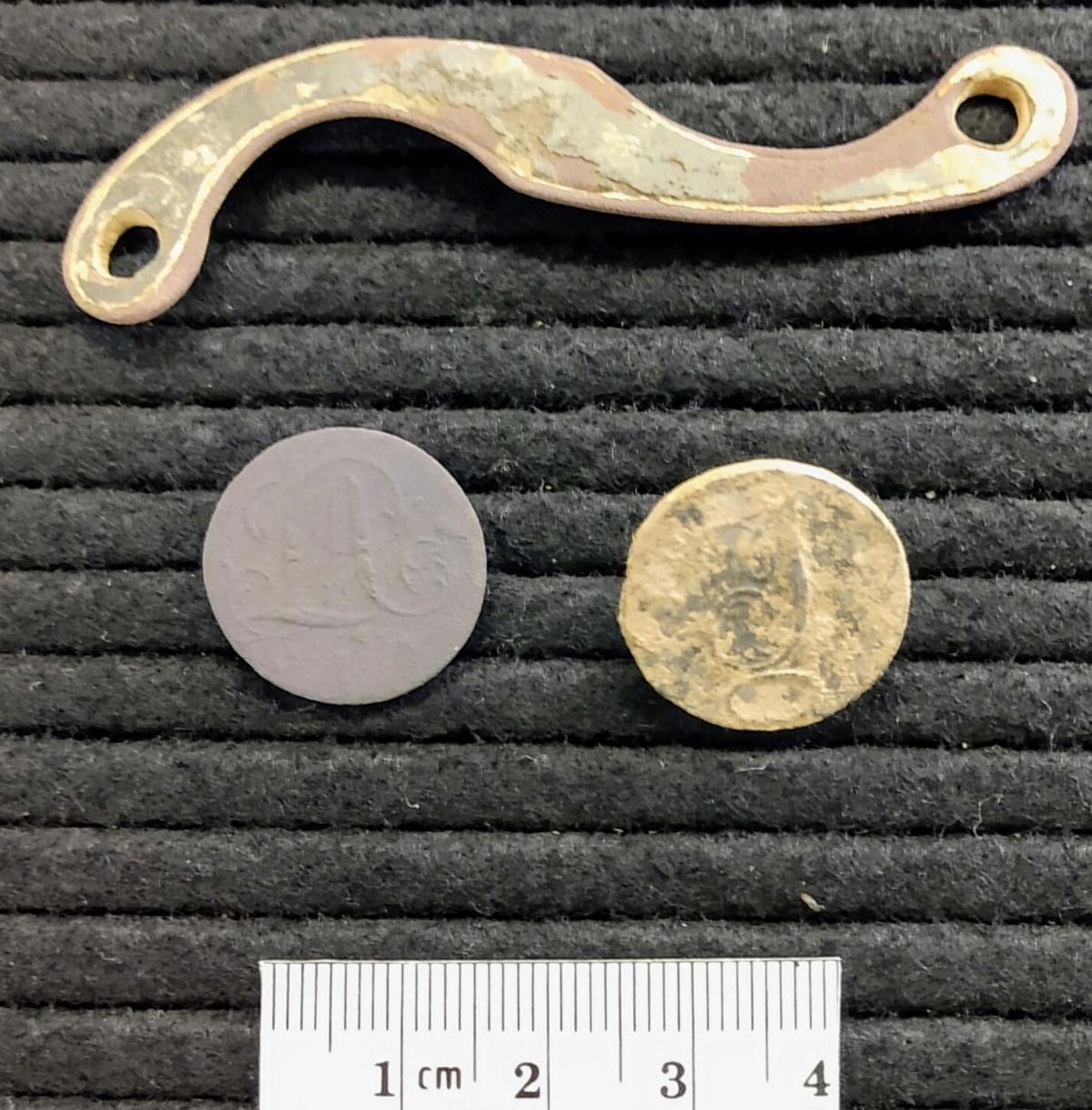 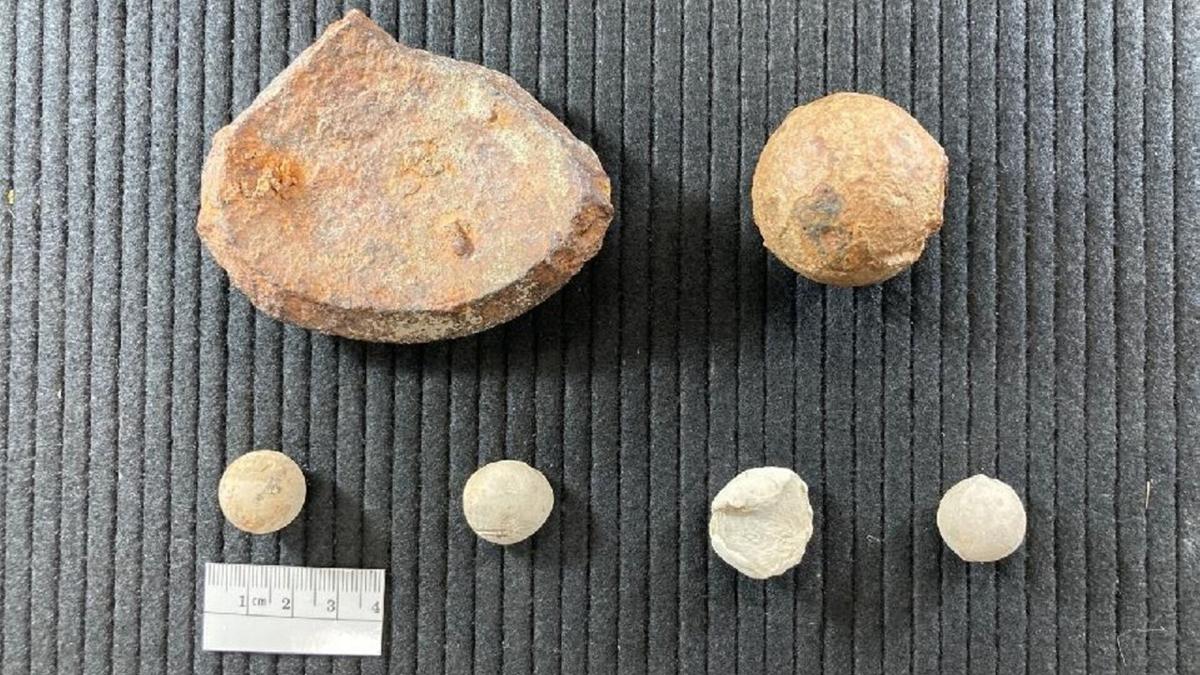 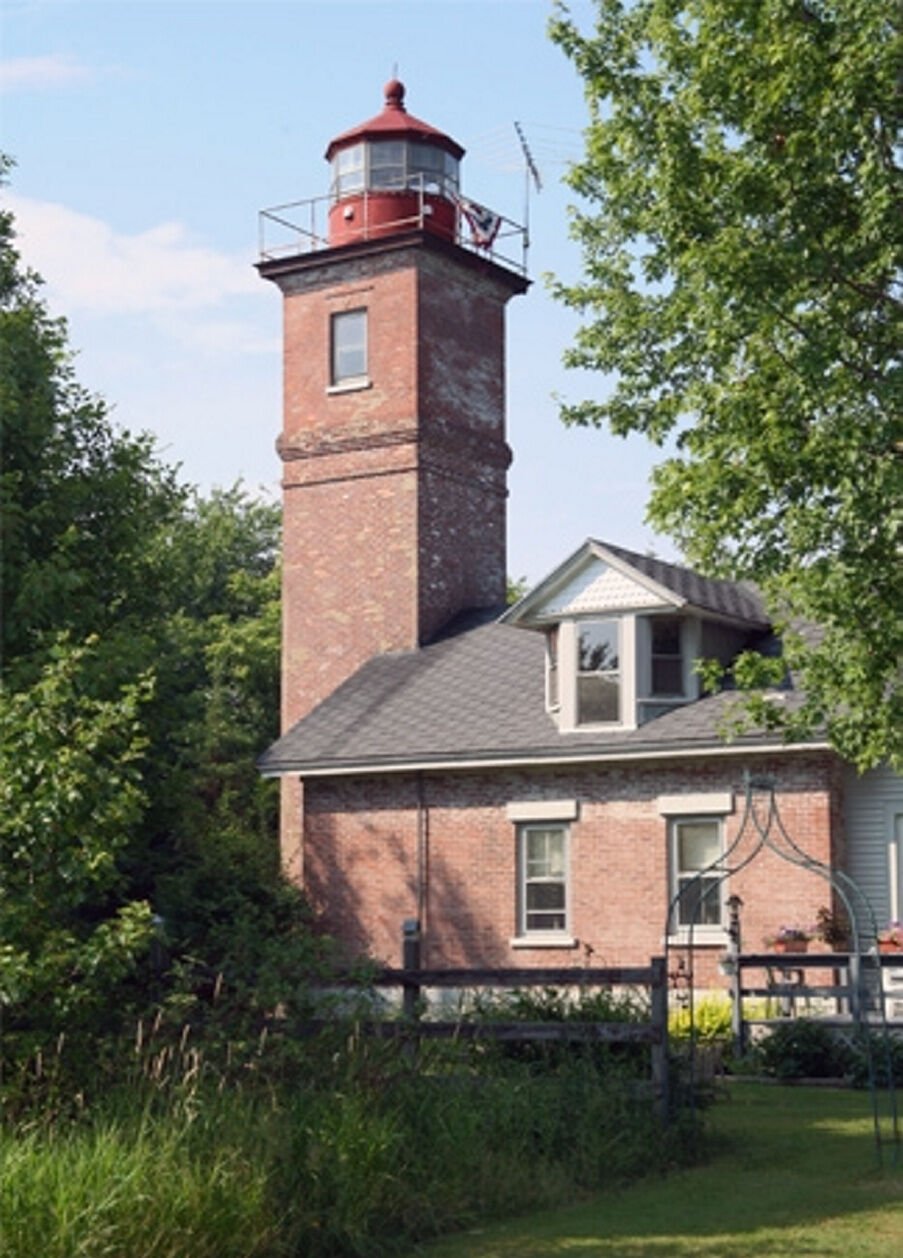 The lighthouse on Horse Island. lighthousefriends.com 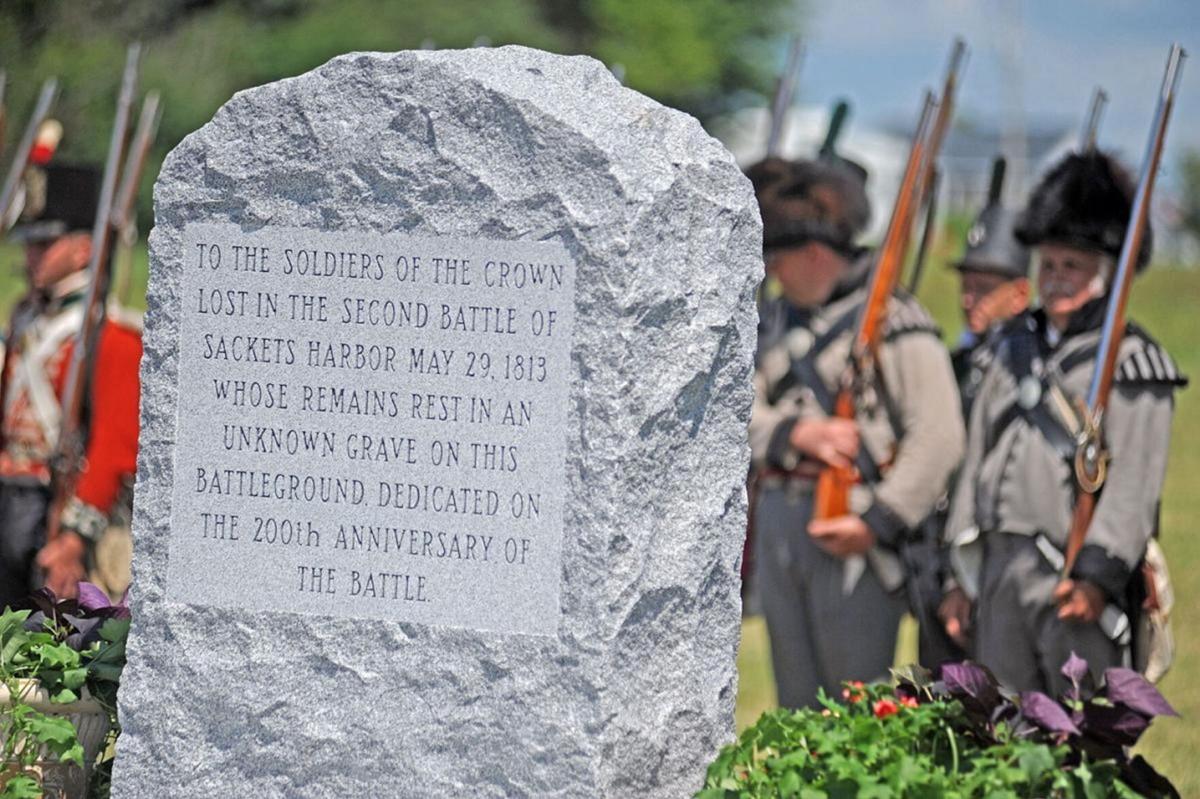 Members of the Canadian Army Guard stand guard behind the War of 1812 bicentennial monument to the Crown forces during a dedication ceremony in 2013 at the Sackets Harbor Battlefield State Historic Site. Watertown Daily Times

SACKETS HARBOR — Researchers are shedding new light on a battle that took place here during the War of 1812 thanks to a grant funded by the National Park Service.

The target by an archaeology team is Horse Island, about a mile west of the village. In July of 2017, the Civil War Trust (the predecessor of the American Battlefield Trust) purchased the 24-acre island from a private family with support from the National Park Service. It was the first War of 1812 site purchased by the trust.

New York State Parks, Recreation and Historic Preservation then acquired Horse Island from the trust in 2019, using about $135,000 from the state’s Environmental Protection Fund.

“This island was the scene of a short, but fierce battle, and an investigation may help uncover some of the remains that were left behind,” State Parks commissioner Erik Kulleseid said in a news release. “Any aspects of that will be preserved as part of our state’s historical legacy.”

The battle, in which American forces fended off a fierce British offensive, is listed by the National Park Service as one of the 20 most significant of the War of 1812.

Much of Horse Island has remained undeveloped since the battle, but there has been farming. A lighthouse was added in 1831 and replaced by another in 1870.

Constance B. Barone, site manager of the Sackets Harbor Battlefield State Historic Site, said the island was owned by the government before it became privately owned. The island was sold by the General Services Administration in 1958.

Plans call for the island to ultimately be made part of the Sackets Harbor Battlefield State Historic Site.

The shores of the island are now a popular spot for waterfowl hunters and the expanse between the island and the village is good for bird-watching, Mrs. Barone said.

“Some are migratory and some are year-round,” Mrs. Barone said. “You will often seen eagles on the island, which is quite lovely. The water is open between there and the mainland.”

That wasn’t the case during the War of 1812. Mrs. Barone said a “natural causeway” connected the island to the mainland at the time.

“Possibly in 1812, the island was even larger with lower lake water levels, therefore a shorter causeway,” she said.

The causeway was part of a strategic plan by the British in May of 1813. The island, Mrs. Barone said, provided the only practical landing spot, as the natural limestone cliffs fronting Black River Bay at the harbor protected the naval yard. The narrow causeway consisted of boulders, lake-worn stones and sand but it allowed troop movement.

The causeway connected the island until at least the early 1920s. In 1926 the lake water level was so low that vehicles could be driven across the causeway to-and-from the island, according to Mrs. Barone. She said that around that time, a lighthouse keeper or farmer who drove to the island on the causeway wrote he couldn’t get home one evening because the waves were crashing over the roadway.

On May 29, 1813, in an attempt to destroy its shipyard, a British force, also consisting of Canadians, launched an attack on Sackets Harbor. The first Battle of Sackets Harbor between the forces was fought July 19, 1812.

The 1813 attack began with an early-morning amphibious assault against American forces at Horse Island, just one segment of the three-hour battle. Americans encamped on the island initially prevented the British from landing, but later were forced to retreat across a causeway to the mainland.

Once landed on the mainland, the Crown forces didn’t have to confront the cliffs and advanced across the relatively level ground toward the harbor.

“But it then became a challenge to fight their way, starting from the planned and unplanned’ landing zone, to the ultimate objective,” Mrs. Barone said.

The invading British-Canadian force was eventually driven off, but the narrow victory was marred by a fire that destroyed the American military stores.

Mrs. Barone wrote a narrative of the battle for the American Battle field Trust. Some excerpts:

“Leading up to the Battle of Sackets Harbor was the American defensive posture based on the assumption that the British would have to disembark from their vessels on Horse Island just one mile west of the harbor, and traverse the approximately 300 yards long submerged narrow causeway of boulders, lake-worn stones and sand, that connected the island to the mainland. The island provided the only practical landing spot as the natural limestone cliffs fronting Black River Bay at the harbor protected the naval yard. In addition, the two American forts at the harbor’s entrance would provide stiff resistance to a direct assault.”

Defending the island, at “Camp Volunteer,” were the Albany Volunteers under Colonel John Mills. A small 6-pounder provided artillery support of the 160 or so troops on the island.

“During the night before the attack, NYS Militia General Jacob Brown visited Camp Volunteer,” Mrs. Barone wrote. “Fearing a night attack, he ordered the men to withdraw from the island and join his militia on the mainland as soon as an attack began.”

The August research at Horse Island was the first ever study there by archaeologists, Mrs. Barone said.

The investigation is being conducted by the Research Foundation for the SUNY Public Archaeology Facility at Binghamton University. The team, made possible by a $50,000 federal grant, made a return trip this past week.

“I don’t know what maybe is in the works for Horse Island, but in the meantime, just getting the archaeology done as a first step is very important,” Mrs. Barone said. “In that first visit, they did come up with a handful of artifacts that were very prominent.”

“And a lot of civilian buttons from that period, which speaks to the fact that we had basically citizen soldiers, volunteers from the Albany County area,” Mr. Grills said in a phone interview. “From what I understand, there was also a unit from Scoharie County that was on the island in support of the artillery unit that was there.”

Mr. Grills was accompanied by three other archaeologists from the Public Archaeology Facility and a geophysics team from the department of geology at Binghamton University. In the first visit, the geophysics team used a magnetometer, a device that measures magnetism — the direction, strength, or relative change of a magnetic field at a particular location — and ground penetrating radar.

But the research began with a state-mandated report by the team outlining research questions it was hoping to answer. Among those questions:

n If there was any type of defensive positions established by the Albany volunteers.

n Seeking evidence of the British landing and their advance across the island.

n Details on the American retreat off the island.

“Based on that research design, we developed a methodology for looking at and trying to answer those questions,” Mr. Grills said.

Methods such as visually studying and gridding the ground, (transects), metal detection, and using a magnetometer and ground-penetrating radar are used to find potential battle artifacts.

“We follow up with more of what laymen people might see as traditional archaeology methods with digging test unit holes, note taking, photographs and that sort of thing,” Mr. Grills said.

“When the data goes back to the state, and ultimately the battlefield protection program, they’ll have that data held in perpetuity for researchers,’ Mr. Grills said. “And the state can utilize it to develop their preservation plans going forward and how they plan to interpret Horse Island either as they develop the island for public access or how they want to protect the cultural resources that are out there.”

The GIS information, Mr. Grills said, has the ability to discover specific details of the battle, such as where a shot from a found minni ball came from and where people were positioned on the battlefield.

“Those are things you can’t generally pull out of primary documents because a lot of those primary documents are kind of generalized, after-action reports,” Mr. Grills said. “The archaeology allows us to get another level of detail to add to the story.”

Even though the team is the first professional survey team on the property, Mr. Grills said that doesn’t mean the battlefield has been untouched.

“Battlefields are always an evolving landscape,” he said. “So while we think that no one has ever been there before, there’s been activity and people on the island for the 200 years following the battle.”

Mrs. Barone cautions the public not to visit the island to do their own battle research or relic hunting. There are various laws against using metal detectors or digging for relics on state lands and on battleground sites. The island also has no amenities, such as bathroom facilities. Visitors could also disturb the plant and wildlife, she said.