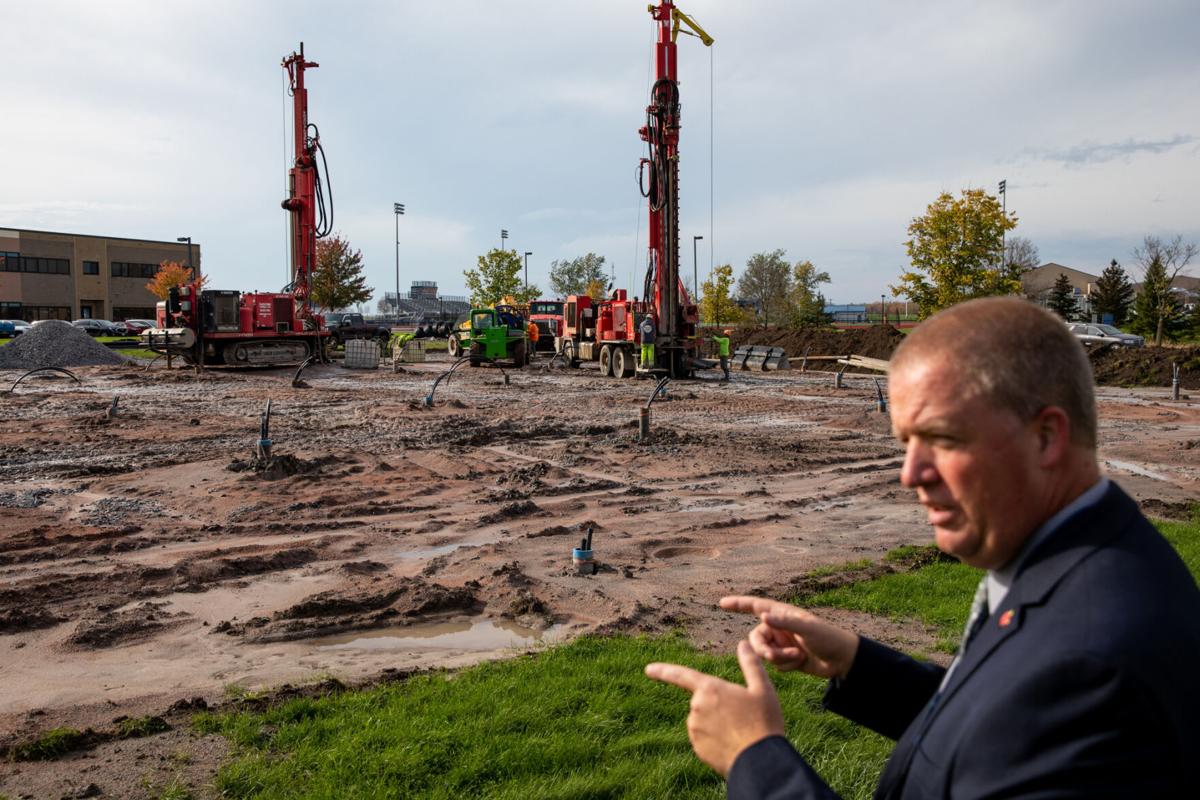 Indian River Central School District Superintendent Troy Decker describes the process of geothermal heating and cooling near the site where crews work Thursday to complete part of the capital project near the middle school in Philadelphia. Kara Dry/Watertown Daily Times 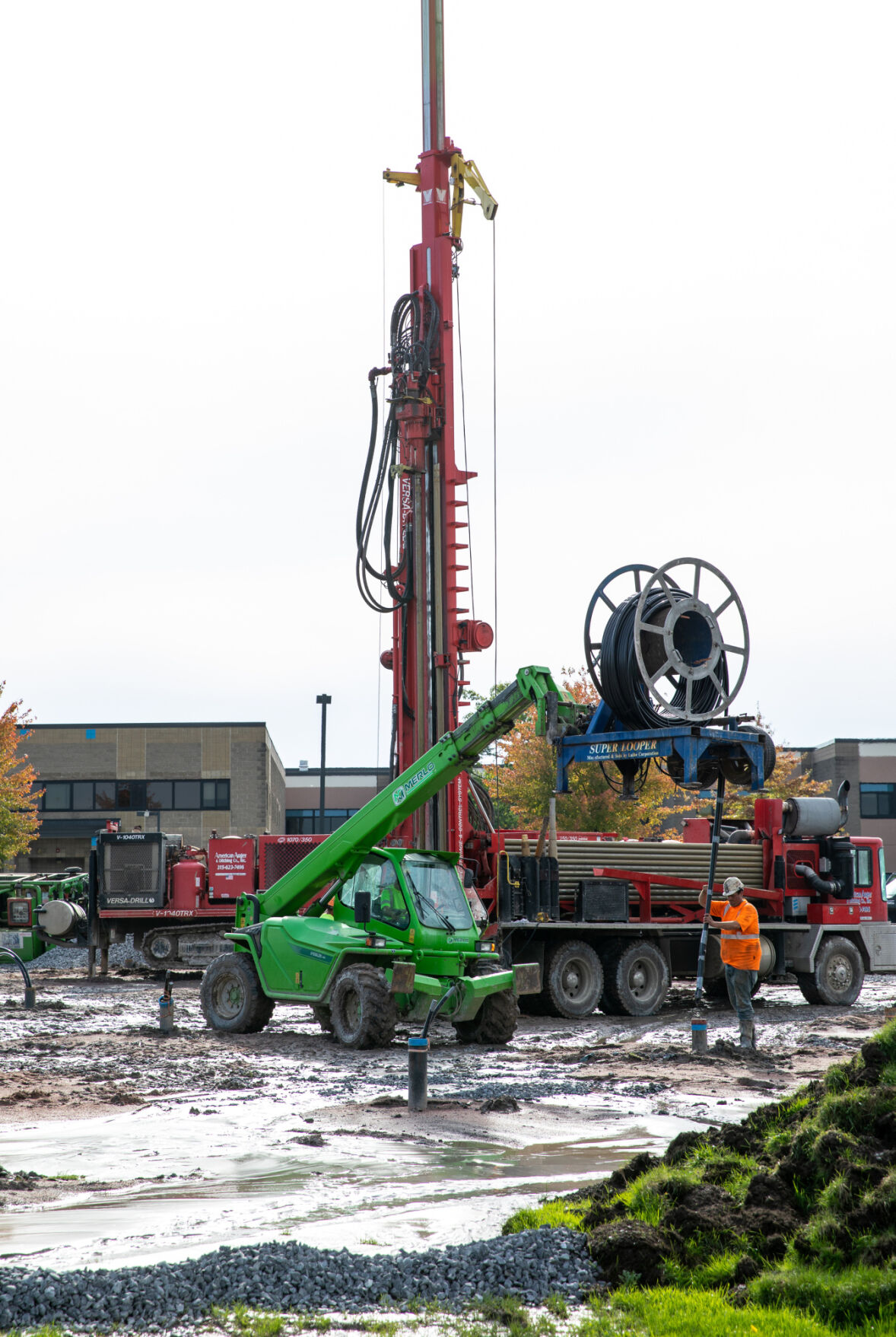 Crews work on a geothermal energy site, part of a capital project, in front of the Indian River Central School District office and middle school in Philadelphia on Thursday. Kara Dry/Watertown Daily Times 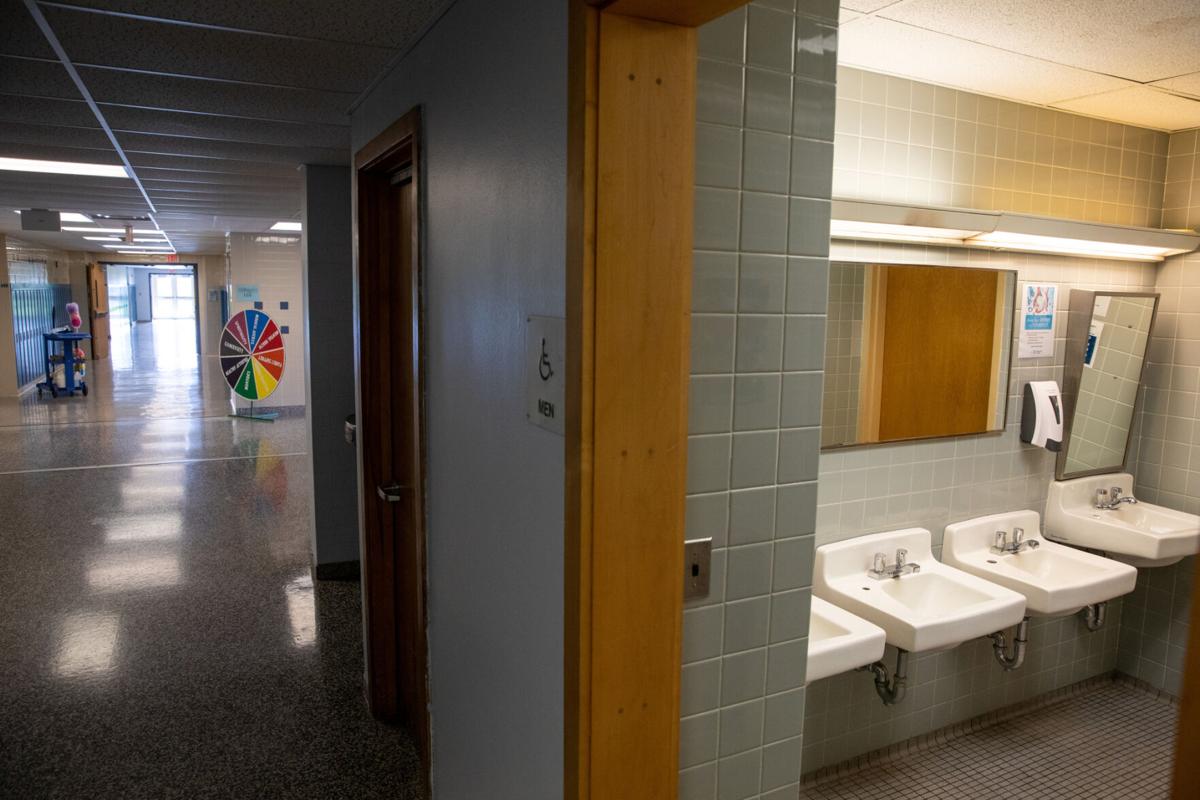 Outdated bathrooms in the high school are on the list of needs in a capital project for Indian River Central School District in Philadelphia. Kara Dry/Watertown Daily Times

Indian River Central School District Superintendent Troy Decker describes the process of geothermal heating and cooling near the site where crews work Thursday to complete part of the capital project near the middle school in Philadelphia. Kara Dry/Watertown Daily Times

Crews work on a geothermal energy site, part of a capital project, in front of the Indian River Central School District office and middle school in Philadelphia on Thursday. Kara Dry/Watertown Daily Times

Outdated bathrooms in the high school are on the list of needs in a capital project for Indian River Central School District in Philadelphia. Kara Dry/Watertown Daily Times

PHILADELPHIA — Indian River Central School District residents will have the opportunity on Nov. 16 to vote on additional funding for the district’s $41 million capital project, coming on the heels of increased labor and material costs due to the COVID-19 pandemic.

With the pandemic increasing costs well beyond the original estimates, the district will need an additional $25.75 million to complete the same scope of work that voters approved in the spring of 2019.

According to Superintendent Troy W. Decker, within that $25 million is some built-in cushion, so that in the event that costs continue to escalate to any unprecedented levels, there would be at least some means to allow for that.

“Because we’re now with a volatile and unknown environment, our architects, engineers and financial planners don’t recommend putting forth a bare bones proposal with so many unknowns in the marketplace for labor and materials,” Mr. Decker said.

The additional funding will allow the district to complete in-progress projects, including essential health/safety, mechanical, structural and electrical elements within school buildings. The capital project focuses on things like roofs, climate control and essential renovations to the district’s buildings.

Both instructional buildings and main support buildings were addressed within the plan. The district’s four primary schools, along with the intermediate, middle and high schools, were included in planning for work, as well as the Calcium storage building, the transportation facility, maintenance center and concession building.

Some of work the district hoped to have completed by the end of the project when plans were drawn up include:

— Replacement of aggregate panels and windows

With voter approval now, all aspects of the project can be completed with no impact to the local tax levy. Part of the reason is the favorable state aid the district receives, Mr. Decker explained.

“We have a district that is, I would say, on the more conservative side of the New York state wealth ratios,” he said. “As a result of that, we have favorable state aid, so in the current state aid environment, we can have this project funded by state aid bonding. For the mortgage, the bond that we take out, we can get almost all of that back.”

As is, the $41 million capital project also did not increase the tax levy. According to Mr. Decker, the last several projects of the district, encompassing millions of dollars, have all occurred with no tax levy increase.

The district has been able to take advantage of this through careful planning and timing, Mr. Decker said, because as long as the district keeps its bonds — the bond is a mortgage — at about the same level, with the same amount of money going in and coming out, it can do so without having a tax levy increase.

Delays in approval will take these priority infrastructure items out of the current project and increase costs, as well as push important building renovations to a later date.

“The longer we delay, the higher the cost, but even more important than that, we’re talking about the upgrades, replacement and preventive maintenance to some essential things like boilers and water heaters and roofs, so if we delay longer, we have more repair costs for those pieces while we’re waiting for replacement,” Mr. Decker said. “For all those reasons, first and foremost health and safety of our students and staff, infrastructure needs and to save money, it makes sense to do it now.”

The two biggest components of the project are at the district’s middle school as well as Antwerp Primary.

At the middle school, a complete renovation of the heating ventilation system, reroofing, LED lighting upgrades, replacement of the pool boiler, an upgrade of the pool treatment system and storage are on the list, coming in at an original total building cost approved for $17,571,600.

Classroom renovations, changes, enhancements and maintenance are to take place at Antwerp Primary, with an original total building cost approved at nearly $5 million. By the end of the project, the school is to receive things like LED lighting upgrades, upgraded alarm and PA systems, crawl space ventilation, full building air conditioning, and more.

The third component is maintenance at all the rest of the buildings in a variety of ways, Mr. Decker said, and while none of this maintenance is all that exciting, being things like heating, ventilation, lighting and electrical, they are essential items to keep the district moving forward.

A large portion of the project is already underway, with the first phase scheduled to close out by the end of the year, and the construction part of the second phase set to begin in January, if all goes according to the original plan.

Voting on this additional funding for the capital project will take place from noon to 6 p.m. on Nov. 16 at the district office. In the next few weeks, the district will be putting out additional information to district residents on its website and social media platforms.

“We’re trying to be good stewards of our school buildings, our resources and our community, and if we’re going to do so, common sense says now’s the time,” Mr. Decker said. “Getting people to come out and vote, sometimes it’s a little bit of a challenge but I think we’ll be OK. I’ve got confidence in our taxpayers and everyone’s understanding of what we’re trying to do to help our kids and our community.”

Why not call on representative Stefanik for help. Are not many students military dependents from Ft. Drum?