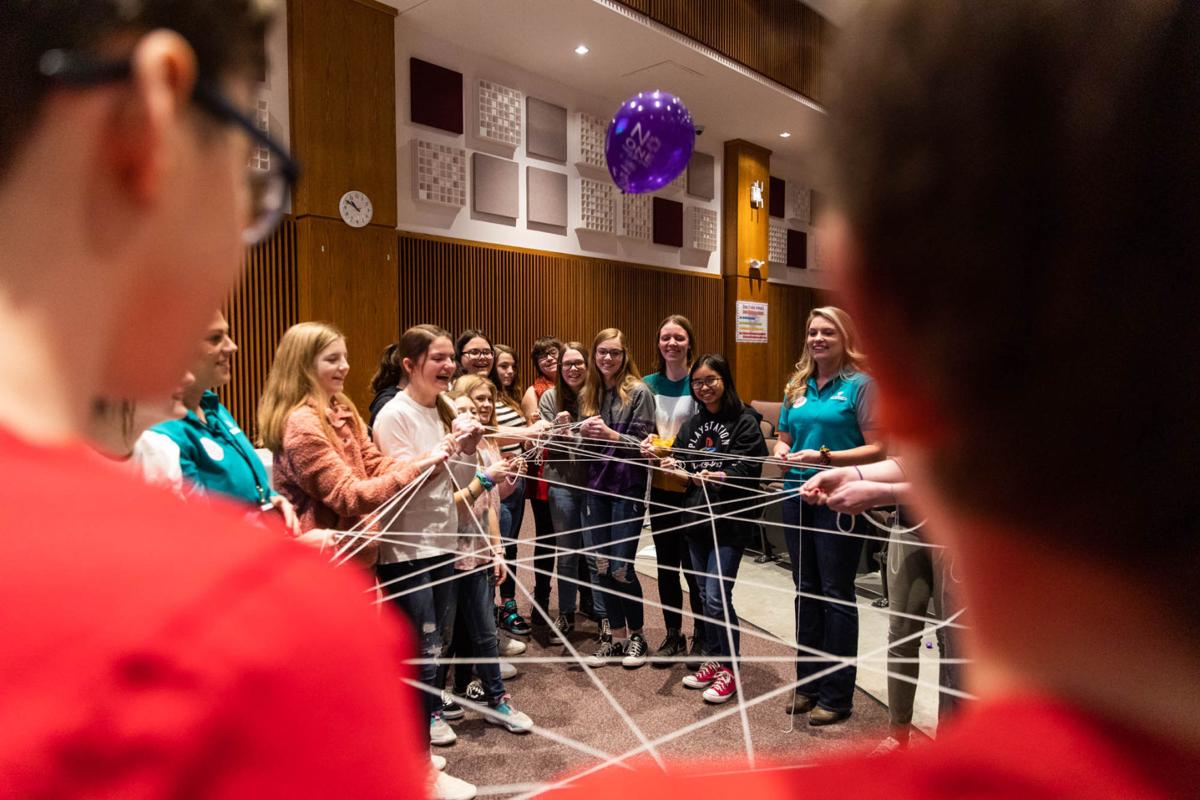 Case Middle School students work together to keep a balloon afloat during an inclusion exercise in the school’s auditorium Friday morning during National No One Eats Alone Day. Sydney Schaefer/Watertown Daily Times 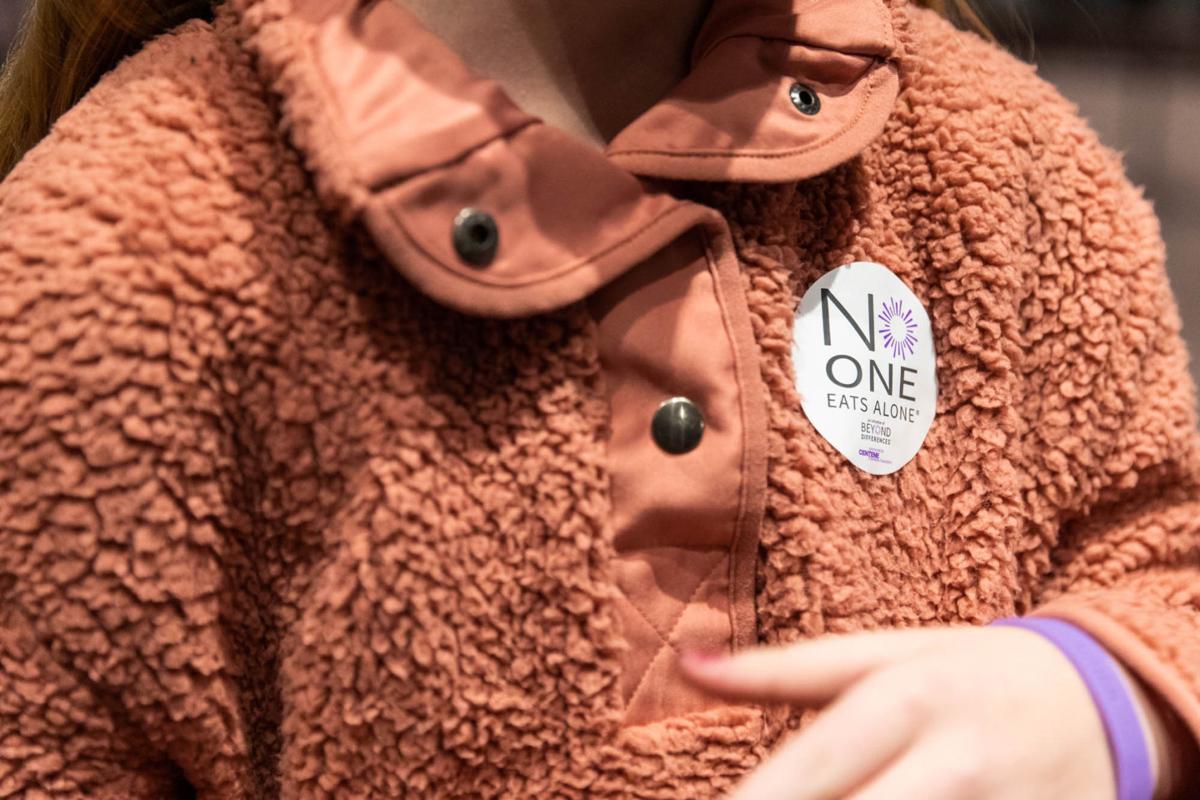 A student wears a sticker on her sweatshirt that states “No One Eats Alone” on Friday. Sydney Schaefer/Watertown Daily Times 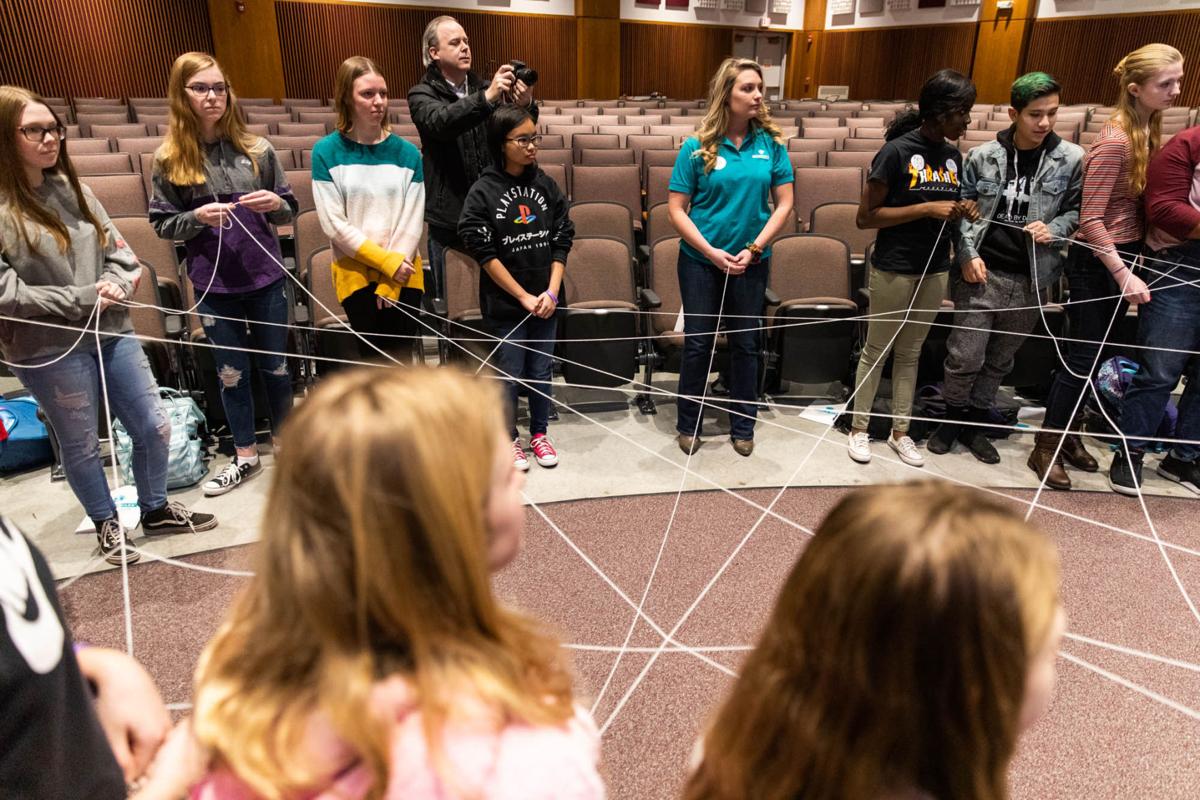 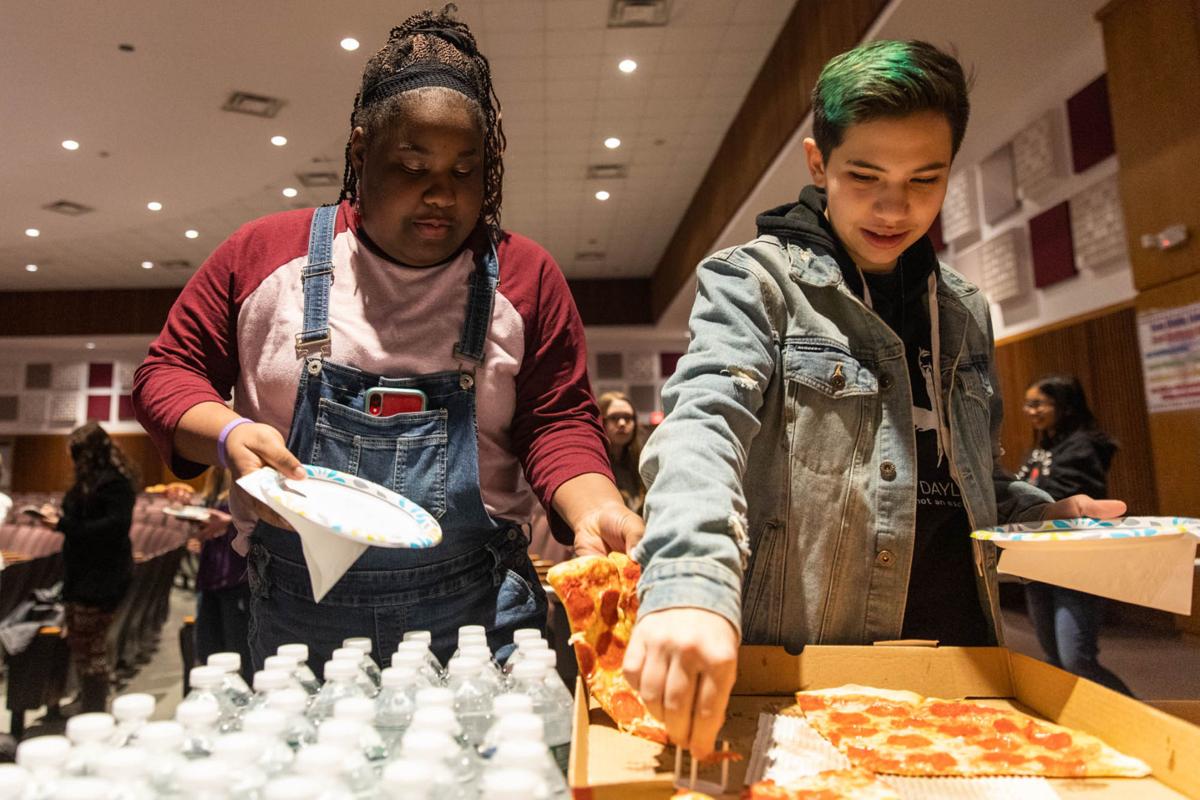 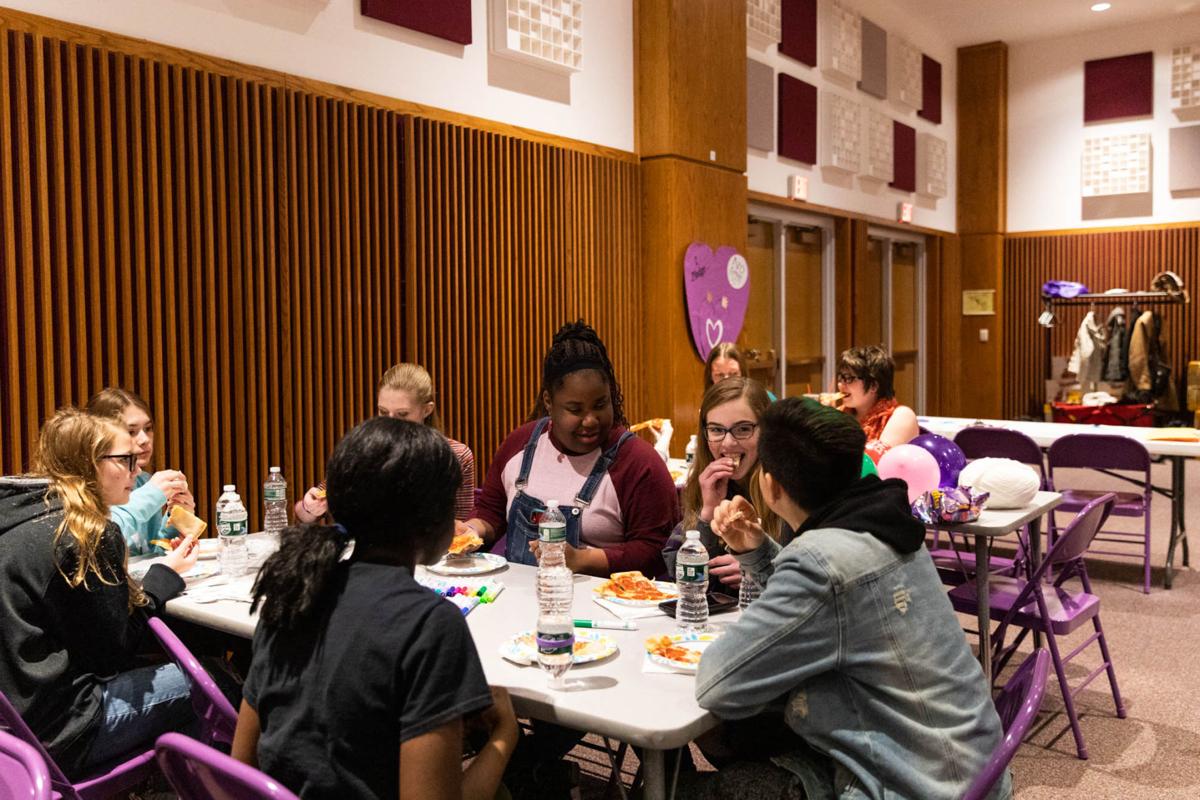 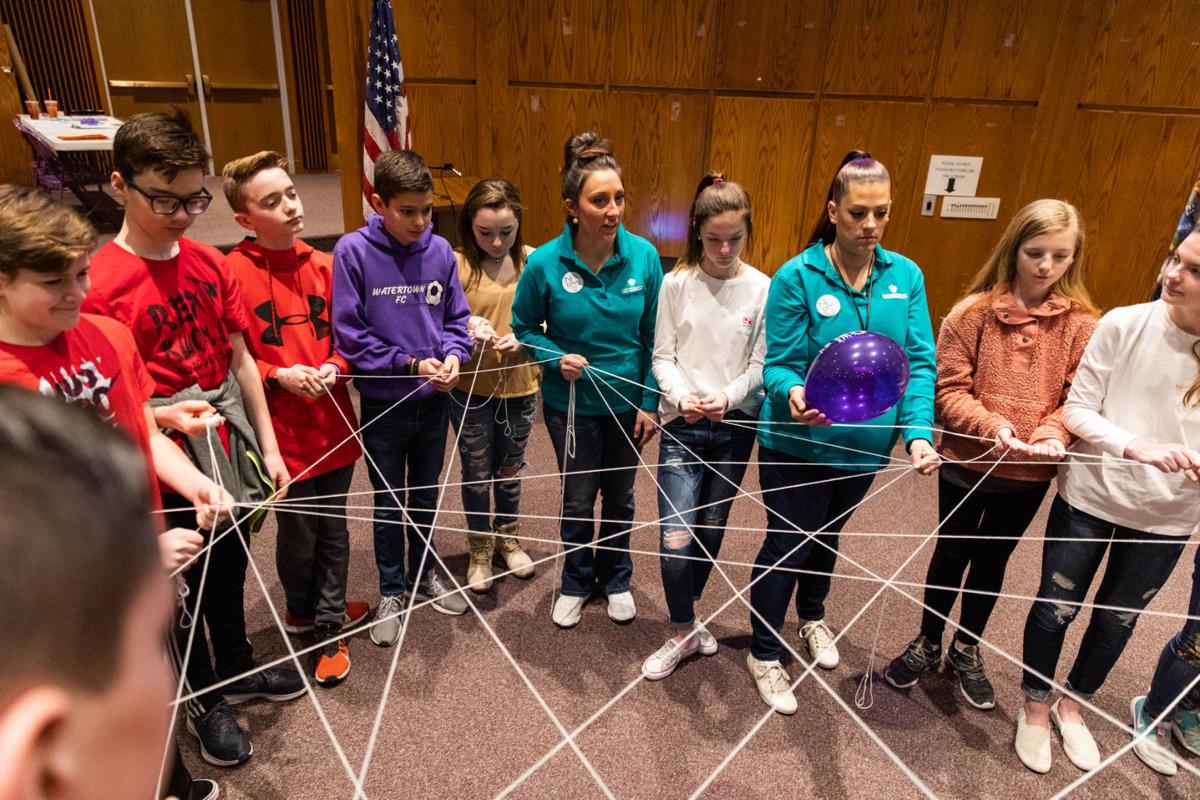 Case Middle School students work together to keep a balloon afloat during an inclusion exercise in the school’s auditorium Friday morning during National No One Eats Alone Day. Sydney Schaefer/Watertown Daily Times

A student wears a sticker on her sweatshirt that states “No One Eats Alone” on Friday. Sydney Schaefer/Watertown Daily Times

WATERTOWN — About 30 students at Case Middle School took turns Friday passing a ball of yarn back and forth, each holding on to a piece of it until they were connected in a web.

This was one of a few exercises done with students in honor of National No One Eats Alone Day, created by the nonprofit group, Beyond Differences. The program was brought to the school by Fidelis Care as a positive prevention initiative designed to promote inclusion in middle schools.

“This is a neat opportunity and when I was first approached I didn’t know a lot about what this was, but I just thought it’s a program that can help kids fit in better or feel more comfortable here I’m all for it,” said Mark Taylor, the school’s principal. “We’re going to do everything we can do to try to make it happen.”

Students learned about social isolation and the negative impact it can have on a student’s health and academic performance. Social isolation is a preventable public-health crisis affecting millions of students and has been identified as a precursor to bullying, self-harm and community violence.

Once the day’s activities had been completed, the students were treated to a pizza lunch.

“This is a really unique opportunity because this is a training for students to understand the importance of inclusion and in speaking with the students, a place that they feel is most difficult for kids is the lunchroom,” said Carla VanWormer, school counselor. “If you’re not fortunate to get into a lunch period where you have your own friends, it can be a very lonely place.”

Case Middle School is one of more than 2,500 schools across the country that celebrated National No One Eats Alone Day. The nationwide event came about because there was a need to identify children that are socially isolated, according to Tom Julian, regional director of sales and marketing for Fidelis Care. Studies have shown that people who are in social isolation tend to be more violent.

“In today’s society, bullying starts with isolation,” he said. “In a school setting, if you can stop one bully it’s a good thing.”

Of the nearly 600 students at Case Middle School, these select 30 were chosen because they represent some of the school’s leaders and consist of members of organizations like the National Junior Honor Society and Students Against Destructive Decisions. The school was approached about the event just weeks ago, so with the short turnaround, they wanted a smaller group to receive the training and then go out into the school to put what they learned to the test.

After the kids had finished the activities with Fidelis, they were given gift bags to take home with information about Fidelis Care as well as about the program so they can continue it in their school.

“We’re just thankful that these programs exist and that we were fortunate enough to be a school that Fidelis contacted because they could contact any school, I don’t know how we got so lucky,” she said. “We welcome any other programs that are similar and it just starts with one simple act of kindness, so we’re super excited to see how this works out for our kids.”

As the students filed in on Friday, Fidelis members encouraged them to take notebooks, pens, wristbands and more from a table set up by the door. After the Fidelis members had introduced themselves to the students, the event began with the showing of a video about breaking down the walls of social isolation.

Other activities included the kids breaking off into pairs to “interview” each other and gather information about their partners to present to the group at the end and taking the time to get to know one another.

Seventh-grader Jocelyn St. Joseph said she wanted to participate in the day’s activities because she feels like people are excluded a lot in schools and wanted to know how to be more inclusive. Her classmates Ella Smith and Mia Kelly echoed that sentiment and expressed the importance of treating others how you would want to be treated and hoping people realize it’s cool to be kind, respectively.

As the students were connecting themselves with the yarn, they were physically demonstrating how connected they were to one another and took the time to share their ideas for inclusivity at the school as they passed the ball of yarn back and forth. Some ideas offered by the students were more interaction between students, bigger lunch tables to fit more people, more interactive assemblies and showing more respect toward other students.

“The web thing stood for how if our differences and similarities are linked together, they can do something really cool,” said eighth-grader George Weir. “I feel like there are a lot of opportunities to meet people and there’s just not enough kids doing it. That’s a really bad feeling for the person being excluded and I want to help them.”

After each student was holding a piece of yarn in the web, they were asked to move in closer and tighten the web and try to keep a balloon up in the air and not allow it to fall through the cracks. This was an exercise to demonstrate how easily things can fall through the cracks and show that by working together, students can stop their peers from falling through.

“I’ve never been in that position before where I’ve been left out, but I’ve seen people be left out and I’ve heard what people say to them so I really wanted to participate in this today because I really wanted to make a change,” said seventh-grader Riley St. Joseph. “I think if we start doing this and making a difference then other students will get involved and realize how cool this is and we will make this school a much better place.”