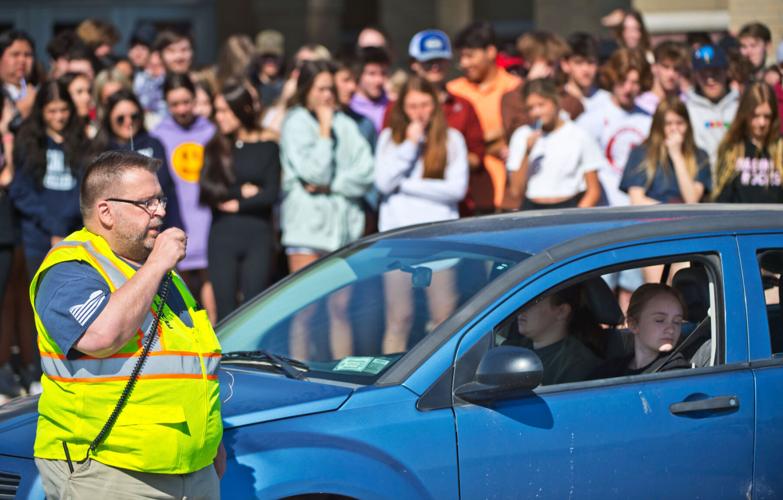 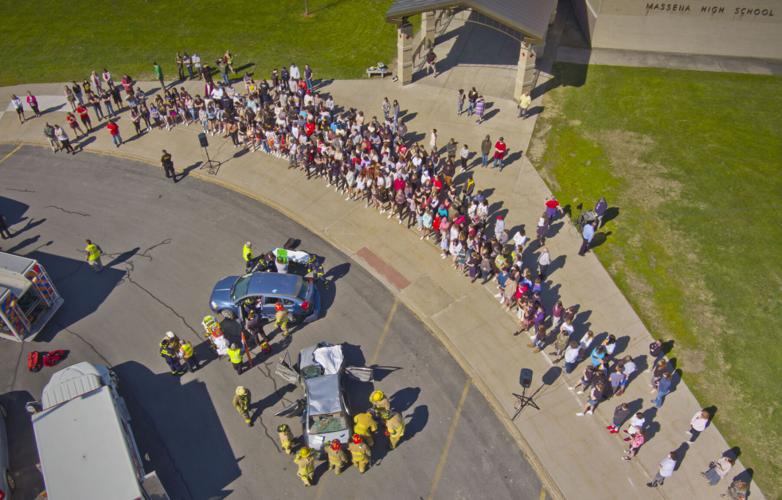 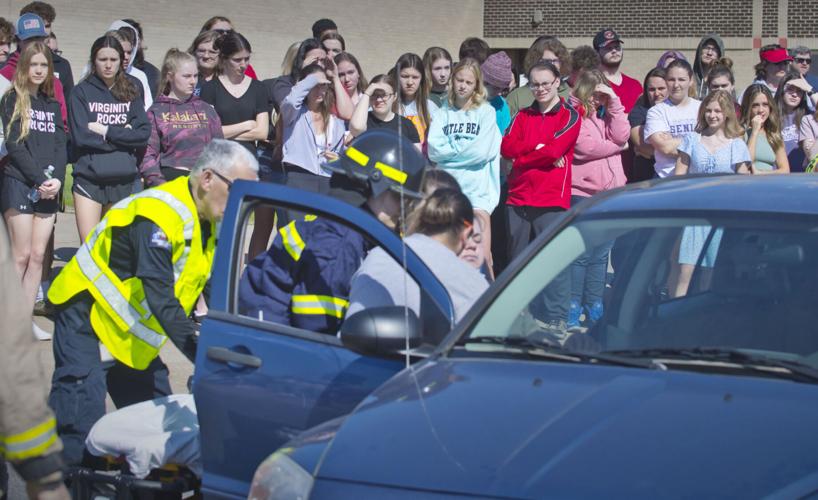 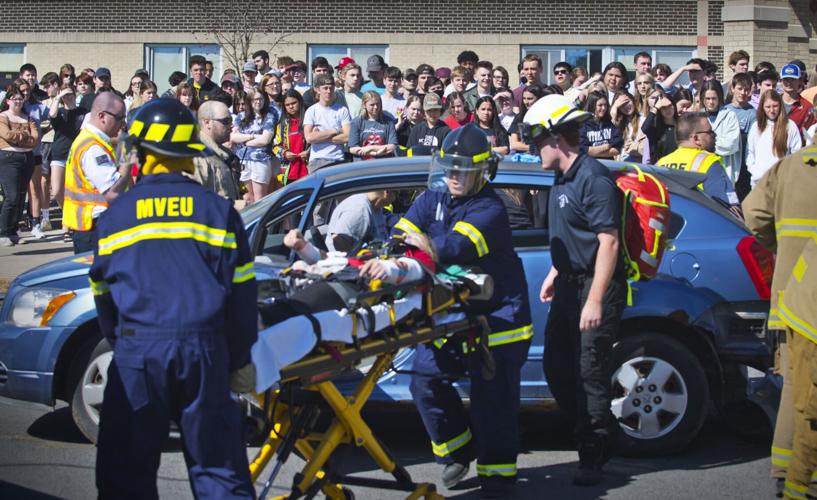 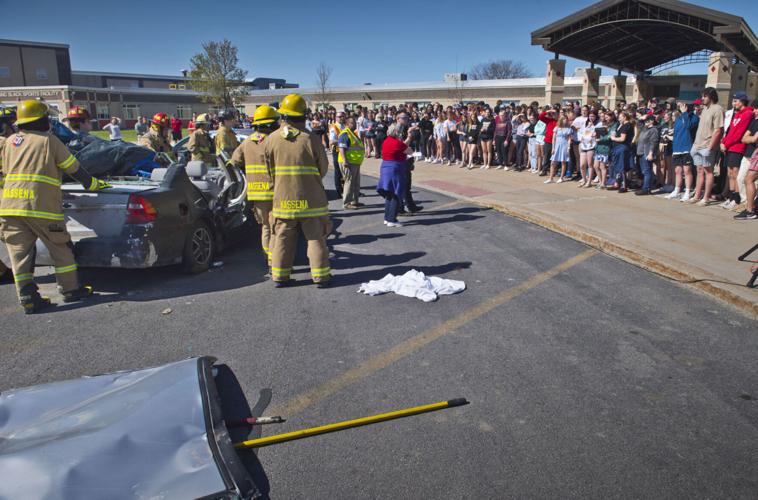 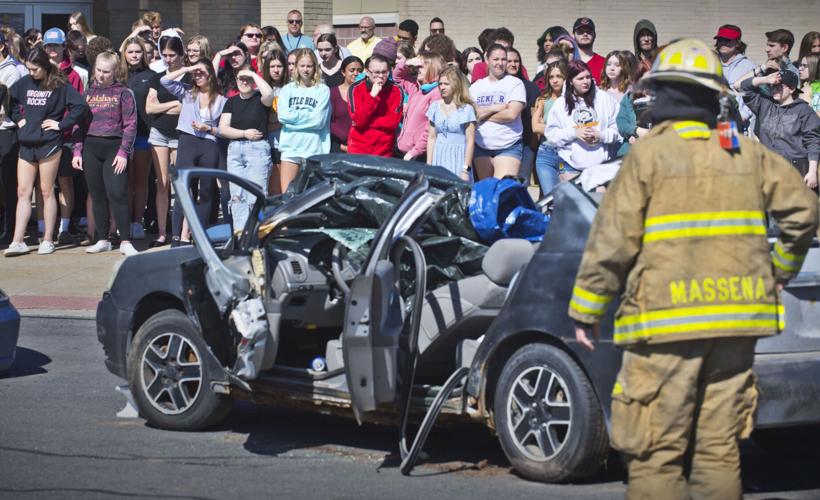 Juniors and seniors at Massena Central High School view the wreckage of a car involved in a simulated driving while intoxicated car crash in front of the school Tuesday. Christopher Lenney/Watertown Daily Times

Juniors and seniors at Massena Central High School view the wreckage of a car involved in a simulated driving while intoxicated car crash in front of the school Tuesday. Christopher Lenney/Watertown Daily Times

A two-vehicle crash, one filled with littered beer cans and liquor bottles. Three students injured. One student dead. One student led away in handcuffs for driving while intoxicated.

It wasn’t an actual accident, but a detailed reenactment as part of a mock DWI demonstration for the school’s juniors and seniors who, in less than a week, will be attending their prom.

As the students watched, emergency vehicles rolled up to the scene, led by the Massena Police Department and followed by the Massena Rescue Squad and Massena Volunteer Fire Department. The Donaldson Funeral Home was also on the scene to transport the “dead” student, who had crashed through the windshield and rested on the hood, covered in blood.

Principal Alan C. Oliver said he had been contacted by one of Massena’s volunteer firefighters to work with the St. Lawrence County Stop-DWI program to set up a mock crash.

“A couple of first responders will essentially be at the crash scene explaining what’s going on. Obviously, the intent is to show the brutality of a DWI crash and get that idea in people’s heads ahead of prom season, which is right around the corner,” Mr. Oliver said. “We also understand that an event like this can be a little jarring for kids, especially if they have some experience in their own lives with this. We’re also going to have our counselor staff on hand in case this triggers anything for anybody.”

Prior to the reenactment, Donald Thompson from Canton Fire and Rescue applied makeup to students Kristen Oliver, Madeline Tusa, Logan Eggleston and Emilie Fregoe, who had volunteered to serve as the “victims.” Student Faith Halladay also participated as the driver.

Mr. Miller said it was a scene the responders have encountered before in real life.

“Don’t think it doesn’t happen. Unfortunately Massena Fire and Massena Rescue have seen this happen many, many times. As you watch, just be thinking about this. I went to this school and I know how this happens. I lost one of my classmates due to this very thing. So, this is real for me. Be thinking about that when you’re making decisions,” he said.

He simulated calling 911 to alert other agencies to the crash, and the response was underway.

“Dispatch, be advised. I have a two-car MVA (motor vehicle accident) in the circle in front of the high school. It appears to be four victims. Please dispatch Massena PD (police department), Massena Rescue and Massena Fire to the scene,” Mr. Miller said.

As the sound of sirens got closer to the school, he told the students, “It’s going to get real now. They all work together.”

When the hearse had pulled away and the exercise was over, he again asked students to make careful decisions before getting behind the wheel of a vehicle.

“Stop and think about what you’re doing. Make good choices,” he said.

Mr. Miller said the departments would hold a similar exercise in the future to remind students of the dangers of driving while intoxicated or under the influence of drugs.

“Massena Rescue and Massena Fire will be doing this two years from now. We’re going to start doing it every two years,” he said.

In the meantime, as Michele James, program coordinator for the St. Lawrence County Stop-DWI program said, “make memories, not memorials.”