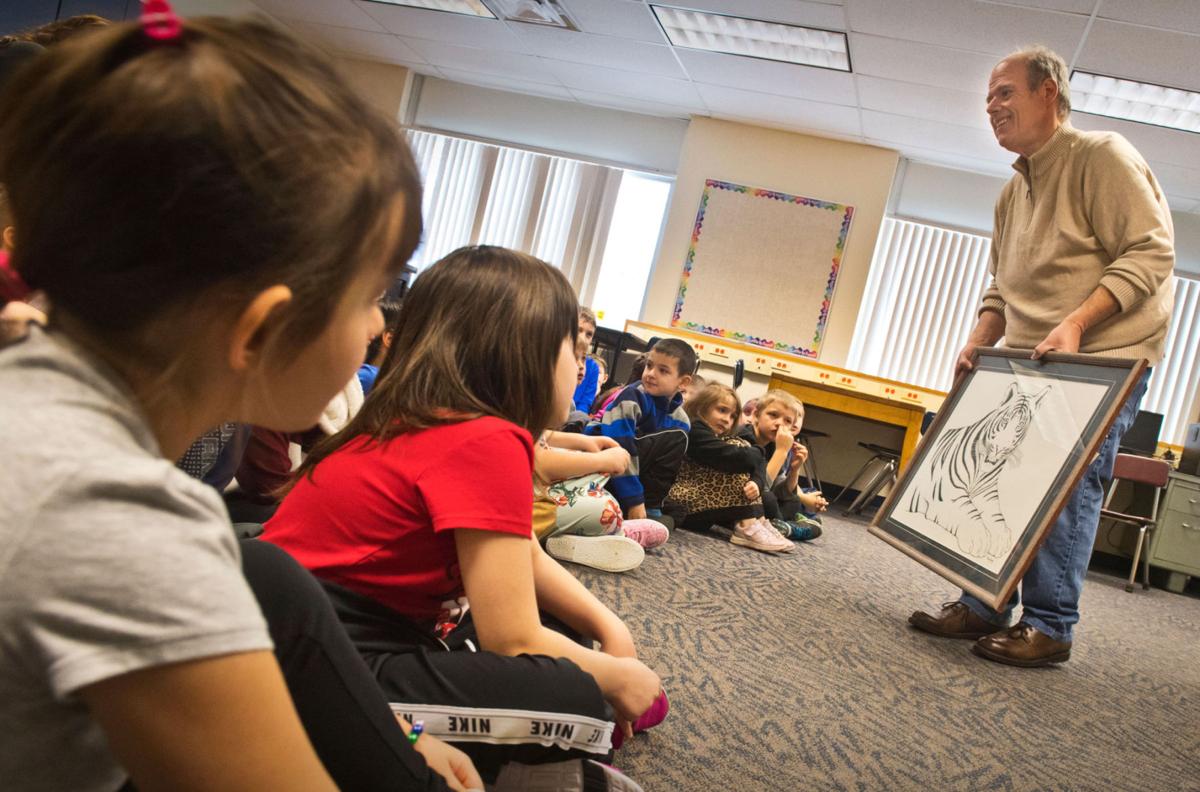 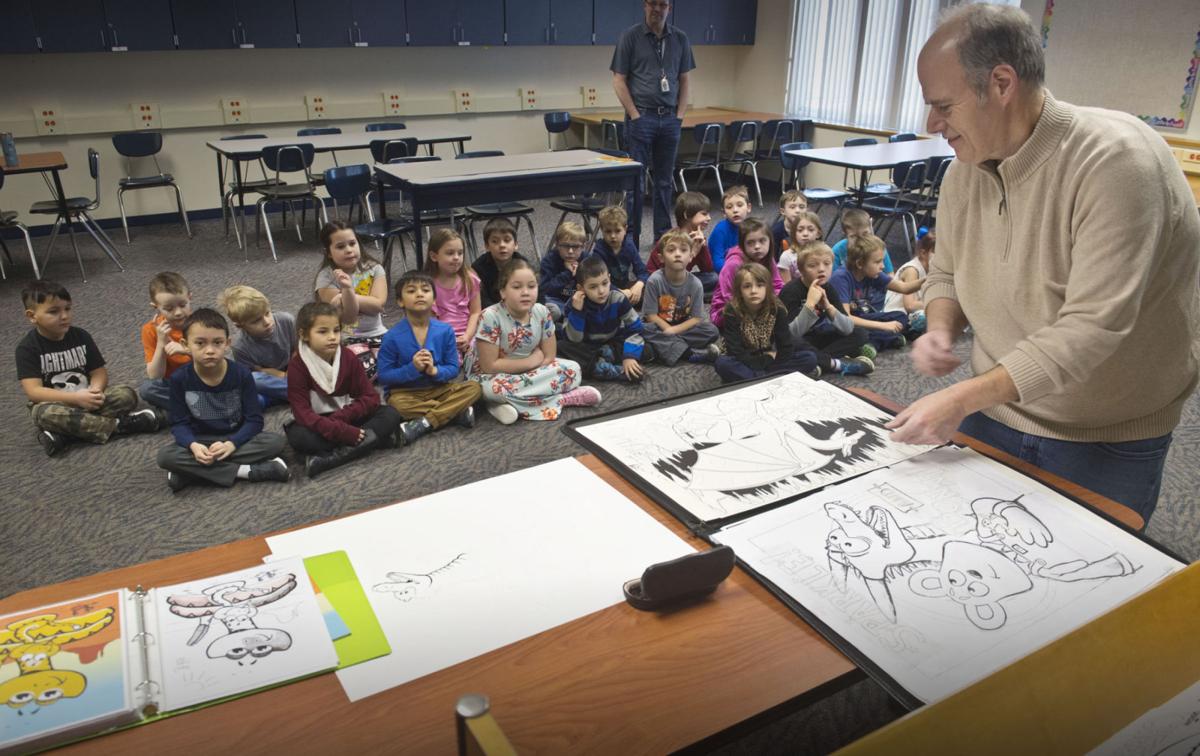 Douglas Fregoe grabs a drawing to display to first-graders at St. Lawrence Central Elementary School Friday as he talks about working as an illustrator. Christopher Lenney/ Watertown Daily Times 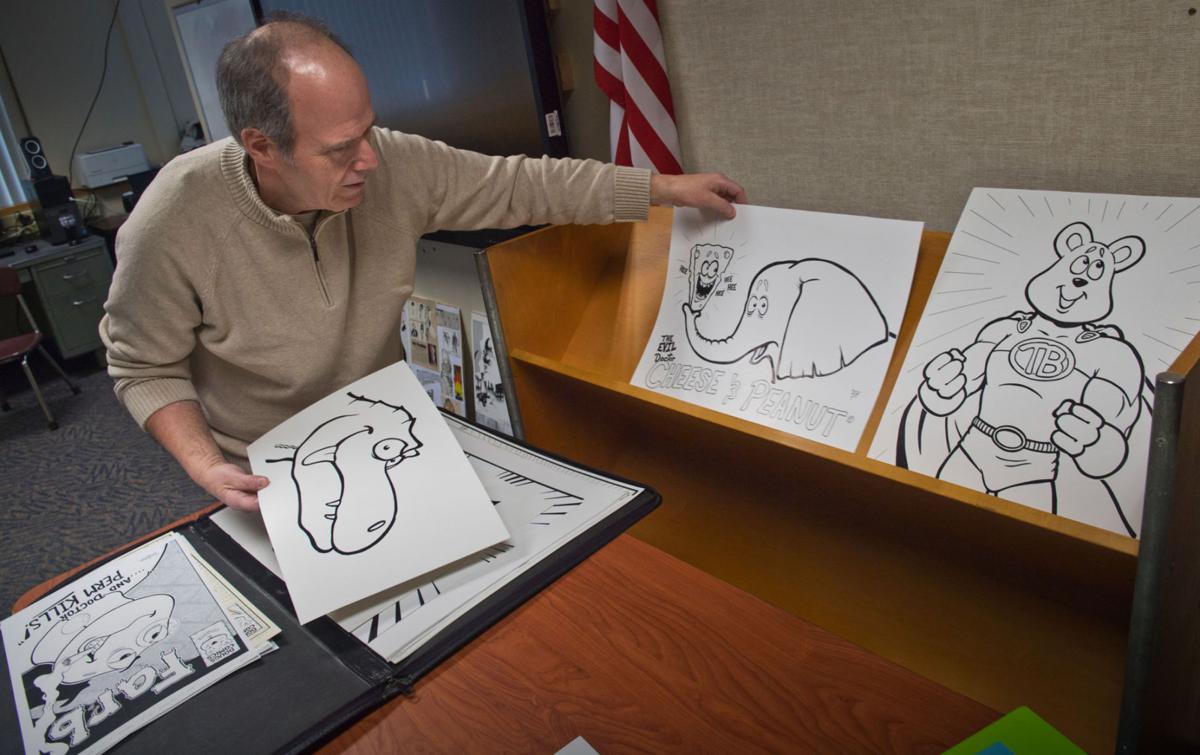 Douglas Fregoe grabs a drawing to display to first-graders at St. Lawrence Central Elementary School Friday as he talks about working as an illustrator. Christopher Lenney/ Watertown Daily Times

BRASHER FALLS — If you can dream it, you can draw it.

“I just come up with them. Lately I’ve been drawing more because I enjoy it more and more,” said illustrator Douglas Fregoe, who shared his craft with first-graders Friday at St. Lawrence Central Elementary School.

“I’ve had no formal training, no classes, no college art classes. You can draw whatever you like. You just draw and learn on your own. Draw anything and everything,” the Massena resident said.

First-grade teacher Marcie Lawrence had seen Mr. Fregoe’s illustrations on social media and invited him to come in and talk with the four first-grade classes, who had started learning about drawing in kindergarten.

“It’s great to have someone with his experience come in,” she said.

Mr. Fregoe said he has loved drawing since he was a child.

“I loved comic books growing up. I just wanted to keep going,” he said.

He keeps many of the pieces he’s drawn, or he’ll give them away.

“I usually just do it for myself,” Mr. Fregoe said.

However, he said, he had been commissioned locally to draw a person’s children, and he’s also the illustrator for a book written by Tina Hartigan, called “Ronnie the Rattler.”

He said Ms. Hartigan contacted him about illustrating a book that she was writing.

“We both went to this school,” he said.

In this case and others, he used the internet to see an actual picture of what he would be drawing.

“She gave me free rein to do whatever I wanted. It changed over time. The head got smaller, the eyes got browner. I colored it with a paint program on a computer with the help of one of my 15-year-old daughters,” he said.

Both the artwork and story received high praise on Amazon. One reviewer wrote, “First of all, the high definition artwork for ‘Ronnie the Rattler’ is as wonderful as the story itself! All 33 pages have beautiful landscapes and Ronnie the Rattler and his family are no exception either!”

Mr. Fregoe showed the students work that had been done by other illustrators, whether it was for comics, magazine covers or some other medium.

He suggested starting out with the piece of scrap paper, a No. 2 pencil and a white eraser. Sketch the idea and then, using a light box or a clean window with light coming in as a source, overlay a clean white poster board on top of the sketch and begin working on the final piece.

“I trace out what I had done underneath,” Mr. Fregoe said.

There are no restriction on what can be drawn.

“Illustrations can be anything,” he said.

An illustration of a tiger was one example of what could be done with a little bit of imagination and time.

“At first it was just a small kitty, basically,” he said. “Baby Yoda didn’t start out as Baby Yoda.”