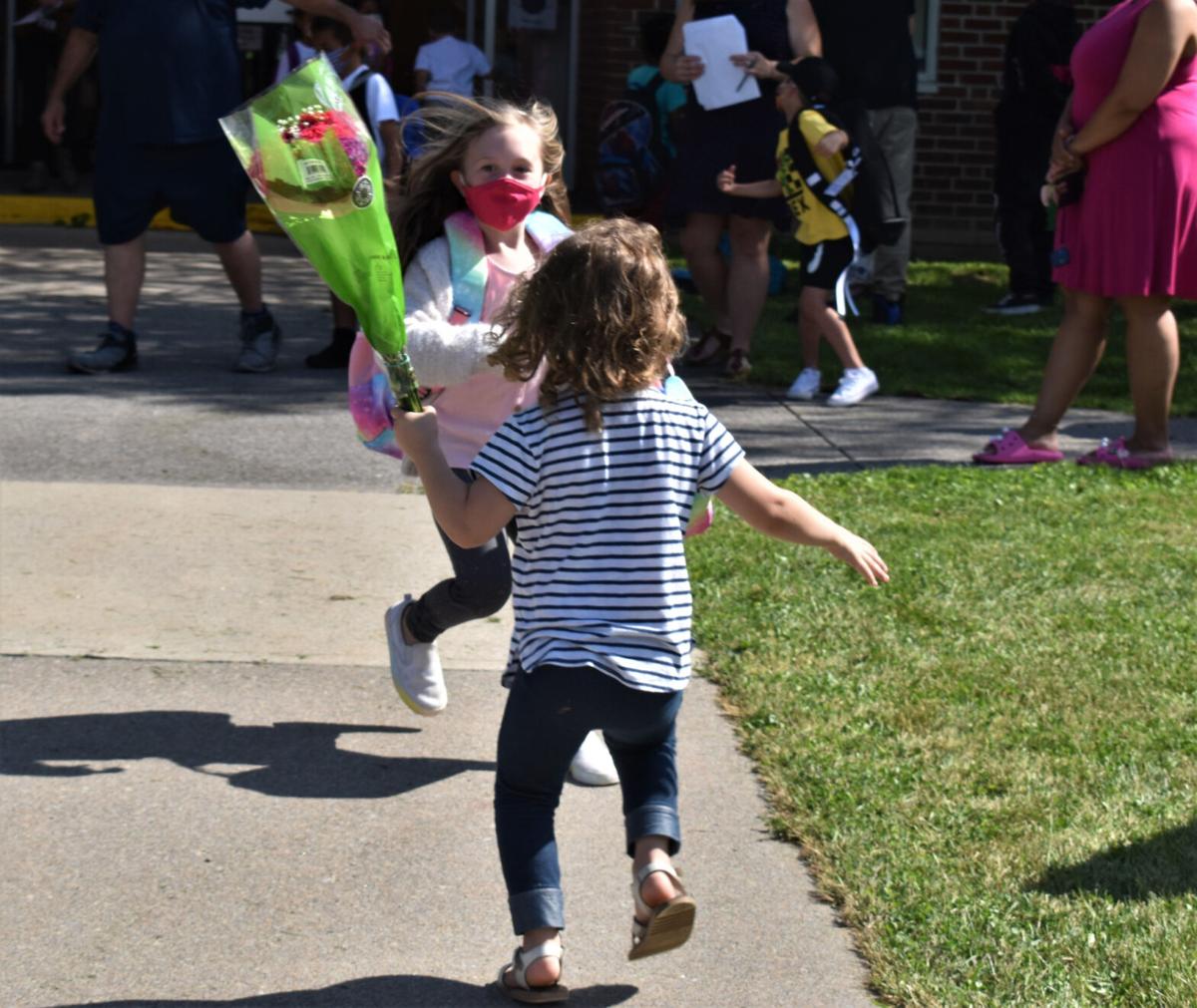 Sisters Aubrey, 4, and Alayna Walker, 6, run to hug each other outside of Starbuck Elementary School on Tuesday. Rachel Burt/Watertown Daily Times 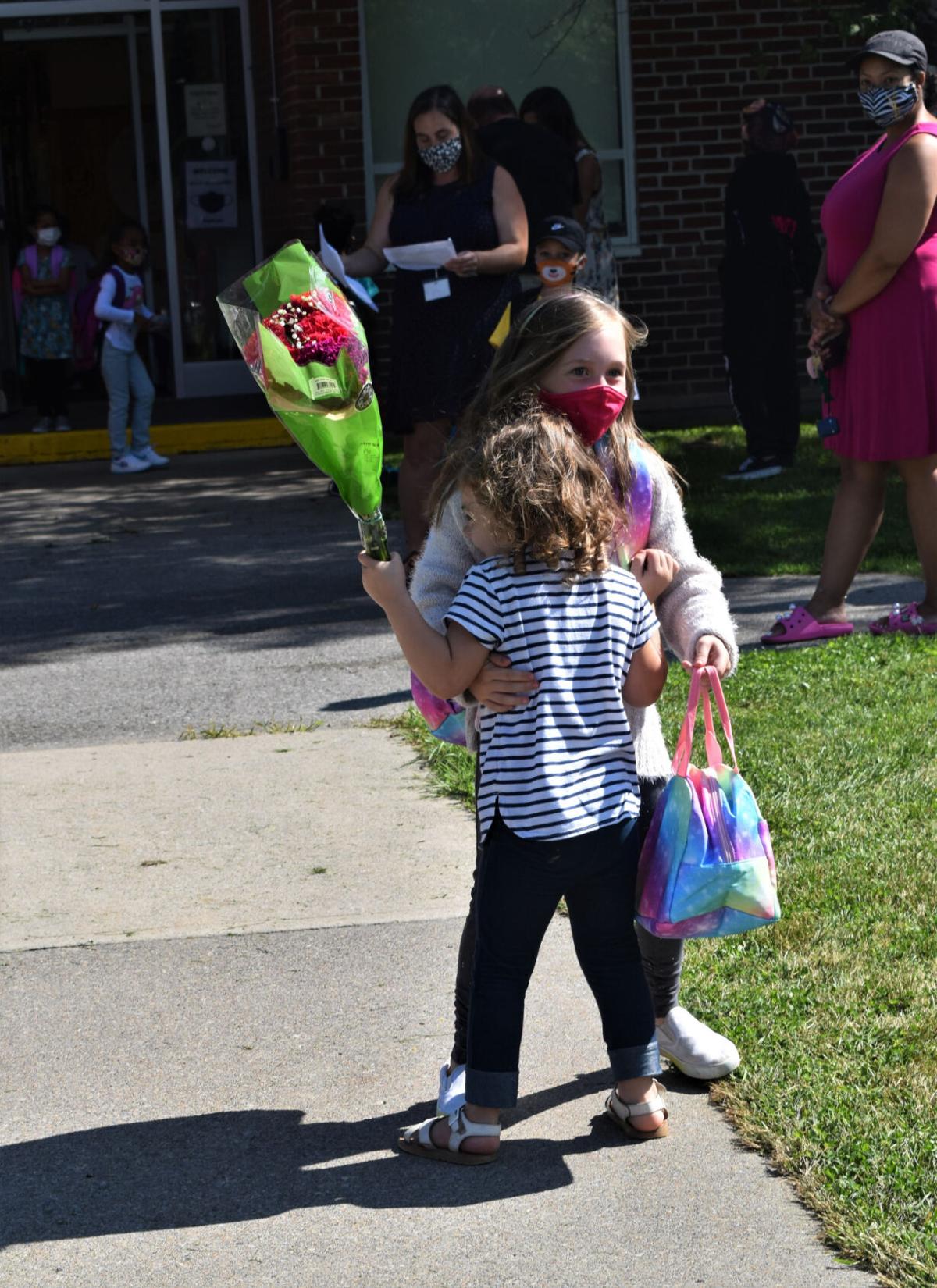 Alayna Walker 6, holds the flowers her sister gave her outside of Starbuck Elementary School on Tuesday. Rachel Burt/Watertown Daily Times 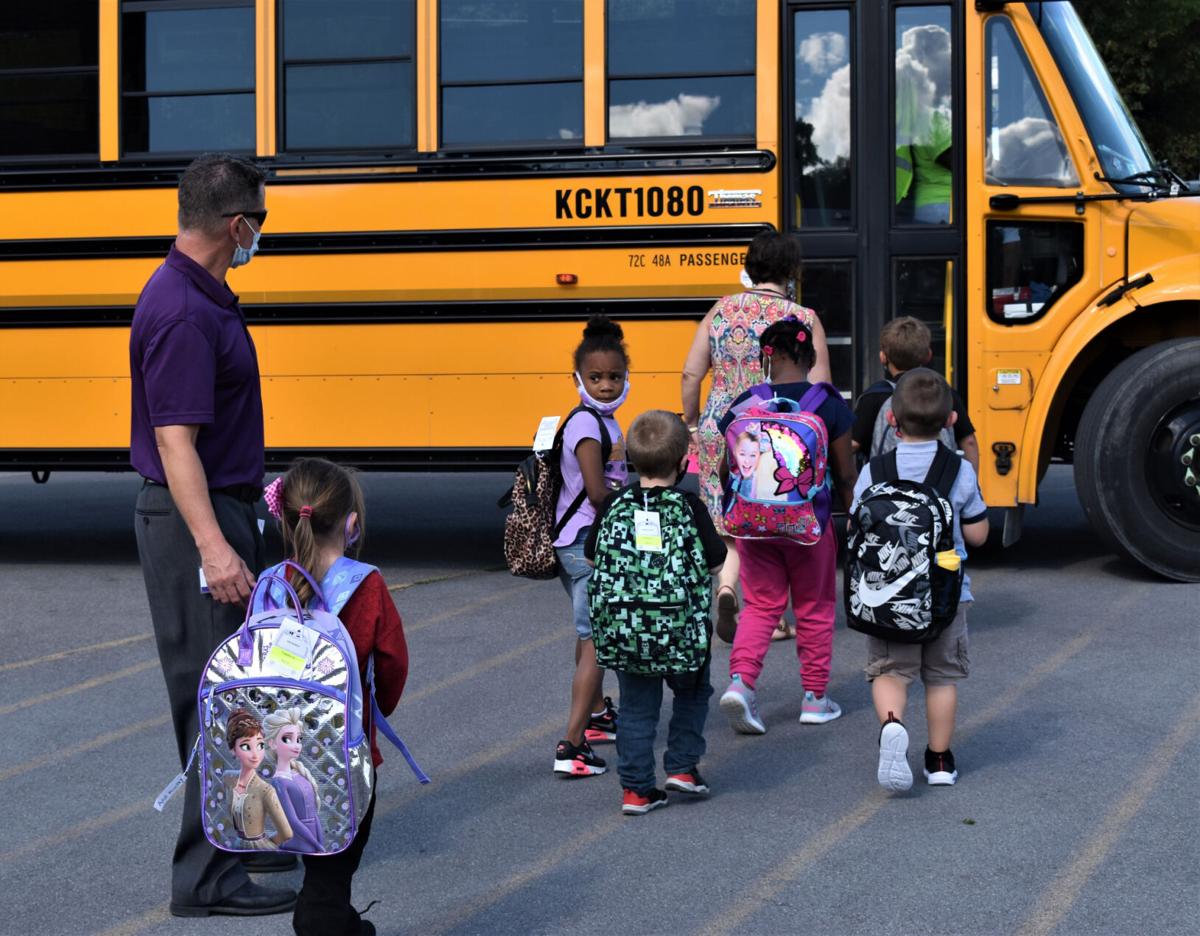 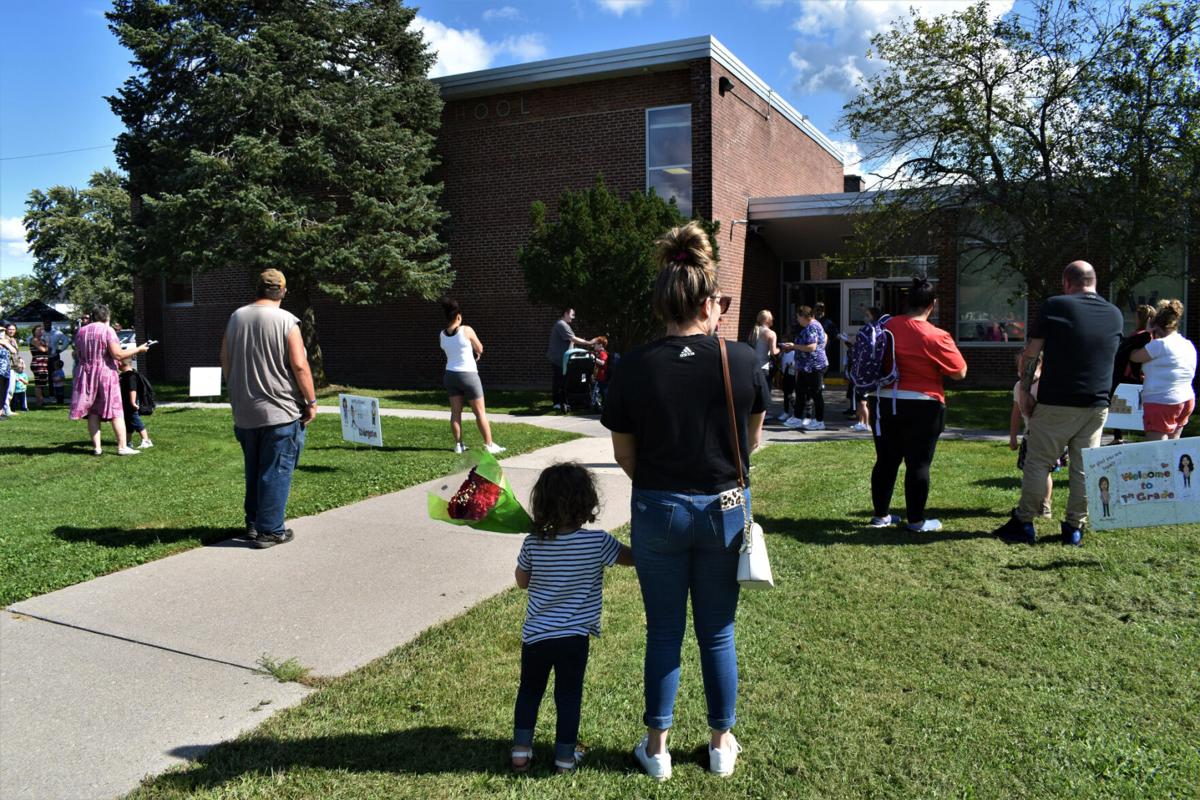 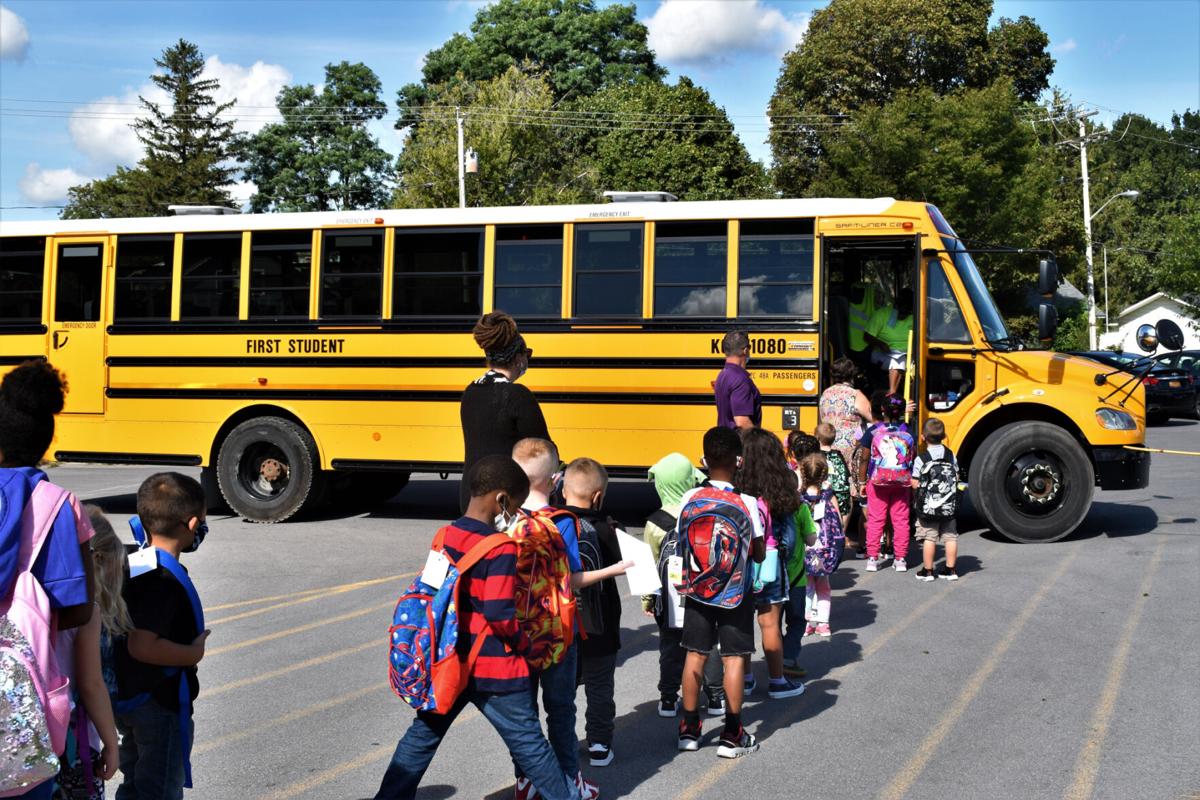 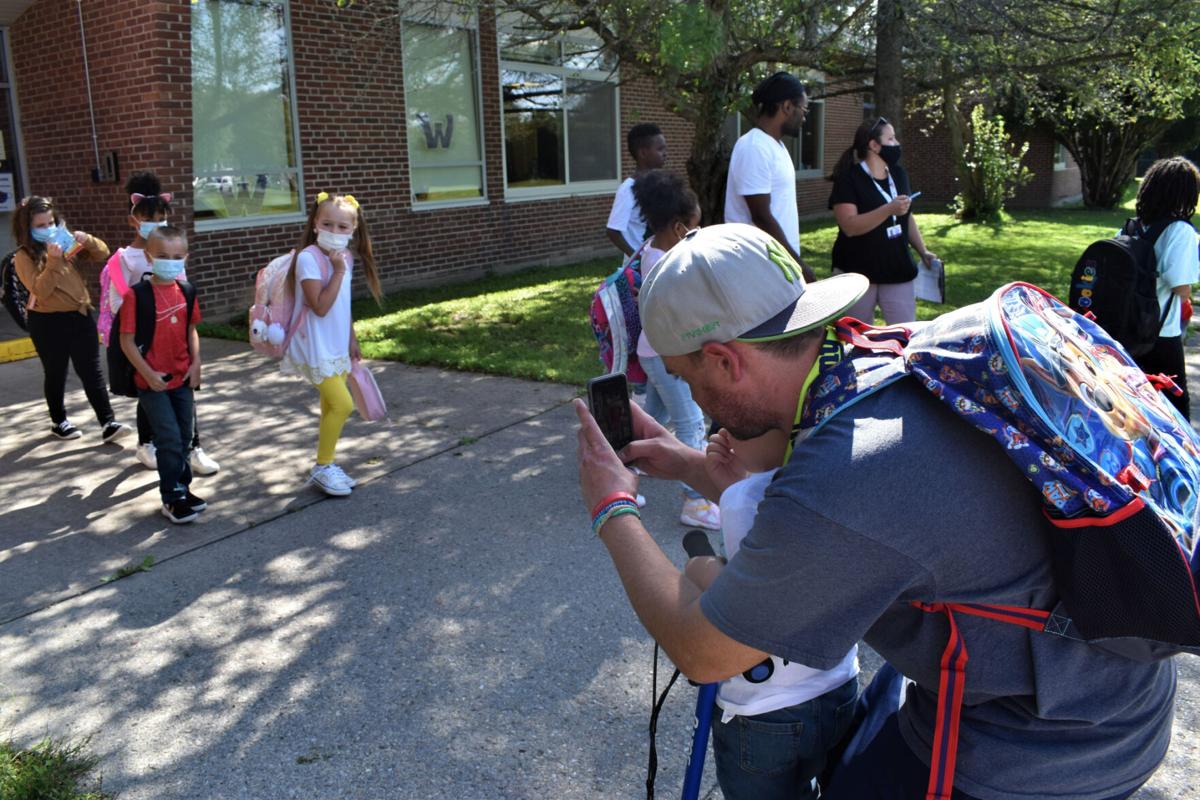 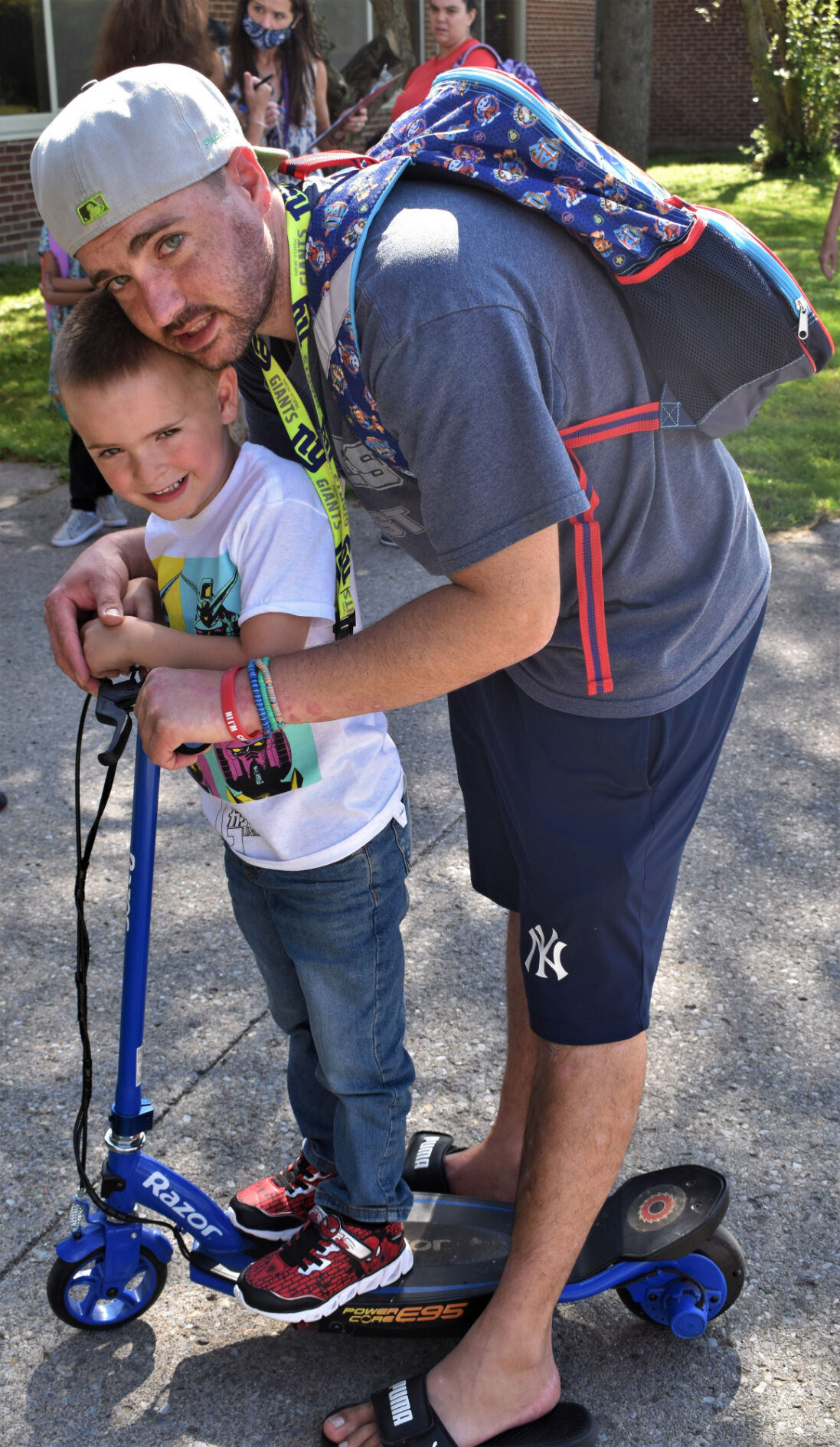 Sisters Aubrey, 4, and Alayna Walker, 6, run to hug each other outside of Starbuck Elementary School on Tuesday. Rachel Burt/Watertown Daily Times

Alayna Walker 6, holds the flowers her sister gave her outside of Starbuck Elementary School on Tuesday. Rachel Burt/Watertown Daily Times

WATERTOWN — Standing hand in hand with her mother outside of the school she will most likely attend next year, a young girl anxiously waits for her older sister with a bouquet of flowers in hand ready to greet her Tuesday afternoon.

When Aubrey Walker, 4, spotted her older sister Alayna, 6, a first-grader at Starbuck Elementary School, she couldn’t contain her excitement, running down the path to give her a hug and the flowers she had waiting for her. Having been homeschooled as a kindergartener, this was Alayna’s first day away at school, so she was just as excited to see her little sister when the day was over. Clad in a white, sparkly sweater and proudly holding her flower bouquet, she held on to her sister for a bit, smiling all the while.

Their mother, Morgan J. Walker, said Alayna was excited, albeit a little nervous heading into her first day. She noted that she had the same nerves sending her little girl to school, but she was excited that her daughter was able to go and hopes that the year will turn out well.

“It was really good,” Alayna said of her first day of school. “I made a friend.”

Her favorite part of the day, aside from her new friend, was painting, and Alayna said she was excited to go back to school the next day.

For many districts, Tuesday was the first day of school for the 2021-2022 school year, with streets lined with cars and busses full of students waiting to be dropped off at their respective schools marking the first day all of their students have returned for in-person instruction since March of 2020.

This included one of the largest districts in Jefferson County: The Watertown City School District, which serves around 4,000 students annually. Tuesday morning, Washington Street was busier than usual as the annual senior car parade took place, this year for the Class of 2022. Students were invited to decorate their cars, play music and cheer for the new school year.

Along with the annual car parade to start off the new school year for the district’s seniors, the day was full of excitement for younger grades as well.

As students trickled out of Starbuck Elementary School on Tuesday afternoon, the sun shining down on them as they were greeted by parents and guardians, a feeling of near-normalcy was in the air despite the children still being masked and socially distant. Another predominant feeling was that of hope for the year to come, with one day already marked off the calendar.

“I think the first day has gone extremely well. The students, teachers and families have been not only very supportive but also very excited,” said Starbuck Principal Michael A. Lennox. “I am confident that we’re going to be able to learn, play and grow together.”

He said that like last year, students were prepared to come in with masks, though bus drivers also helped out if anybody needed a mask prior to getting on the bus.

At Starbuck, kids mainly ate lunch in their classrooms, save for a few that sat spaced out at tables set up in the hallways outside of classrooms, allowing for more space between unmasked students while eating.

This year, Mr. Lennox said the number one priority is to keep kids in school, followed closely by making sure the school remains a safe place to be. The next step is to get the young students to be engaged and paying attention to what is being taught, but more importantly, for teachers to be able to reach them. For the most part, everything is being taught in classrooms this year except for designated times to visit art, music, the library and physical education, which is a change from just classrooms last year.

Veteran teacher Darren K. Burgess has been with the Watertown district for 29 years and Starbuck for nine. The fourth-grade teacher said he believes the kids were happy to be back in school and get back to what he hopes will be a normal routine.

“It’s gonna be a great year, we’re gonna have a very positive year,” he said. “Speaking about the school, it’s an extremely positive staff. I don’t think anything’s gonna wear us down, I think we’re gonna weather through it and come out smiling, I really do.”

With the start of a new school year came excitement over a return to full, in-person learning for many schools that haven’t had their halls and classrooms full since the pandemic began, but that wasn’t the case for the Copenhagen Central School District, which had students in person each day last year as well.

The first day of school for the 2021-2022 school year went great, according to Superintendent Scott N. Connell, and was very similar to past years, aside from things like masking and distancing. With students used to wearing masks in school, there weren’t many problems Tuesday, although some students did need to be reminded to pull their masks over their noses, Mr. Connell said.

With two gyms, one was able to be repurposed for a few periods of the day to allow for overflow of about 60 students from the cafeteria.

When COVID-19 shutdowns began in March of 2020, students began learning remotely. Some remained fully remote the following school year, while others followed hybrid instruction up until the year ended this past June.

Given that COVID-19 cases are ramping up once again and new mandates have been passed down from the state, the new year has brought uncertainty along with it.

With the goal of having kids be physically present in school each day, no remote or hybrid learning options were given to families this year in the north country, though schools do have plans for remote instruction should it become necessary.

For the Beaver River district, Superintendent Todd Green said the first day seemed like a very normal day with lots of kids in the building, just the way it should be.

“Relative to just a normal first day of school, there was nothing unusual,” he said. “The protocols that are in place, kids were doing great with them, there weren’t any challenges there. Just the small things that we have to deal with every year.”

In the district, high school lunches were split up enough to make it work so students are spread out, and in the elementary cafeteria, some more tables were added to an area that had none to accommodate more students.

“We’re gonna follow the safety protocols and those kind of things, but our focus is back on curriculum instruction and assessment,” Mr. Green said. “Essentially, we’re going slow to go fast right now — we’re making sure we’re paying attention to what kids need right now to be able to have quality learning in the environment.”

Mr. Green explained that what students missed last year were things like collaboration, cooperation, teamwork and team building, so that’s a big focus right now for the beginning of the school year.

“If I could have a smooth day like today, I would love it all the way through — every kid every day, that’s our goal,” Mr. Green said. “We’re just excited that the kids are here and we’re moving forward.”

Echoing the sentiments of other districts, Indian River Superintendent Troy Decker said his district enjoyed a “very positive opening” and is now off and running, with nothing all that noticeable to report in the way of challenges for the first day aside from the minor issues that come standard each year.

As parents came to pick up their children from Starbuck Elementary on Tuesday afternoon, both students and parents were happy to be reunited after the school day and hopeful for the year ahead.

“This is all about the kids, and it’s our goal to continue to keep kids in school learning and making it fun and helping them grow,” Mr. Lennox said. “I think over the past two years we’ve gained some different tools in our toolbox to make us better teachers, and part of that is the ability to use different resources. I think we’re in a good position to continue to help our kids grow and learn.”