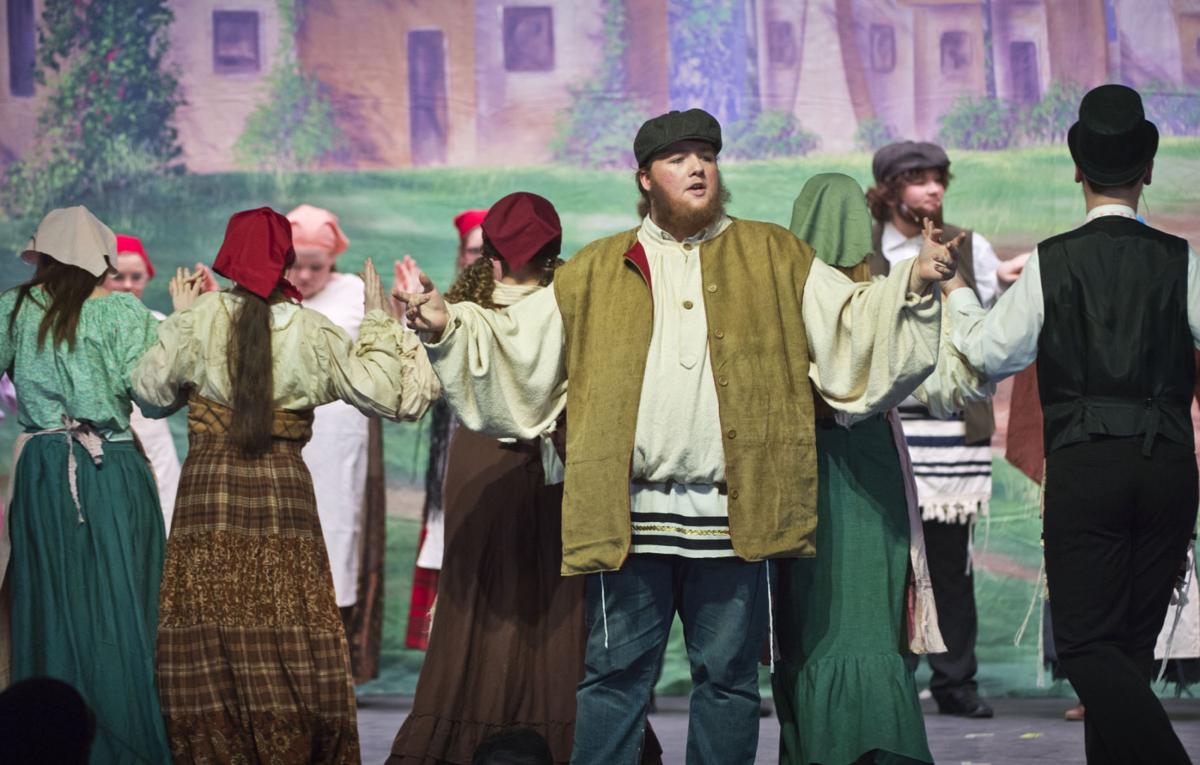 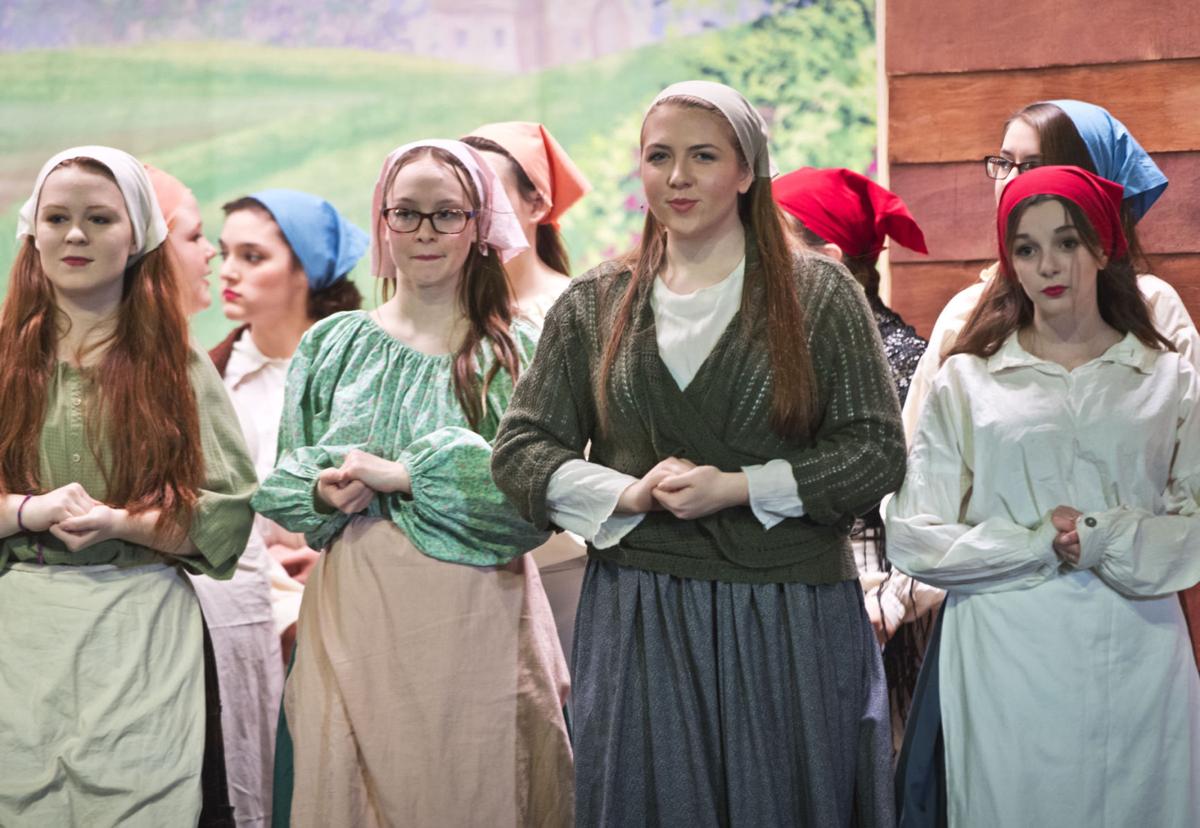 Mammas from left, Kassy McGinnis, Emmah Hayes, Makenna King as Golde, and Lucie Burns in the opening scene of Norwood-Norfolk’s presentation of “Fiddler on the Roof.” Christopher Lenney/Watertown Daily Times 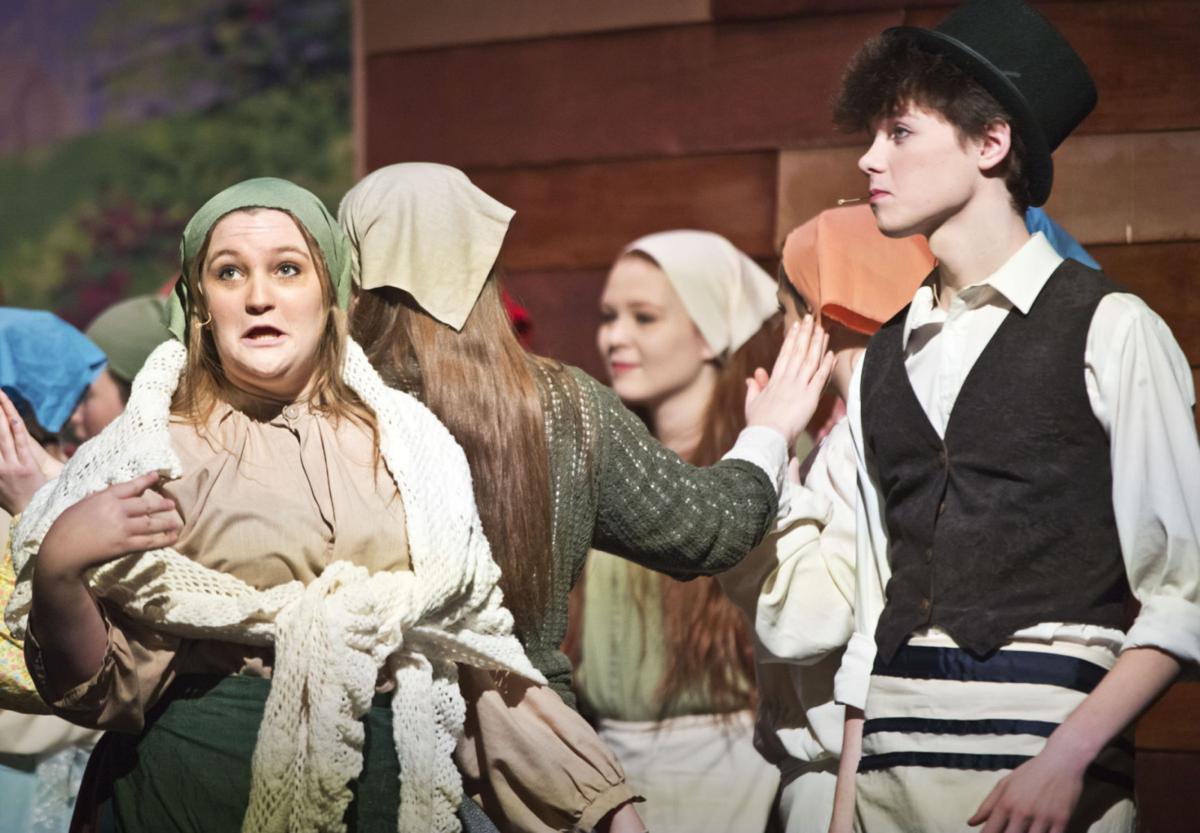 Mya Colbert as Yente, the matchmaker, left, talks with Ethan King as Avram in rehearsals for Norwood-Norfolk’s presentation of “Fiddler on the Roof.” Christopher Lenney/Watertown Daily Times 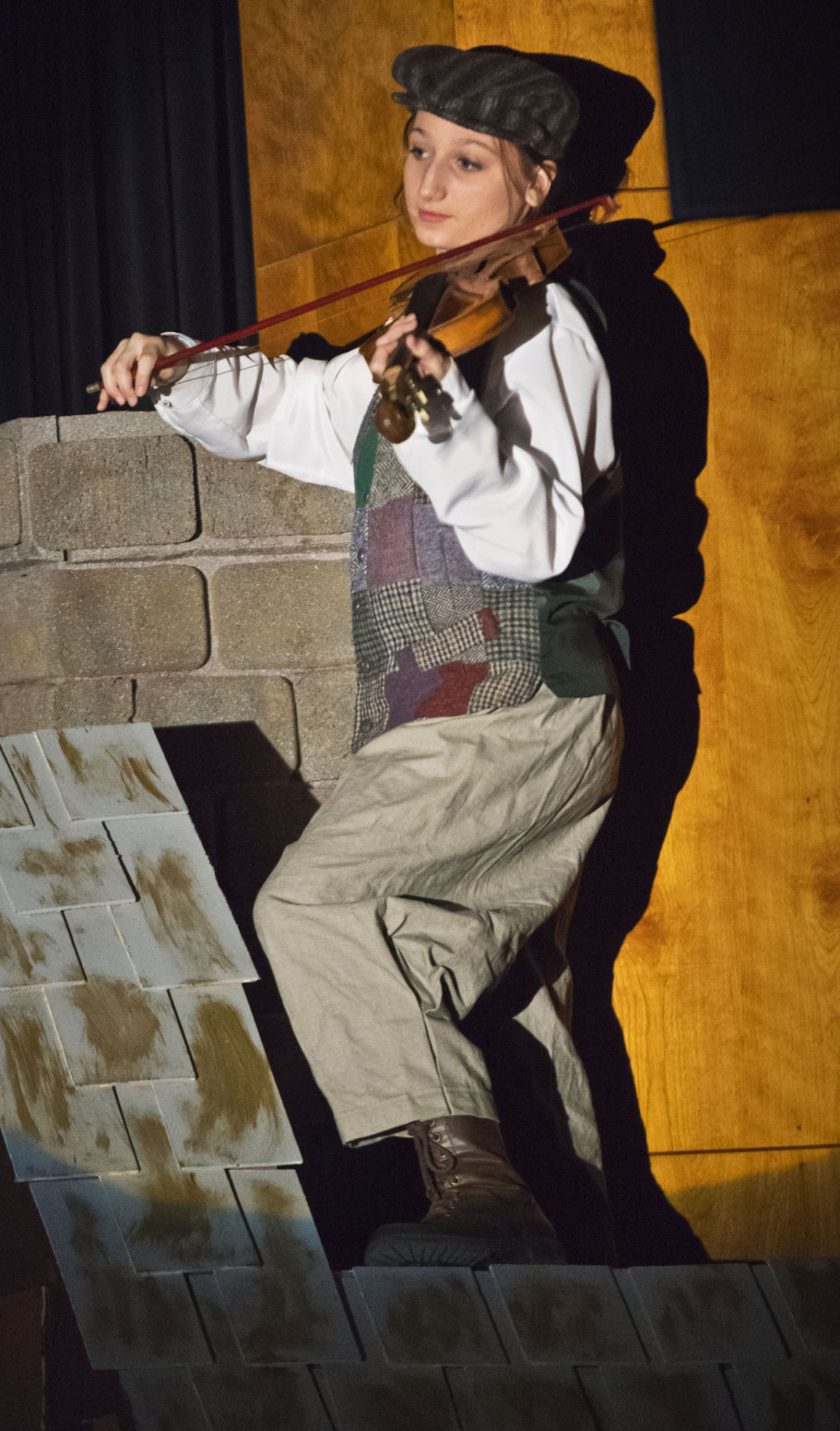 Lauren Sweet is the fiddler in Norwood-Norfolk’s presentation of “Fiddler on the Roof.” Christopher Lenney/Watertown Daily Times

Mammas from left, Kassy McGinnis, Emmah Hayes, Makenna King as Golde, and Lucie Burns in the opening scene of Norwood-Norfolk’s presentation of “Fiddler on the Roof.” Christopher Lenney/Watertown Daily Times

Mya Colbert as Yente, the matchmaker, left, talks with Ethan King as Avram in rehearsals for Norwood-Norfolk’s presentation of “Fiddler on the Roof.” Christopher Lenney/Watertown Daily Times

Lauren Sweet is the fiddler in Norwood-Norfolk’s presentation of “Fiddler on the Roof.” Christopher Lenney/Watertown Daily Times

NORFOLK — Norwood-Norfolk Central School seniors who are participating in this year’s musical will be going out in a big way with their farewell performances.

They’re part of the cast for “Fiddler on the Roof,” which features more than 100 middle and high schools students, as well as some elementary students participating in cast and crew.

“We have a large number of insanely talented seniors who will be giving their farewell musical performance here at NNCS,” Superintendent James Cruikshank said.

Among the seniors is Gordon Hall, who plays Tevye, a poor dairyman who struggles to find balance between the traditions of his religion and culture and the changing world around him.

“Tevye is a dad of five daughters and has a wife that he loves, but there isn’t really a relationship. He loves his daughters more than anything,” Mr. Hall said. “He has some funny parts, but he also has some serious parts.”

This will be the second time on stage for Mr. Hall, who transferred from St. Lawrence Central School.

“I did ‘Guys and Dolls’ last year. The year before that, I was in the pit for Brasher’s musical,” he said. “I’ve always liked music and I’ve always been in the music department area, but I didn’t start doing musicals until two years ago when I was in the pit. Last year I was new to this group because I went to Brasher.”

Mr. Hall said Tevye wasn’t a role he specifically auditioned for. To prepare, he has watched the movie, as well as clips on YouTube.

“I didn’t really want any particular role. I just kind of went into it. I just went into the auditions hoping I’d get a role,” he said.

And now that he has one of the lead roles, “it is a lot of lines. I don’t really have all my lines memorized right now. I have most of them, like 99 percent. There are always growing pains. I think it will all be worth it in the end.”

“This is my fifth musical. My first musical was ‘Annie.’ I’ve been going ever since,” she said. “This is the largest role I’ve had. This will be my senior year and it will be cool to go out with a bang.”

Ms. King, who is also the Class of 2020 salutatorian, said she was “super excited” when she learned that she had landed one of the major roles.

“I was just not expecting it at all. We just audition. Usually we’re hoping for something, but we usually don’t audition for certain roles. You wait and wait until the cast list goes out,” she said.

There are differences between her role in last year’s production of “Guys and Dolls” and this year’s “Fiddler on the Roof.”

“Last year I had a lot of dancing. This year it’s going to be the opposite — not much dancing, but mostly lines. I have to convey my character through my lines,” Ms. King said.

She said she has been able to do that with the help of the directors.

Ms. King plans to pursue a career as a teacher. But, for now, her focus is on her final show at the school.

“When I started, I was the youngest grade. I was toward the younger end of the cast. It was a very small number of young people. The older folks kind of led us. They were examples,” she said. “Now there’s a younger cast. It’s cool to see that as a large group about to leave, there’s also a large group coming in to fill the places. I’m going to be sad to leave the stage that I’ve known for five years, but I’m moving on to college and I have confidence in the people that I’m handing the torch off to.”

Senior Emily Jarvis will play her last role at Norwood-Norfolk this year. She has participated in seven shows during her school career.

“I am Hodel this year, the second oldest daughter. She falls in love with Perchik (Matt Frost) after a little bit of time in the show. Then she goes away to be with him,” she said. “It’s been a pretty good role. I’ve played a lot of different roles in my seven years. Last year I had a pretty big part, and the year before that and the year before that. I’ve had pretty good parts the last four years.”

Ms. Jarvis said she became interested in the musical productions after watching one.

“I had a friend whose older sister was here in a show. We came in for the day to watch the show during the school day. I thought, ‘That’s so cool. I really want to do that,’ so I did the next year,” she said.

She remembers being young and shy not knowing what to do, but some of the older students took her under their wing.

Now, as a veteran of the stage, she knows the secret to success.

“It’s a lot of looking over your script, always being prepared and always asking questions. It’s not just doing what you’re told,” she said.

Ms. Jarvis’s advice to others is, if being part of the production looks like fun, give it a go.

“Definitely try it. If you don’t like it, that’s OK, it’s not for you. But at least try. It’s a fun experience. You get to be around people that like the same thing as you,” she said.

“Fiddler on the Roof” will be staged at 7 p.m. Friday and 1 and 7 p.m. Saturday in the high school auditorium.

Tickets are $12 for adults and $8 for students and children.