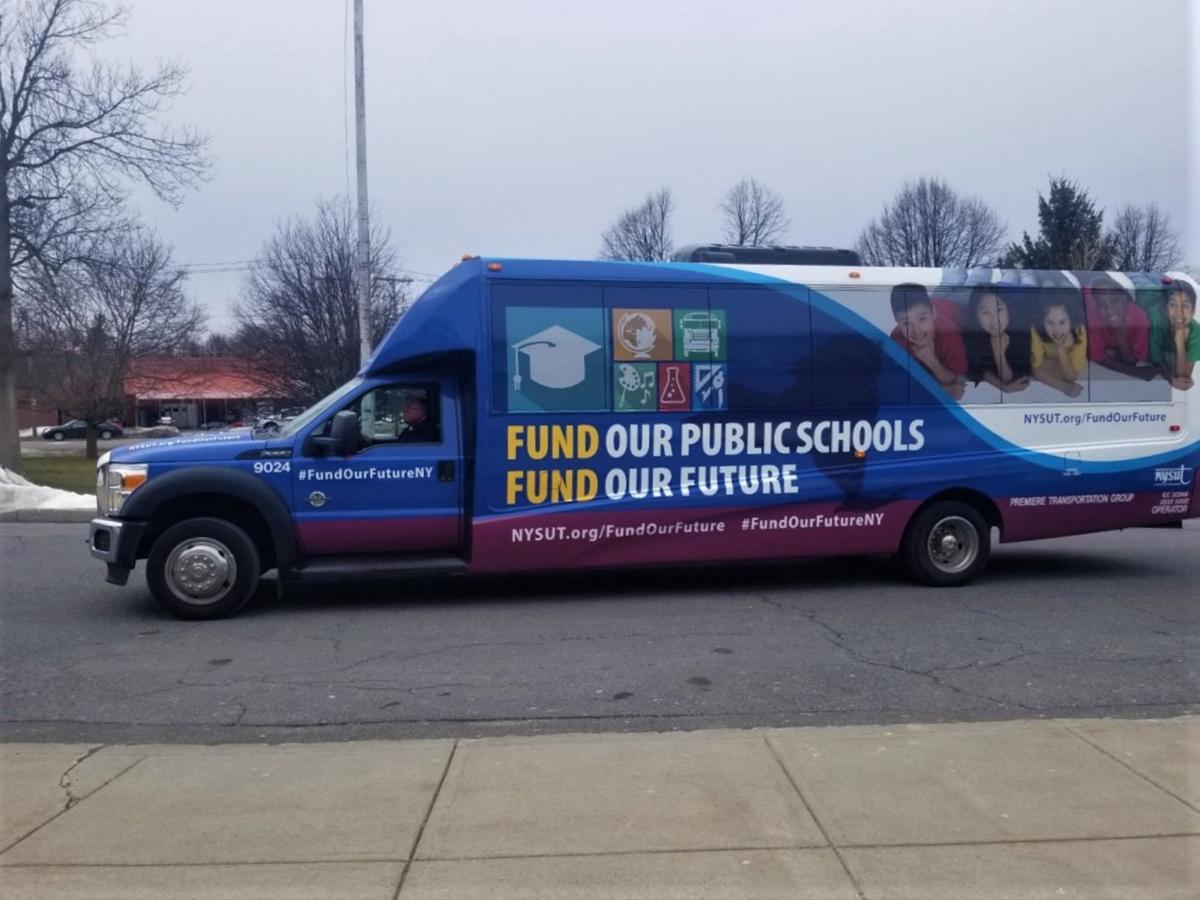 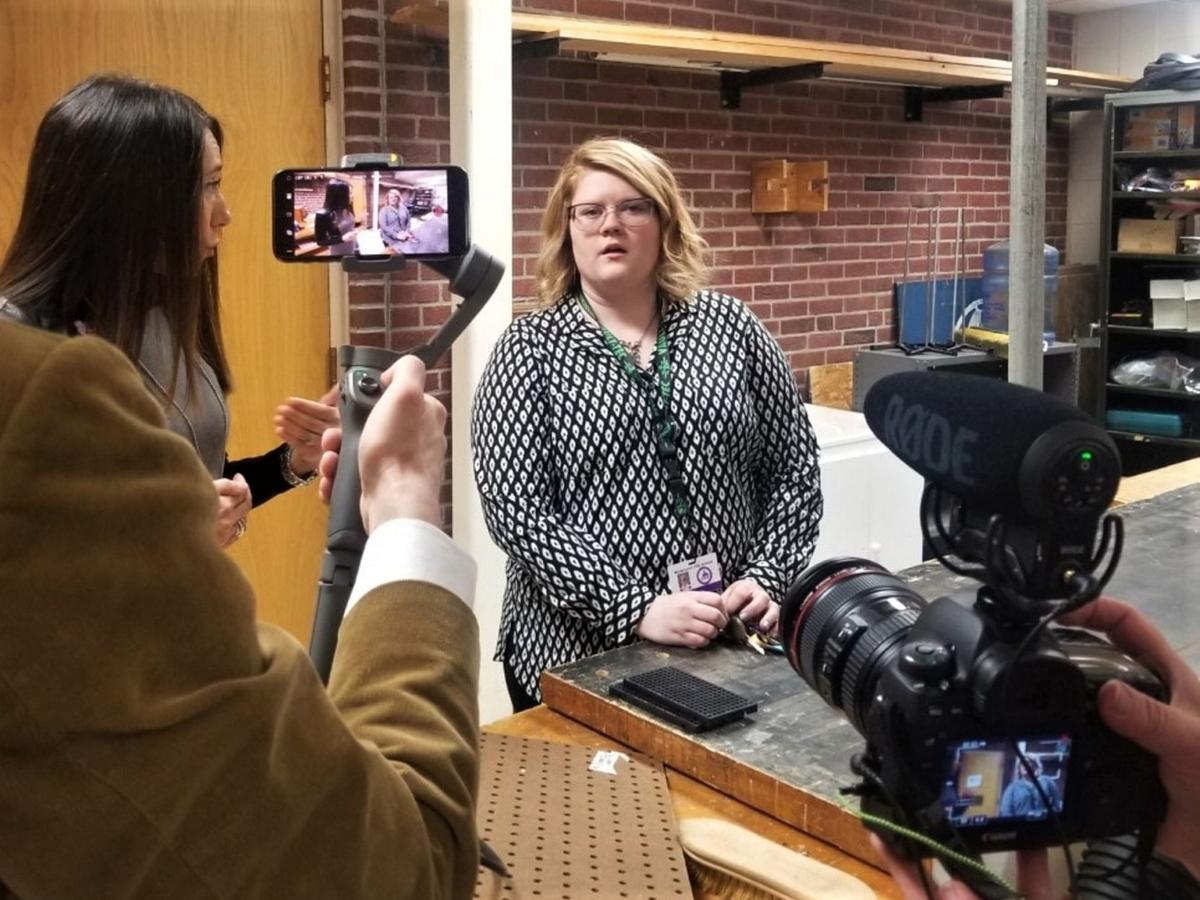 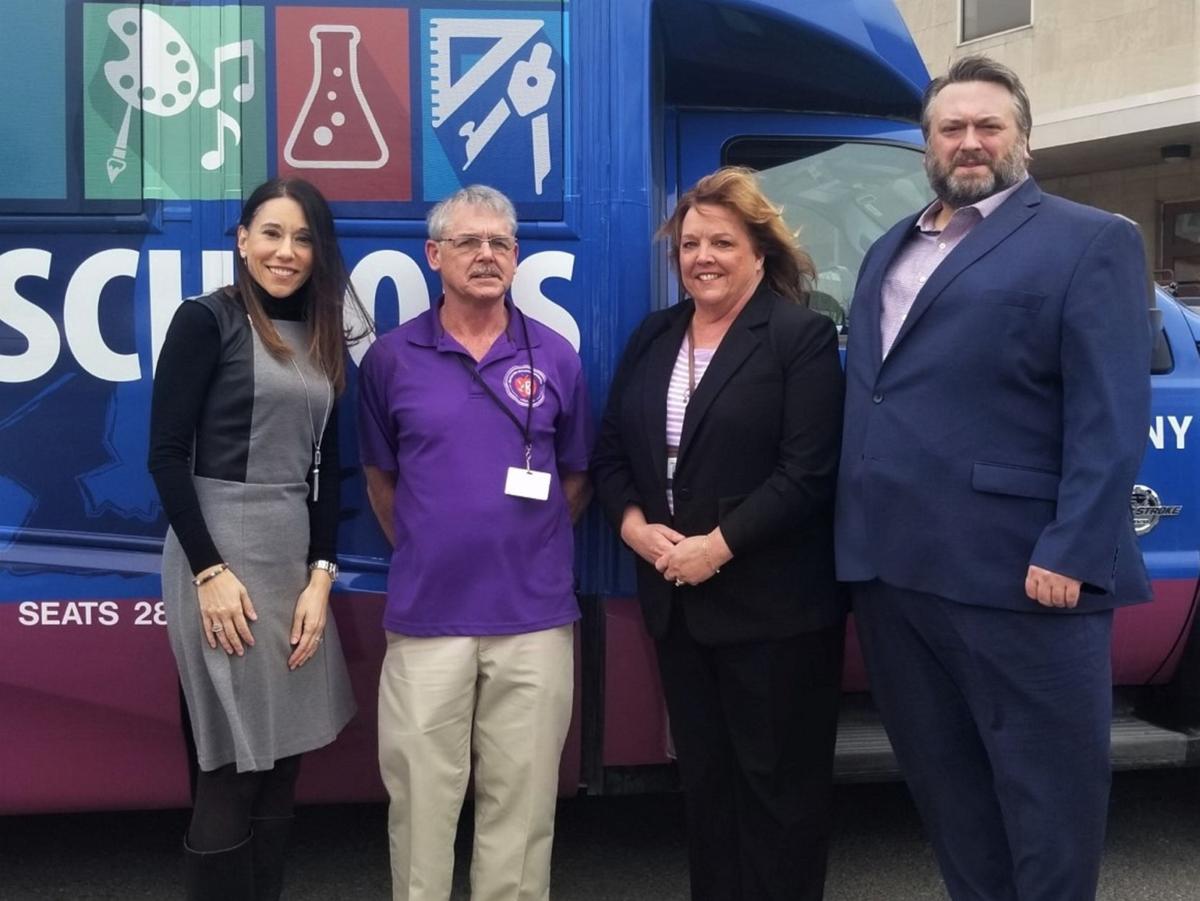 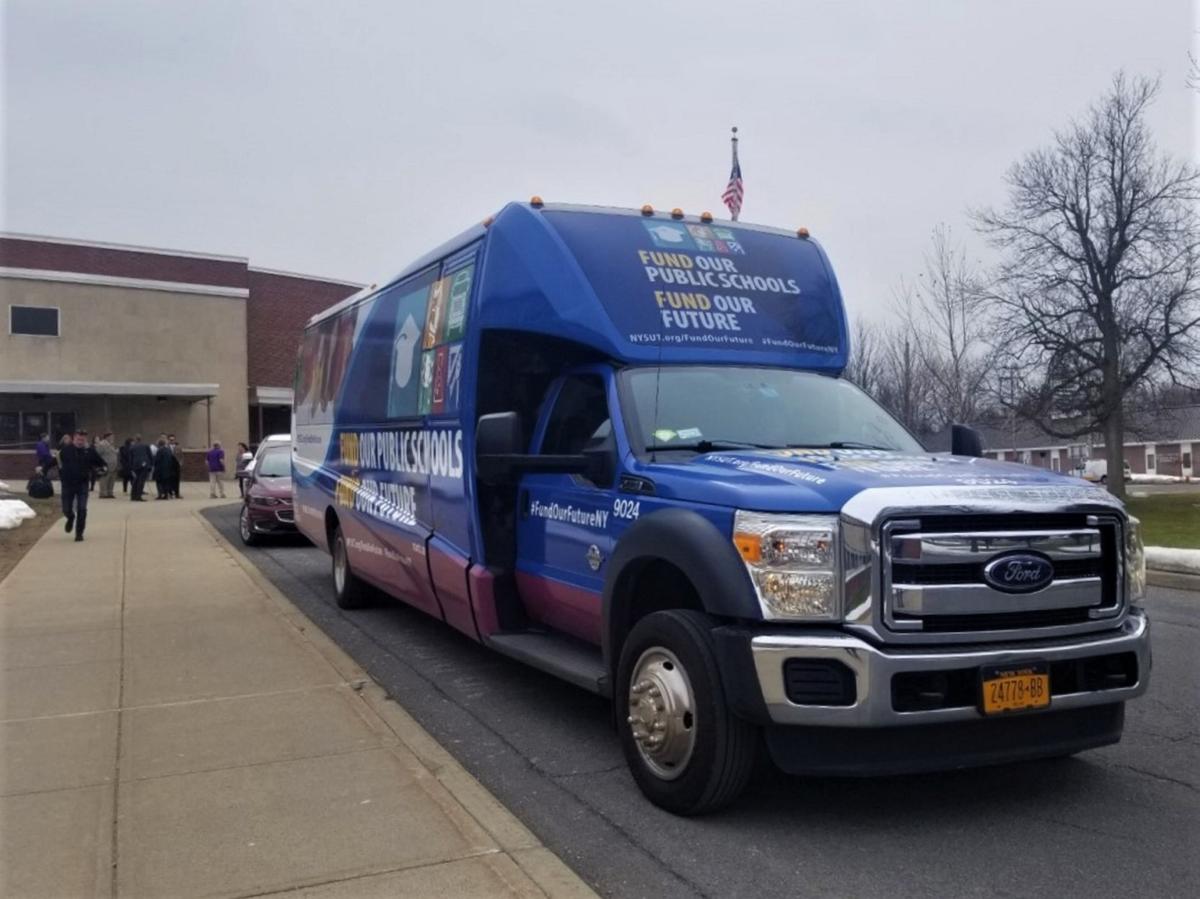 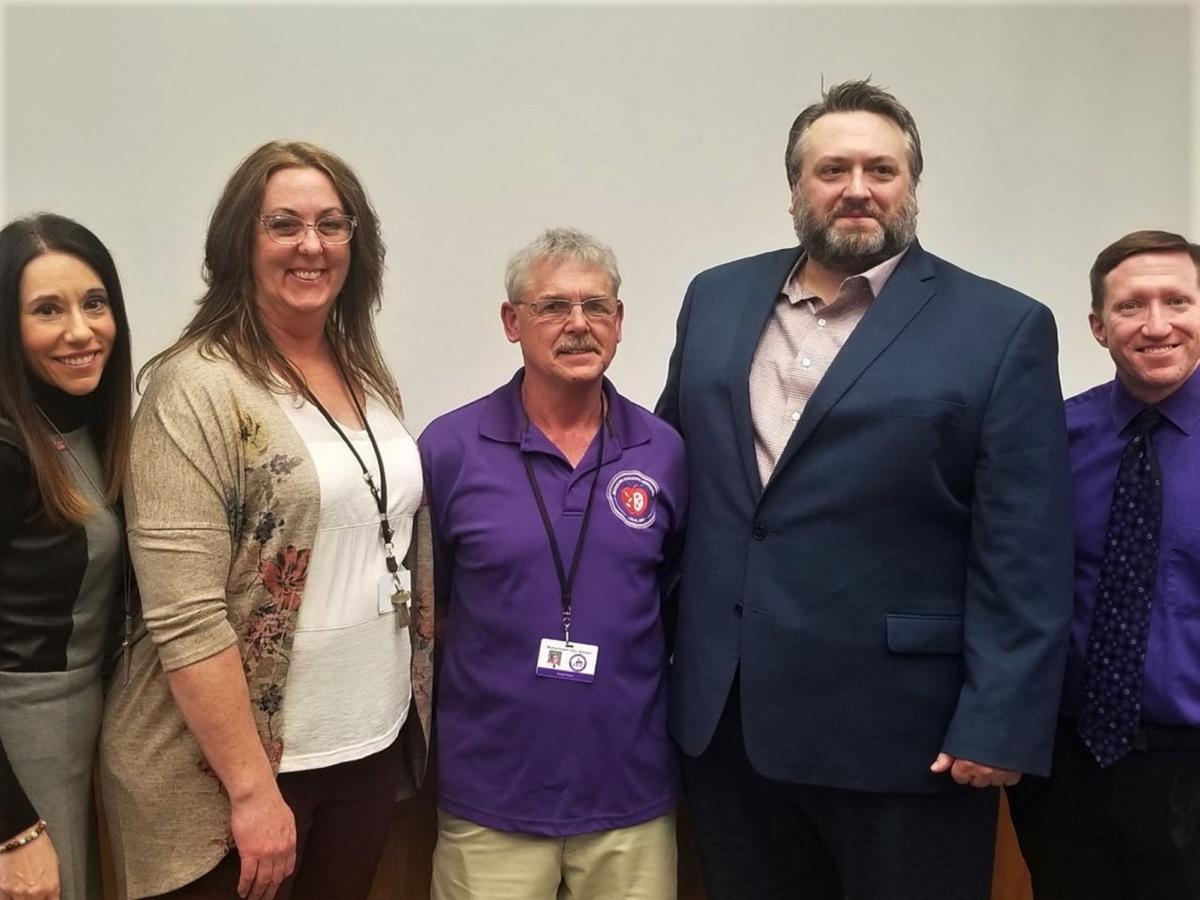 From left, Jolene DiBrango of NYSUT, Christine Sutton of the WCSD, Richard Morris of the WCSD, Don Carlisto of the American Federation of Teachers, and Kevin Todd of the WCSD pose for a photo during NYSUT’s “Fund Our Future” bus tour. Rachel Burt/Watertown Daily Times 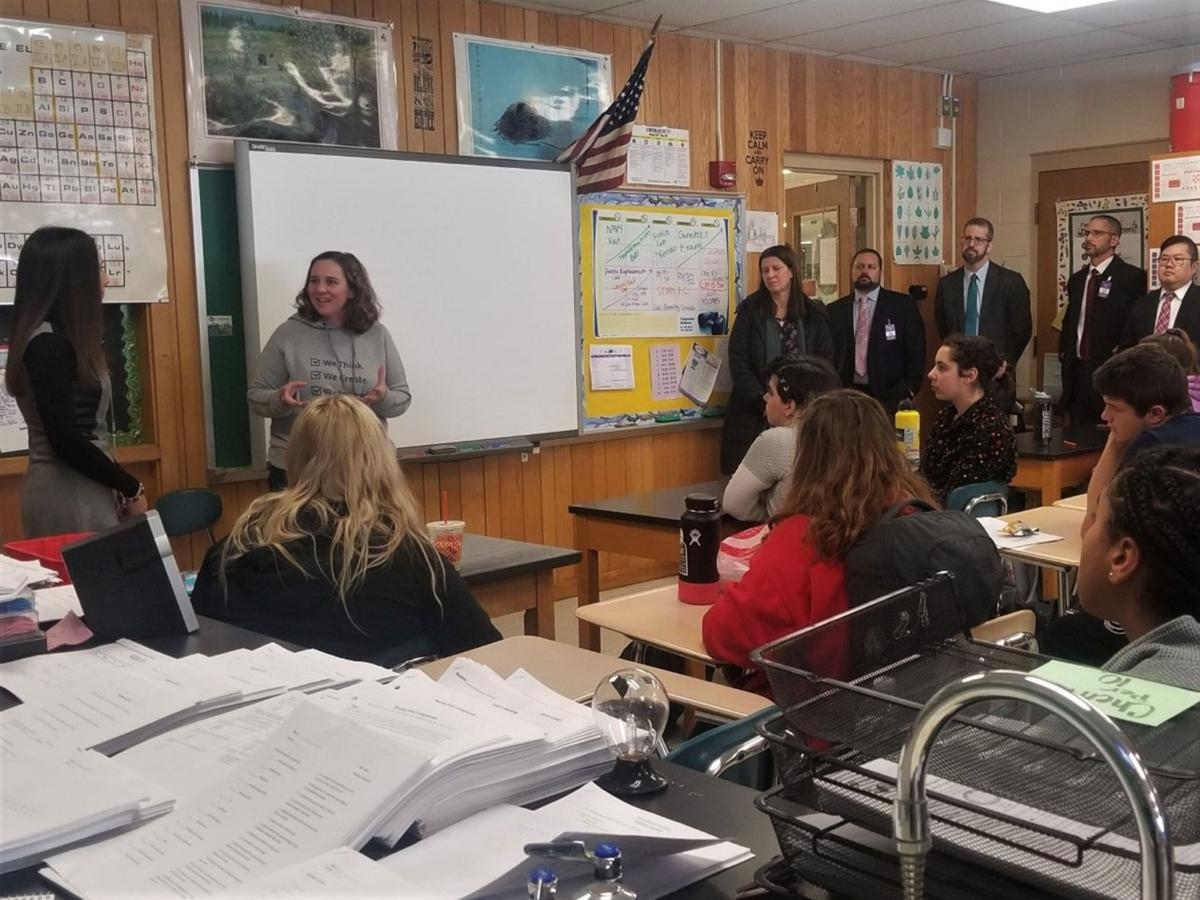 From left, Jolene DiBrango of NYSUT, Christine Sutton of the WCSD, Richard Morris of the WCSD, Don Carlisto of the American Federation of Teachers, and Kevin Todd of the WCSD pose for a photo during NYSUT’s “Fund Our Future” bus tour. Rachel Burt/Watertown Daily Times

The goal of the tour is to draw attention to the impact a lack of state funding has had on schools statewide. Union activists also highlighted the need for new revenues that will enable the state to tackle educational inequality and other pressing needs.

According to a ruling on the Campaign for Fiscal Equity, New York’s highest court ruled that the funding formula was unfair and ordered the state to fix the problem. This was 14 years ago.

“Watertown is owed nearly $11 million, that’s an extraordinary amount of money for this community, and all the communities we’ve visited are owed millions of dollars or hundreds of thousands of dollars,” said Jolene DiBrango, NYSUT executive vice president. “There has been a consistent theme which is that the students that we are teaching here in New York State are not having their needs met.”

Mrs. DiBrango and other NYSUT officials joined local union leaders, administrators, fellow educators and elected officials for a tour of Ohio Elementary School at 10:30 a.m. to hear firsthand about the issues caused by underfunding that Watertown schools are facing and then visited Watertown High School for a tour beginning at noon.

As the state budget has taken shape, NYSUT’s “Fund Our Future” bus tour has visited school districts around New York that, like Watertown, have been underfunded by the state.

“Everybody knows that education is the great equalizer,” said Richard Morris of the Watertown City School District. “Our students are so underfunded that they don’t have a chance to compete with students from more affluent districts and our kids are just as important as kids from the richer school districts.”

The first stop on the tour of Watertown High was tech teacher Sarah Loudon’s classroom in the lower level of the school. A graduate of SUNY Oswego, this is her first teaching job out of school.

“If we had the full funding, we’d be able to have machines that are up-to-date or functioning — a lot of them aren’t functioning right now just because things are so expensive and they’re tough to maintain,” she said. “It’s almost unfair that students don’t get the opportunity to really do this and I have so many kids that are interested, and I think it impacts them that they don’t get that full education and they may miss out on a job opportunity or interest.”

In AP Biology teacher Jennifer Akins’ classroom, the students had a few more minutes to relax before taking their exam while the NYSUT team came to visit.

Mrs. DiBrango took a moment to address the students before hearing from their teacher, telling them NYSUT was in the school to fight for them to have the resources they need.

“We need to hear from your teachers about what it would mean if you had that money so we can get a picture for the legislators on what it is they should be doing to represent your parents and yourselves,” she said. “We’re here to fight with your teachers and your administrators for full funding.”

AP Biology is an expensive course; one of the reasons for this is because new materials must be purchased every year since many materials cannot be reused after a lab.

After explaining to those gathered in the classroom the struggles of funding for her curriculum, Ms. Akins turned and spoke to her students and asked how many would be interested in a career in the medical field. About half of the students raised their hands.

“This year the AP curriculum actually changed, they took out all of human body systems, so really AP Biology helps them in their prerequisites, but how many of you would be interested in anatomy and physiology?” she asked as the same students raised their hands. “We can’t offer that course, we just don’t have enough teachers and that probably would be more beneficial to them, and if you look at our area there’s a huge need for medical professionals.”

NYSUT, as a member of the New York State Educational Conference Board, is calling for a $2.1 billion increase in state aid in the 2020-21 state budget, which includes the first installment of a three-year phase-in of the more than $3.4 billion in Foundation Aid owed to more than 400 school districts around New York.

In order to generate the revenue needed to fully fund public education, in addition to other state services like public higher education and health care, NYSUT is supportive of new taxes on billionaires and ultra-millionaires.

“One thing we’re really hopeful about is the fact that all of the communities that we visited are supportive of making sure that their students and their children have what they need in our public schools,” Mrs. DiBrango said. “We’re very committed to finding revenue streams here in New York, which we believe is possible, to make sure that our schools are fully funded and we’re really looking for our legislature to step up this year and to make sure that this happens because this has been years and years of these schools being underfunded.”

At Ohio Elementary School, educators said full funding would go a long way toward addressing student mental health and early intervention issues, as well as bolstering school safety. At the high school, underfunding has led to a lack of elective courses and insufficient STEM course offerings.

“I think it’s amazing that our local leadership somehow got people from outside of this area to come and really see firsthand where we’re lacking and what we need,” said Patricia LaBarr, superintendent of schools for the Watertown City School District.

“We’re not asking for more, we’re asking to put our kids on a level playing field with the rest of the nation.”

District wide, underfunding has an impact on teacher recruitment and the district’s ability to meet various state mandates and special education needs.

“We’re very grateful to the Watertown community for letting us into their schools and sharing their stories,” Mrs. DiBrango said. “We hope everyone in the community, including the legislature and the governor, listen the stories of these families across New York state and realize now is the time to fully fund our future in terms of those kids.”