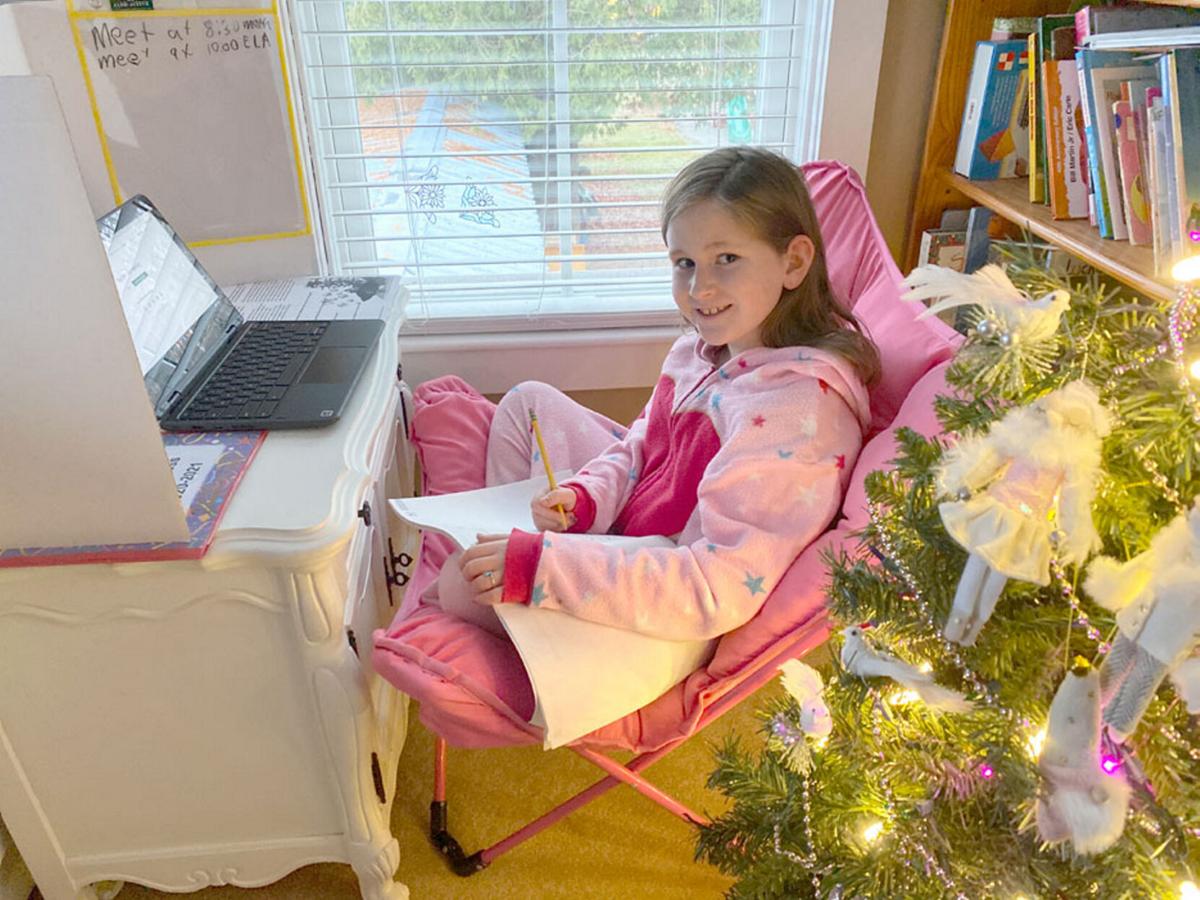 Aine Kline chills out in her pajamas and comfy chair as she attends third-grade classes remotely from her home in Bloomingdale last week. Franklin County schools will likely be remote until at least Jan. 4. Photo courtesy of Melissa Kline 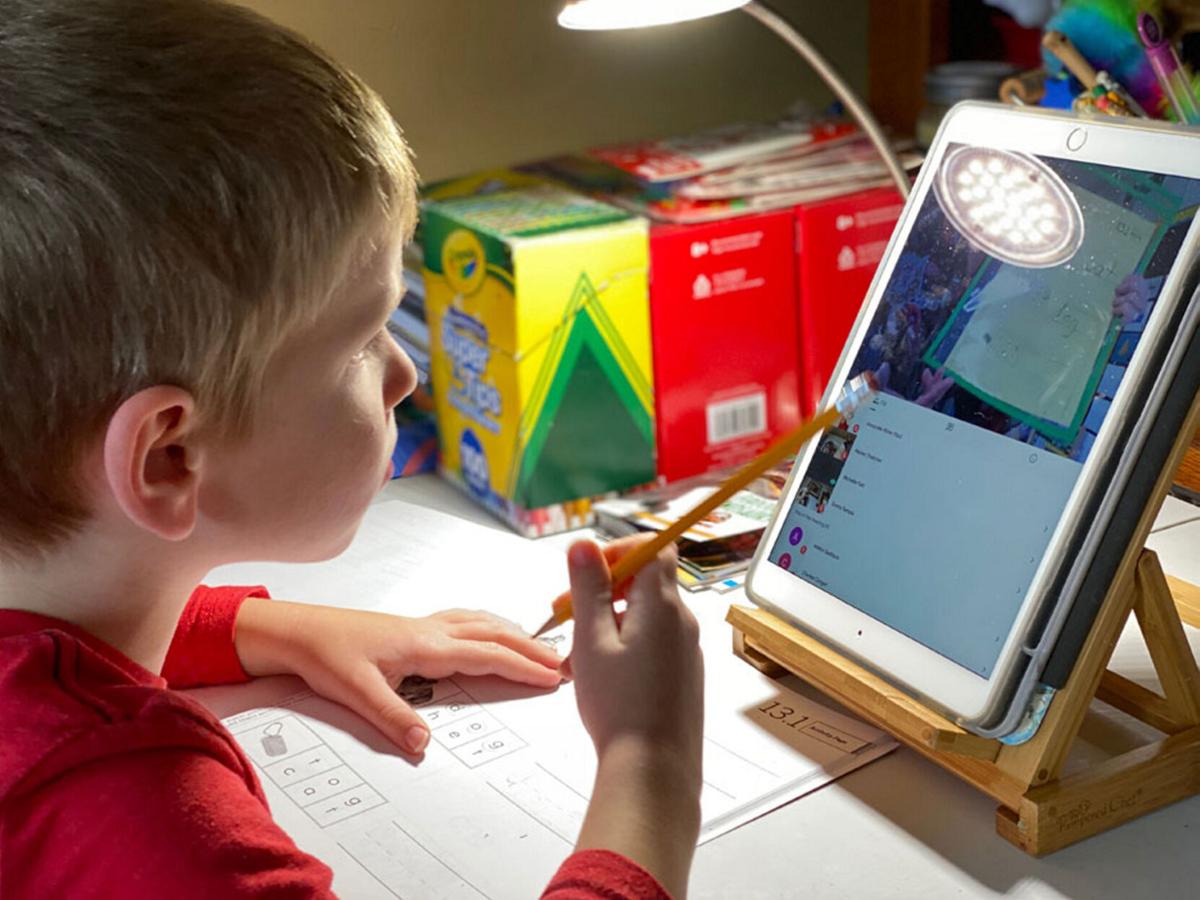 Alex Kline follows along intently as his kindergarten teacher leads class remotely for the first of many school days last Monday. Franklin County schools will likely be remote until at least Jan. 4. Photo courtesy of Melissa Kline

Aine Kline chills out in her pajamas and comfy chair as she attends third-grade classes remotely from her home in Bloomingdale last week. Franklin County schools will likely be remote until at least Jan. 4. Photo courtesy of Melissa Kline

Alex Kline follows along intently as his kindergarten teacher leads class remotely for the first of many school days last Monday. Franklin County schools will likely be remote until at least Jan. 4. Photo courtesy of Melissa Kline

It was their first day of remote-only learning, along with the rest of students in Franklin County schools, but despite the strange circumstances and challenges — or perhaps because of them — Melissa said they were looking forward to seeing their friends on the screen while attending class virtually.

“I’m sure that will wear off, though,” she said.

She has a range of grade groups to navigate. Her oldest, Thomas, is in eighth grade. Her younger two — Aine in third-grade and Alex in kindergarten — attend Bloomingdale Elementary School.

“My kids really have adjusted pretty well, surprisingly,” Melissa said. “They don’t mind the masks. They don’t seem to mind this transition, either.”

“Today being the first day I really spent the day running from room to room because they all insisted on having their own designated spaces,” she said. “I probably put on 6 miles today.”

Melissa is an architectural engineer running her own company, Maple Lane Design and Drafting, from home.

“I work from home already, so I know I’m lucky that way,” she said. “I know some people aren’t as lucky. They are dealing with having to leave home and find caregivers for their kids.

“I’m appreciative, but at the same time it’s very challenging because I still have work I have to get finished.”

That means adjusting her hours. When she finishes working with her kids on school at 2 p.m., she will start doing her job until around 10 p.m.

She said her husband Ben, who works at American Management Association, may have to come back home on some days to cover for her when she has meetings out of the house.

Melissa is unsure how sustainable this model is for her and parents like her.

“I’m praying to God that they go back to school in person in January,” she said. “But that’s probably not likely to happen.”

She said the first day was a learning experience for everybody and that there are improvements to be made on everyone’s end.

She said she’s had to be near Alex, her kindergartner, nearly the whole time, as he needs more in-person prompting to keep class moving.

“The kindergartners, they haven’t quite figured out the mute button. All the little kids were trying to talk at the same time, and it was like this scary movie echo sound,” Melissa said. “I think there’s just some things that have to get worked out in the next few days.”

In all the chaos, she is not sure how much Alex got out of the lesson Monday.

“I think that it will get better,” she said. “I don’t think it was the teacher’s fault. I think it was just new technology for little people is hard.”

That teacher has suggested pre-recording lessons, and Melissa supports that because it would allow her to focus on her other two kids when they are live. On Monday, she said she was working with Alex and texting Thomas to make sure they are both on track at the same time.

She is making changes on her end, too, to make each day easier.

“I think I need a giant calendar on the wall to show what time every kid has to be logged in,” Melissa said.

She also said she is scheduling in time for art and other topics schools are focusing less on this year, and plans to stock up on art supplies for home.

“I feel like those things will get missed if we don’t plan it, because they’re not actually scheduled by the school,” Melissa said.

Though remote schooling this year began on a chaotic and seemingly unsustainable note, Melissa said she is confident things will get better over time.