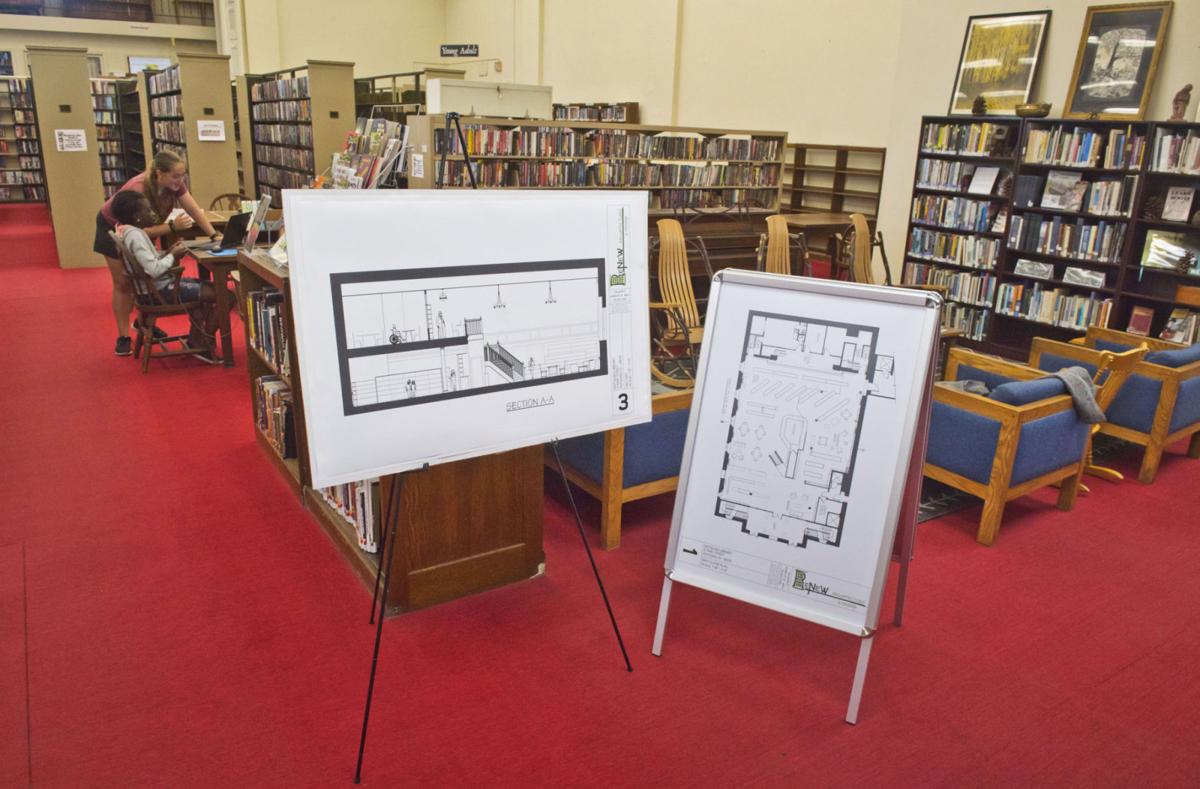 Displayed at the front entrance of the Potsdam Public Library, August, 12, are plans for the renovations and addition of a mezzanine. Christopher Lenney/Watertown Daily Times (Eckert) 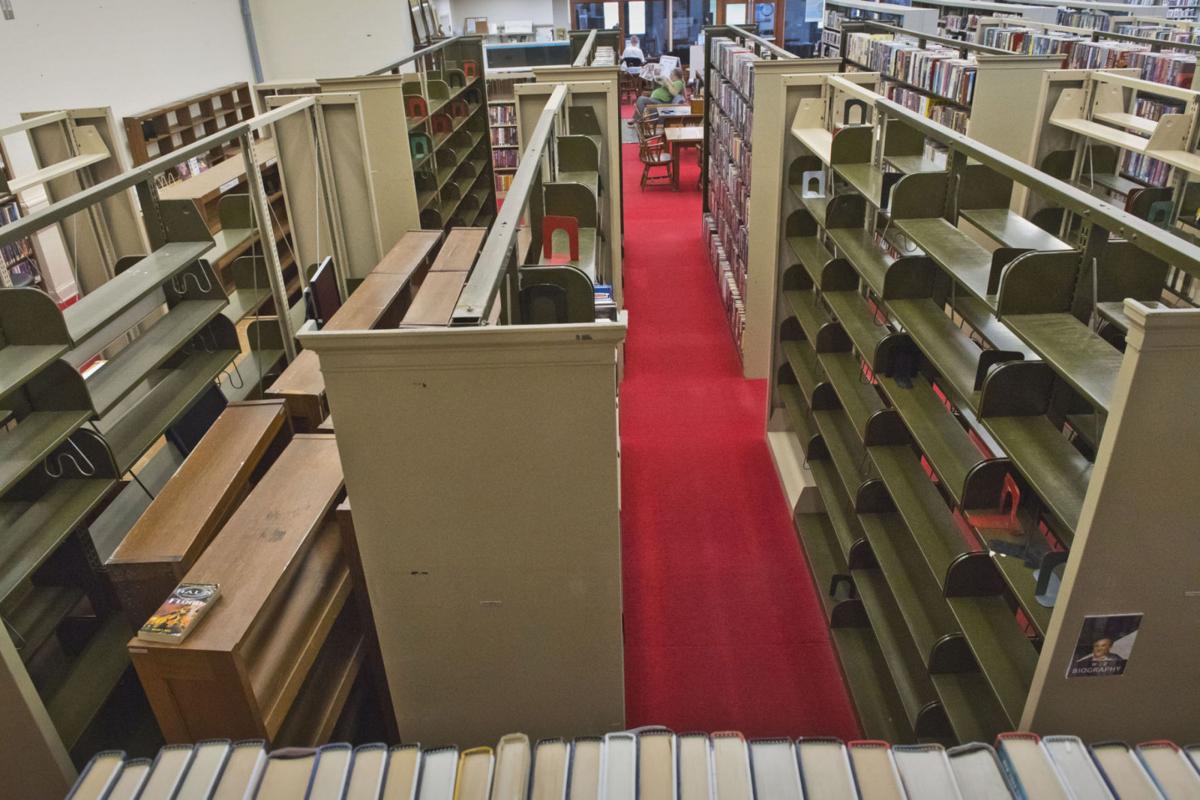 Books have been removed and shelving shuffled around the Potsdam Public Library in preparation for renovations and addition of a mezzanine. Christopher Lenney/Watertown Daily Times 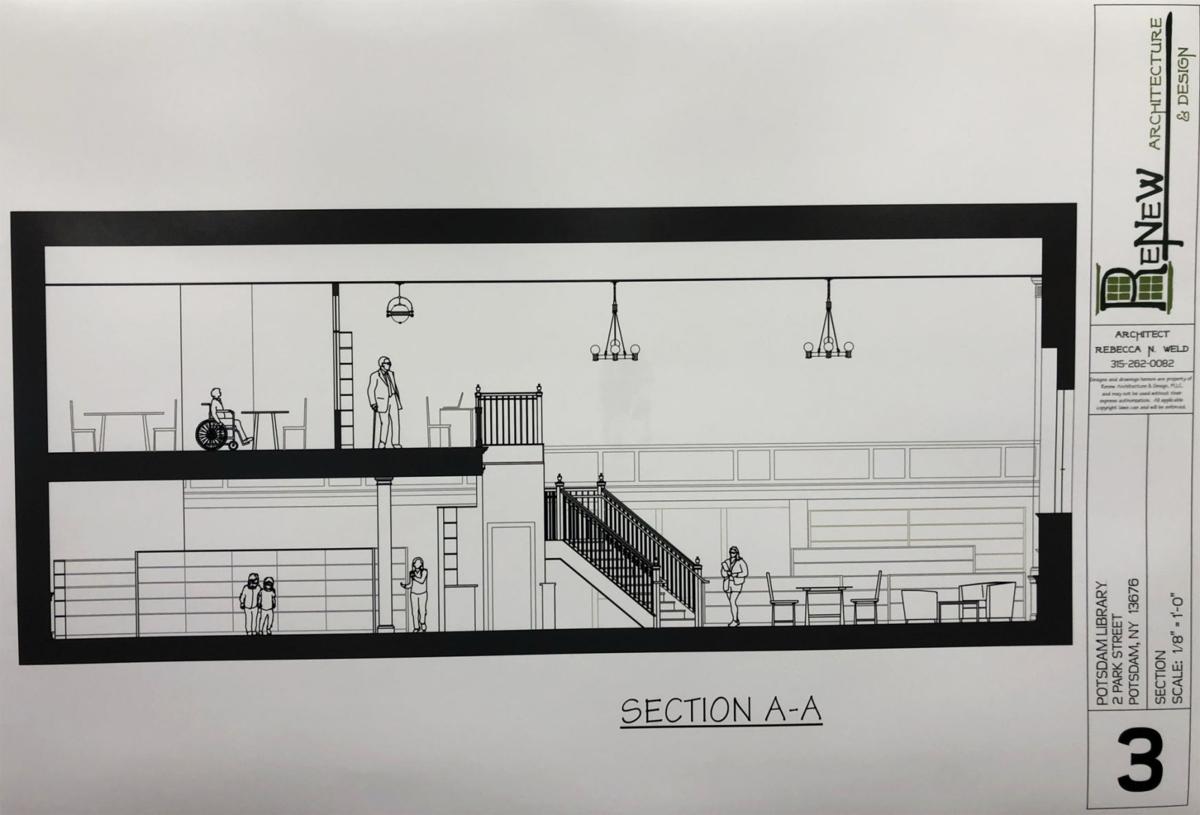 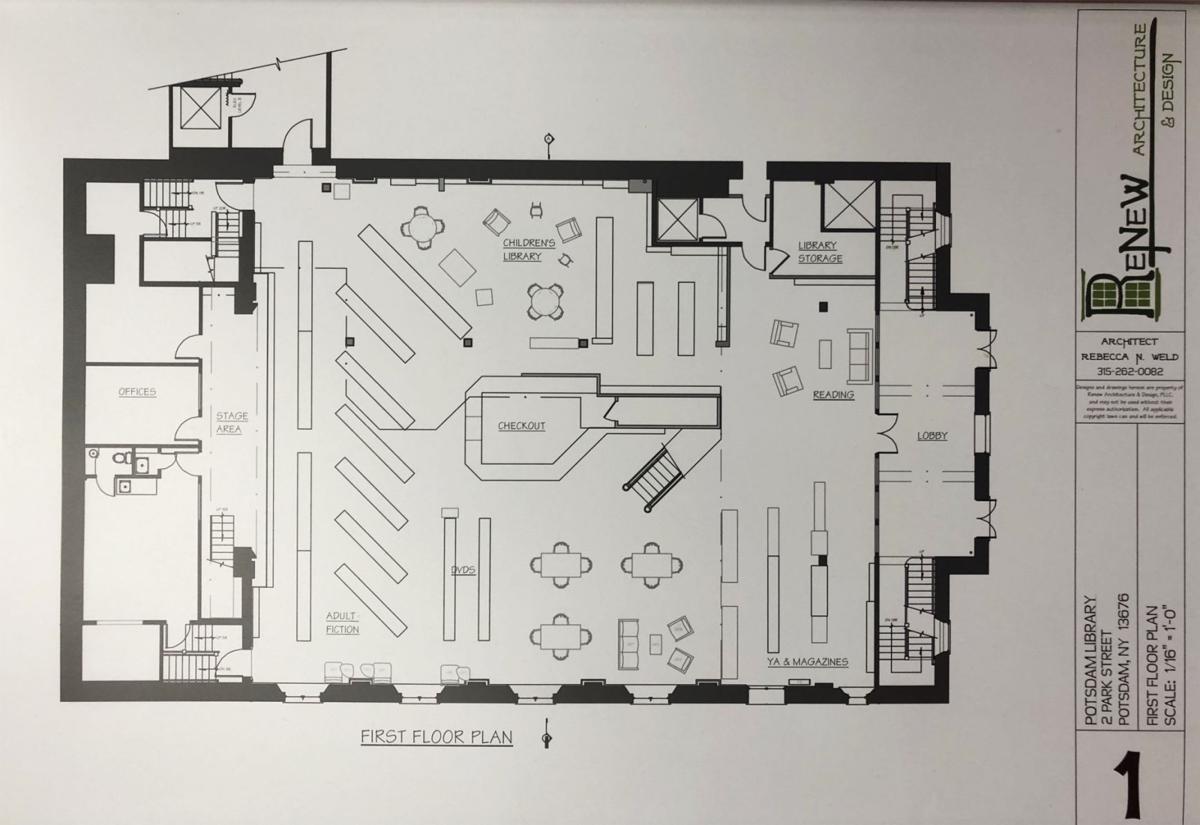 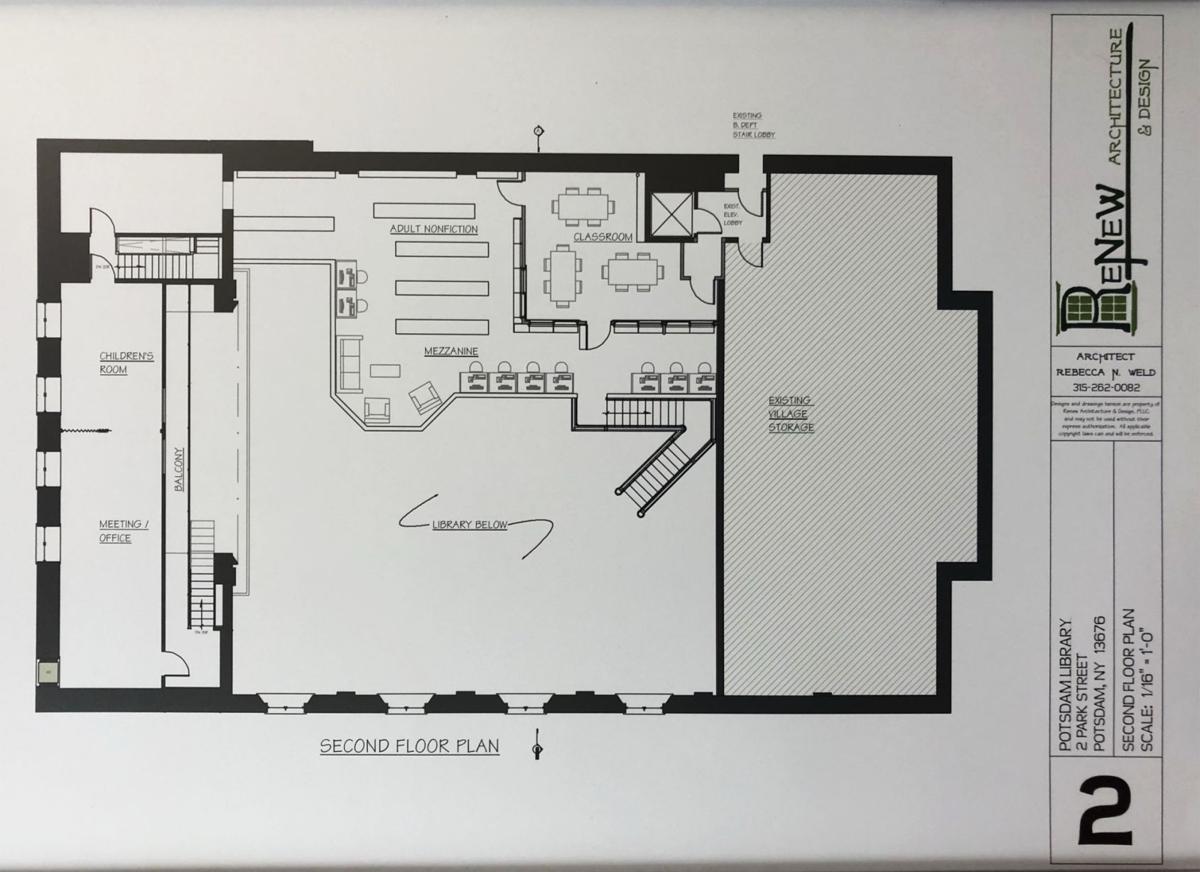 Displayed at the front entrance of the Potsdam Public Library, August, 12, are plans for the renovations and addition of a mezzanine. Christopher Lenney/Watertown Daily Times (Eckert)

Books have been removed and shelving shuffled around the Potsdam Public Library in preparation for renovations and addition of a mezzanine. Christopher Lenney/Watertown Daily Times

POTSDAM — With a classical eye and reviewing a copy of the 1934 blueprints of the Potsdam Public Library, Rebecca Naomi Weld, the principal and founder of Renew Architecture & Design, is trying to bring back some of the library’s former glory in renovations that are scheduled to begin in the fall.

Potsdam Library Director Ann T. Chase said the project was huge and started off with a goal to renovate the entire library.

“It’s badly in need, obviously, and it was such a large project that we wanted to break it up into different phases, because there’s a maximum amount of grant money that you can ask for at one time without maxing out what’s available that year,” Ms. Chase said.

Broken up into three phases, phase one grant funding totaling $324,457 has already been received. Phase two, in the amount of $445,026, is just being announced.

Ms. Weld said she is aiming to put the work out to bid at the end of September, beginning of October and allowing about a month for the process to take place with a hopeful start time of November. The goal is to have the first two phases finished by May 2020.

Renovations through those two phases include moving shelving from the meeting area to make it more spacious, building a mezzanine that would take up one third of the library space and would cover an enclosed children’s center below and seating, the adult non-fiction section and a computer center above.

The four goals of the library renovation are to reduce noise transfer by creating an enclosed children’s area, to increase capacity for classes and events by adding a larger classroom, to increase privacy for computer users, and to add more space for comfortable seating and the non-fiction section.

The computer center, in the basement of the library, will not be affected by the construction.

There will be a new main staircase near the front checkout that will be ornate in design and will be a sculptural element to the new stairwell.

“If you think about the classic libraries, they have those balconies and then sometimes they will have elaborate spiral stairs or they will have other sorts of features, so I did want it to be a feature,” Ms. Weld said. “It will be one of the first things you will see when you come in and then the checkout desk will kind of be tucked into the stairs.”

While phase one is focused on the mezzanine, phase two involves taking the ceiling out and putting in a new heating, ventilation, and air conditioning system.

The ceiling was 24 feet originally but with the drop ceiling that was installed it’s now about 16 feet, leaving six to eight feet of additional space between the drop ceiling and the finished ceiling.

“And the finished ceiling has finishes,” Ms. Weld said. “It has a big cornice with all this trim at the edge and then these kind of pilasters at the top has a decorative top, so all of that is going to get exposed and refurbished and all of that is also mean that this new mezzanine will be at the right height, functionally, but also feel right in the space.”

In the full scale blueprint copies, Ms. Weld said the details of what the library used to look like included fancier balusters and huge steel atrium with a large bank of glass doors that went from the reception to the auditorium area.

“And then there were all these columns,” she said. “So we had all these cool drawings of these, full scaler, this is the profile of it. So some pieces I would like to get replicated . . . and other parts will be painted steel or like kind of an approximation of what was there before. So there are parts where you can make it special and parts where you can make it all match.”

She said she also plans on using the books as a feature in the large space, including lining the walls of the classrooms on the mezzanine with books and putting windows in with bookshelves, and the classrooms will be looking at the backs of books and visitors on the first floor would see books and “get that sense that there are books and books.”

Ms. Chase said she received other exciting news this week, that there was some grant funding that was “a little iffy,” but came through.

“We didn’t know whether it was going to be reinstated or if it was going to be cancelled and it ended up being reinstated,” she said. “Meanwhile, we were invited to come into the grant process because they didn’t want to send the money back to New York State, so the coordinator knew that we had this sitting out there and we’ve been waiting to apply when there will be a favorable match.”

“So we got the news this week that the funding is there and we are going to go ahead and really quickly get this grant application together for phase three and that will be it,” Ms. Chase said. “That will be the end of our wish list. We’re really going to be able to accomplish absolutely everything we initially thought of to do.”