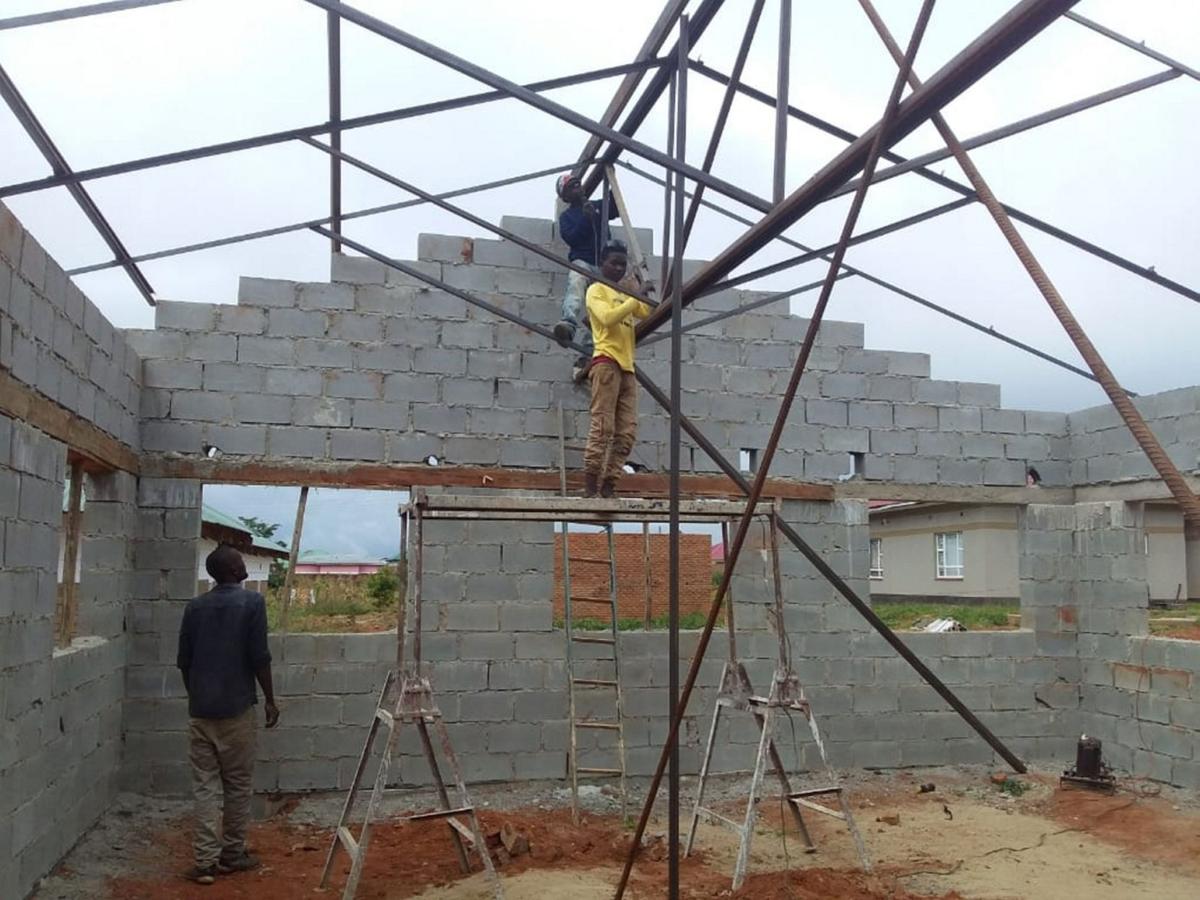 Members of the construction crew work on the structure of the new MELT library in Malawi. Provided photo 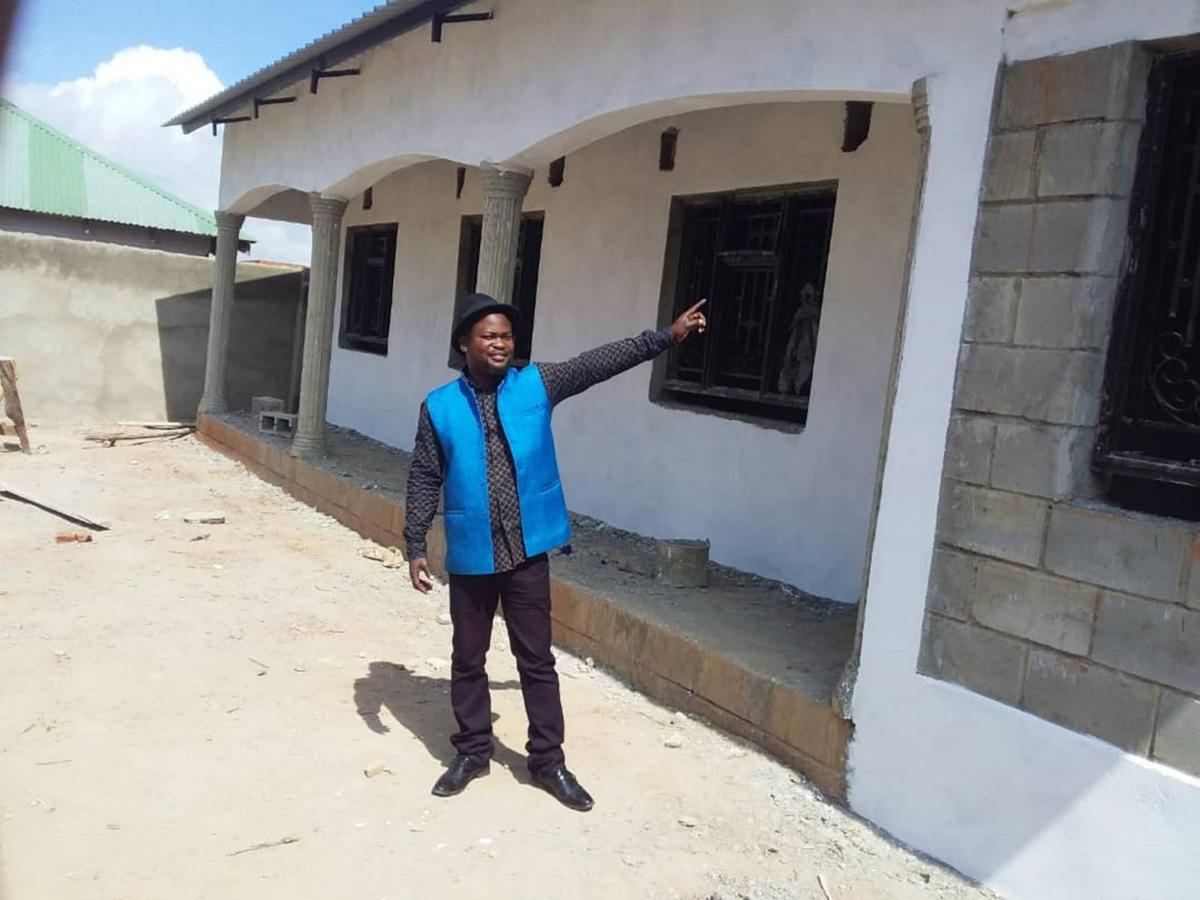 Sam Chirwa, director of MELT’s library in Malawi, proudly points to the new building that will soon house many books and literacy materials. Provided photo 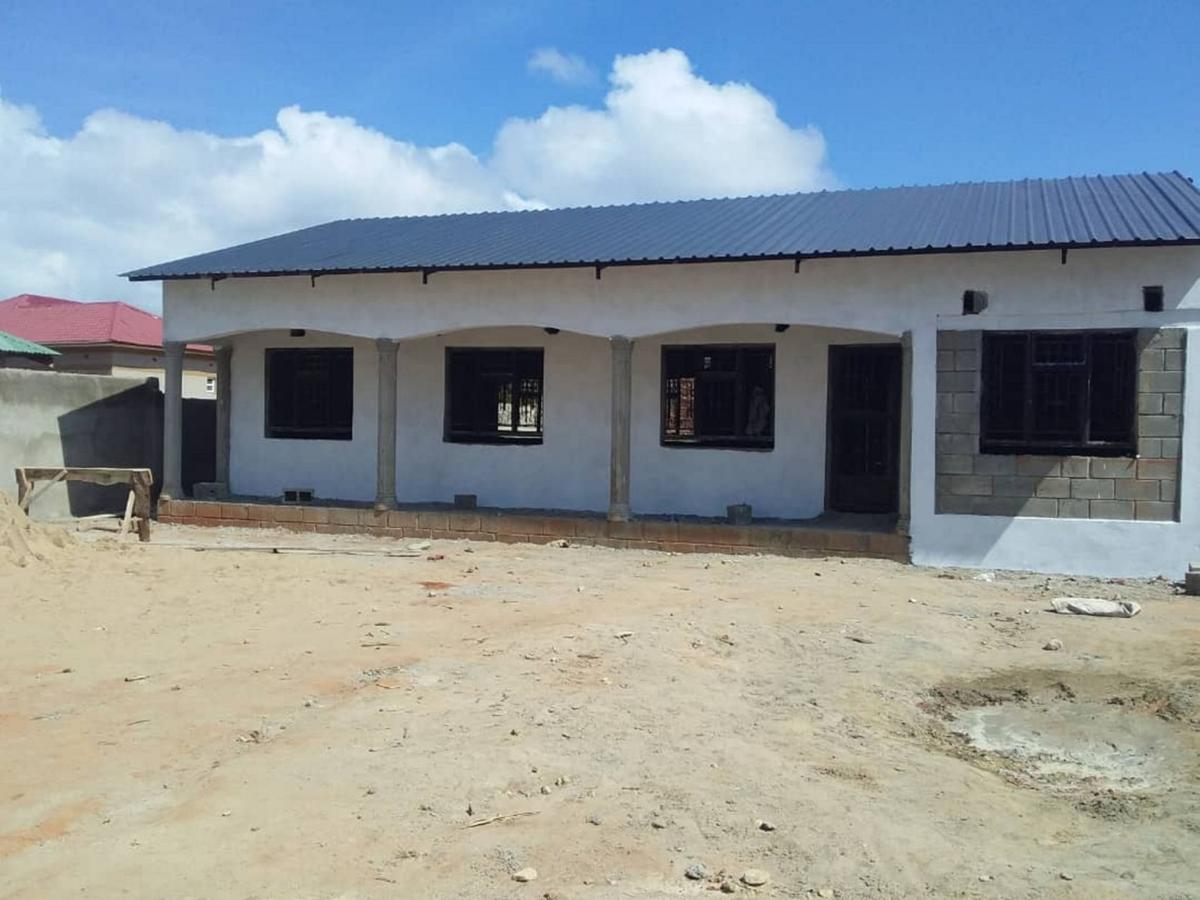 The exterior of the new MELT library in Malawi. The former library was destroyed by protesters last year. Provided photo 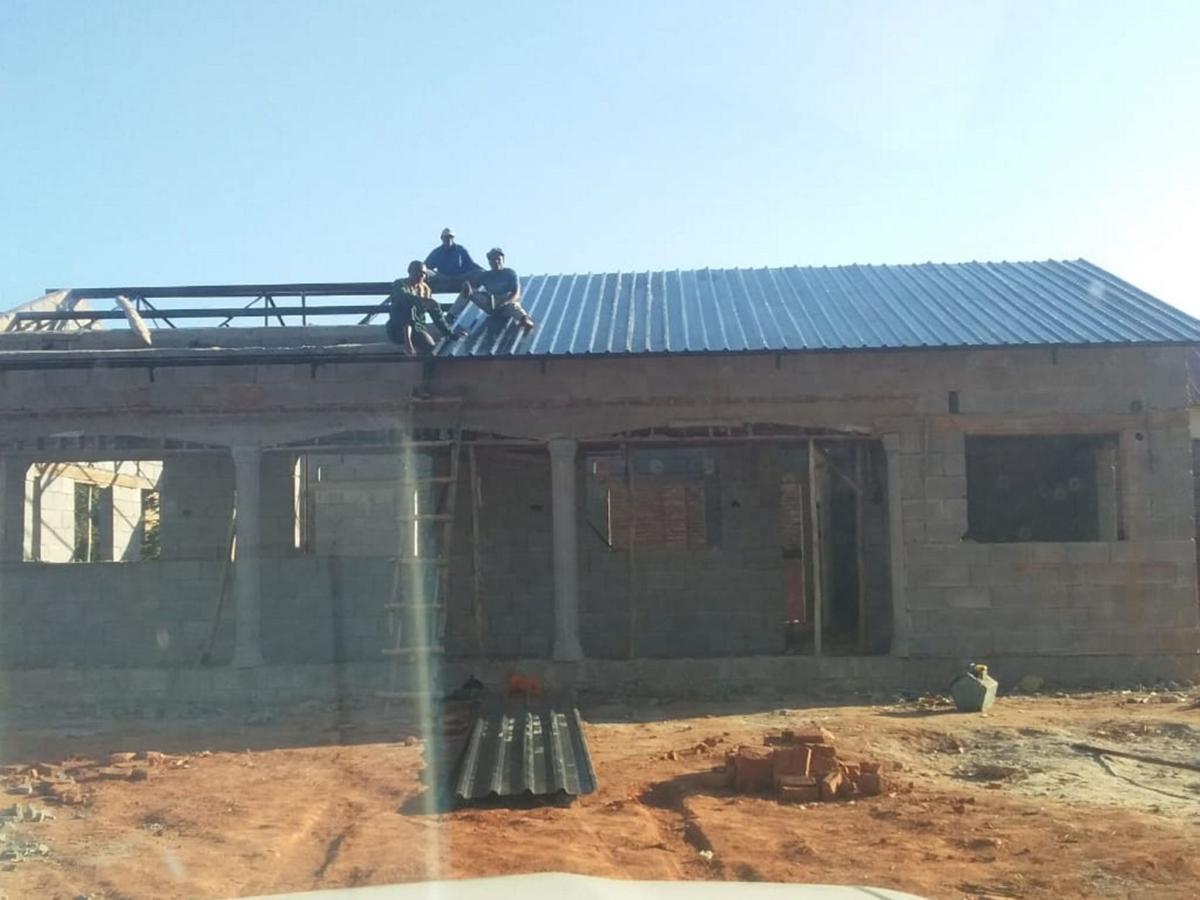 The roofing crew poses for a photo while completing the roof of the new MELT library. Provided photo

Members of the construction crew work on the structure of the new MELT library in Malawi. Provided photo

Sam Chirwa, director of MELT’s library in Malawi, proudly points to the new building that will soon house many books and literacy materials. Provided photo

The exterior of the new MELT library in Malawi. The former library was destroyed by protesters last year. Provided photo

The roofing crew poses for a photo while completing the roof of the new MELT library. Provided photo

WATERTOWN — Last year, while Americans were celebrating the Fourth of July with fireworks and food, protesters were vandalizing a library in the northern region of Malawi in Africa as part of a political protest against the president at that time.

Protesters broke into the building and took boxes of books into the driveway, set them on fire and scattered the pages around.

Losses included more than 5,000 early readers, book bins, shelving, racks, tables and more. What remained were six new library shelves, 1,200 books that were loaned out to schools at the time, 400 books en route to the library, ABC fluency kits and the library’s Land Cruiser.

A group out of Watertown known as the Malawi Early Literacy Team, an ecumenical mission project of Watertown’s First Presbyterian Church, had been renting the space for the past two years in an effort to provide books and literacy kits to those in the area.

MELT provides the teachers and students of northern Malawi with four key services: early literacy publications, teacher training, teachers’ manuals and the Land Cruiser that acts as mobile library that transports the materials to classrooms.

“That building was a loss,” said MELT Chair Heather White of the former library. “We knew we couldn’t rent that space any longer.”

By the time Mrs. White had returned to Malawi with her son Jason last August, police had called the library’s director, Honorable Sam Chirwa, and said they’d found 2,000 of the missing books.

Since then, MELT has raised funds and reprinted another 2,000.

While they were still in Malawi, Jason started drawing plans in pen, and through working with the Malawian government, the person in charge of educational services and the commissioner of lands, by the time they left, the drawings had approved and they had permission to purchase land and erect a new building.

Now, a year later, construction has finished at MELT’s new library. While the previous space was rented from someone else, this time around MELT owns the land built upon as well as the library.

“In one year, we were literally destroyed and built back up better than we ever thought possible,” Mrs. White said of the effort.

The project consisted of three phases, which included the purchase of the land, the new MELT Central Library Building, interior work — including the library space, administrative office, rest rooms and a small kitchen area — as well as a security wall and lighting around the property to hopefully deter future vandalism. Through each phase, Mr. Chirwa was keeping the U.S. based MELT team updated on progress with photos and videos via WhatsApp.

The new library has received primer coats of paint, and will be painted fully by the end of next week. After that, the books and other materials, which have been stored in a temporary space in the meantime, will be housed there, finding a permanent home after the upheaval of the past year.

According to Mrs. White, the building will have two rooms’ worth of storage space — enough to house 50,000 books and 500 big books as well as office space for Mr. Chirwa.

“One of the rooms is large enough to have a grand meeting table where 12 teachers can sit together and collaborate,” Mrs. White said. “There’s nothing in the northern region like that. It also has men’s and women’s bathrooms, which is a big deal.”

The library will also feature a small kitchen corner with a fridge and a stove because, according to Mrs. White, it is culturally important in Malawi to always have refreshment on hand for meetings.

Amid the ongoing COVID-19 pandemic, virus case numbers are rising in Malawi — a third world country where testing is minimal at best, according to Mrs. White, and keeping equipment in good repair is very difficult.

Due to high numbers both overseas and in the United States, MELT’s 2020 trip to Malawi had to be canceled, but they have books published and ready to go as well as this year’s word kids and training manuals. The group is hoping for a May 2021 trip to Malawi to see the library in person and bring along the new materials.

Like in the U.S., schools in Malawi closed in March, according to Mrs. White, and remained closed for the rest of the year. If they reopen in September, MELT looks forward to starting up circulation of reading materials again.

Currently, the group is working on raising funds to add the finishing touches to the interior of the library, like providing Mr. Chirwa with a desk, among other things.

“It’s so exciting and a dream come true for all of us,” Mrs. White said of the new library. “The grit of the MELT team on both sides, the stick-to-it-if-ness in the face of destruction and political upheaval, the virus, it’s been amazing. I couldn’t be more proud and it only reiterates the need for people to have access to literacy.”

For more information on the project and how to donate to the cause, visit http://malawiearlyliteracy.org/.