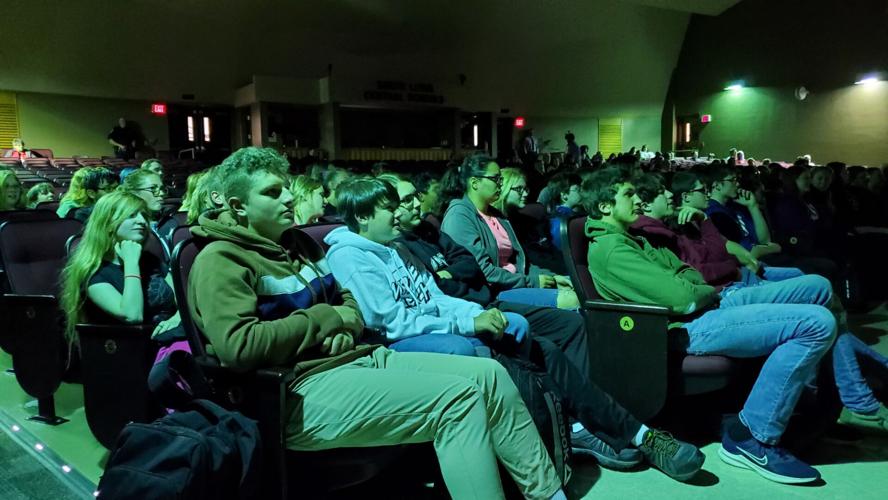 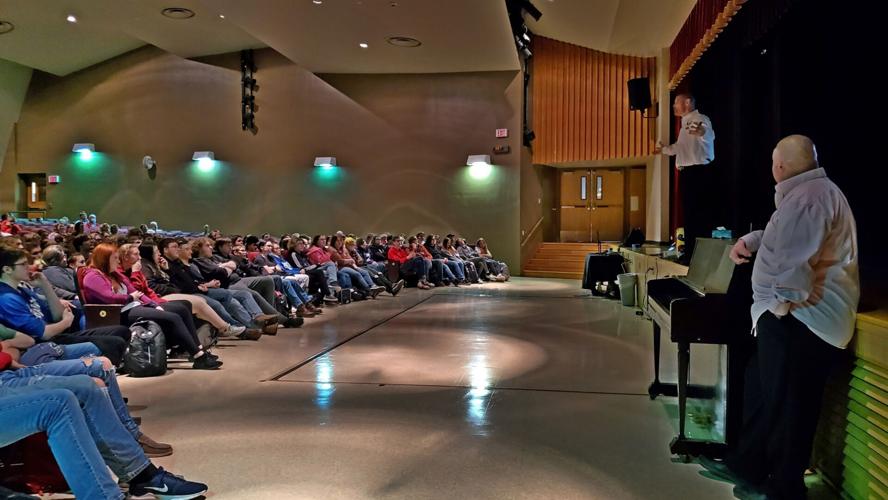 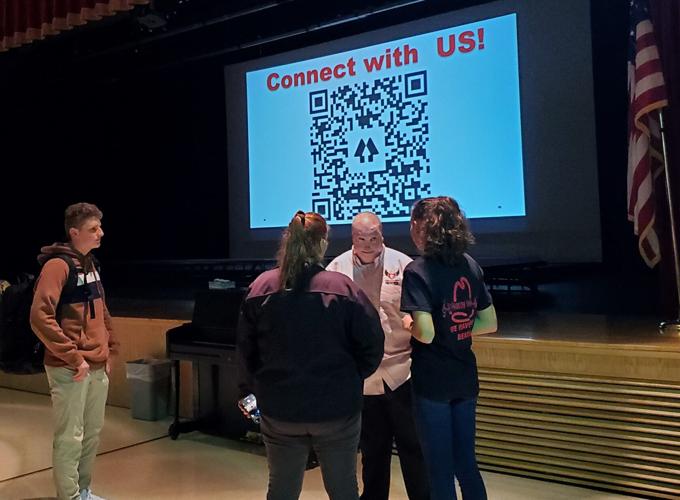 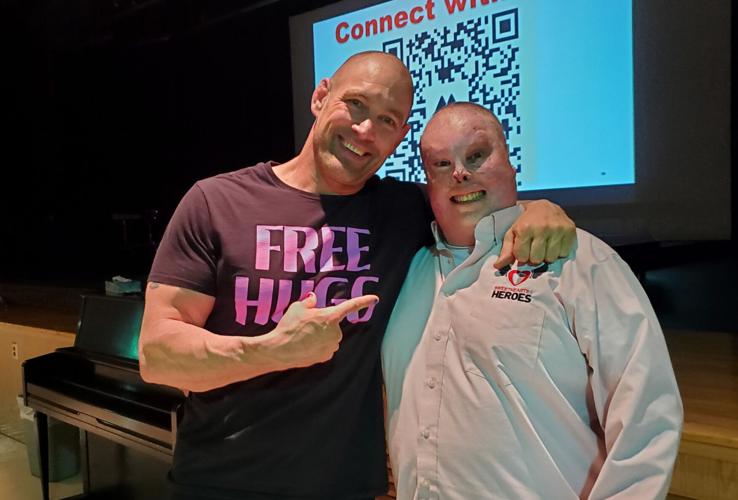 Tom Murphy, left, created the Sweethearts and Heroes program to inspire empathy in children and youth and encourage hope as part of an anti-bullying campaign. Retired Army Sgt. Rich Yarosh joined the program to share his story of finding hope and, eventually, his purpose in life, after he was severely burned during a 2006 deployment in Iraq. The duo presented their program to South Lewis Central School District students on Wednesday. Julie Abbass/Watertown Daily Times 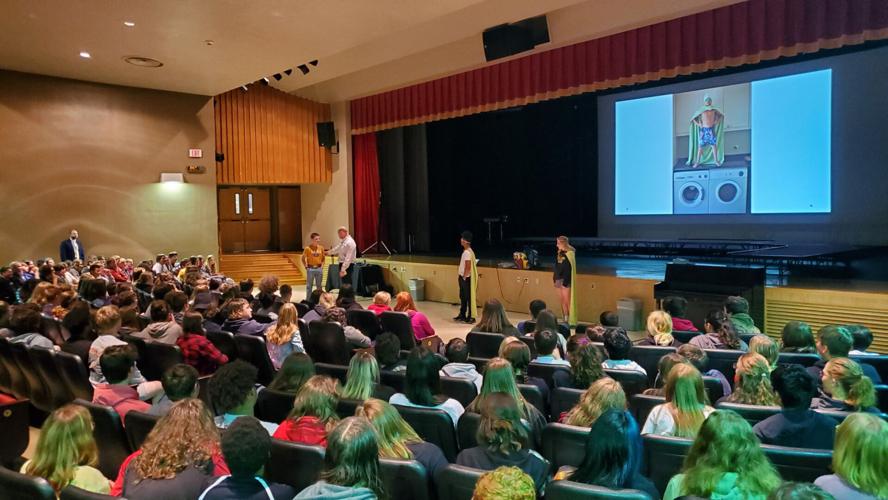 As part of the Sweethearts and Heroes anti-bullying program presented on Wednesday, South Lewis Central students act out a scenario to exercise their “superpowers” and help someone getting picked on to become a “hero.” Julie Abbass/Watertown Daily Times

Tom Murphy, left, created the Sweethearts and Heroes program to inspire empathy in children and youth and encourage hope as part of an anti-bullying campaign. Retired Army Sgt. Rich Yarosh joined the program to share his story of finding hope and, eventually, his purpose in life, after he was severely burned during a 2006 deployment in Iraq. The duo presented their program to South Lewis Central School District students on Wednesday. Julie Abbass/Watertown Daily Times

As part of the Sweethearts and Heroes anti-bullying program presented on Wednesday, South Lewis Central students act out a scenario to exercise their “superpowers” and help someone getting picked on to become a “hero.” Julie Abbass/Watertown Daily Times

TURIN — “I think you’re really cool and inspiring,” two middle school girls told the retired Army sergeant who had just shared his story during an assembly at their school.

He talked about moving through the challenges he faced after more than 60% of his body was burned, losing his nose, his ears, his fingers and a leg because of a fire ignited when the tank-like vehicle he was in drove over an explosive device during his Iraq deployment in 2006.

Sgt. Rick Yarosh told South Lewis students his story Wednesday — the shock and despair he experienced and the support and love that helped him see through the pain and fear to new possibilities that awaited him.

Now he says that even if he could go back in time, he “wouldn’t change it for the world.” The horrible thing that happened made it possible for him to fulfill what he believes is his life’s purpose — to inspire hope in people who may have lost it, especially children.

Mr. Yarosh, of Windsor, about 15 miles east of Binghamton, joined Thomas Murphy, of St. Albans, Vermont, about nine years ago in the motivational, anti-bullying program, Sweethearts and Heroes. Mr. Murphy created the program with a friend years before he left his job to do motivational speaking full time in 2014.

Both men were doing speaking engagements individually before they combined their efforts for the common cause of inspiring children and youth.

While the program name can be deceiving, the message communicated is one of hope, help, empathy and action delivered at times with a whisper and at others, with a touch of snark and loud expressiveness.

Mr. Murphy facilitated the majority of the program “showing, not telling” the students through a series of videos, volunteer activities, metaphors and jokes to illustrate, point by point, Mr. Murphy’s thought process on what bullying is and how to stop it through empathy, acceptance and connecting with other people, starting with “changing perspectives.”

“Young people are programmed to believe things said about them,” he said. While bullying can feed into that, Mr. Murphy added that he believes hopelessness and not recognizing a purpose in life can drive young people and adults alike to suicide.

“I don’t believe bullying causes suicide, but I certainly believe when a young person is at the end of their rope and they don’t feel accepted and then they feel like other people are trying to ‘ruin their lives,’ it might be one of the last things that pushes them over the edge,” he said.

“Hope” was presented not just as a life goal, but as an acronym-provided mantra — “Hold On. Possibilities Exist.”

Mr. Yarosh’s story provided the core illustration of how far hope can go and how simply it can be found especially through connection with supportive people on many levels.

When he came out of the hospital after six months, Mr. Yarosh said the fire-imposed changes to his face scared people, but the empathy of one little girl who saw beyond what was missing or different about him — despite her initial fear — was a simple act of acceptance that helped him to move forward.

“She dumped a bucket of hope on me and changed my life forever,” Mr. Yarosh said, adding that each student has the potential to do the same.

The message hit its mark.

“It was eye-opening,” said student Justice Maciejko, who stopped Mr. Yarosh in a hallway to thank him for his service and for the presentation after it was over. “I could see, looking around, it really sparked fire in some kids’ eyes, just like, ‘I can still hold on, I’ve got this. There’s still more room to go.’”

The “sweethearts” in the program’s title comes from the origin of the word bully.

According to the Oxford English Dictionary, bully was originally “a term of endearment and familiarity, (originally) applied to either sex.”

The students were encouraged to “be 16th century bullies” — or sweethearts — through empathy, and a “hero” by overcoming fear to help people that are being picked on or bullied in the modern sense of the word.

“If you see someone being treated badly, take them away (from the situation). The next time you see someone getting picked on, step in and say something to take them away,” Mr. Murphy said, using superheroes to illustrate the “superpowers” that can be used, like asking questions or taking actions to connect with other students, even if they are “different” or are judged harshly for some reason by other students.

“If you use your superpowers for good, you will become someone’s hero,” Mr. Murphy said.

At the beginning of the presentation, Mr. Murphy told students that they would, by the end, have an “a-ha” moment and would know exactly what they have to do.

Tenth graders Jacob Exford, Uriah Webster and Quentin Brown described the Sweethearts and Heroes program as “awesome” and “great,” and that it held their attention throughout.

“There was all sorts of good advice and stuff in there,” Mr. Brown said.

They all agreed that they know what to do now.

“One day doesn’t fix everything, we already know that,” Mr. Yarosh said. “But it can start to change the environment and open the conversation.”

South Lewis teachers also took part in a session with Mr. Murphy to discuss the topics and concepts used during the presentation.