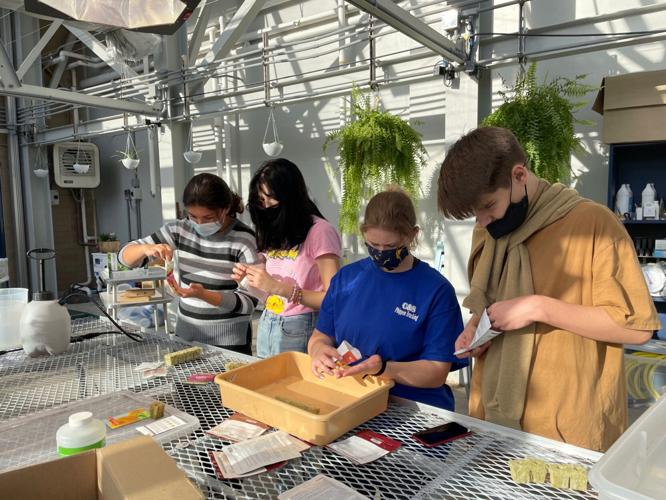 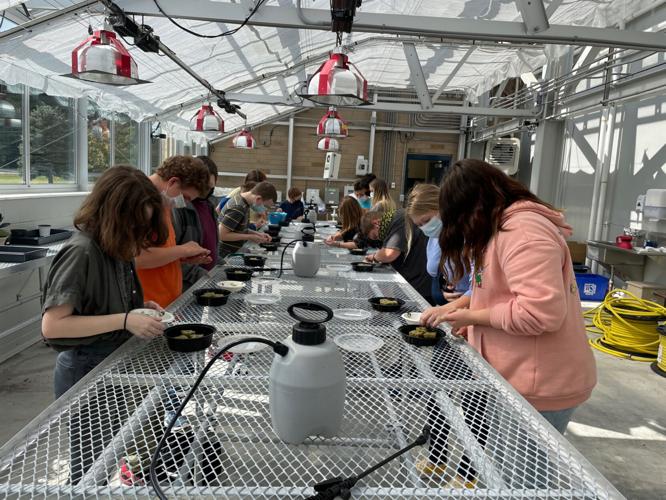 Various classes are making use of the greenhouse at St. Lawrence Central School this year. Provided photo 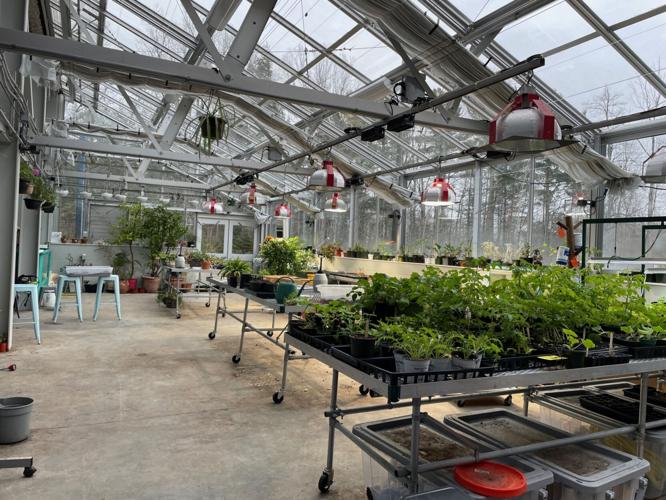 St. Lawrence Central School now has a greenhouse that’s getting its first use this year. Provided photo

Various classes are making use of the greenhouse at St. Lawrence Central School this year. Provided photo

St. Lawrence Central School now has a greenhouse that’s getting its first use this year. Provided photo

BRASHER FALLS — A greenhouse that was completed over the summer is providing plenty of learning opportunities for St. Lawrence Central School students.

Ms. Chapman is the point person for the greenhouse.

“I run all the programs and I make sure if groups are coming in that everything gets taken care of appropriately,” she said.

This is the first year the greenhouse has been operational, and she said it’s been used for a variety of purposes other than just growing things.

“We’re trying to bring classes in right now and figure out what we can do, like individual class curriculum,” she said.

For instance, an art class might come down do a drawing study, “or the chorus is going to come down and sing in the space because it’s a completely different space,” Ms. Chapman-Hirsch said.

It’s even being used for forensics.

“Forensics is going to come in next week and they’re doing dirt sampling studies,” she said.

She said seniors are serving as interns for the project.

“So, they get some real life on-the-job-style training for what working in the real world is like and working in a greenhouse,” Ms. Chapman-Hirsch said.

“The high school class will get a lot more in depth on the science side,” she said, noting one of the projects would be assisting the state Department of Environmental Conservation with bird counting.

Conservation class students will have opportunities to work a nature trail on the property, do experiments and grow different things in the greenhouse, or study and make presentations in the classroom.

In addition, the school has a Greenhouse Club that meets twice a week.

“We have a high school-only day and a high school/middle school day because we’re just trying to get everybody involved,” Ms. Chapman-Hirsch said.

Of course, the greenhouse, which is located near the school’s gymnasium, also produces plants and vegetables.

“This year we’re really trying a little bit of everything. So, we have a table that’s all dedicated to vegetables. We have a bunch of succulents because succulents are kind of an easy activity if the class wants to come in and just get their hands dirty or something,” she said.

They’re also growing house plants, and there’s a giant fish tank that will be a temporary home for native species of fish like trout.

“We’re supposed to get them 90 days out and then we’re going to be releasing them into the local waterways,” Ms. Chapman-Hirsch said.

Looking ahead, the students did a proposal for creating a pollinator garden, which they started in the fall and will finish up in the spring. That first phase of work was done by the greenhouse crew, conservation class and Greenhouse Club, clearing out large weeds and smothering the current plants with cardboard.

There’s also a courtyard garden in the works. The Greenhouse Club won a Budding Botanist grant from the Klorane Botanical Foundation and the nonprofit KidsGardening. Students in the Greenhouse Club and conservation class are participating in designing the garden and building raised beds over the winter so they’re ready to start planting in the spring. The garden will be run by students.

“We’re going to be building a vegetable and fruit garden in the courtyard to augment what we’re doing in the greenhouse and for other classes to use as a study experience, and of course, food gathering and stuff like that,” Ms. Chapman-Hirsch said.

“Essentially, we are really attempting to grow hands-on learning opportunities for our students,” high school Principal Kristen Zender said. “In particular, we have looked at opportunities regionally to partner with industries where the skills that students develop can easily transfer over to either a potential for employment, economic development for the region, etc. We have started to quickly develop partnerships with many local businesses and are excited about the rapid trajectory of the Greenhouse Program as well as developing a bee program in conjunction.”

Stay up to date on the greenhouse and courtyard garden efforts by visiting wdt.me/SLCgreenhouse.