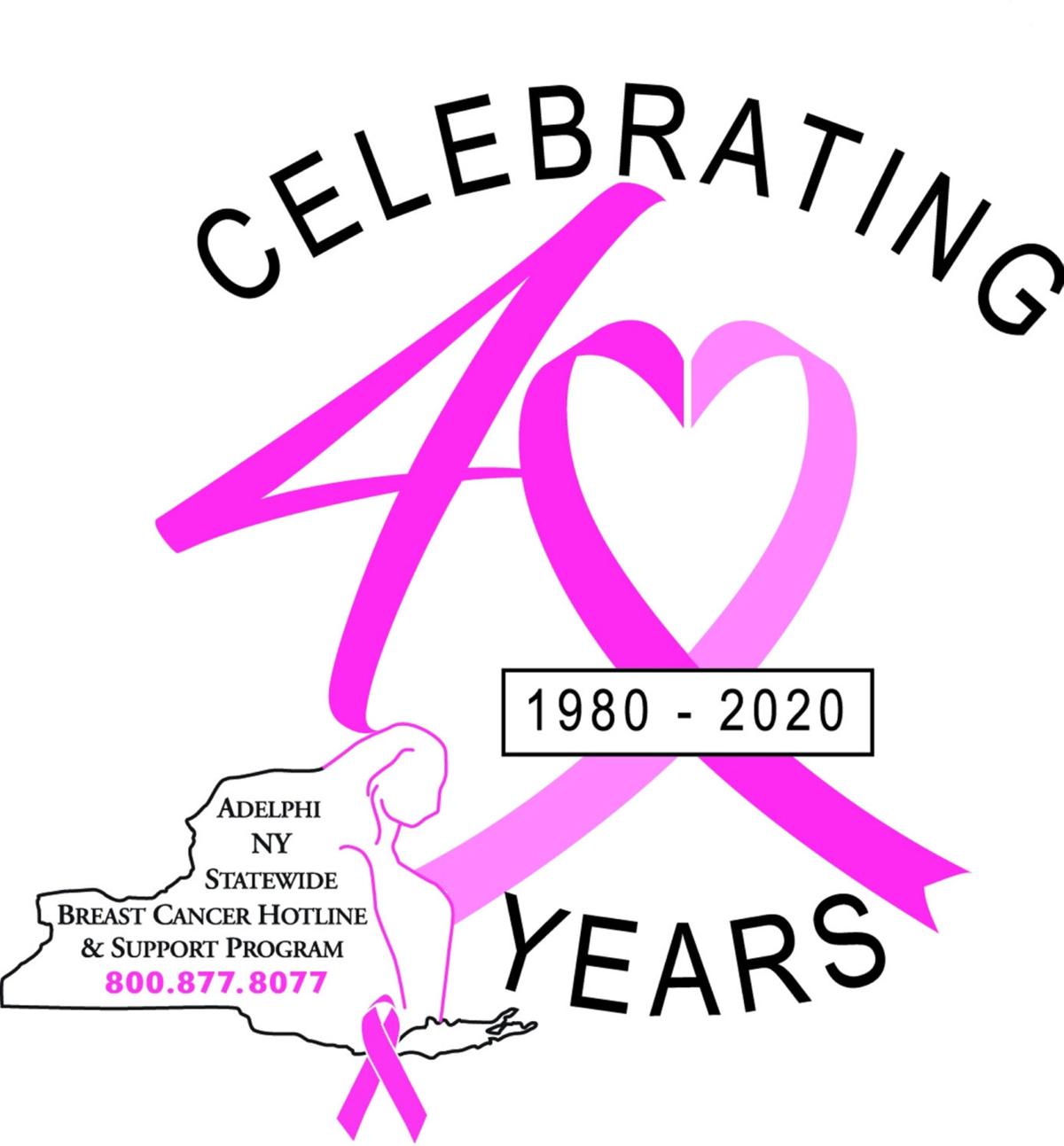 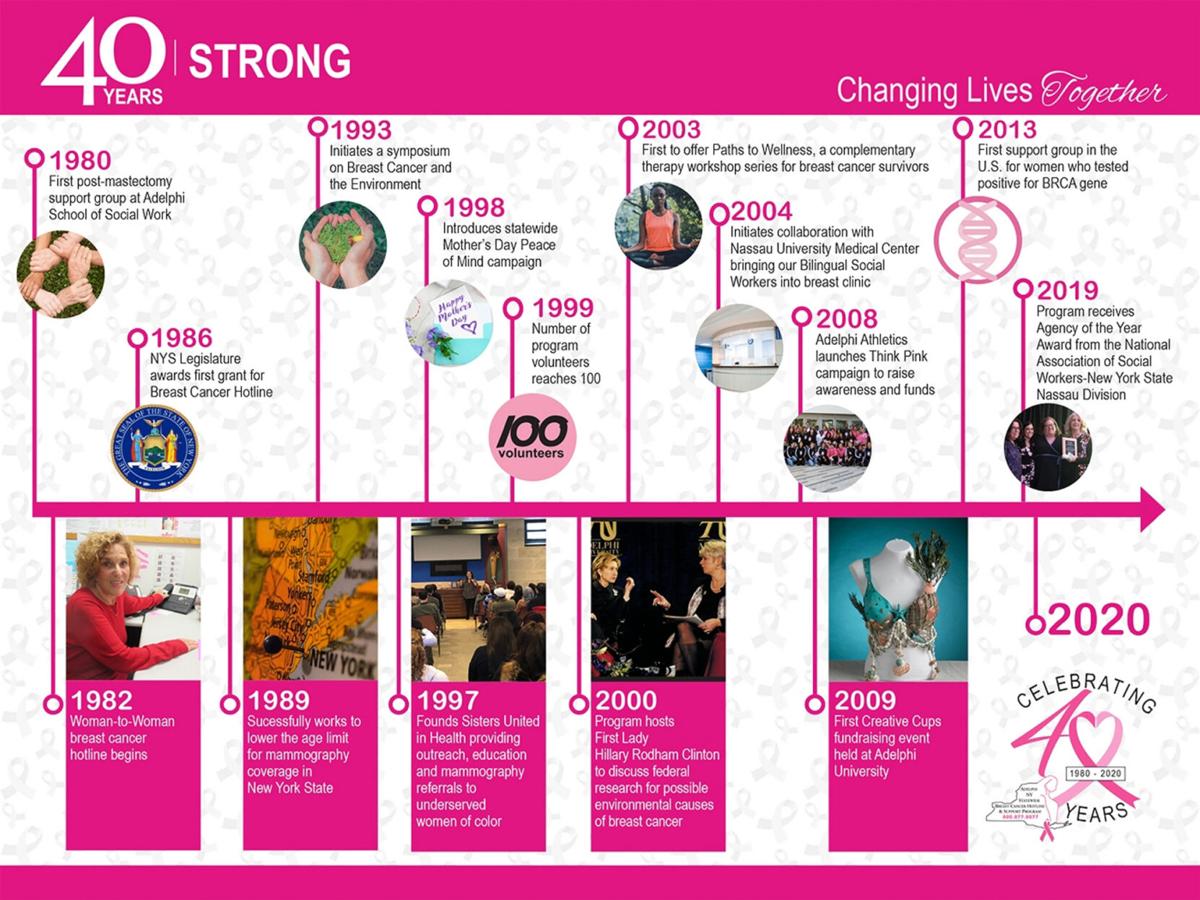 WATERTOWN — In 1980, from a strong determination to meet the needs of those dealing with breast cancer, the first post-mastectomy group began at Adelphi University’s School of Social Work.

The women in the group found comfort in sharing their fears and experiences among others who were experiencing the same, and decided they wanted to be able to reach out to others facing breast cancer, regardless of distance.

At a time when cancer was not widely discussed, a stark contrast to today’s reality, these original group members, along with those affiliated with Adelphi, developed the Woman-to-Woman Hotline.

The hotline began with nine trained volunteers working seven hours a week. By 1990, with funding provided by New York, the hotline expanded to cover all of the state. When the hotline first started its statewide outreach campaigns, it would prepare informational ads about things like mammograms and mail them to newspapers throughout the state.

One day, months after one of the campaigns ended, Ms. Dobrin received an unexpected call. A Watertown man had seen the ad in the Times and showed it to his wife, telling her she should go get a mammogram. When she did, her breast cancer was found early and she was able to receive treatment, so he was calling to thank the program for bringing awareness and possibly saving her life.

“Watertown has a very special place in my heart for that because I figure for that one man who called, there must be many others who will just move on with their lives, but who we helped by just reminding them to take care of their health,” Ms. Dobrin said.

Ms. Dobrin has been with the program from the start and watched it grow from a support group for women with breast cancer to a service that provides free support to thousands of New Yorkers every year. Eventually, as cancer became less taboo to talk about, the name of the hotline changed to the Adelphi NY Statewide Breast Cancer Hotline and Support Program.

Now, the program has a professional social work staff as well as more than 100 trained volunteers who run a hotline and website and provide counseling, education and advocacy programs.

“Looking back on my life, I want my life to have meaning, and working with something like this gives it meaning,” Ms. Dobrin said. “Knowing that I have been helpful in getting the word out about how people can be helped with this disease, it makes me feel really good about the way I’ve lived my life.”

Over the past four decades, the Adelphi NY Statewide Breast Cancer Hotline & Support Program has successfully worked to lower the age limit for mammography coverage in New York, founded Sisters United in Health, which provides outreach, education and mammography referrals to underserved women of color; hosted Hillary Rodham Clinton to discuss federal research for possible environmental causes of breast cancer; became the first to offer Paths to Wellness, a complimentary therapy workshop series for breast cancer survivors; was the first support group in the U.S. for women who tested positive for the BRCA gene mutation and much more.

Though specifically designated for New York, the hotline is there for anyone who needs it, regardless of the state they live in.

Hotline volunteers are also extensively trained on things including the disease itself, how to answer calls, when to bring in a social worker and so on. If a caller needs to speak more than once, and they start wanting to speak with the same person each time, that can be arranged. Then there are the specialties, so if a caller is getting ready to have a particular treatment, the hotline can connect them with a volunteer who has had that treatment so she can give the person an idea of what that might be like and be there for them after. The hotline also helps with referrals.

Now, a woman born in the United States has a 1 in 8 chance of developing invasive breast cancer during her lifetime. In New York, about 14,028 women will be diagnosed with breast cancer this year. Though at a lower percentage, men can also develop breast cancer.

“You don’t know who’s gonna get it, where it’s gonna hit,” Ms. Dobrin said. “It’s a disease that affects all of us whether we get it ourselves or whether we have somebody we care about who gets it.”

All services the hotline offers are completely free for callers. Currently, due to the ongoing COVID-19 pandemic, calls to the hotline are being rerouted to volunteers at home. To connect with someone from the hotline, call 800-877-8077. To learn more about the hotline as well as upcoming events, or to donate to the cause, visit breast-cancer.adelphi.edu.

“I think what we’re doing helps so many people; we have such a wonderful staff and then the hotline volunteers, these are all women who’ve been through hell,” Ms. Dobrin said. “They have a lump, cancer has been found, and then they’ve gone through some kind of operation, treatment, whatever. ...now they turned around, and they say, ‘OK, I’m going to help somebody else, nobody should go through this alone.’ ... They’re there to help so that nobody goes through this alone.”