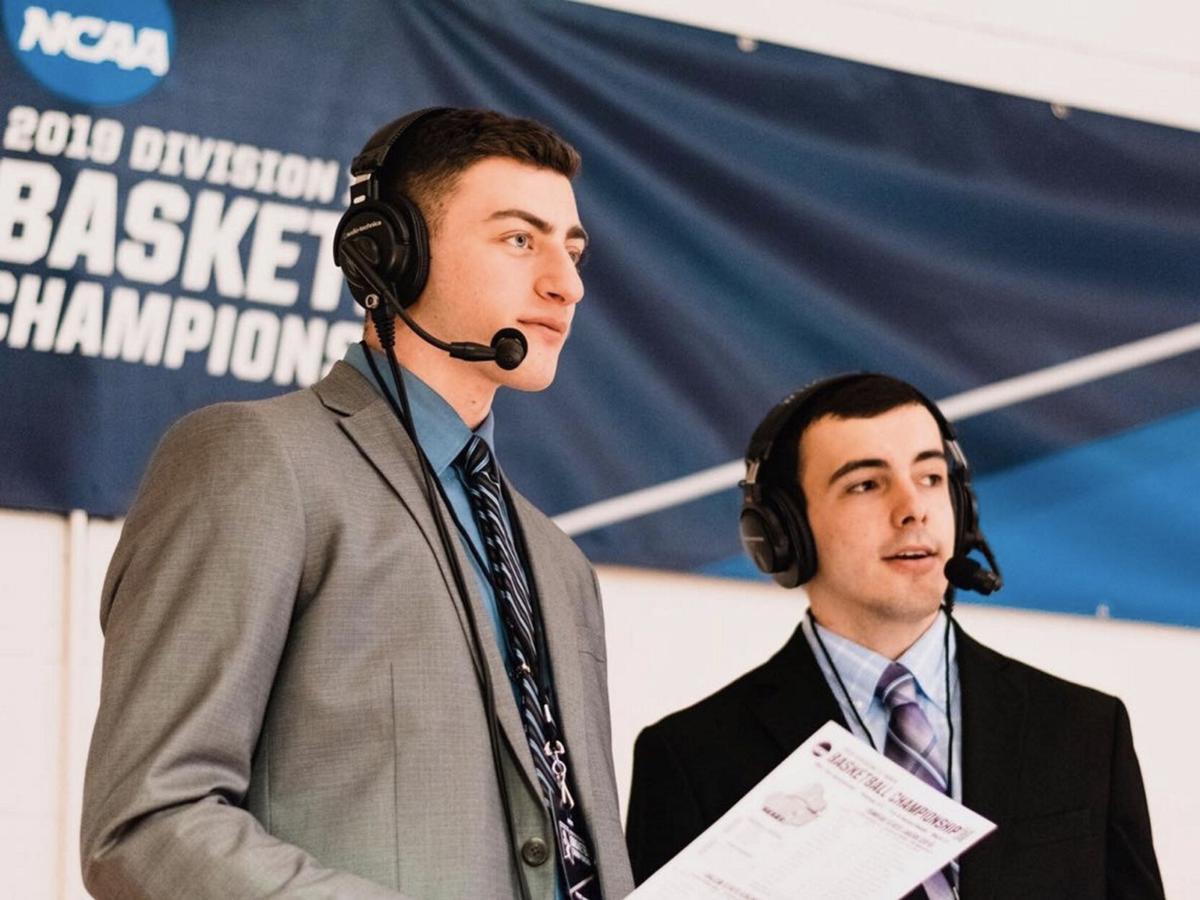 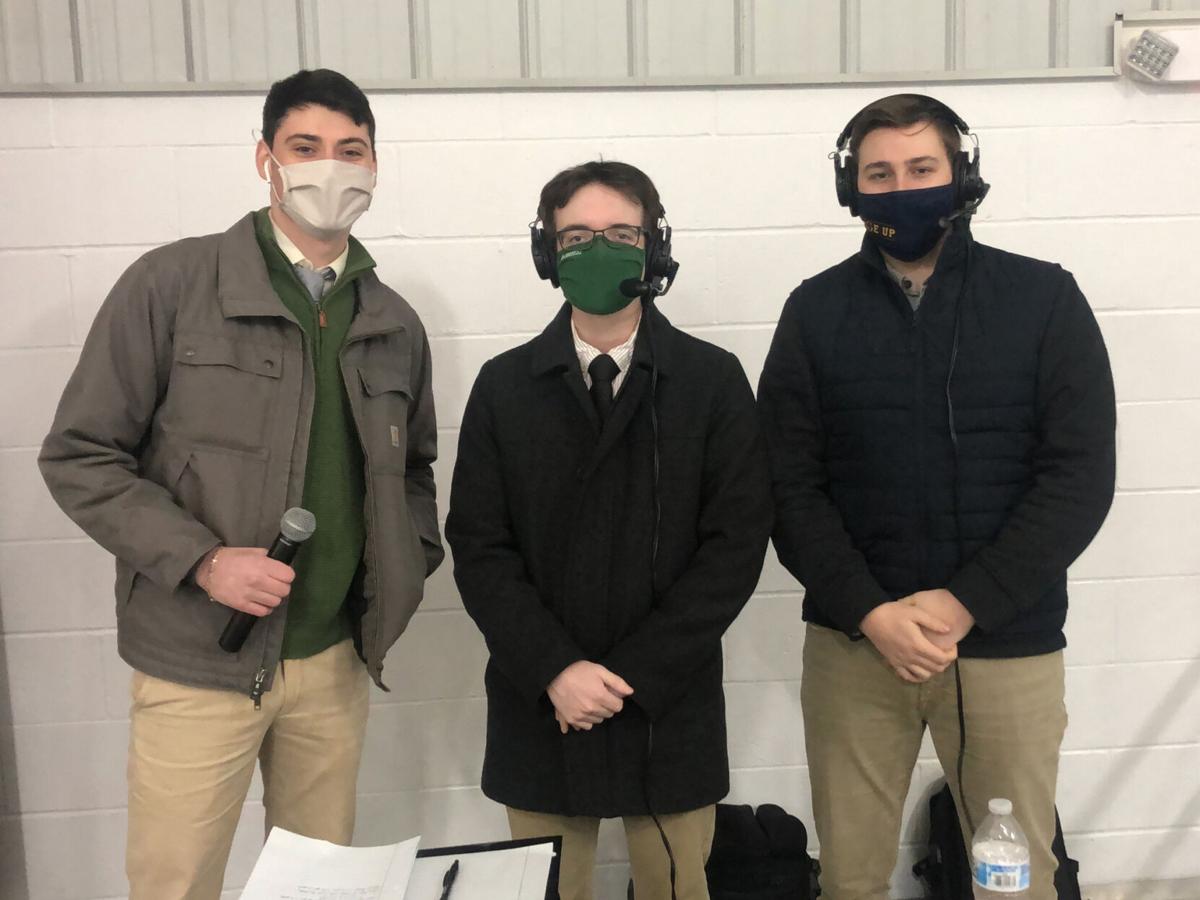 “WNYO’s recent success is a direct result of the hard work from each individual member of the station,” said Jenn Robilotto, a May graduate who served as WNYO general manager for 2020-21. “Everyone is so creative and passionate about what they do; it really is inspiring.”

Case’s award reflects how he became a regular news source, as he updated his Twitter account (@ZacCase6) daily with case counts and other statistics from the Oswego Forward COVID dashboard, as well as any changes in policy on campus or New York state.

He also served as a go-to resource when Laker athletics returned in spring 2021. “I was able to provide updates on scheduling changes across the SUNYAC and in Oswego,” Case said. “On game days, I would provide score updates on the games happening on campus.”

Ladd and Valentino’s award-winning sports show also reflected their passion for athletics and broadcasting, and adjusting to the pandemic.

“The main portion of the sports director’s job is to figure out how we’re going to cover those live sporting events, so when that is all just gone, I was trying to figure out a way that we could still produce content on a daily basis,” Valentino said.

He and Ladd have been friends since around the start of their Oswego journey, and over summer 2020, they decided to do the show together as “a way for us to have a radio show more times a week and also provide the station content,” Ladd recalled.

“The clip we sent, I thought, was very good,” Valentino noted. “The entire show that we did that day was very good.” In it, they interviewed Tim Healey of Newsday, who covers the New York Mets, plus discussed the surging New York Knicks as the NBA trade deadline approached, among other topics.

“The most important thing is we just had a ton of fun doing the show all year and the clip that I sent in showed that,” Valentino said.

“For starters, we couldn’t have done this without the help from the athletics department and the teamwork of everyone involved, not only on this particular broadcast but in all aspects of WTOP as well,” Gross said. “This broadcast had it all. Fantastic camera work, phenomenal directing and a great call.”

Gross thinks the chemistry he and Ketter had, and their attention to story and detail, also were factors.

“I can’t thank Nick Ketter enough for being my color commentator throughout those two years I spent with him because he brought out the best in me and helped tell a great story throughout every game,” Gross said. “In each live sports broadcast, it is important to tell a story and that is a culmination of audio and video. Both were spectacular and that, I believe, is why we sent a clip from this game.”

To win awards in a year that required so much adaptation is especially impressive, and Robilotto attributes that to media organizations being open to finding new ways to make things work.

“While not every idea is a winner, the experience alone almost always leads to improvement and higher quality content in the future,” Robilotto noted. “This year we really tried to push for shows to try new things and we gave our broadcasters a lot of freedom. It has clearly paid off and I think that we have a winning formula should next year’s management continue with this strategy.”

“WNYO and the rest of the media organizations made a lot of adjustments to ensure things still ran smoothly,” Case said. With only two members allowed in the studio, they had to get creative with execution. With no Laker winter sports, WNYO pivoted to broadcast Oswego High School Buccaneers hockey for the first time ever, deploying a crew to Oswego’s Crisafulli Rink.

Another key to success “was the metaphorical fire that was still lit for a lot of us to get better and take advantage of the extra time caused by the pandemic,” Ladd said.

“The beauty of all of us going to college during the era of online classes is it has made us more technologically sound and also gives us more time to focus on broadcasting,” Ladd said. “We worked hard on countless Google docs and team drives to keep making content from our homes.”

When the Lakers resumed play in spring 2021, the student media organizations sprung back into action and offered plenty of opportunities.

“With the restart of sports and a compressed schedule, the media orgs could cover a live sport almost every day,” Valentino said.

Robilotto lauded WNYO’s sports department for finding many ways to shine, and said Valentino’s “drive and motivation to do something great is responsible for this year’s success.”

Gross said WTOP is like a family, and not getting to be together in the same room and see the same people on a daily basis was challenging for their broadcasts and their daily lives, but as they always do, “we figured out a way to continuously succeed by consolidating and making do with what we have,” producing “fabulous broadcasts” across the Laker sports this spring.

“Another thing, nobody in WTOP gives up,” Gross added. “There are setbacks all the time in the television industry and solving problems is pretty much what we do 24/7. Each and every individual involved this year put their best foot forward and gave it their all instead of letting the pandemic-influenced setback control the outcome of their semester. I am so proud of everyone in WTOP over the last 15 months.”

“The student media organizations at SUNY Oswego might be one of the best trios (WTOP, WNYO and The Oswegonian) in the country when it comes to college media programs,” Gross said. “Not only does everyone have the ability to join these organizations, but they get the chance to learn from the upperclassmen who have experienced it all and are eager to pass on their knowledge to the next generation of students.”

Robilotto credited Cole Parzych, who “set a really high standard when he was sports director three years ago and the culture of excellence that he fostered has set itself in stone.”

Valentino praised the mentorship of Brittany Cairns, a previous award-winning sports director who now works at ESPN, for taking him under her wing.

The constant investment in outstanding facilities is another factor, Robilotto said.

“We have some of the best studio infrastructure for student-run media organizations in the country,” Robilotto said. “Many other student outlets are working with outdated equipment, but what we have rivals many for-profit, professional media outlets. Working with newest tools really helps set our students apart post-graduation and allows our broadcasters to focus on content creation rather than equipment repair.”

“Individuals find so much success due to how good our academics and media organizations are,” said Case, who is a technology education major. In addition to being a WNYO sportscaster, he is assistant sports editor at WTOP and multimedia editor for The Oswegonian — which shows the variety of opportunities students can attain at Oswego.

“The groups offer so much to broadcasting and communications majors along with other students on campus,” Case said. “From sports broadcasts, radio shows, live productions and newspapers, there are so many things students can do and they are done at such a high level in our media organizations.”

In addition to his award-winning radio show, Ladd is the editor-in-chief of The Oswegonian, while Valentino also is part of “Laker Connections,” the longest-running show on WTOP.

“The reason the media organizations have been so successful in my opinion is the teamwork and collaboration that they expose us to,” Ladd said. “It is a team effort to be able to have a successful broadcast or newspaper and the students here at Oswego are the most driven and humble students when it comes to media. We work hard and we look for opportunities to get better.”

If anybody in any major is interested in gaining hands-on media experience, “you’ll be able to do that on a daily basis or weekly basis,” Valentino said. “This is my passion, and what I’ve wanted to do since I was 12 years old. To finally be able to get that opportunity I jumped at the idea and I joined all three organizations, which I highly encourage.”

“The high-quality education we get at SUNY Oswego should not go unrecognized either,” Robilotto said. “It really helps lay the foundation for us to create content at a professional level. When you’re applying what you learn in class, it helps strengthen your skills and I would recommend that every broadcast and journalism major gets involved with the student media orgs as much as they can.”

“Over the years I have learned some very valuable skills from the classes I have taken which helped prepare me for what I would later experience in the ‘real world’ as I began my career in student media,” Ladd added. “Although, nothing compares to the hands-on experience you get at WTOP, WNYO and The Oswegonian. These have been the best three years of my life and I can’t wait to close it out (hopefully all back to normal) for my senior year.”

Robilotto hopes those who are able to enjoy the work of student media wherever they tune in or read can support that continued excellence in the future.

“For those who want to see the student media organizations thrive in the future I would strongly consider donating to the alumni foundation,” Robilotto said, which people can do via alumni.oswego.edu/give. “You can direct your donation right to the media organizations that you wish to support.”