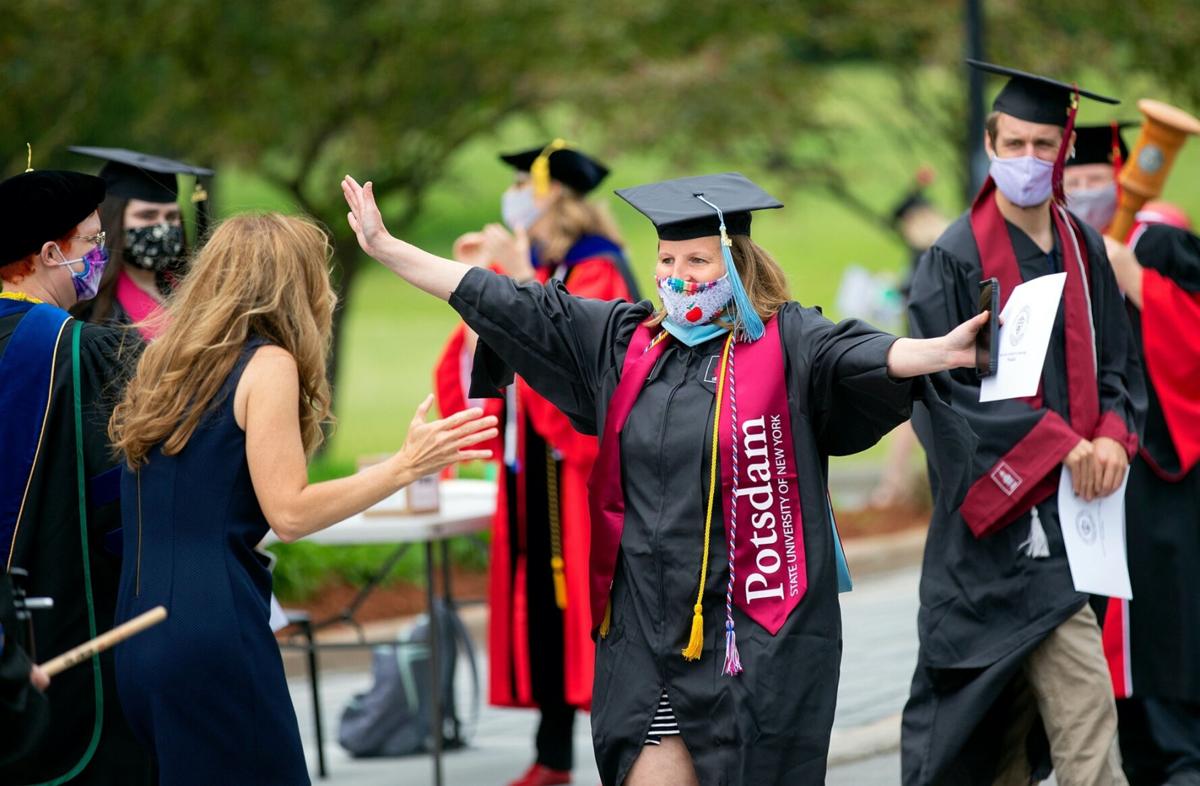 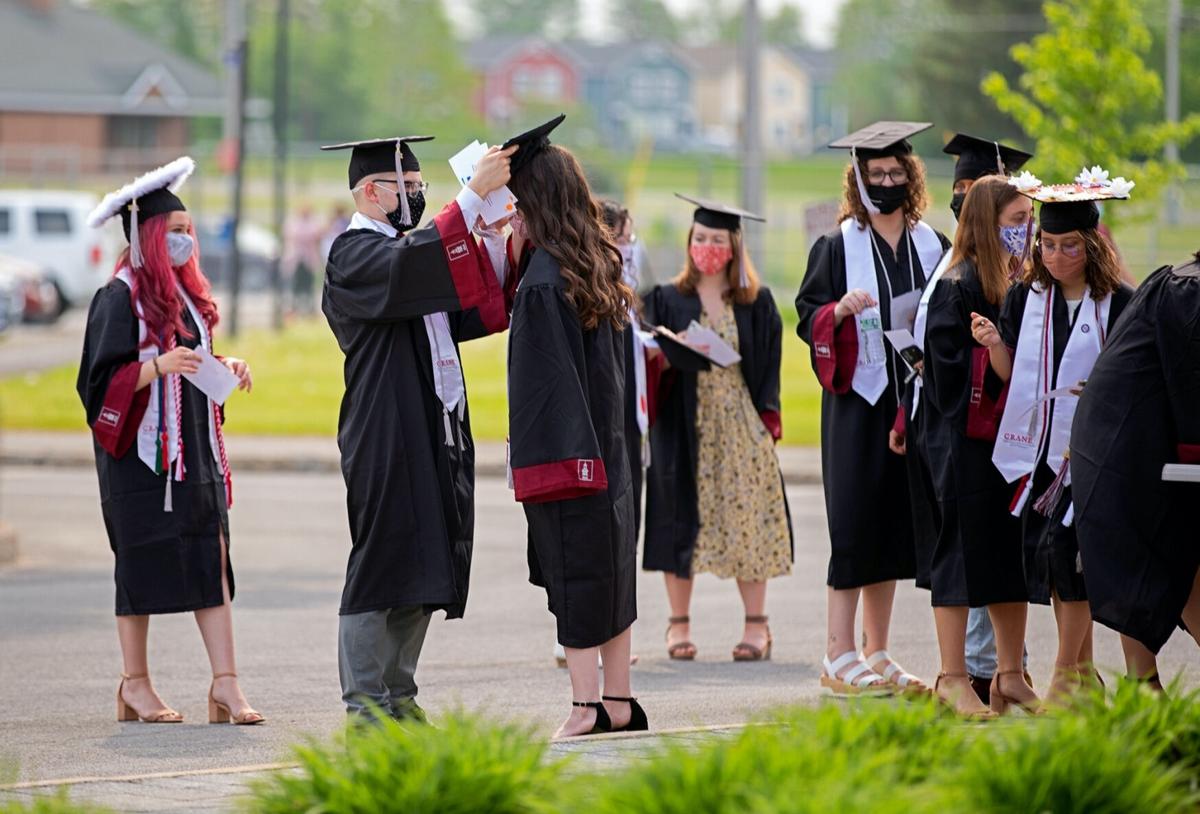 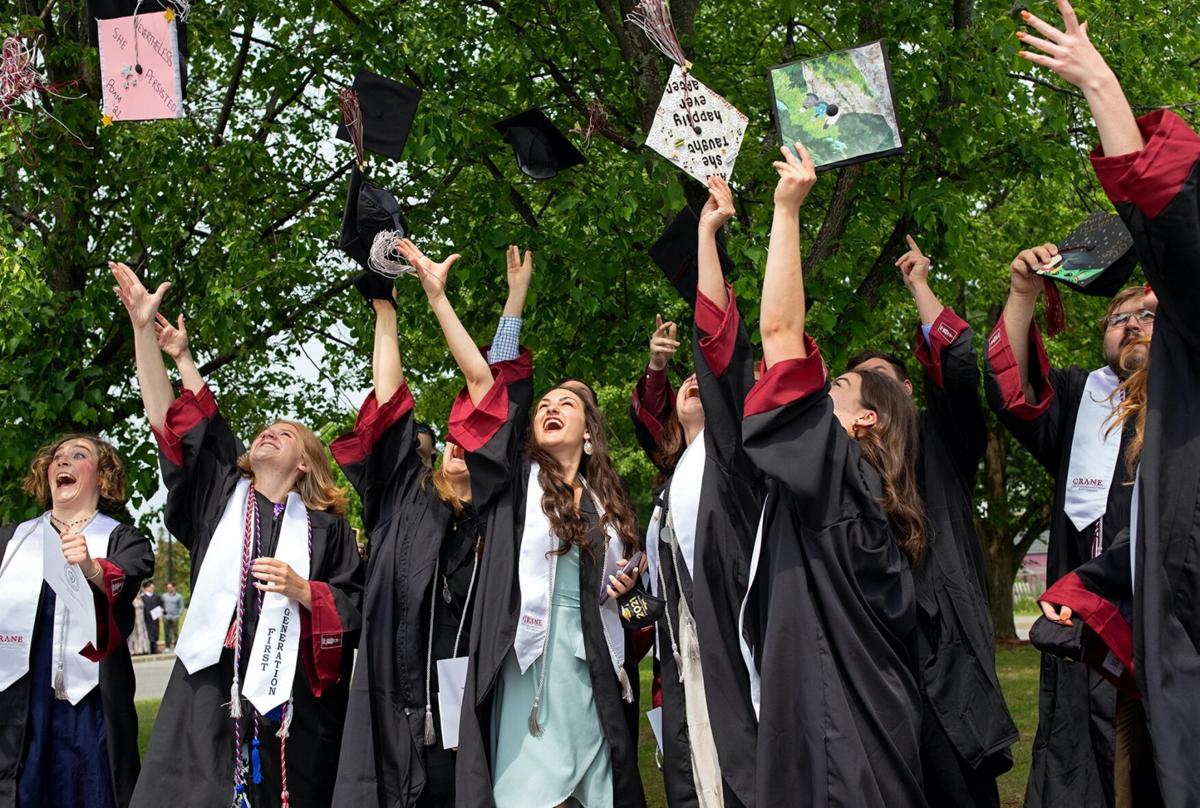 Tessa Spencer, ‘21, center, a double major in music education and music performance, tosses her cap in the air with her classmates Saturday morning after SUNY Potsdam’s first commencement ceremony of the day. SUNY Potsdam photo 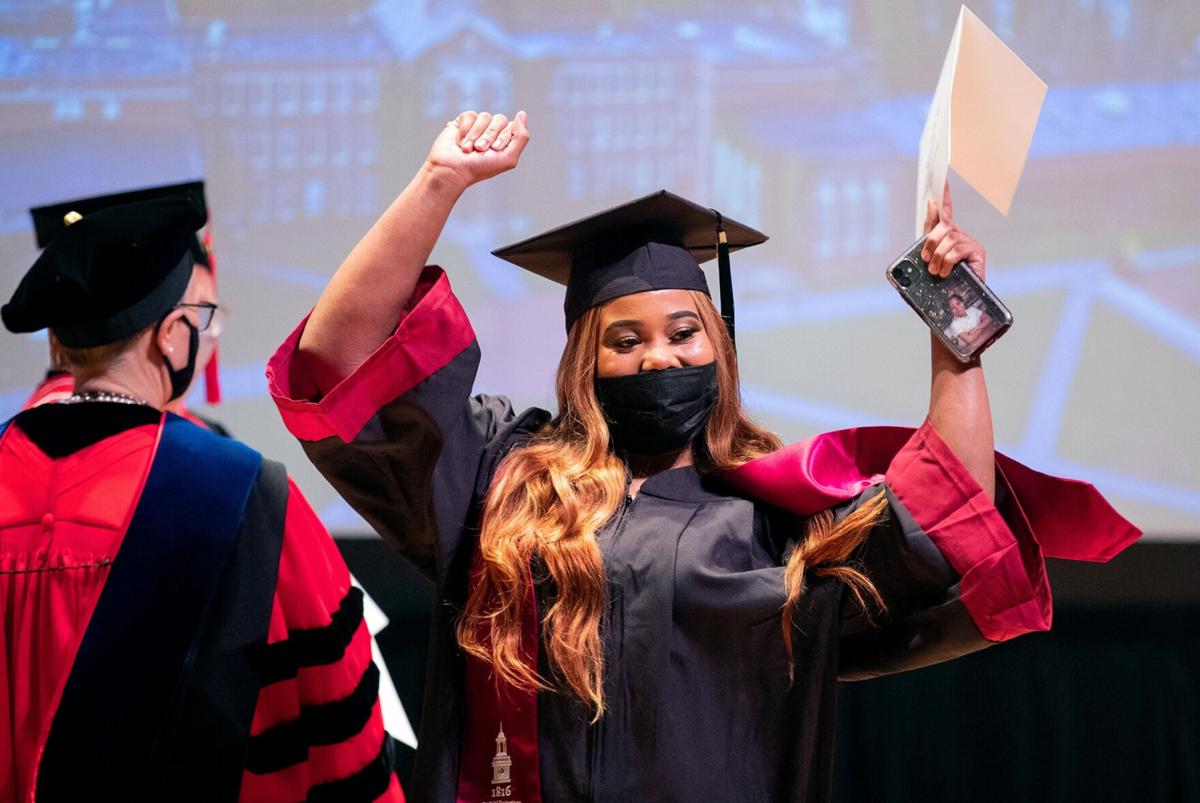 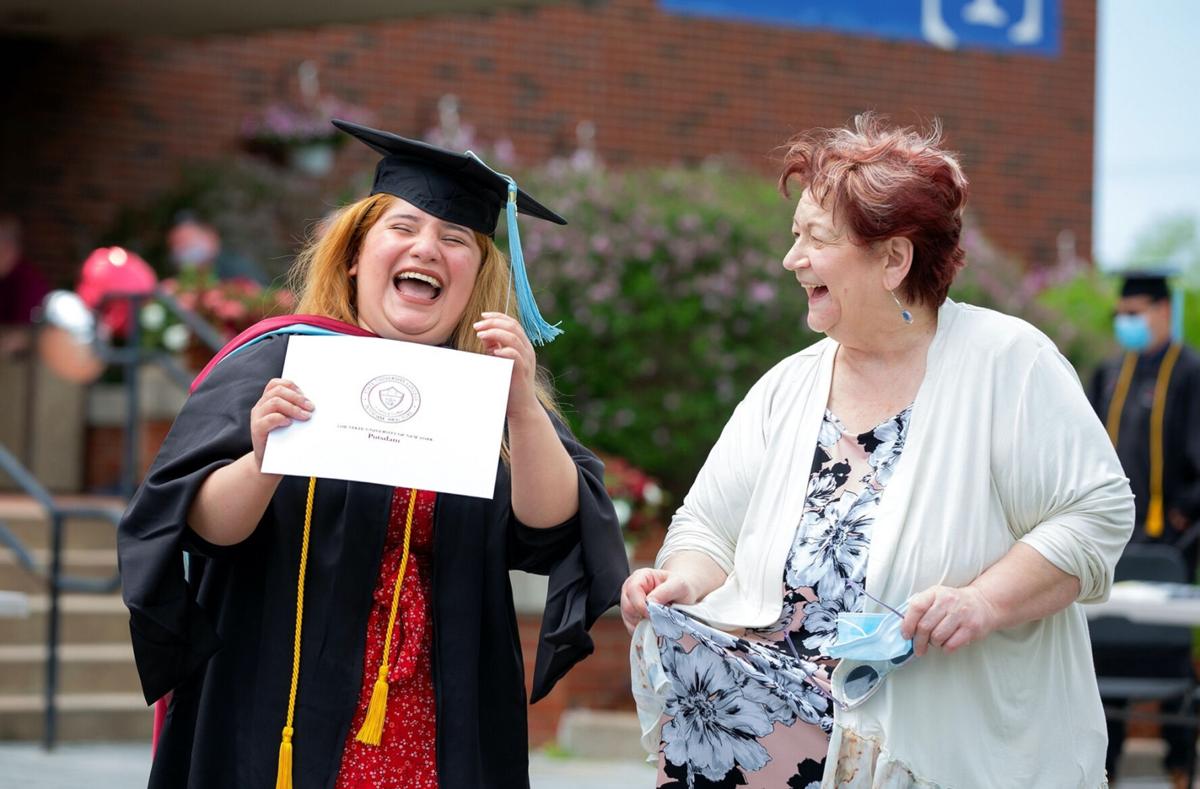 Tessa Spencer, ‘21, center, a double major in music education and music performance, tosses her cap in the air with her classmates Saturday morning after SUNY Potsdam’s first commencement ceremony of the day. SUNY Potsdam photo

POTSDAM — SUNY Potsdam honored its Class of 2021 with three commencement ceremonies Saturday at the Crane School of Music’s Helen M. Hosmer Concert Hall. The series marked the first time in more than a year Hosmer Hall welcomed groups of people.

The ceremonies, which featured student music performances and video remarks, were closed to guests and live streamed on YouTube.

Masked, in-person graduates were spaced out inside the hall and walked the stage with decked-out mortarboards. Graduates unable to attend in person were featured in a slideshow.

The day’s first ceremony honored graphic design, English, communications and arts majors, as well as music and performance grads from the Crane School of Music. Following the May 16 death of Lonel Woods, music professor and dean of Crane, the SUNY Potsdam and greater north country communities have mourned. President Esterberg delivered a tribute at the top of the ceremony.

“Dr. Woods put students first in everything he did, and I know that he would want us to celebrate you and all you have accomplished,” she said. “He would be laughing with the joy of your commencement, singing your achievements and encouraging you to find celebration and hope, optimism and communion, peace and love, on this important day. And so, I will honor Dr. Woods by honoring you, the graduates, and celebrating you.”

Earning her bachelor’s degree in early childhood education, Kanenishon Arquette, of the Akwesasne Mohawk Nation, recited the Ohen:ton Karikwatekhwen, or “The words before all else,” a greeting in the Mohawk language and in English translation.

Reykwaan Adorno sang “Lift Every Voice and Sing,” a hymn of liberation and hope often referred to as the “Black national anthem.”

Student Government Association President and 2021 graduate Cara Ramsaran delivered her remarks in a prepared video address interspersed with images of campus life. The politics major spoke about the urgency to affect change, in ways large and small, even in the face of fear.

“Congratulations to the class of 2021: You made it to graduation day despite our entire, whole world going sideways,” she said. “You have endured a global pandemic, social distancing and remote learning to make it here today. You have mapped out a path to graduation that was uncharted in an unsure world.”

Ms. Ramsaran urged her classmates to follow the example of people past and present who have fought to make the world a better place — from the pioneering Black writer and civil rights leader Ida B. Wells, to the late Supreme Court Justice Ruth Bader Ginsburg, to climate change activist Greta Thunberg and former SGA President Shane T. Shaul, ’79.

“They all changed the world for the better,” Ms. Ramsaran said. “Despite all odds, they surpassed hardships to fight for what they deemed important. You can make change by using your college education to make the world a better place. You can change the world. So, will you? I can’t wait to find out.”

After earning his degree in graphic design and new media, Alexis Diaz embraced his family members as they shed tears of pride.

“I’m the first in my family to graduate from college,” he said.

As graduates of biology, physics, chemistry, sociology and psychology programs, among others, lined up for the last ceremony of the day, classmates Evelyn Ruth Pierce Utter and Rodney Deleon had years between them and different academic interests. But they both shared an immense sense of pride for completing their degrees. Both also had family and friends watching from home.

“I was originally supposed to graduate in 1991, but then life got in the way,” Ms. Utter said. “I started again taking classes on and off to complete my degree in 2017. I finally did it.”

Graduating with a dual degree in sociology and criminal justice studies, Mr. Deleon was wearing stoles representing his Dominican heritage and his status as a first generation student.

“Now it’s time to figure out what the future holds,” he said.