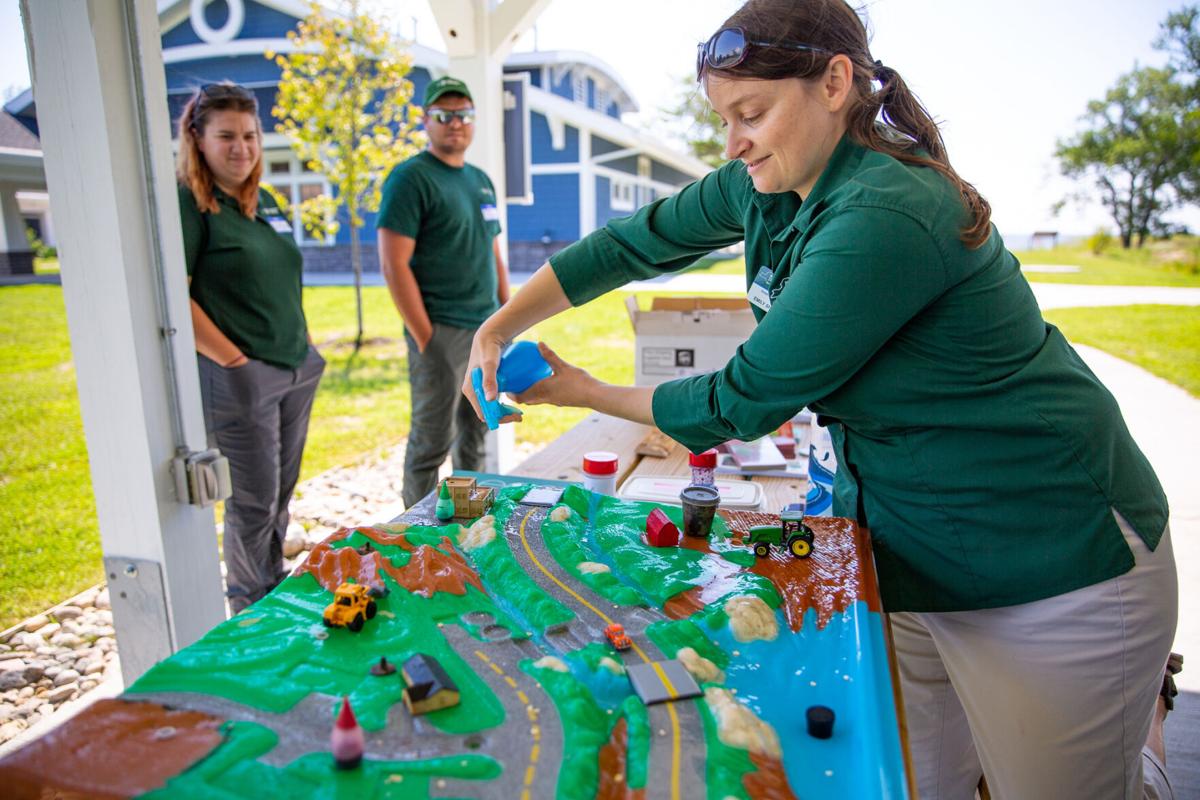 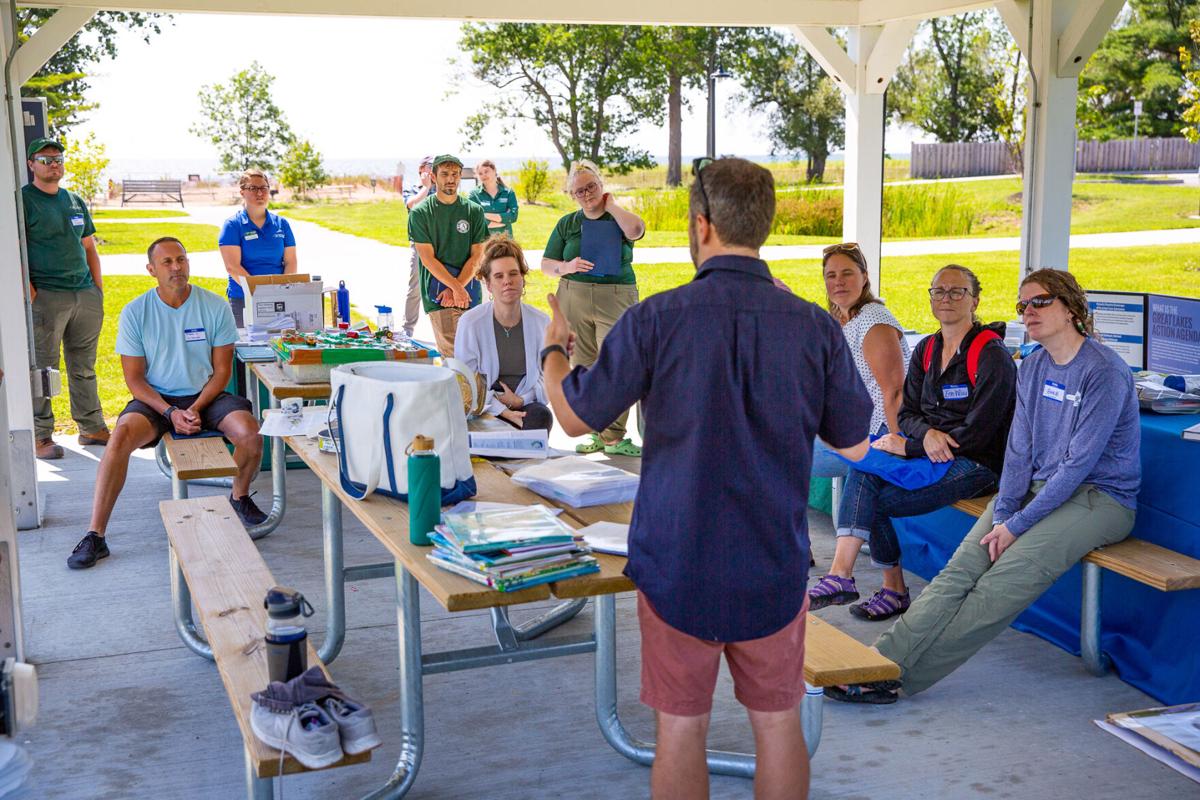 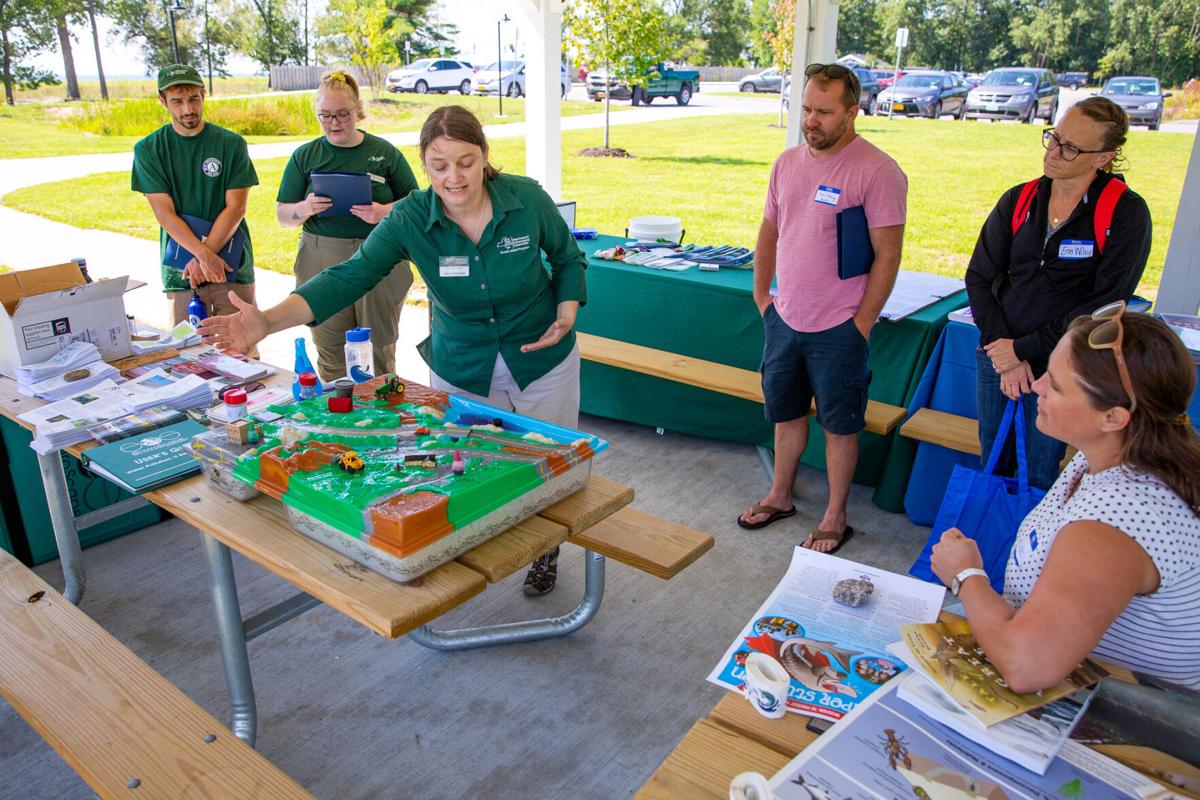 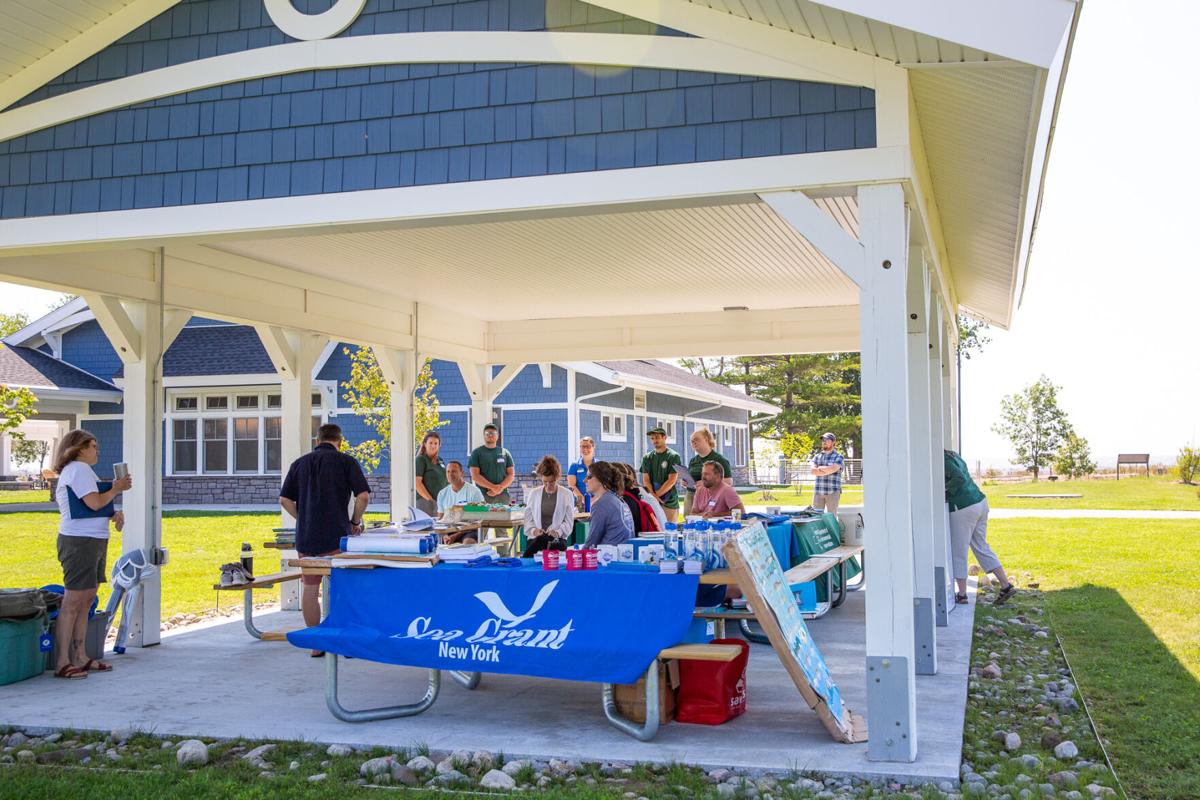 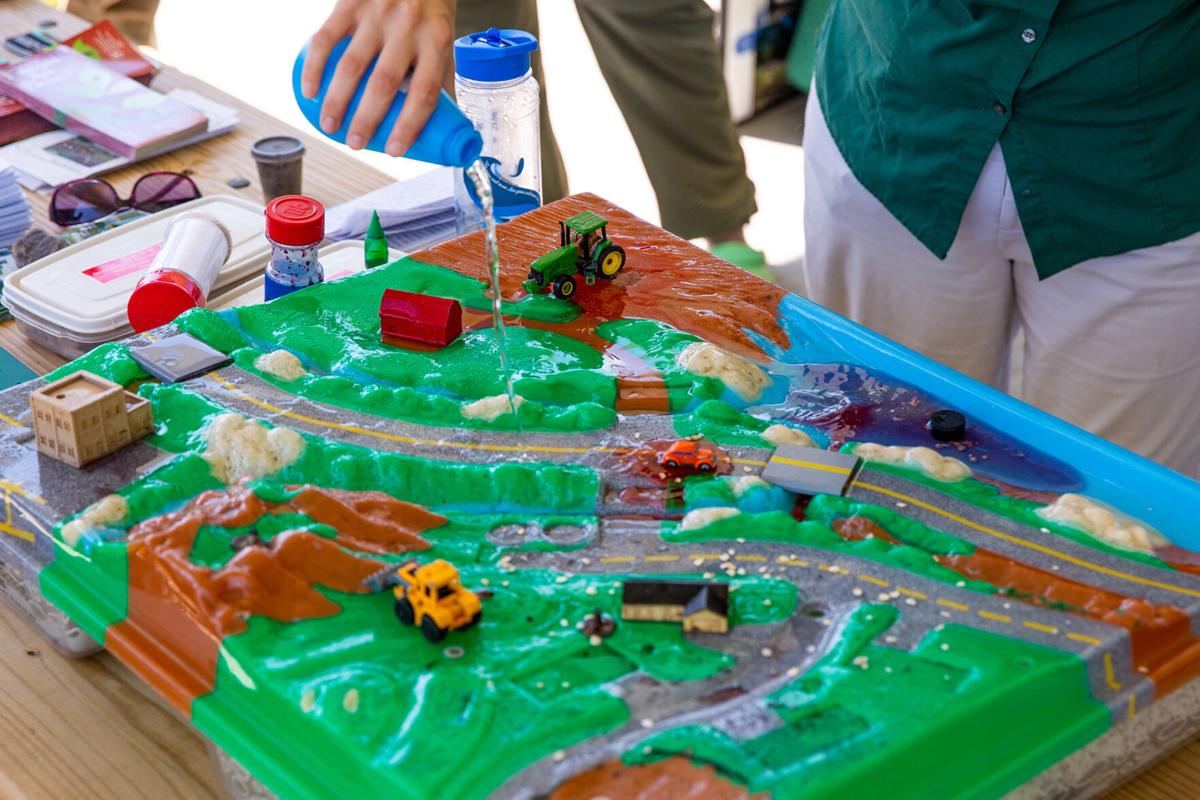 HENDERSON — Though the day started out a bit iffy in terms of weather, the skies cleared and the sun shone Wednesday afternoon, just in time for a Great Lakes Education Workshop aimed at educating teachers about various topics and resources available for their classrooms.

Under one of the pavilions at Southwick Beach State Park, representatives from New York Sea Grant, New York State Parks and the state Department of Environmental Conservation gathered to speak to and demonstrate for teachers from schools such as Belleville-Henderson, Carthage and South Jefferson, as well as from places like Central Square and Mexico in Oswego County.

“It’s all about supporting teachers and educators in their efforts to teach kids about the Great Lakes,” said Nate W. Drag, New York Sea Grant Great Lakes literacy specialist and associate director of the Great Lakes Program at the University at Buffalo. “Understanding what resources we have to share with them, what their needs are and connecting them with experts from state parks, DEC, Sea Grants — helping give it to the educators to help their students connect with all of our amazing local ecosystems and water bodies.”

Jennie S. Busch, a sixth-grade science teacher at Carthage Middle School, said she has done many different workshops in the past and they were each phenomenal.

“Human activity has had a really significant negative impact on our world and we need to raise generations of students, people, to live more sustainably,” she said. “They need to have a deep understanding of how their choices can impact our ecosystem and our world. It’s important to support teachers and inform us so we can really raise a generation that’s going to take action.”

This was one of four NYSG regional teach-the-teacher workshops this summer to be held at state parks. One was completed earlier at Evangola State Park, and in August, two more workshops will be held at Fair Haven State Park and Hamlin Beach State Park.

With a grant from the Disney Conservation Fund, New York Sea Grant developed a Lake Sturgeon Intermediate Curriculum with activities that meet Next Generation Science and Learning Standards for fourth grade through sixth grade. Collateral materials include digital worksheets, field sampling equipment, a fish tracking tag and the Tale of a Great White Fish book about a fish facing survival challenges similar to those threatening the lake sturgeon. Once abundant in New York state, the lake sturgeon species has been a state-designed threatened species since 1983.

“The curriculum release actually ties really well into some local lake sturgeon conservation milestones that have been achieved recently,” said New York Sea Grant Great Lakes Fisheries and Ecosystem Health Specialist Stacy L. Furgal. “For instance, one of our partners captured the very first female lake sturgeon that had eggs and was ready to spawn in the Genesee River. This is a big milestone because these fish were stocked 18 years ago and are just now reaching an age where they can reproduce. The Genesee River is an area of concern, so it’s even more of an accomplishment that these fish are returning — lake sturgeon are an ecosystem health indicator, so the fact that they’re coming back ready to spawn is showing that environment has gotten better.”

Teachers interested in obtaining a Lake Sturgeon Intermediate Curriculum with supplemental materials to encourage skill development in reading and comprehension, mathematics, ecology, graphing, history and the arts may contact Mr. Drag at 716-645-3610 or nwd4@cornell.edu.

Erin A. Wiley, a science teacher at South Jefferson, has been to a couple past workshops, but knew they added the sturgeon component, so she wanted to go and learn more about the sturgeon. She noted that the workshops are tremendously important because if you cannot get kids involved, nobody is going to preserve.

“Preservation is really what I teach my whole classroom, which was built around teaching from The Lorax: unless somebody cares a whole lot, nothing is going to change,” she said. “I repeat that all year long to my students.”

First timer Peter M. Zimmer, a stewardship specialist with the state parks system, said he wished there was more programming and workshops such as this when he was in school. He hopes that people will realize state parks are more than just a spot to go camping and state park employees are more than just lawn mowers and weed whackers, that they do environmental stewardship work as well, which can mean almost anything from invasive species removals to rare threatened and endangered species habitat restoration projects.

Fred O. Kowanes, of Central Square, attended a presentation a few years ago where trout in the classroom was mentioned, where students raise trout eggs and when they reach fingerling stage, they are released into local streams. He noted that while his students may not like reading and writing, many of them hunt and fish and are very outdoorsy, so they are naturally drawn to this sort of curriculum.

Ms. Furgal noted she is the product of one of her science teachers in high school taking her class out on a field trip where she was first introduced to Sea Grant, where they did a beach grass planting and she talked to a fisheries expert and realized that she could do that as a career. She said fast forward over a decade later and she has replaced the man she met that day, noting that teachers really can help to make a difference in the lives of their students.

“I think it’s really important for educators to be able to have resources that connect them to their local environment,” Ms. Furgal said. “I think historically, in classrooms it is more common you learn things about rain forests, but when it comes to your backyard, you might not have those resources handy, so for us to be able to provide that to classrooms that might not otherwise have access is huge.”