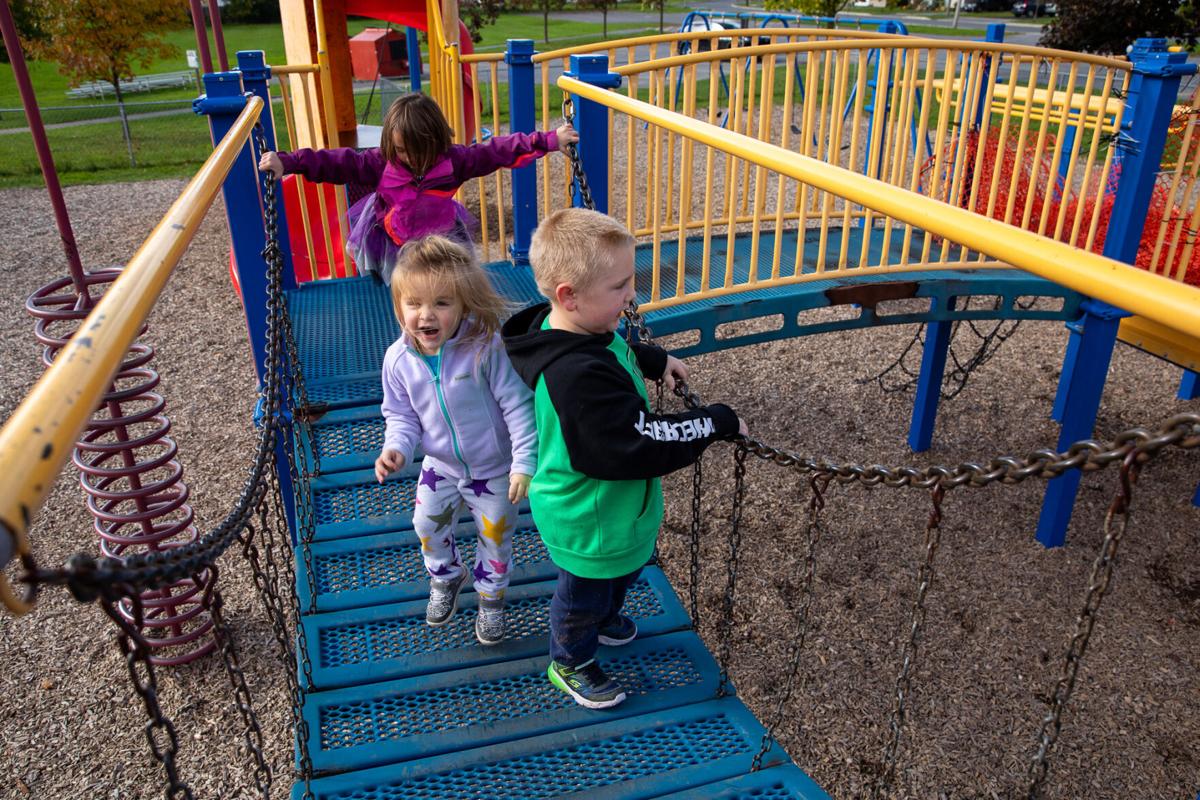 Front, siblings Fiona, 3, and Ryker Phillips, 5, with their 5-year-old cousin, Avery Phillips, who is visiting their family from Colorado, play on the playground at Knickerbocker Elementary School on Saturday in Watertown. Kara Dry/Watertown Daily Times 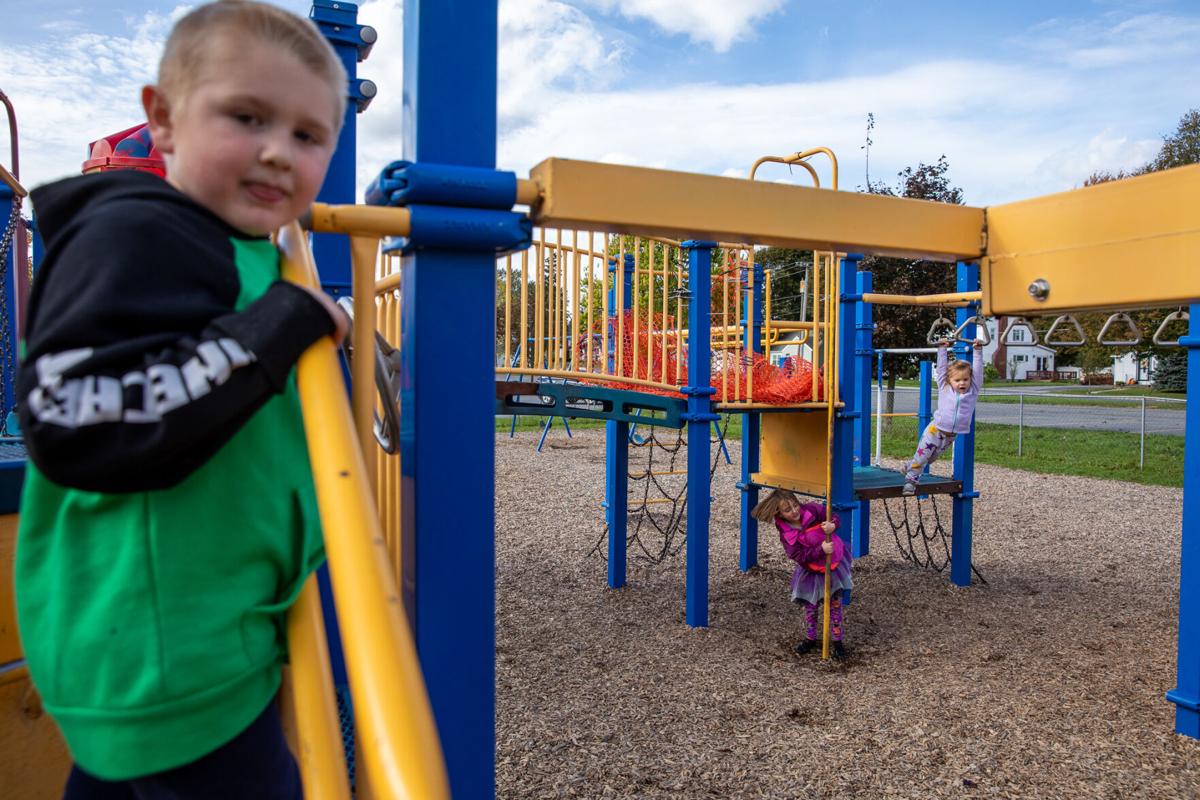 From left, Ryker Phillips and Avery Phillips, both 5, and 3-year-old Fiona, play on the Knickerbocker Elementary School playground on Saturday in Watertown. Kara Dry/Watertown Daily Times 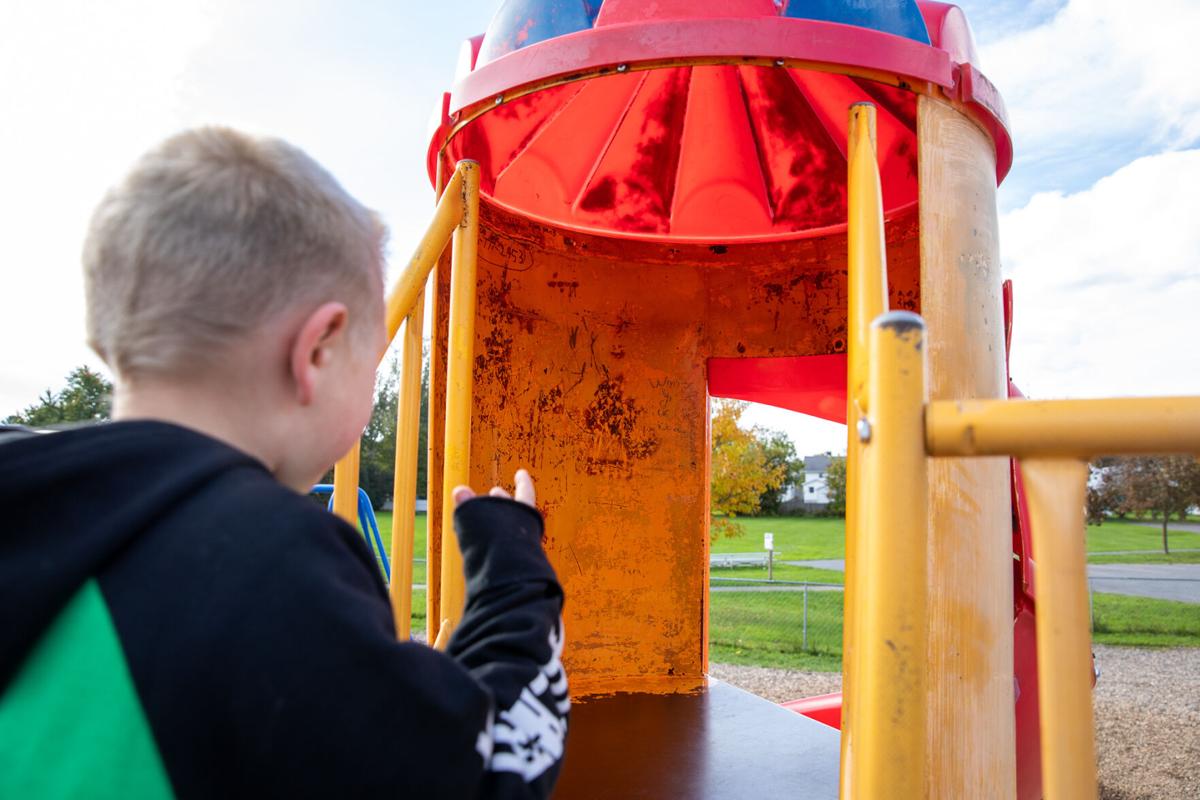 A student at Knickerbocker Elementary School, 5-year-old Ryker Phillips points out the state of the top of their twisty slide on the playground Saturday in Watertown. “It needs to be repainted or just cleaned up,” Ryker said. Kara Dry/Watertown Daily Times 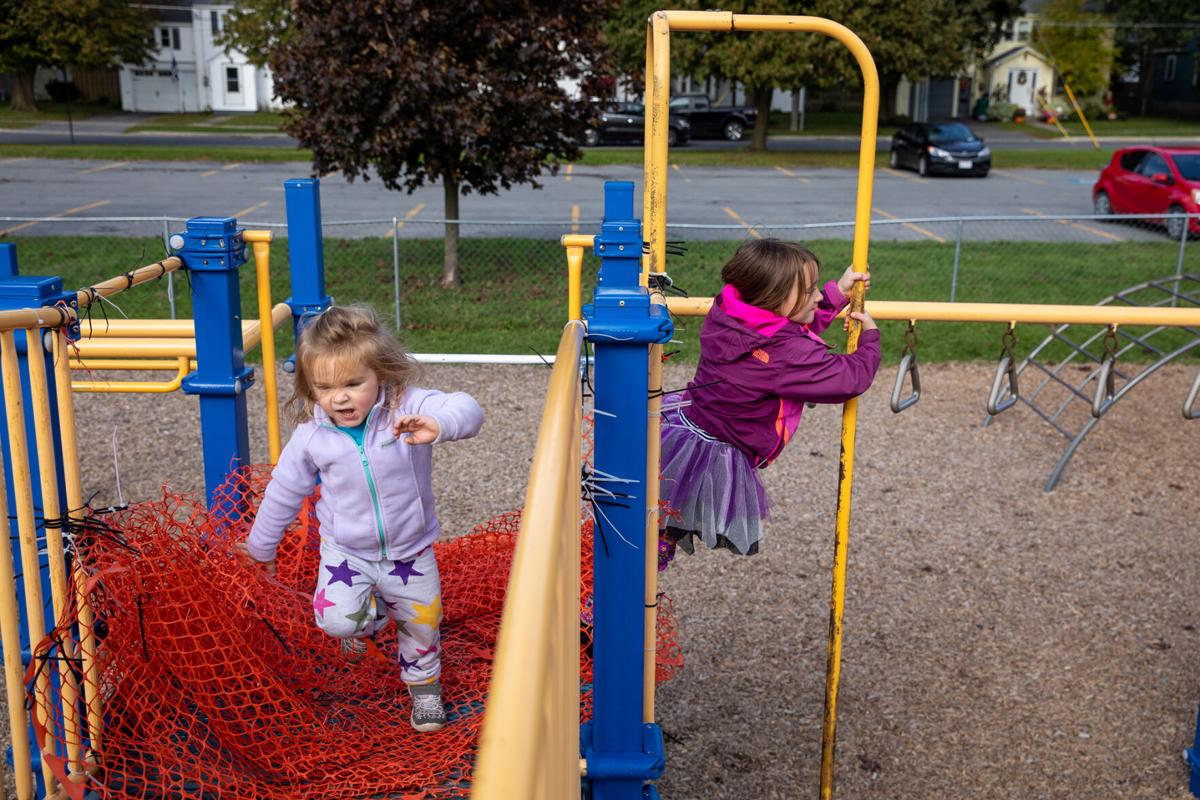 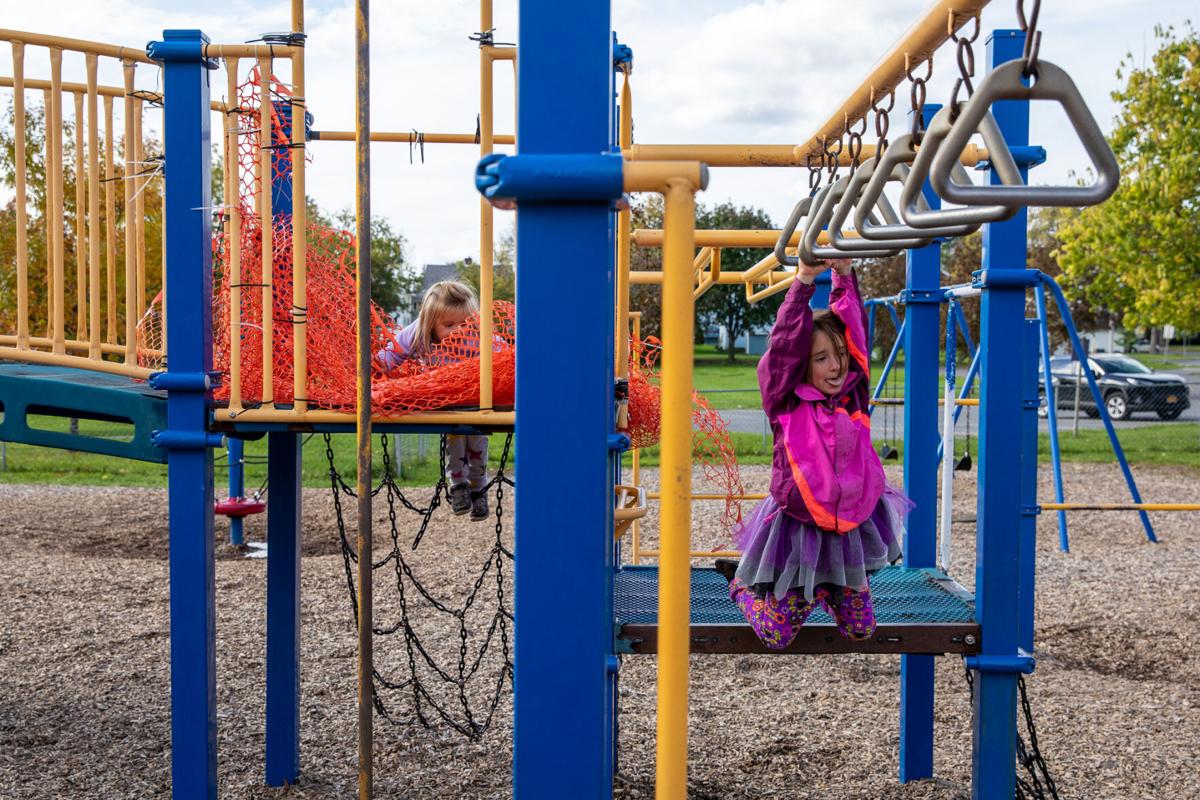 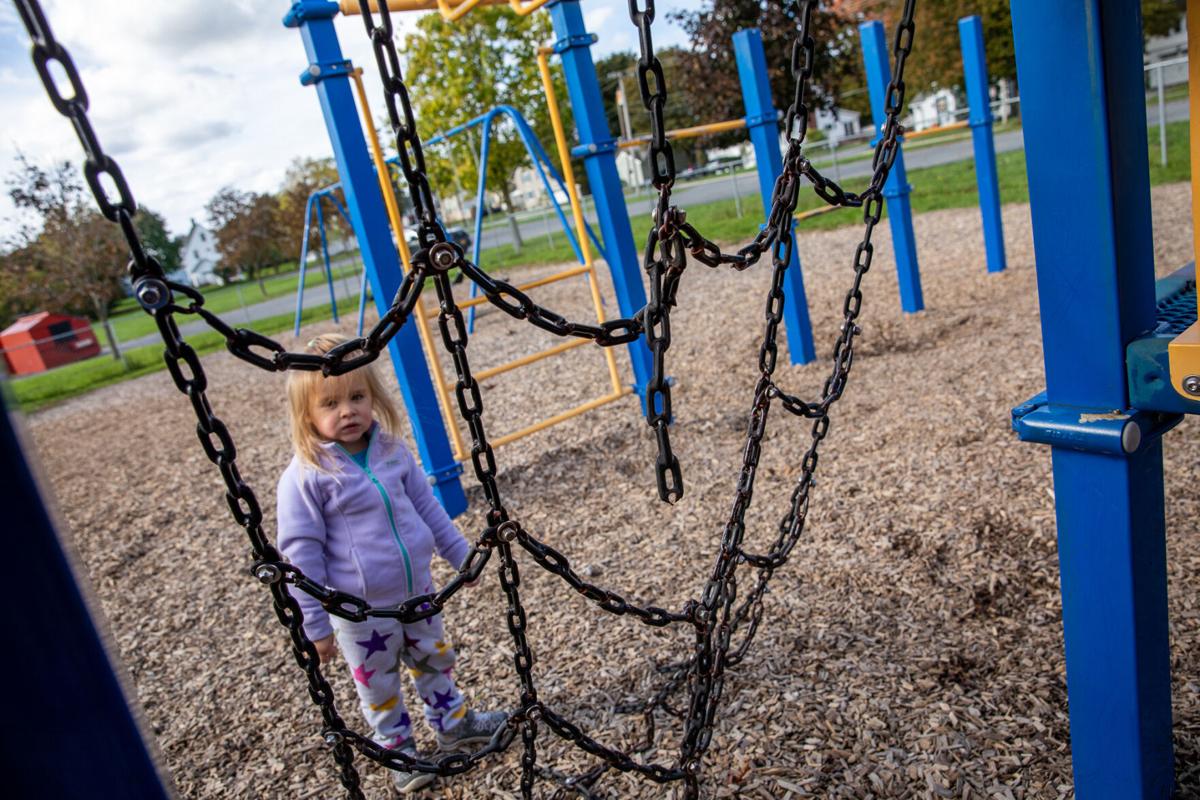 Fiona Phillips, 3, couldn’t get down the broken chain ladder at Knickerbocker Elementary and needed her grandma’s help to get off the playground equipment on Saturday. Kara Dry/Watertown Daily Times 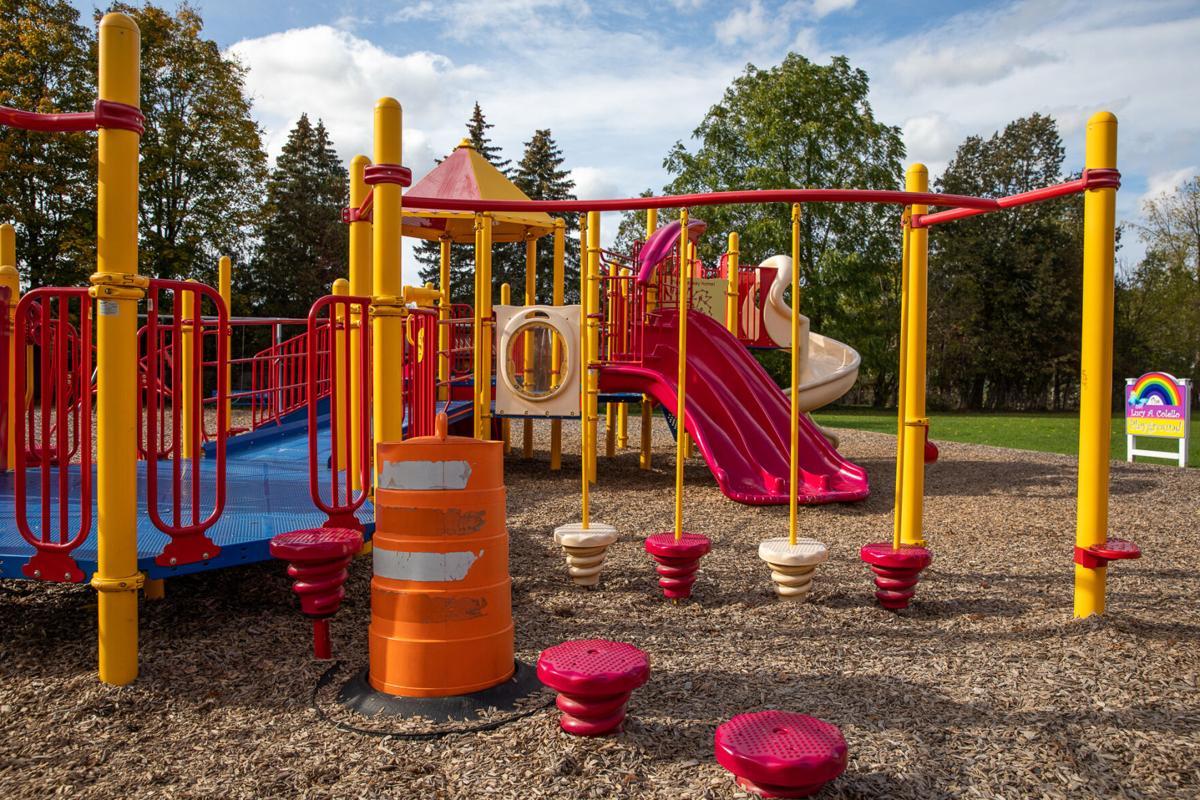 Front, siblings Fiona, 3, and Ryker Phillips, 5, with their 5-year-old cousin, Avery Phillips, who is visiting their family from Colorado, play on the playground at Knickerbocker Elementary School on Saturday in Watertown. Kara Dry/Watertown Daily Times

From left, Ryker Phillips and Avery Phillips, both 5, and 3-year-old Fiona, play on the Knickerbocker Elementary School playground on Saturday in Watertown. Kara Dry/Watertown Daily Times

WATERTOWN — Before injuries occurred due to old playground equipment, the Watertown City School District said in 2019 it was taking steps to make necessary updates to three elementary school playgrounds in the district: Ohio, Starbuck, and Knickerbocker.

To that end, $200,000 had been put aside for the 2019-20 school year for the playgrounds — the first time money had been allocated in the budget specifically for playgrounds, aside from annual allotments for woodchips — and planning had begun for what needed to be done at the various district playgrounds.

Now, in 2021, the work that the district had been planning years ago has still not been done and the funds reallocated to other projects deemed more essential at the time.

“We had money kind of earmarked for playgrounds, and if I recall correctly, when we were doing repairs to the high school swimming pool, we had a huge problem with the jets in the pool so it became an emergency project, and some of the money that was kind of earmarked at that point for playgrounds was put into that capital outlay project for the jets,” said Patricia B. LaBarr, district superintendent.

In the summer of 2020, the Watertown High School pool was out of commission, having been empty for months after rusted-out jets in its original galvanized piping caused leaks. Repairs for the jets totaled $111,500. By this time, again with playgrounds in the back of the mind, the COVID-19 pandemic had taken over most facets of life, slowing everything down. On top of that, one of the water heaters at Case Middle School started leaking, creating another emergency project that needed immediate action, bringing with it a price tag of around $67,000. Three years ago, the district replaced the front sidewalk at the highschool to make it ADA compliant and completed an asbestos abatement project totaling around $100,000.

“The pool jets came and then the hot water heater and here’s the thing — there’s always going to be critical need for something to be done,” Mrs. LaBarr said. “Playgrounds, it will take us forever if we make them part of a capital project, so we have to really think outside of the box on how can we make them a priority.”

Since the original planning for the playgrounds, the district has welcomed a new director of facilities: Brian Arias. Now that he’s been with the district for some time, Mrs. LaBarr said it is time to bring him up to speed as to where things are at with the playgrounds district wide, and then take a look at what needs to be done.

According to Mrs. LaBarr, it’s not that the district playgrounds have been taken off the table completely, they have just been set to the side for awhile as everyone continues to deal with COVID and adjust to having students back.

“Trying to meet their social and emotional needs and the day to days of getting our unvaccinated staff tested, there’s still a lot of work that’s being done,” she said. “I think that as we start to hopefully see a downward trend in our COVID cases, we can start bringing those back to the forefront.”

To that end, Mrs. LaBarr said within the next month, the district will most likely begin initial walkthroughs of the playgrounds again, calling in some of the same companies from a few years ago, before the winter and then plan next steps during the colder months. Then in the spring, a long-term plan can be formed and be ready to implement.

As for the cost of the project, with prices for labor and materials higher than average due to COVID, it is largely unknown at this time. Mrs. LaBarr said it will be one of the first priority items for the project to do walkthroughs and assessments to figure that element out. There is also hope that by the time the project begins, costs that have risen due to COVID may be on the decline, so the district is looking to time things as best it can so it is able to do as much as possible with the money it allocates for this endeavor.

With six schools, the five primaries and Wiley, there is a need to prioritize. Mrs. LaBarr said she recognizes that every school is going to think that their school is the priority, but when looking at each playground and sharing the status of each with schools and PTOs, it should become apparent which need to be prioritized.

“I’d say if you were to visit the Sherman playground or the Wiley playground, they’re in really great shape,” Mrs. LaBarr said. “Ohio’s playground is not bad and North has a lot to offer. I think at Knickerbocker, it’s time, they need some sort of an upgrade. Not to say that the other schools don’t, I think that’s part of the evaluation of all the playgrounds, but Knickerbocker will most likely be a priority.”

She said the playground is outdated and that in the past, the previous director of facilities took things down from the playground that had been deemed unsafe. Pieces of equipment that still have issues currently feature some netting as they await either repairs or replacement.

Typically, a standard playground area should see a new installation or update within eight to 10 years after its original installation date, according to Superior Recreational Products.

According to the Times archives, Starbuck Elementary School’s playground was built by parent volunteers in September of 1992. Installed in 1993 by Pettinelli & Associates of Burlington, Vt., with equipment from Miracle Recreation, Ohio and Knickerbocker are also outdated.

As for how the future playground projects will be funded in lieu of the money that was allocated years ago, Mrs. LaBarr said she doesn’t know of any specific grants at the moment, but if there is one available, the district would certainly love to know more about it.

“It’s going to be taking a look at our budget and seeing where we can fit that, that’s all part of the long term plan anyway,” she said. “I’m sitting here looking at the Wiley playground right now and there’s a few pieces of equipment that did come from a grant back when I was a principal, so a few pieces were added to the work that was done by the PTO. If we can take advantage of some grants, if we can budget some, if PTOs want to partner — I think it’s got to be a total community effort.”

Mrs. LaBarr in 2019 said the district contacted the company Parkitects to come and look at some of WCSD’s sites. A consultant, Karen O’Connor of the Parkitects Central New York Office, visited each of the three sites in 2019 to assess damages and come up with a plan for what would need to be done to repair the playgrounds, as well as update them. Mrs. LaBarr confirmed that the district will once again be seeking the input of Parkitects moving forward.

Because the district wishes to become ADA compliant with its playgrounds, one of the ideas in the past was to meet with a physical therapist and others that work with physically and sensory challenged children to see what they can do to meet their needs. The Department of Justice’s Americans with Disabilities Act of 1990 is a federal law prohibiting discrimination on the basis of disability, ensuring equal access and benefit to all people.

Stemming from the ADA, the 2010 ADA Standards for Accessible Design created accessibility standards for public facilities that can be enforced under a federal court of law. According to the ADA, an accessible playground is one that offers a range of play experiences to children of varying abilities.

Mrs. LaBarr said she is looking forward to getting back into a regular routine, careful to not use the word “normal” as things haven’t been normal for quite some time. Part of the return to routine includes the playgrounds, work that Mrs. LaBarr said she looks forward to as a great way to start to think about how the district can do great things for kids.

“They’ve been through an awful lot the past three school years and part of that routine is having opportunities to play on a playground,” she said. “With our younger programs making play a big part of the day, we know how important those playgrounds are.”