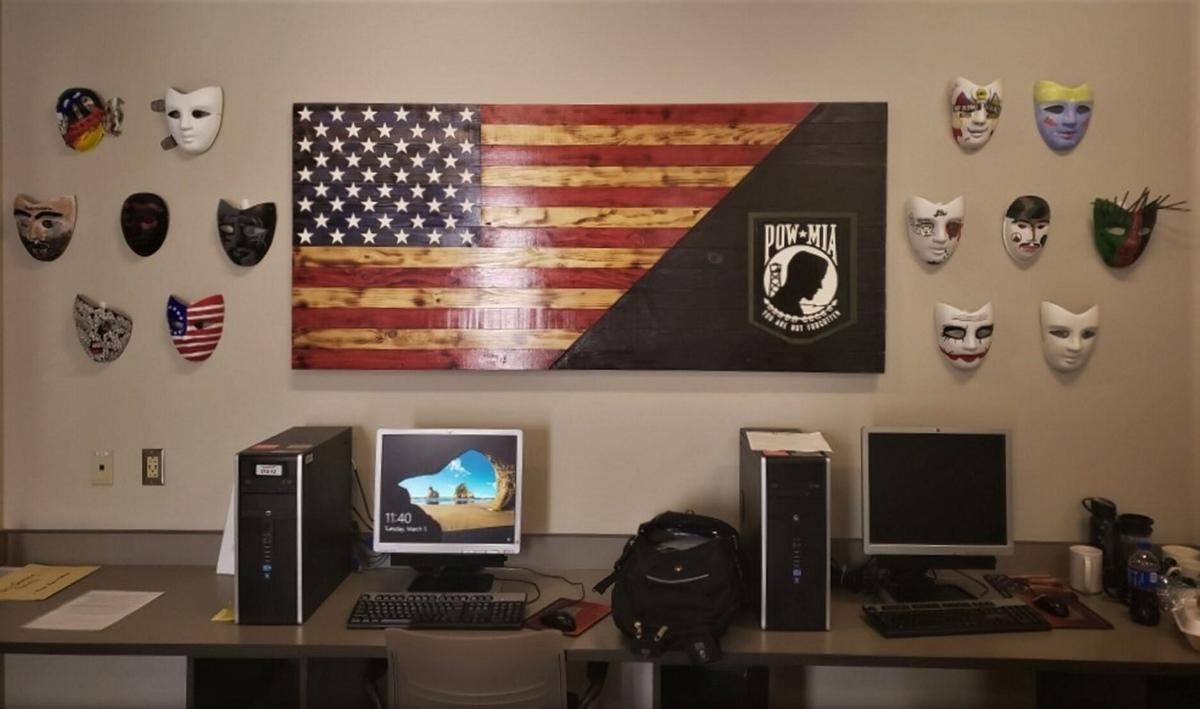 Veteran-made masks on display at Jefferson Community College, along with a large flag piece by veteran Darren P. Lemorta. Seven masks were chosen to be sent to the U.S. Embassy in London to be displayed as part of a 9/11 remembrance exhibit next month. Provided photo 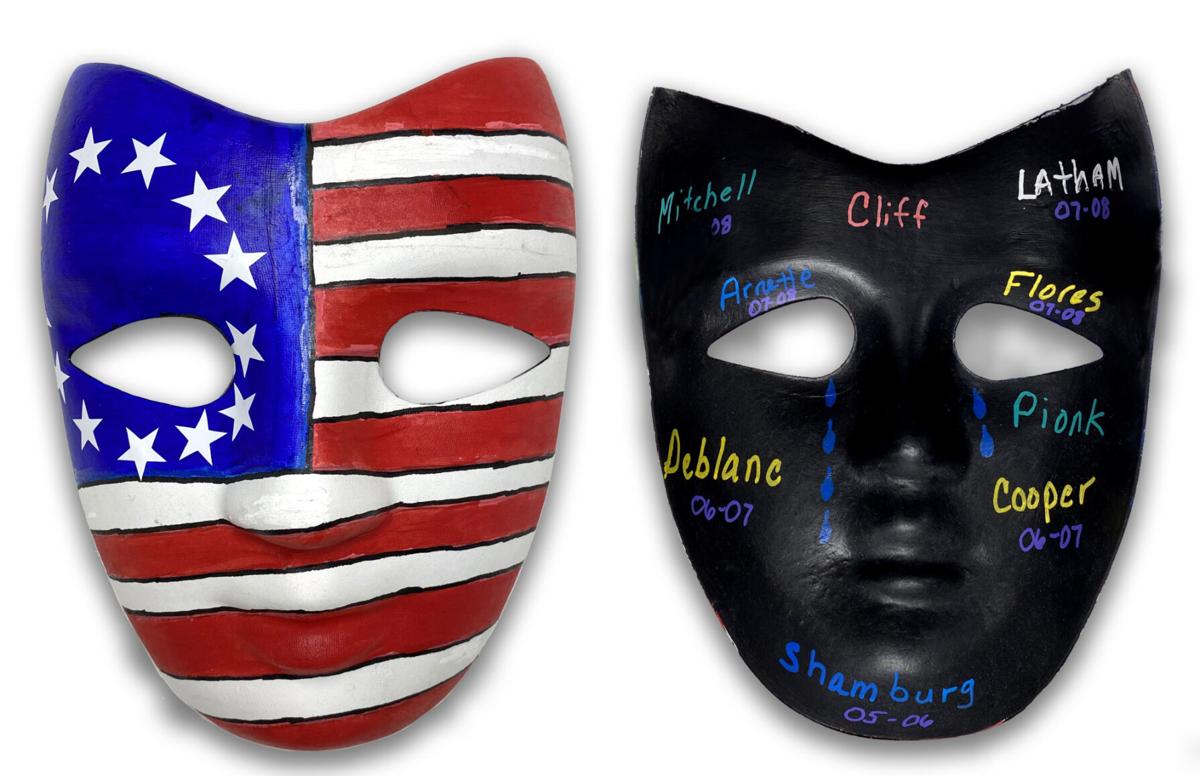 The “outside/inside” mask created by veteran Darren P. Lemorta, to be displayed next month at the U.S. Embassy in London. Photo courtesy of David M. Bowhall 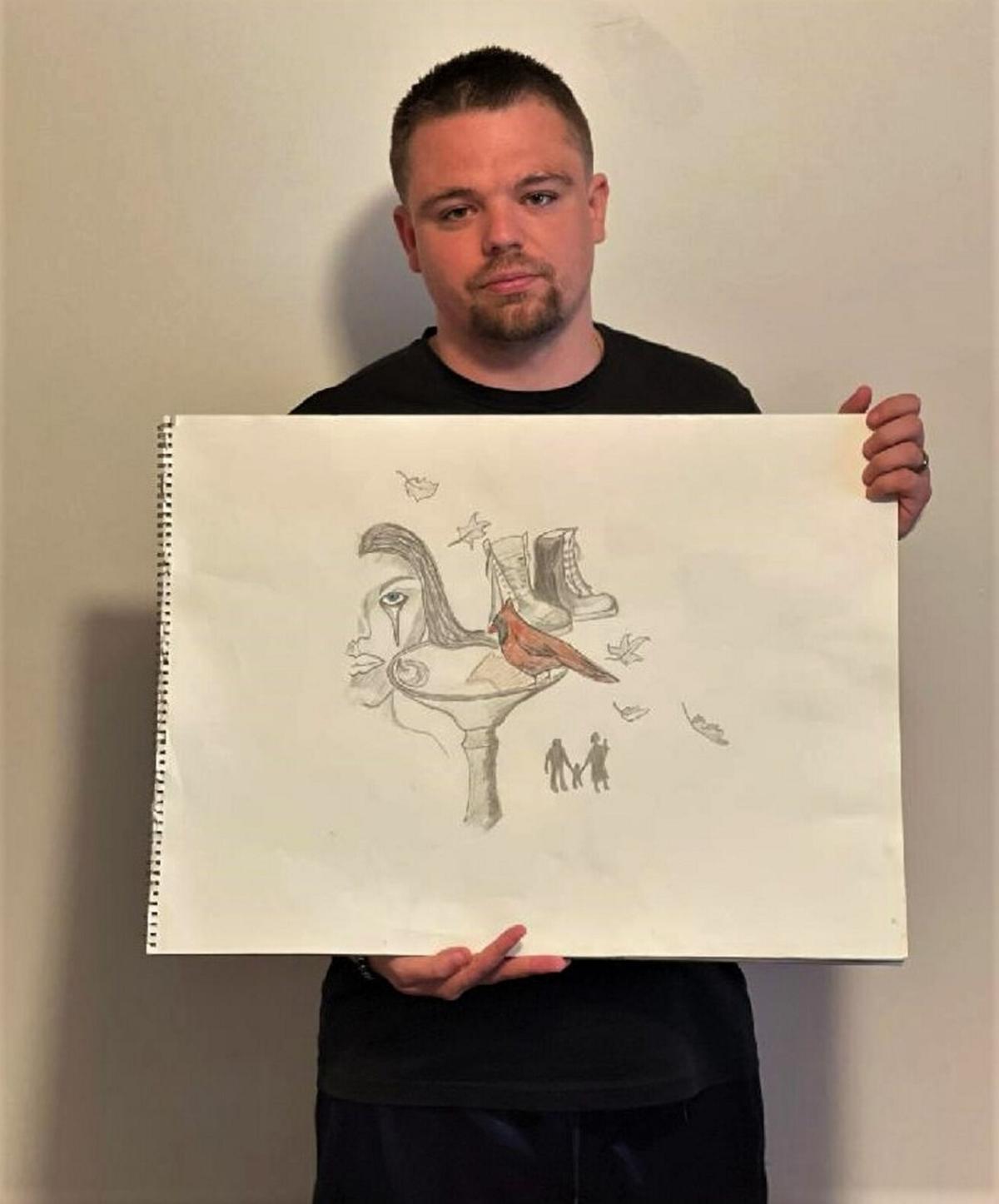 Jeremy M. Bombardier holds his art piece that symbolizes a mother who lost her husband overseas. He said the cardinal represents an angel visiting from heaven. Provided photo 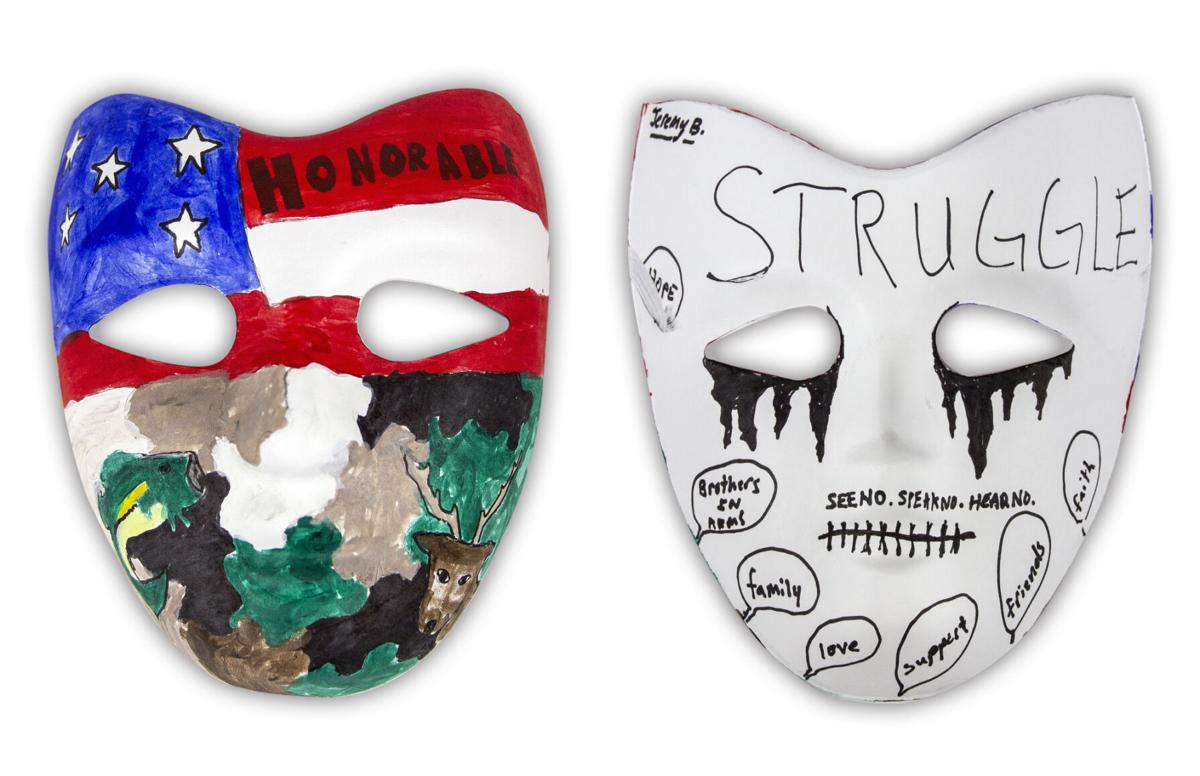 The “outside/inside” mask created by veteran Jeremy M. Bombardier, to be displayed next month at the U.S. Embassy in London. Photo courtesy of David M. Bowhall

Veteran-made masks on display at Jefferson Community College, along with a large flag piece by veteran Darren P. Lemorta. Seven masks were chosen to be sent to the U.S. Embassy in London to be displayed as part of a 9/11 remembrance exhibit next month. Provided photo

The “outside/inside” mask created by veteran Darren P. Lemorta, to be displayed next month at the U.S. Embassy in London. Photo courtesy of David M. Bowhall

Jeremy M. Bombardier holds his art piece that symbolizes a mother who lost her husband overseas. He said the cardinal represents an angel visiting from heaven. Provided photo

The “outside/inside” mask created by veteran Jeremy M. Bombardier, to be displayed next month at the U.S. Embassy in London. Photo courtesy of David M. Bowhall

WATERTOWN — What people display outwardly is oftentimes not the whole story. Internal conflict can usually be masked, with those suffering left to deal with it on their own and those around them sometimes oblivious to what is beneath the surface.

To highlight this, the artwork of seven Jefferson Community College veteran students was selected by the U.S. Department of State to be included in the exhibit And Yet We Rise: 20 Years Remembrance and Reflection of September 11th, opening at the U.S. Embassy in London on Sept. 1 and virtually at www.Cuseum.com.

“Inside/outside masks” were created by the students during their Dialogues of Honor and Sacrifice: Soldiers’ Experiences in the Civil War and the Vietnam War, also known as Dialogues On War, course made possible by a National Endowment for the Humanities grant JCC received in 2018. The point of the masks was to show how the veterans feel they are perceived on the outside, and how they feel themselves on the inside.

Jeremy M. Bombardier, 29, of Watertown, was attending classes at JCC for art therapy when he took the course. He has since completed all coursework he can at JCC, and will need to transfer to another institution to finish his degree.

Mr. Bombardier served eight years active duty with the Army before he was medically retired. He hopes to one day become a therapist and help fellow veterans. With art therapy, veterans can receive help dealing with things like anxiety, PTSD, depression and more in a more comfortable setting, because many don’t like to talk to people professionally, Mr. Bombardier said.

Among veterans who have served since the Sept. 11, 2001, attacks, about one in five experiences mental health issues, including PTSD, major depression and anxiety, according to the RAND Corporation.

“What you do is you paint the outside of the mask the way people on the outside view you, and then on the inside is how you’re going to view yourself,” Mr. Bombardier said. “You always want to improve the inside, because a lot of us, we’re always thinking negative about ourselves, and we need to turn that stuff into a positive.”

Dr. Ronald R. Palmer, professor of history at JCC, initiated the development of Dialogues On War to help veterans gain a deeper understanding of their time spent in the military and combat experience through the lens of the humanities. More than 40% of JCC’s enrollment is comprised of veterans, active duty military and their family members.

In addition to the development of Dialogues On War, veterans in the program traveled to the war memorials in Washington, D.C., and historic battle sites in Gettysburg, Pa.

The course gained national exposure when an article, “Warrior Lit,” was printed in the winter 2019 issue of Humanities, the magazine of the National Endowment for the Humanities. As a result, the U.S. Department of State made an inquiry to the college about incorporating the veterans’ artwork in the Sept. 11 exhibit in London.

“Being asked to share our students’ work in this 9/11 remembrance exhibit is truly an honor,” Dr. Palmer said. “For the students who fought in Iraq and Afghanistan, 9/11 was a call to duty. They now have a chance through their masks to engage in dialogues on war and its aftermath. It is also a tremendous honor for JCC, demonstrating the power of collaboration and innovation in serving our students, and our special relationship with the 10th Mountain Division.”

Mr. Bombardier shared that since he left the military, he has been in a dark place, so he did gray coloring on the inside of his mask along with words such as struggle, faith, support and hope. On the outside, he said people view him as a patriot because he was a military member, so he put a flag on the front, along with a visual representation of his identity as an avid fisherman and hunter.

“The newer soldiers coming in, some may not realize how 9/11 had an impact on what’s going on today, but being that I served as early as I did, it’s an honor because that’s one of the reasons why I enlisted in the military, to fight for our freedoms,” Mr. Bombardier said. “It’s really an honor to be recognized like that.”

For those feeling helpless, Mr. Bombardier encouraged seeking help or doing things to stay active, noting that art has kept him active and allowed him to express himself.

Mr. Bombardier’s mask, along with the others that were chosen, will be on display along with the United States flag that hung at the exit terminal of Flight 93 at Newark International Airport in New Jersey on Sept. 12, 2001; objects left on the U.S. Embassy steps in London as a show of grief and reflection for the United States; the Flag of Remembrance, which is 22.4 feet high and 25.4 feet wide and showcases the faces and names of 9/11 victims and photographs of uniformed first responders and civilians; a photo of the United States flag painted on the side of a barn in Clinton Corners on Sept. 12, 2001, by neighborhood farmers and photographed by Mary Hilliard; and more.

Prior to the preparation of the masks for shipment overseas, the artwork was photographed by David M. Bowhall, graphic designer at JCC, for later inclusion in a printed publication of the U.S. Department of State Office of Cultural Heritage.

Darren P. Lemorta, 46, was born and raised in Schenectady, and settled in Great Bend after 21 years with the Army. He attended JCC for four years after leaving the service in 2015 and received degrees in both criminal justice and IT. He currently works for the Fort Drum NEC-Network Enterprise Center.

When he retired, he said he was in a bit of a black hole. He said the Dialogues on War course at JCC was a form of therapy helping veterans come together and talk about things that were bothering them.

“I’m still very patriotic, so that’s why I wanted to do the American flag part on the outside,” Mr. Lemorta said of his mask made during the course. “Unfortunately, the inside is painted black with some blue tears coming down my eyes with the names of friends and soldiers that I lost in combat.”

When he was told his mask was among those chosen to be sent to London, he was excited by the opportunity and honored to be included. He said he felt proud that he was still able to serve, in a way, this time through his feelings, even after retirement. He hopes he will be able to go overseas to see the exhibit for himself when it’s open.