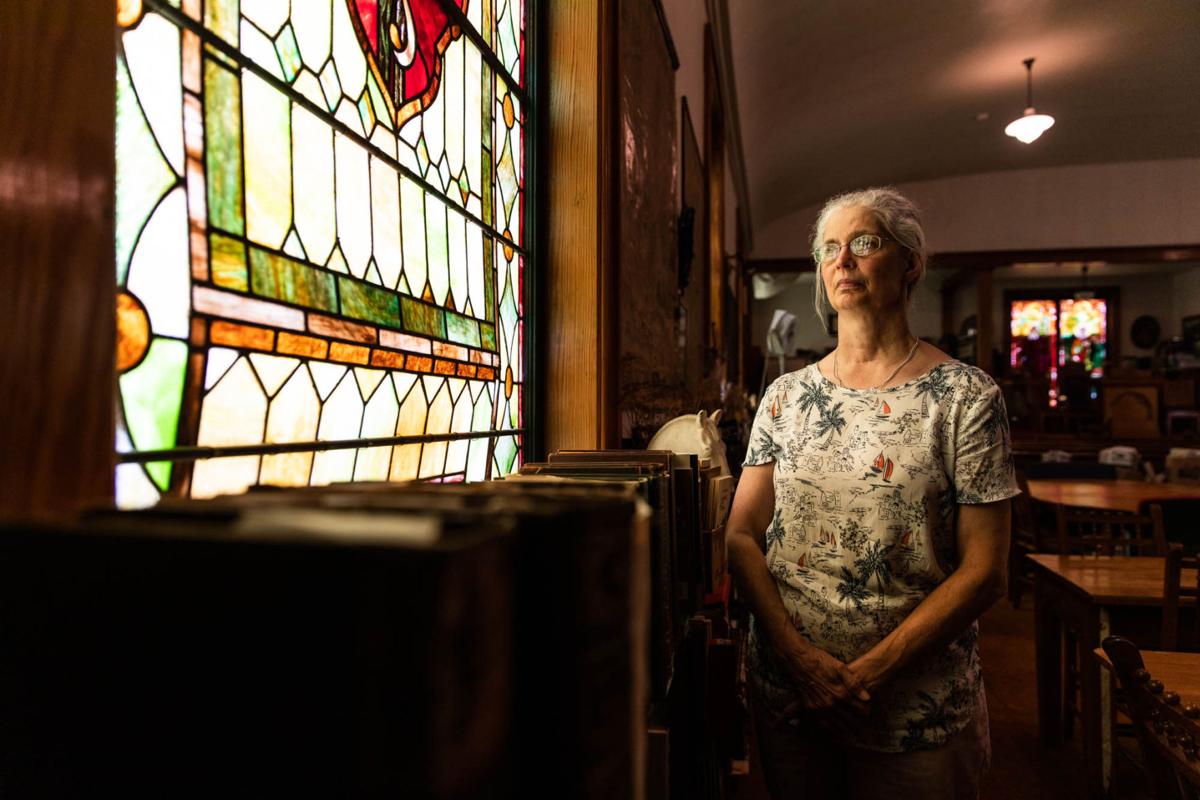 Elaine J. Scott, of the Henderson Historical Society,stands near one of the many stained glass windows on Friday at the society and museum in Henderson. Sydney Schaefer/Watertown Daily Times 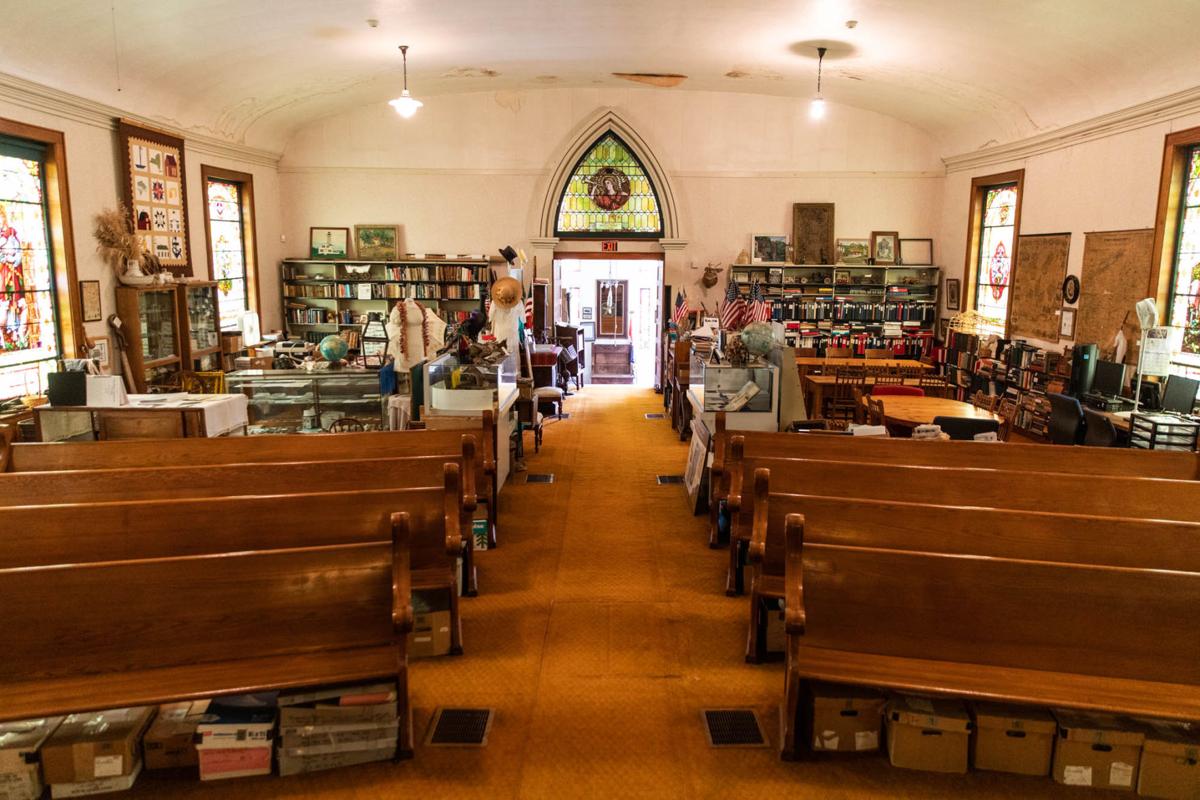 Inside the Henderson Historical Society and Museum in Henderson. Sydney Schaefer/Watertown Daily Times 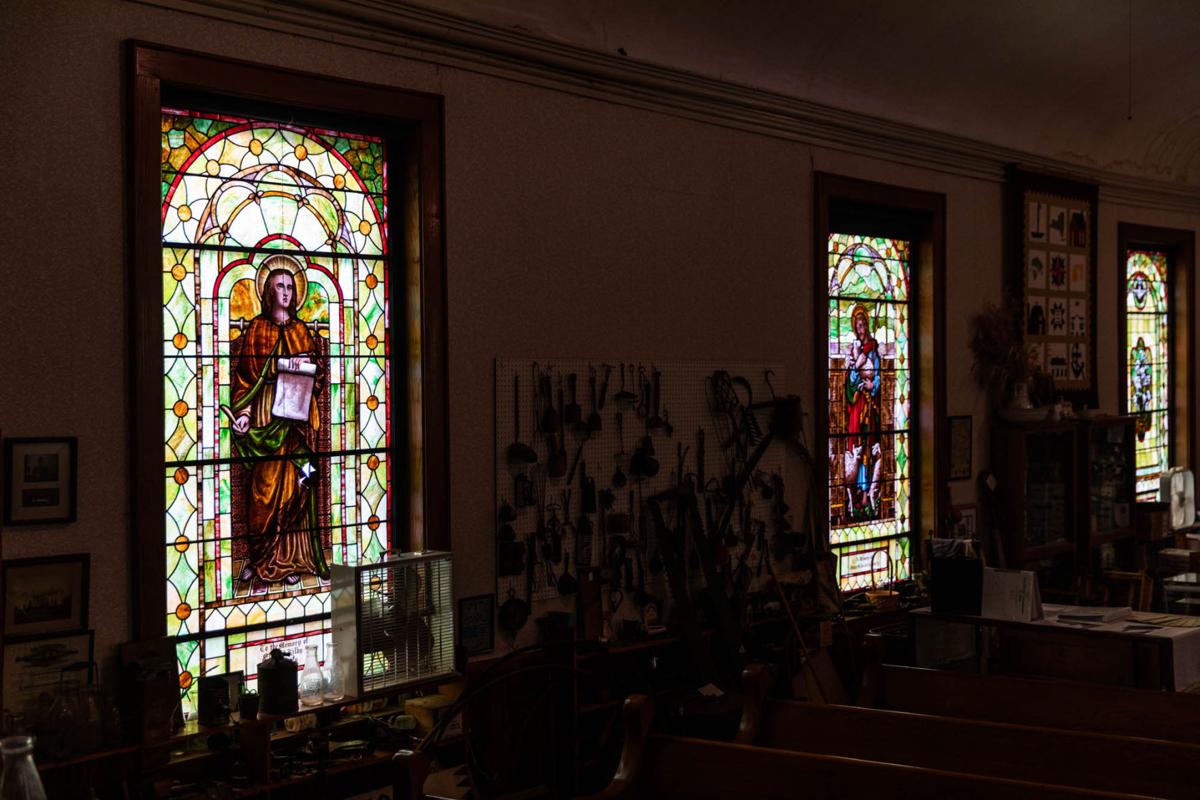 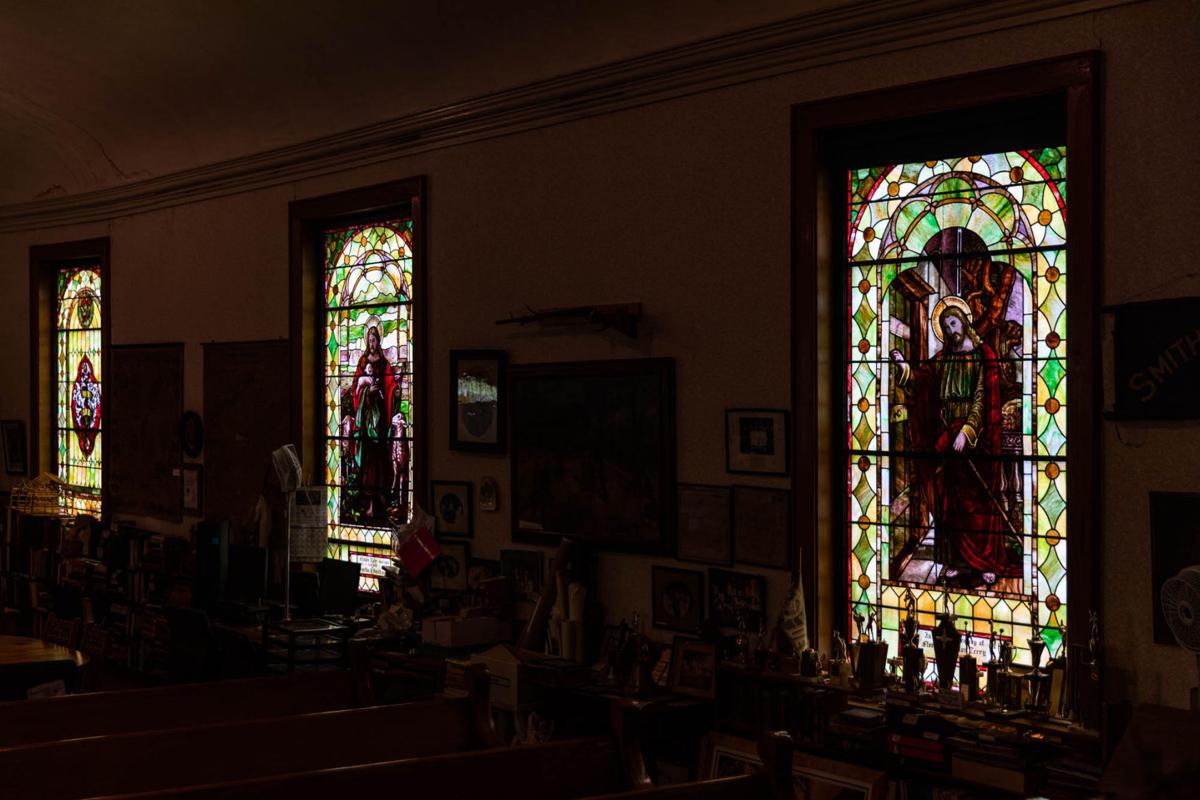 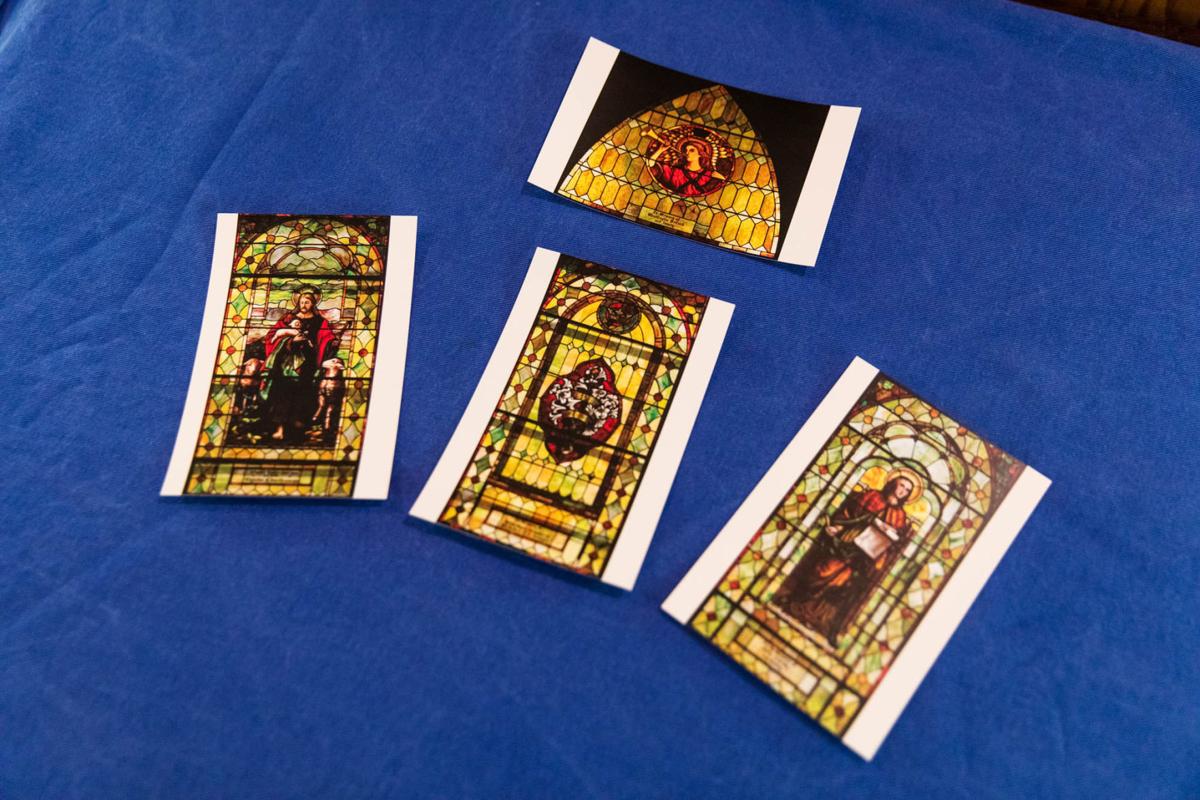 Postcards of the stained glass windows inside the Henderson Historical Society and Museum sit on display inside the society and museum in Henderson. Sydney Schaefer/Watertown Daily Times 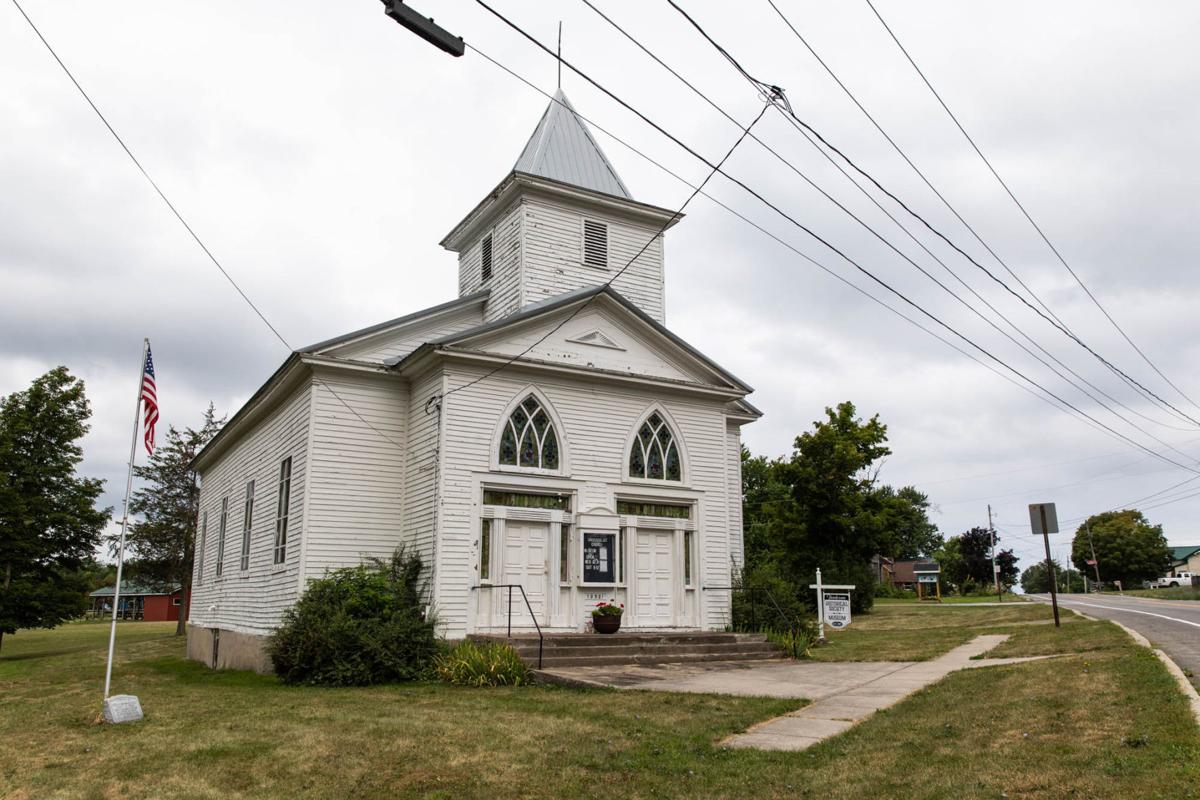 Elaine J. Scott, of the Henderson Historical Society,stands near one of the many stained glass windows on Friday at the society and museum in Henderson. Sydney Schaefer/Watertown Daily Times

Postcards of the stained glass windows inside the Henderson Historical Society and Museum sit on display inside the society and museum in Henderson. Sydney Schaefer/Watertown Daily Times

HENDERSON — A ceremony here Saturday will reflect a universal truth: a promise kept is a blessing.

This year marks the bicentennial of the formation of the First Universalist Society of Henderson. Thirteen pioneers originated the society in 1819, 13 years after Henderson, located in the heart of the Golden Crescent on the eastern shore of Lake Ontario, was founded.

When the church celebrated its 150th anniversary in 1989, Universalist membership had fallen to 25. In 1995, church members donated their building to the Henderson Historical Society where the organization set up its headquarters. The donation revived the historical society, which itself nearly disbanded in the 1970s.

The former building and grounds also serve as a community gathering place, such as the location of the 14th annual Heritage Day held last Saturday. People from puppeteers to historical re-enactors attracted crowds to the historical society’s site at 12581 Route 72 (Harborview Road).

Saturday’s ceremony begins at 2 p.m. Society officials sent invitations to descendants of the former Universalist church, but the event is open to the public.

“The promise was made at the time when the Universalists turned over the building and property to the historical society, that if they ever needed to do a service, memorial, wedding or whatever, they would be allowed to come in,” said Elaine J. Scott, recording secretary and program chairwoman for the society.

Since 1995, former church members, along with their descendants, have taken advantage of that promise. But Saturday’s ceremony takes it to a higher level. The plan was conceived about three years ago to host a bicentennial event to honor the 13 Universalists who in 1819 formed the foundation of their church in the community. The ceremony has roots in a college project.

Matthew E. Johnson, a native of Maryland who later moved to Sackets Harbor, was earning his master’s degree at Boston Architectural College, focused on the former Universalist church as part of a class project that sought buildings with potential for listing on the National Register of Historic Places.

“As part of the class project, I worked with the historical society,” said Mr. Johnson, who graduated from BAC in May of 2018. He now works as a town planner for the Tug Hill Commission.

Harry Horwood left England in the 1860s and eventually settled in Toronto, then moved to New York City in the 1870s. There, he met Cornelius Vanderbilt, for whom he did restoration work. Edward J. Dehors, Martville, owner of Historical Restorations Foundation, has called Mr. Horwood, who settled in Ogdensburg, “one of the greatest glass painters who ever emigrated to the U.S.”

According to Times files, Harry Horwood’s son, Harry J., moved from Prescott, Ontario, in 1893 to Ogdensburg to join his father at his trade.

Numerous “Horwood” windows are dotted across the north country and over the border in Ontario. The Henderson building apparently has two rare, Horwood “signature windows.” The decorative glass borders came from Redwood Glass Co.

The windows, installed in 1909, also feature the names of the prominent settler families in the community. In 1913, two “art windows” were placed over the church doors.

Sparked by the bicentennial, a historical society committee has begun fundraising for the restoration of the windows. Members interviewed four different restorers and have a fundraising goal of $15,000, Mrs. Scott said.

Mr. Johnson said that society members and he have been working with the State Historic Preservation Office for national register status.

“They’ve been advising us as to what we need to add to the nomination and how we can make it better,” he said.

But paperwork was stalled for the past several months.

“The person who we were working with retired, and they weren’t able to replace her with the hiring freeze,” Mr. Johnson said. “We didn’t have a contact for over a year, but they just hired someone new. We’re starting to get back on track.”

Today’s celebration will be a homecoming of sorts for the Rev. David Weissbard of Canton, who will conduct a service.

For many decades, the Henderson Universalist church was served by students from the Theological School of St. Lawrence University in Canton. SLU was originally chartered as a theological school to train ministers for the Universalist faith.

In 1965, the Rev. Mr. Weissbard became the last of the graduates of 109 years of SLU’s theological school. He recalled his student days and heading to Jefferson County to preach.

“We would preach first in Dexter (where that former Universalist church at East Kirby and Brown streets is also now a historical society) and then we would go to Henderson,” the Rev. Mr. Weissard, who retired 12 years ago, said. “If we arrived in Henderson and the sidewalk wasn’t shoveled, we’d just go to the treasurer’s home and pick up our check. It had a congregation that varied from zero to 16. It was clear the church didn’t have a whole lot of future at that point.”

For his sermon at Saturday’s service, the Rev. Mr. Weissbard will give a brief overview of Universalism. He will be joined by the Rev. Andrea Abbott, pastor of First Universalist Church of Central Square, where the Rev. Mr. Weissard guest-preaches once a month. He’s a native of Albany who served a parish for 27 years at Rockford, Ill., and previously served in Bedford, Mass., and Fairfax, Va.

Today, the Universalist church, founded in 1793, is known as Unitarian Universalism created by the consolidation of those two faiths in 1961.

According to a pamphlet on the religion by Mark W. Harris, “Unitarians and Universalists have always been heretics. We are heretics because we want to choose our faith, not because we desire to be rebellious.”

In the north country, Unitarian Universalist churches can be found in Watertown, Canton and Saranac Lake.

But as for the shuttered one in Henderson, where church members are still greeted warmly, Mrs. Scott said, “It’s quite a gift — to be given a church and quite a bit of property.”