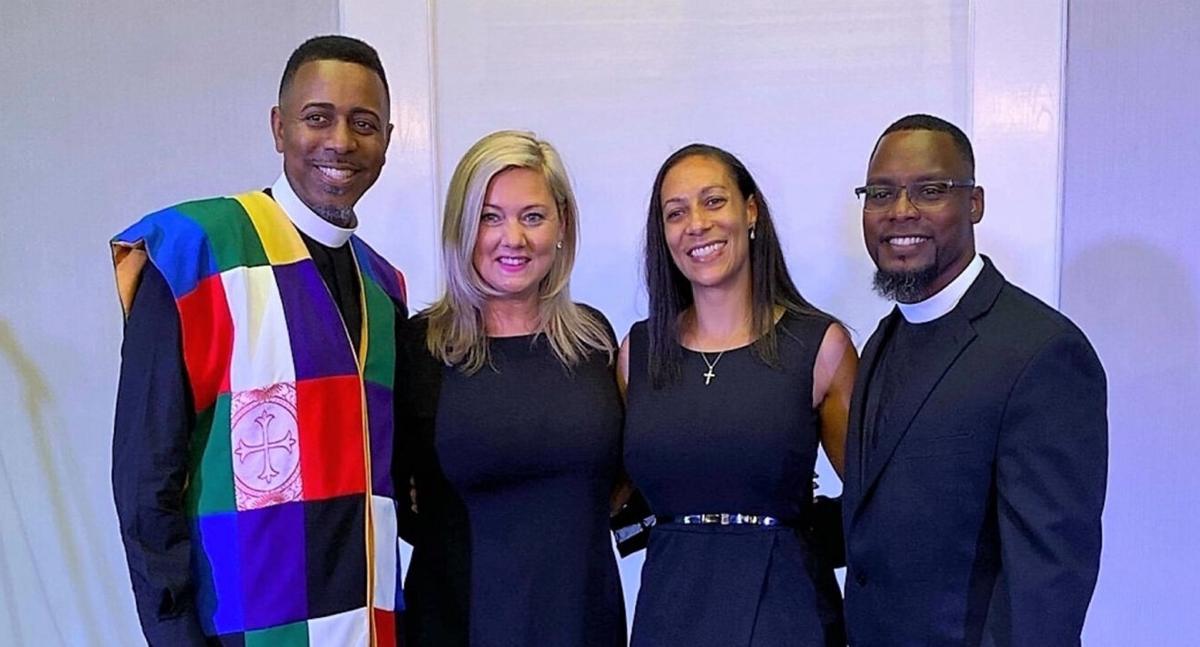 Pastor Myron Jamerson and his wife, Pastor Sabrina Jamerson, left, have moved to North Carolina to begin a new mission of the “Rock” in that state. Derek Johnson, right, has been named transitional pastor of The Rock in Watertown. In center is Mr. Johnson’s wife, Natasha. Courtesy of The Rock Church

Pastor Myron Jamerson and his wife, Pastor Sabrina Jamerson, left, have moved to North Carolina to begin a new mission of the “Rock” in that state. Derek Johnson, right, has been named transitional pastor of The Rock in Watertown. In center is Mr. Johnson’s wife, Natasha. Courtesy of The Rock Church

WATERTOWN — Myron K. Jamerson, senior pastor and founder of The Rock Church, has taken a leap of faith to North Carolina with his wife to quarry a new “Rock.”

“It was our decision,” Pastor Jamerson said of the move made by him and wife, Pastor Sabrina Jamerson. “God just told us it was going to be a quantum leap of faith, but we must trust him. When he says, ‘Go,’ you just have to go.”

“That was the hardest thing I ever had to do — stand before them and let them know that I was leaving,” Pastor Jamerson said in a phone interview from North Carolina. “At our last service, I cried the whole service, because we birthed that church. You work so hard on something, and now, to entrust it with someone and have to leave and go and begin it all over again, that’s a big step.”

Pastor Jamerson, a native of Memphis, held the first service of The Rock Church, now at 24650 Hinds Road, in November of 2011 in the dining room of his Watertown home. He retired from the U.S. Army in 2014 after serving more than 22 years. The Jamersons, who have five children, arrived in North Carolina two weeks ago to begin a ministry of The Rock church in that state.

In March, The Rock moved from its location in the Seaway Plaza to its Hinds Road location.

Pastor Jamerson said he and his wife are looking to set up another nondenominational church in either the Durham, Chapel Hill or Raleigh area.

“We’re going to start online,” Pastor Jamerson said. “The name of the new church is Rock City. As COVID begins its decrease, we’ll begin to look more and more for a building to move into.”

The Jamersons purchased a home on Woodruff Settlement Road in Watertown, but only had it for eight months before deciding to move on. It was sold at the couple’s offering price before it was advertised, the pastor said.

“That was one of our confirmations that doors were opening up,” Pastor Jamerson said.

Mr. Johnson, interim pastor at The Rock, has been part of the church’s ministry for two years.

“In those two years, I’ve seen a lot and seen the church do a lot,” he said.

Mr. Johnson retired from the Army in 2017 after a total of 27 years in the service, consisting of five years in the Army reserve and 22 years active duty. He retired as a sergeant first class. He and his wife, Natasha, decided to stay in the Watertown area after he retired.

“We like the pace,” Mr. Johnson said. “We figured with everything else going on around the country, this is a pretty decent spot. We’re here until God says otherwise.”

Like other parishioners of The Rock, Mr. Johnson said he was surprised when Pastor Jamerson announced he was moving on.

“It was settled in his mind that Watertown was going to be the place where he grows old,” Mr. Johnson said. “But God saw differently for him to move.”

But Pastor Jamerson, Mr. Johnson said, is still senior pastor at The Rock.

“I’m taking it day by day,” he said. “Whatever Pastor Myron’s vision for The Rock church prior to him leaving will continue to go on. We’re still doing community-based things, but with COVID, we’re a little restricted as to what we can do.”

The church operates The Rock Closet at 139 JB Wise Plaza. The thrift store is open to the public from 10 a.m. to 2 p.m. Thursdays. Everything at the “Closet” is free.

The Rock Church also hosts an annual “A Day in the Community,” in which it offers clothing, household items and services for free to the public.